In the next couple of weeks, you are going to see and hear a lot about this figure. Some people will love it. Others will hate it. Many, many more will complain about the manner in which the sale of this figure was dictated by Hasbro. To me, all of that will be inconsequential. Why? Simple. I had the opportunity to get another classic repaint for my collection. When it all comes down to it, that's what I want. It is figures in this style and this articulation that are the basis for my Joe collection. Any opportunity to acquire another new figure like this is welcome. As such, I present to you my take on the latest Cobra army builder: the Shock Viper.

Like just about every new figure that has been produced since 2000, the Shock Viper's filecard sucks. If they wanted to make them flame throwers, they should have just used the original Incinerator mold and code name. As such, in my collection, the Incinerators will remain the only Cobra flame throwers. With that firmly in place, I was left with the problem of what to do with my Shock Vipers. The mold, originally used on the infamous Ice Cream Soldier in 1994, is excellent and is of a color scheme that just begs me to use it. However, they don't fit the traditional military soldier role that are so well defined by other Cobra Troopers. They are also not conducive for use in urban settings either. What, then, was I to do with this new, cool figure?

The more I thought about it, this guy's purpose finally hit me. With a name like Shock Viper, he needed a function of some importance, but also some mystery. What better use for a Shock Viper than as Cobra's internal police? I always figured Cobra to be chock full of people of incredibly shady character. As such, crimes against their own would be rampant. Cobra would need some sort of internal police force that would keep their own members in line. As I thought about this function for the Shock Viper,though, it dawned on me that this guy seems a bit more elite than a base security trooper would be. Rather than making them the base police force for Cobra, I envision these guys as more of a secret police force. They are a gestapo who serve at the will of Cobra Commander or his cronies. They help keep the Commander's political enemies at bay as well as gather intelligence about his rivals.

As with most of my figures, though, I foresee these guys being less loyal to the Commander than they are to the character portrayed by the Flying Scorpion figure. I see these guys acting as his personal police force who will ensure that his rivals don't get the opportunity to plot against him. Like most people with large egos, this character has just taken another step towards what will either be total achievement of his goals, or complete and utter failure. In the long term, I actually see this figure taking the role for the Flying Scorpion that the Funskool Desert Scorpion plays for Cobra Commander. They will be his personal bodyguards as well as the secret police. If you are not a member of his small cabal of commanders, then the Shock Vipers are not a group of people you want to see!

There are a lot of rumours and innuendos circulating about this wave. I wish I were in a position to debunk them, but I'm not. Time will be final factor in determining the extent of these figures' popularity. In the short term, though, Hasbro did not have any major retailers who wanted to purchase this wave of figures. This was mainly due to the fact that the new Joe vs. Cobra resculpts were already available. (I still think these were rushed to the shelves post Christmas so that Hasbro could get Episode II figures into production.) Without major retailer support, this line was doomed. Fortunately, online retailers stepped up and kept this wave from being cancelled. That meant that while collectors got an opportunity to buy this wave, it also provided a chance for scalpers and speculators to swoop in on what they perceive will ultimately be a valuable wave of figures. As such, you will find people charging (and paying!!!) outrageous sums of money for these figures. Once the full production run is out in the market, though, I don't think the prices will stay that high for long.

I'm sure this is the part you've all been waiting for: this figure's availability. I will be blunt. If you are currently paying upwards of $25 for this figure MOC, you are an idiot. That is the bottom line. At least two major online retailers who are stocking this wave have yet to receive their shipments. After they have gotten their figures, mailed them out, and ensured they are, indeed, out of stock, then you might start to get a little nervous. Personally, I think that you should wait until at least May before you panic if you don't yet have these figures. As anyone who attempted to order these figures from SmallJoes.com on Feb. 15th knows, there is a high demand for these guys. You can be sure, though, that the demand is fueled by the perceived scarcity of this wave. When all is said and done with this wave, I imagine that it will have been produced in greater quantities than many other figures from even the vintage line. It will be the fault of speculators and hoarders if an amount close to the full production run doesn't make it to the collectors who want them. In the end, though, the stigma of this wave will always persist. As such, they will, most likely, remain as some of the most expensive members of the repainted Joe club. It is unfortunate, but, if you are informed and know where to look, I think these figures will be available in the future. Speculators lose money if they hold something too long and hoarders eventually have to sell. When they do, I think the opportunities to acquire these figures for reasonable prices will be there.

I like the Shock Viper. His purpose in my collection also lends itself to a smaller number of them. Still, I would like one or two more. If you have any Shock Vipers you are willing to trade, email me. 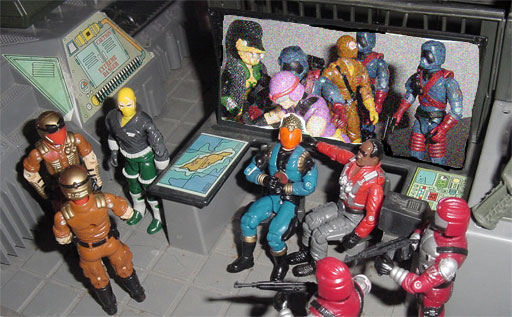 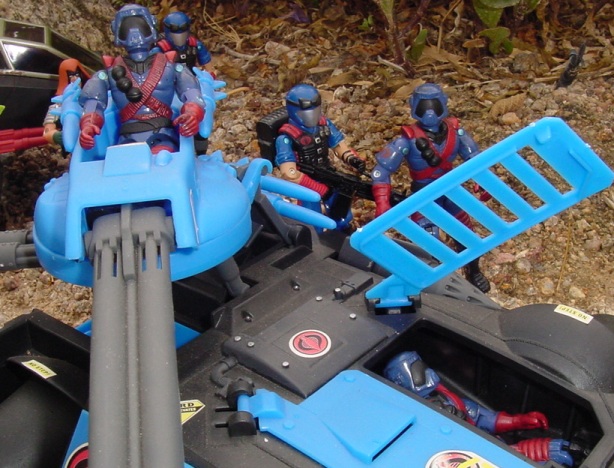 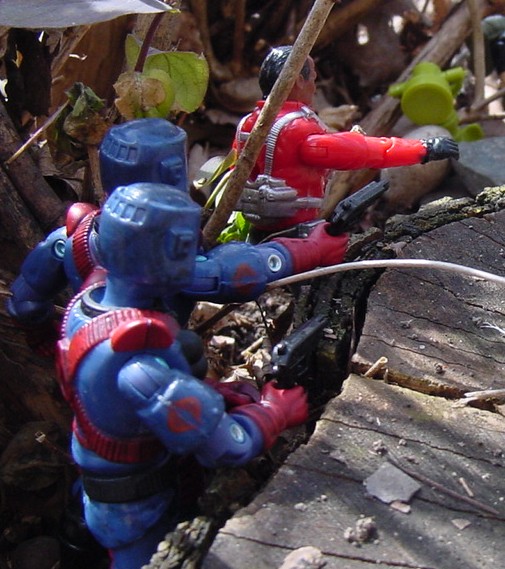