When I started this site many years ago, my main purpose was to give a little exposure to figures from the line's later years that collectors tended to pass by. As time has gone on, though, many of those once hidden gems at the end of the original line have become discovered and have started to become important parts of many people's collections. As the site has grown, it has become harder and harder to find seldom mentioned figures from any year. Every now and then, though, I do come across a interesting little footnote to Joe history. Often, these figures are nothing interesting save for their relative scarcity. Such is the case with the subject of this profile: the 1993 T'Gin-Zu.

T'Gin-Zu is one of the most obscure characters in the entire line. Released in 1993 as a vehicle driver, he is not a common sight in most collections. For years, I thought he was a Cobra. It wasn't until I added him to my collection that I realized T'Gin-Zu is a Joe. Not that it much matters. This Ninja-Force mold is hard to use as he lacks much of the articulation that makes Joe so familiar. Add to that the fact that his details are orange and blue and you can see why not too many collectors really care about the figure. About the only thing that keeps this figure from Crystal Ball or Big Boa status is the fact that he is actually very hard to track down. Aside from his scarcity, though, there is nothing notable about the figure. He is a terrible figure that came out in a year of bad figures. Hardly a mark of greatness.

If T'Gin-Zu's mold looks familiar, that's because it is. Originally used for the 1992 Storm Shadow, this mold has since been used far too many times for it to ever have any relevance again. After the original use, the figure was repainted as Storm Shadow in the Shadow Ninjas subset in 1994. The body, though, was also used in the Street Fighter subset for 2 version of Ken Masters. In 2000, the mold was modified to O-ring construction and used for a re-release Storm Shadow figure. Had it stopped there, this would have been enough. However, Hasbro, in their infinite wisdom, kept using the mold. It appeared again in 2002 as Storm Shadow in an 8-figure gift pack. It was then slated to appear in the ill-fated Wal-Mart exclusive Sky Patrol figures. In fact, samples of this figure have become ubiquitous on the second hand market. (This is due to the fact that Hasbro did not pulp the cancelled figures the way they normally do. Instead, they spray painted over them and tossed them in a dumpster. Enterprising garbage scavengers were then able to piece together good figures from the multitude of parts that managed to avoid the paint.) Finally, this figure is now set to appear again in 2004 as part of the Cobra Urban Assault set. This mold has been over-used to badly that any appearance of it is now met with serious derision. Hopefully, after the 2004 release, we will never see this mold used again. Anything less than a total retirement would be a slap in the face to collecting community.

The entire concept of the Ninja-Force could have been well-handled. By 1992, Joe was in a downturn and there wasn't much anyone could do to stop it. While many collectors blame gimmicks and bright colors as reasons for the original line's cancellation, the fact is that Joe had run its course. By '92, Joe had been available at retail for over a decade. After that long, kids were just ready for something new. Thus, to attempt to attract new customers, Hasbro turned to the ideas that many associate with the line's fall. (Interestingly enough, the same scenario is now playing out in India with the Funskool G.I. Joe Line. But, more on that in a future profile.) At any rate, the Ninja-Force was one of the gimmicks that was tried. The figure designs in the subset are actually acceptable. However, the changing articulation and added "ninja-action" features fell flat and ended up ruining what could have been a decent set of figures. Ninjas, though, remained a popular theme in the Joe line through '94. And, despite a bit of anti-ninja sentiment among adult collectors, they remain popular today. As such, if you collect Joes, you really have to accept ninjas.

This leaves me with what to do with this figure in my collection. I don't use any ninja figures on a consistent basis. From time to time, I pull one out as a random assassin, but I have little regular use for them. To me, Joe is a military toy line first and foremost. As such, it is the military figures that I tend to use most often. Even back when Shadow Ninjas were readily available at retail, I passed them by knowing that they would get little use in my collection. Nothing has changed today, though I do enjoy having many of the later ninjas as they do have decently sculpted weapons and do look good on display. In that vein, T'Gin-Zu fits into my collection. Beyond that, though, his uses are severely limited.

T'Gin-Zu figures are actually quite hard to find. He was released as a vehicle driver during a time when vehicles saw very low production runs. Unlike many of the more traditional 1993 vehicle drivers, T'Gin-Zu figures were never available en masse as overstock. So, modern collectors are left with a tough figure to track down. If you can find them, though, they aren't too pricey. Mint, complete specimens should be had for under $15 and can be gotten much cheaper from time to time. However, as more collectors move towards being completists, I could see figures like T'Gin-Zu becoming more desirable. He will be a common gap in many collections and there could be some competition for any nice specimens that come available. I don't think he'll ever rival earlier drivers in terms of price or collector desirability, but I could see this figure being one that many people will be missing from their collections. 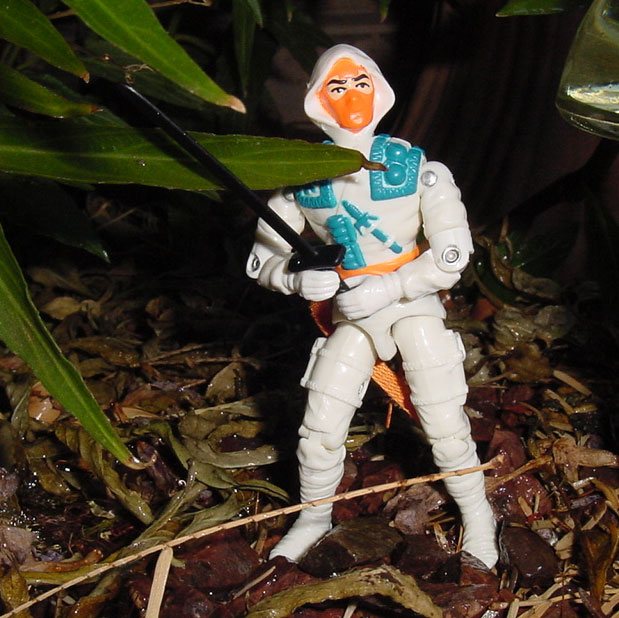 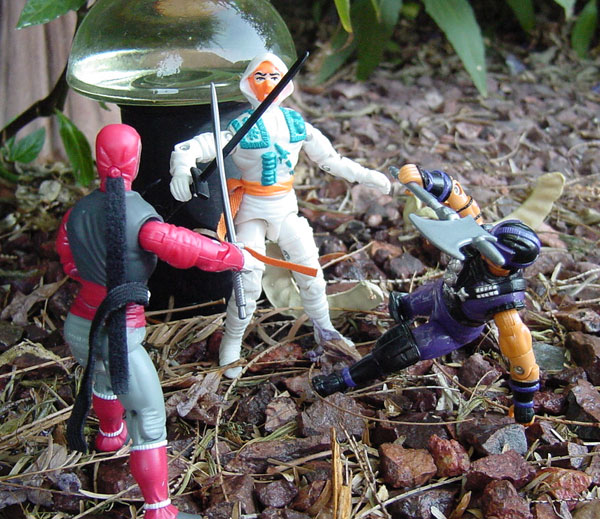