In the early '90's, I was mostly out of Joe. I picked up the comics every couple of months. But, for the most part, I was not heavily involved. However, one comic cover grabbed my attention. It announced the death of several Joes. Naturally, I had to get this issue to see which characters were going to bite the big one. My feeling was that many of the newer, less developed characters were going to be killed off. How wrong I was! While I didn't mind the demise of Quick Kick, the deaths of Heavy Metal and Crankcase were not ones I wanted to see. Even those, though, made sense as neither of those characters was a major player. The deaths of two characters, though, made me somewhat angry. Both of these characters were ones I had grown up with and were people I considered integral to the Joe team: Breaker and Doc.

Doc was the Joe team's doctor. While later characters like Lifeline and Stretcher had medical specialties, there was never another M.D. added to the Joe team. (As an aside, I think that Stretcher might have originally been intended as a new version of Doc. In the design process, though, some things changed and Stretcher was changed to a unique character.) The lack of a doctor was a glaring hole in the team, but it did allow for Doc to be a part of many story lines. As such, Doc remained prominent in the comic for years after his figure had been discontinued.

One aspect of Doc that I have always felt was overlooked was his background. Doc is a Harvard educated M.D. who also trained at Johns Hopkins. He was one of the brightest and most talented medical professionals in the world. That would mean that he was probably capable of earning well over a million dollars per year in private practice. Why would someone who was successful leave behind the promise of riches to enlist in the military? Doc's calling must have been an incredibly noble nature for him to serve his country in this capacity when he was capable of such potential personal gain. This was one of the hallmarks of the early Joes. For every backwoods country boy or urban gang leader, the Joe team also had some highly educated and very successful people. (General Hawk was from an affluent family. For him to sacrifice his family legacy and put himself in harm's way shows character similar to Doc's.) With so many collectors focused on Cobras these days, it is easy to overlook the patriotic heroism of so many of the Joe characters: not just in their roles as Joes, but also in what they gave up to serve. In light of current events and with the upcoming Memorial Day holiday, that is something for people, especially those of my generation, to think about.

One of the things that has kept the Joe line so powerful an influence among so many people my age is the depth of the stories that were created for the line. Regardless of how you feel about his writing, it is impossible to deny that Larry Hama had a lot invested in the Joe characters. That commitment to the characters carried over to the comic and helped to create enduring characterizations that persist until today. Aside from that, the people at Hasbro really seemed to put a lot into the Joe line. The figures were carefully crafted and designed to showcase specialties in a figure's appearance. Even the cartoon gave figures characterizations that made them identifiable. That is why there is still such a strong fan base over 20 years after the line was introduced.

That being said, though, I think that this magic has been gone for some time. The current people who work on the Joe line and Joe media do not seem to have same level of emotional involvement with the line. The lack of passion shows through and has, in my opinion, somewhat tarnished the legacy of the original line. The Joe story line now is rather haphazard and lacks the defining themes that permeated each layer of the original line. As such, I do not think that today's Joe line is generating anywhere near the same level of interest among children that the original line did so many years ago. While some may say that the toy world has changed, I feel that is a bit of a cop-out. There are still toy lines out there (Power Rangers!) that have been popular for a long time and have ingrained themselves into a generation of children. It can still be done. However, it can not happen if the powers in charge of the line lack the vision to make it happen.

If you look at many of these early figures, a simple glance often gave you a window into their specialty and personality. One need only look at Doc to determine he is a medic. You knew that Gung-Ho was a badass by seeing his tattoo. Now, many of the figures are relatively non-descript. While a few have the characteristics of their ancestors, most of the figures showcase details for the sake of details and lack a real sense of purpose in their design. You knew that Recondo had a machete molded onto his legs because he was a jungle trooper who would need one to cut through brush. However, when I look at a Cobra Coils, I don't know that he's a motorcycle trooper. I can see it when I read his specialty, but his design does nothing to promote his purpose. (That isn't to say he's a bad figure. The figure itself is very cool.) I've been trying for a while to put my finger on what I think the new Joe line has been lacking. I think this sense of ownership of the concept is the problem. Those currently involved with the line did not have the experience of creating this idea from scratch and then watching it grow and mature. They took over a concept that had proven successful in the past. Rather than run with some new ideas to give the line something close to its old life, they simply tried to recreate the past. While I like homage figures and stuff like that, I think that more effort could be put towards the Joe line as a whole. The line needs someone with vision to step forward and take ownership of the entire concept, put it to paper, and follow through with the implementation of the plan. Without that, I fear that this new Joe line will simply become a footnote to a great part of action figure history.

The Doc mold was a world traveler. After his American release, Doc made his way down to Argentina. From there, he was also released in Brazil and Mexico. (As an interesting note, those Doc figures were released with Blowtorch's arms.) After that, though, the trail runs cold and Doc has not been seen, in any format since then. However, many of Doc's parts were also used for the V1 Duke and a number of other figures that were based on that mold. Also, around the time Doc was first appearing in South America, he was still being released by Hasbro as part of a special bagged figure set. It could be that these were simply overstock figures. However, the trail of parts seems to indicate that there must have been more than one Doc mold. I've long suspected that many figures, especially those made prior to 1986, had more than one mold. (In fact, you can see evidence of that in the recent Night Force Flint figure.) As such, it is possible that even with Doc's use in Brazil that Hasbro could put the mold together and re-release him. Unfortunately, that would probably require a lot of tracking down specific parts that are probably parceled with other figure molds. It could be done, but is something I would consider to be unlikely.

Doc figures are rather easy to find. Just about everyone had a Doc back in the day. As he was a non-combatant, many of the figures did not receive as much use as other, more militaristically inclined Joes. This means that many mint, complete Doc figures survived to this day. I will say, though, that both his stretcher and his gun are often found broken, even if the figure in in immaculate shape. This means, though, that Doc is still affordable to the few collectors who have not had their fill of the figure. That's good as it means that a figure I consider to be an important part of a collection is available to those who want him. 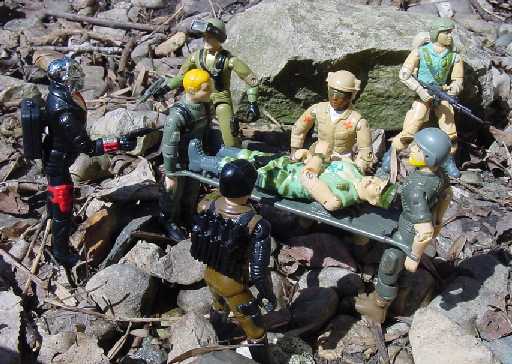 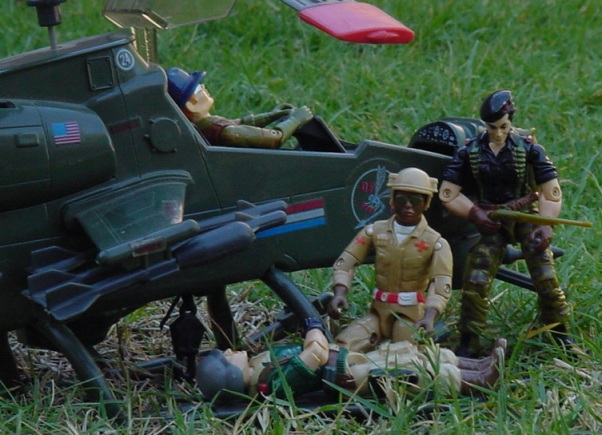 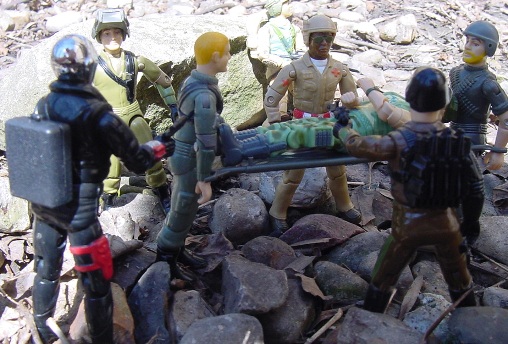 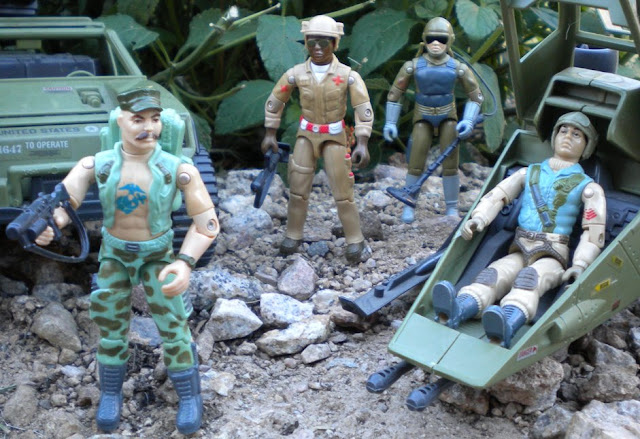