I've already profiled two other figure versions of the Major Bludd character. For some reason, though, I feel that I have yet to adequately describe the true importance I place on the Bludd character. As such, when the opportunity to profile a newer version of Major Bludd arose, I embraced the chance to revisit one of my nostalgic favorites. The fact that the figure is actually true to the character's roots and maintains the definite feel of a Bludd figure was just a bonus. (Especially when you consider that this figure was created by Funskool!)

When I first heard that Funskool was offering a new Major Bludd, I figured it would be a newly painted version that utilized the 1994 Major Bludd mold. The reasons for this included the fact that the original Major Bludd mold was previously released by Funskool back in the earliest days of their Joe line. (In fact, the blue and yellow version of this figure is among the harder foreign releases from any country to find.) Major Bludd would not be categorized as a new figure were it this mold. With this mold ruled out, I thought about the '91 Major Bludd mold. However, this mold was just used in 2000/2001 in the U.S. for a Major Bludd figure. As such, I didn't think it could be used again by Funskool so soon. This left only the 1994 mold, and I thought that this could be a possibility. However, this was not the case. When the first pictures of this figure appeared, many were shocked to see it was the 1991 Major Bludd mold. People could not believe it, especially in light of Hasbro's statements at the convention to the effect that they were anticipating this Major Bludd mold to be a part of the upcoming Python Patrol exclusive pack. However, shortly after the Joe con, there was another public appearance by the Joe design team. At this event, they let an off-hand comment slip about how they had shipped the original Outback mold (that was just used in 2001 for Big Brawler) to India. This indicated that Hasbro is still sending Funskool newly used molds. While some may question why, it is important to remember that at the end of 2001, Hasbro was going full tilt into the production of the new Joe sculpts. It was only collector backlash that has kept classically sculpted Joes around. With Hasbro's mindset that the old molds were no longer useful to them, it makes perfect sense that they would have sent some recently used molds off to India. What does this mean? Well, it means that just because a mold was used in the U.S. in the past few years does not, necessarily, mean that it is still available for Hasbro produced figures. It also means that there could be some more very interesting offerings from Funskool next year.

If you are a fan of classic Joes, Funskool has really put out some nice product for you in past year or so. We have seen excellent repaints of Scrap Iron, Zarana, Buzzer, Ripper, Quick Kick, Zartan, Flint, Airtight, Beach Head and the Crimson Guard Immortal. This version of Major Bludd just continues in this vein. He is a perfect homage to the original figure's colors without any of the minuscule Funskool trappings that you usually find on their figures. (Okay, his accessories are terrible. The translucent hot pink and neon purple guns are among the most useless weapons ever offered.) The brown color is a bit lighter than the very dark 2001 version and showcases the mold details much more clearly than the dark blue and brown from the American versions of this mold. The lightening effect really accentuates the high level of detail that was originally paid this sculpt. While I've long used the '91 Major Bludd figure, I only noticed that this mold carried forward Bludd's trademark dog tags when I saw the Funskool version. The darker American versions hid little details like this from cursory examination.

For me, Major Bludd has always been the most ruthless of the Cobra villains. While Cobra Commander is evil personified, he never struck me as the type who would muddy his hands with the actual dirty work of a terrorist organization. Instead, he would employ a number of henchmen who would not be mindful of tasks such as these. While Destro was a bit above this type of thing, Major Bludd struck me as the man the Commander turned to when he needed something horrid done. (And this was even before Bludd's memorable run as an assassin after Snake Eyes in the original Joe comic run.) I pictured Bludd as the down and dirty task man who was responsible for the dark dealings of Cobra. Being an independent contractor, he is able to operate without implicating Cobra while still utilizing their full resources. With the power of Cobra behind him, I always envisioned Bludd as being one of the most ruthless and dangerous people on the planet.

In my collection, though, Bludd's role has evolved. As is normal with many contractual relationships, Bludd and Cobra Commander eventually drifted apart in their goals. Longtime fans of this site know that my Cobra Commander has aged a bit and is no longer really a part of the day to day operations of Cobra. As the Commander settled into his reduced role, Bludd found himself somewhat of an outsider. Rather than become embittered at the Cobra organization, though, Bludd went off to further hone his skills in hot spots throughout the world. However, the finite number of countries that Bludd could still travel to dwindled rather quickly. Plus, my Bludd has aged a bit and no longer has the desire to be a two bit foot soldier. As such, Bludd set up offices in the U.S. and Canada and has been partaking in a number of illicit activities within those countries borders. While not the overt mercenary he was in his younger days, Bludd still hires out his skills. However, he acts as more of an organized crime boss rather than an assassin. In this role, he has taken over the remnants of the Headhunters and turned them into his private army of mercenaries. They often help Cobra (Especially now that Cobra is starting to mount urban military strikes against American civilian locations.) as Cobra has the money to pay well. However, the days of Bludd being Cobra Commander's crony are past.

This figure's availability is problematic. Currently, he is readily available for under $4. However, that could soon change. If the ban on large scale Funskool imports is implemented, newer figures, like Bludd, could become harder to get and more expensive in the U.S. For now, this "ban" seems to have little impact besides create a short term demand for some of the better Funskool figures. Time will tell how this plays out. However, you know that you aren't going to find this figure for much less than $4, so if you have a chance to pick one up now, I would certainly take advantage of it. In the long term, I think this figure could remain popular. Bludd is a major Cobra character and this color scheme is well done and hearkens to the original figure. Had the '01 Major Bludd not been released in the U.S., I think this figure would rival the Chinese Major Bludd as a collector favorite. Now, though, this guy is a just another great addition to a Major Bludd collection. I've found him enjoyable and will probably continue to use him over the similar American version from just over a year ago. Again, time will tell if this figure ever gains high levels of popularity. However, as this guy is not the only alternative for a good, later sculpt Major Bludd figure, I see him remaining a relatively obscure representation of the Cobra hierarchy.   Is Major Bludd a character you would like to see remade in the new sculpt figures? Let me know. 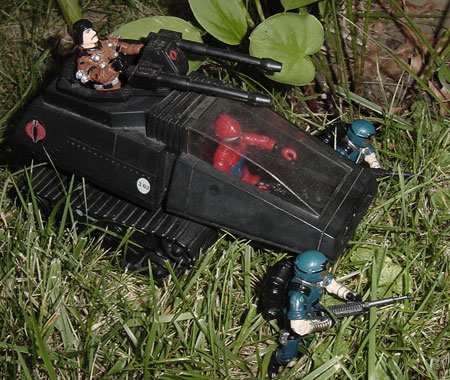 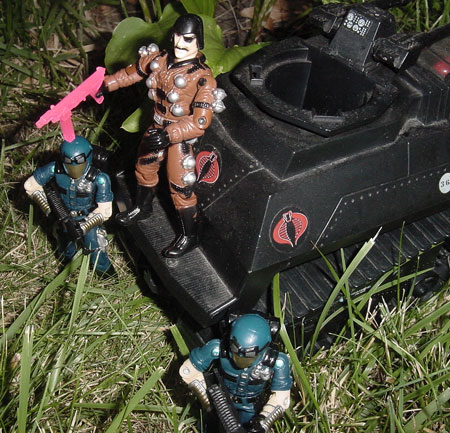 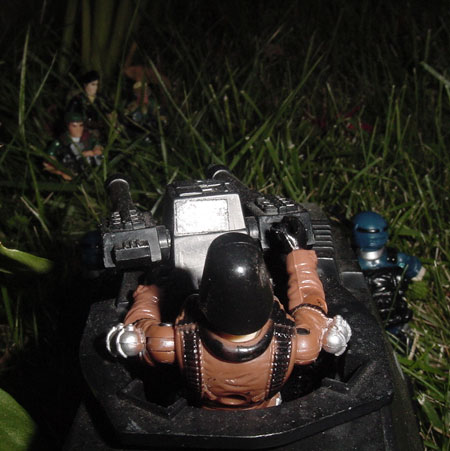 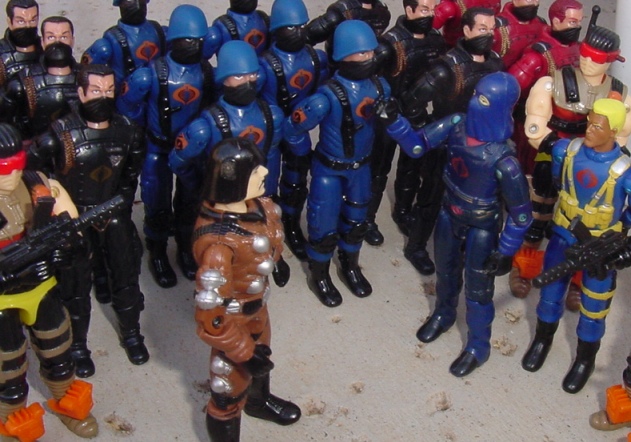 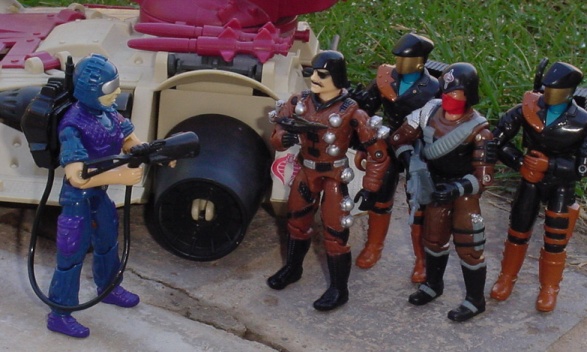 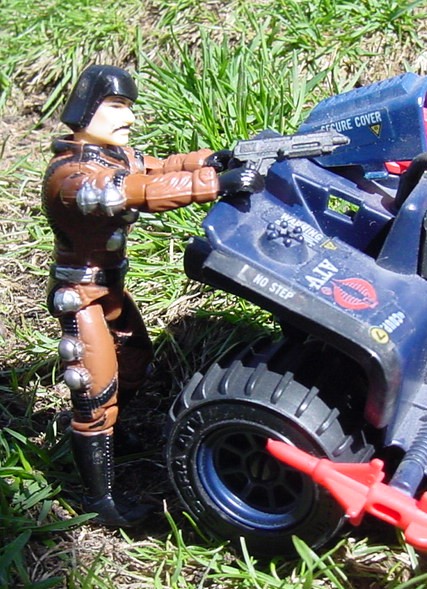