Back in September of 2001, I profiled the original Incinerator figure. At the end of that profile, I mentioned that I would like to see this mold used again, even if it was by Funskool. Well, I got my wish! At the time, I made my prognostication based on the fact that Funskool had pulled a lot of 1991 molds out of the warehouse and put them into production. It only made sense that they would likely have the Incinerator mold. Fortunately, the figure they finally released was not too "Funskooled" out and makes a nice addition to a Cobra army.

As I said in my original Incinerator profile, I use these figures as supporting troopers. They are called into situations where typical Cobra infantry has run into trouble and needs the Incinerators specialty. However, I have felt that the notion of a flamethrowing soldier is a bit out dated. Even the best protective gear will not save a poor soul whose pack full of highly flammable fuel is set ablaze by a stray bullet or shrapnel. As such, the job of setting something on fire is left to fearless BATS. As I still like the Incinerator mold, though, I have found other uses for them. Their color makes them less useful as gunners, but they do work well with Alley Vipers and I often mix the two together. Incinerators carry HEAT Viper weapons (as they are readily available from many 2002 figures) and serve as heavy weapons soldiers in support of the Alley Vipers. From time to time, I also use them as a subset of the Toxo-Vipers whose suits are a bit more protective. I could also see them filling as pilots in some of the newer Cobra aircraft. Really, the mold is versatile and can be adapted to many uses. This is a feature I really look for when I'm assessing a figure's value to my collection.

In my view, one of the areas where Funskool most helps American collectors is in the area of non-standard army builders. American collectors have been feasting on the overkill of Viper and Alley Viper repaints for the past year. As such, many people have been able to build nice Cobra armies, though only of a few figure types. This isn't a bad thing, but, if you are like me, you want at least some diversity. While the Python Patrol set from earlier this year helped that some, there really hasn't been any other alternative for some non-standard Cobra army building figures. This is where Funskool has played a major role. Their offerings of Night Vipers, Toxo Vipers, Crimson Guard Immortals, Eels, Hydro Vipers, Desert Scorpions and Incinerators have given the American collector a chance to build his Cobra army with some different figures. In just about every case, these figures are similar to their American counterparts and fit into an American collection with few problems. Going forward, I hope Funskool continues in this role. I don't want to see them focused primarily on army builders, though I doubt that would happen as all the American Funskool sellers combined do not even sell one day's worth of figure production for any one Funskool mold in an entire year, but I would like for them to continue to offer alternatives to the traditional American releases. In this capacity they can be very beneficial to American collectors and will serve as another way for us to supplement our collections as Hasbro moves away from producing a diverse selection of ARAH-style figures.

Soon, Incinerators will be everywhere. You can get them from all of your favorite online Joe dealers for about $5 or so. To me, this is a great way to supplement my Cobra army. I don't ever see myself having a dozen or so of these guys, but I could see myself ending up with 4 to 6. The nature of the Incinerator makes him more prone to smaller quantities in collections. But, as he is one of the few non-standard army builders out there available at retail, I could see me ending up with more of them as time progresses. As I usually do, I really like this latest offering from Funskool. He is of near Hasbro quality and is quite a change from the typical perception of Funskool figures. In this case, the figure is similar to the American version and blends perfectly with any of those you might already have in your collection. If you've been wanting to check out the new higher quality Funskool figures but have been put off by the likes of Grunt and Big Brawler, you should really try the Incinerator. He is a well done figure that makes an excellent addition to any Cobra army. 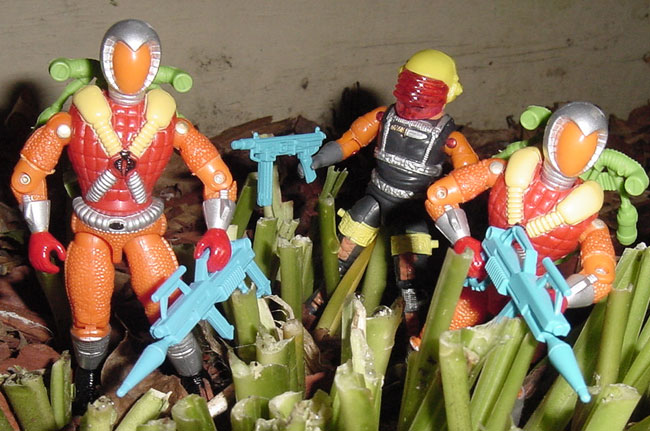 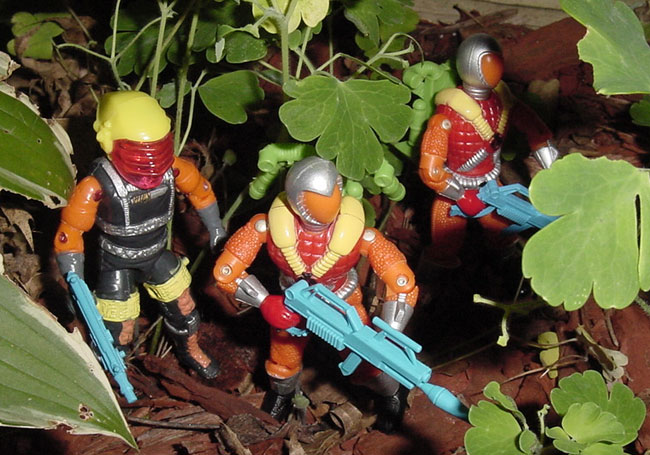 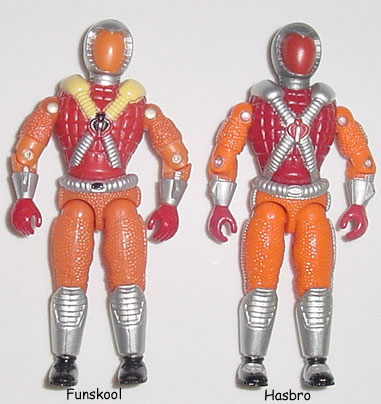 Posted by Robot_Sonic at 1:00 PM No comments:
Email ThisBlogThis!Share to TwitterShare to FacebookShare to Pinterest
Labels: 2003, Foreign Figures, Funskool, Incinerator

Recondo was a later addition to the Joe storyline. While he made his initial appearance in the Joe comic in late 1984, he did not get his own storyline until the summer of 1985. But what a storyline it was! As a youngster, I was enthralled by Recondo's comic appearance. The idea of a small team of Joes really played out well. The story showcased how the Joes could work together with their environmental specialist as the lead. The next year, Marvel launched a whole new comic, G.I. Joe Special Missions, to better explore stories like this one that could exist outside of the main comic's focus. While I never really felt that Special Missions captured the magic of those Recondo issues, it did heavily influence my play. Before, I usually had all my Cobras attacking all my Joes at once. After reading the Recondo issues, I started using my figures a bit differently. I divided my Joes into smaller, more specialized units. From here, I was able to develop my own characterizations of certain figures more deeply as they had to face greater odds under mounting pressure. My feeling is that this really allowed my creativity to flourish as I moved beyond describing a situation or action to actual character development. In looking at my Joe world as it exists today, many of the characters who have been around for some time have their characterizational roots in the story lines I proffered forth in the mid to late '80's.

Today, Recondo sees little use in my collection. I feel that he has been surpassed by many figures who came after him. While his cammo and accessories are okay, they don't measure up to the jungle busting saw that came with Pathfinder, the pack with removable knife and antenna that Falcon used or web gear and strapped gun that were the hallmarks of Outback. This has left Recondo as kind of a forgotten member of my Joe ranks. Even on jungle missions, he is passed by. On the rare occasion when I do pull him out, though, I am quickly reminded why he never really struck a chord with me. While Recondo's gun looks cool, I've always felt that it looks awkward when held by the figure. This prevents Recondo from being posed in ways that are conducive to play. I've just always thought that the entire mold looked a lot better than it played. Recondo has a stocky chest and arms. These don't allow the entire range of movement you find on other figures. While not something you overtly notice, it is something that, to me, held the figure back. I think that the idea of Recondo is a lot more fun than his actual figure.

The Recondo mold has had a long history outside of the U.S. Aside from its two releases here, Recondo was also released in Brazil. The timing of this release is odd, though, as the Brazilian figure appeared around 1986, in between the American releases. At some point in 1987 or so, Hasbro produced a short run of Starduster figures that used Recondo's chest. This was quickly changed to the more common Duke chest, though. It stands to reason that Hasbro lent this mold to Estrela for use in Brazil, but then reacquired it in 1987 or 1988 to produce the American Tiger Force figure. It could be that the short production run on the Recondo chest Starduster was Hasbro's way of testing the mold after it's return from Brazil in an effort to assure that the mold would still produce figures that were in compliance with American toy safety standards. This is even more peculiar since Hasbro wanted to use Wild Bill in the '88 Tiger Force. If Hasbro could not re-acquire the Wild Bill mold, how was it that they were able to get Recondo back? This is one of those little mysteries that is probably long lost and will never be fully explained. Aside from this, though, Recondo was also being released in Europe in his Tiger Force colors. This, in and of itself, is not all that odd. However, Recondo was called Wild Bill. The European Tiger Fly included a figure of the Tiger Force Recondo mold and color, but was named Wild Bill. After all this, though, Recondo's mold disappeared and has not been seen since. It could still be under Hasbro's control or off in India.

I think, as a character, Recondo had great promise. However, as the Joe team expanded, the more specialized Joe members could no longer be given the spotlight for more than an issue or two of the comic or an episode of the cartoon. Even by 1985, the Joe team had grown to the point where specialties were repeated and older characters were updated. While the large size of the Joe team allowed for greater popularity as it offered something for everyone, it also meant that the lesser characters got neglected in mainstream Joe media. This is nice for the modern collector as it keeps many of the best figures in the line more affordable than their media darling brethren. As Recondo has been introduced in the new sculpt figures, it is possible that he could, at some point, make an appearance in the newly created Joe media. Hopefully, if this happens, the creators will be able to look back at Recondo's previous appearances and can capture some of the traits that flashed his potential.

Recondo figures are not too hard to find. He is a Joe and was released during the height of Joe's popularity. Even complete, you can find a Recondo without spending a whole lot of time. Recondo figures do not wear well, though, and mint specimens can be tough to track down. His thumbs tend to break, the fragile black paint tends to flake or chip and his joints tend to go weak. As such, even those who took immaculate care of their figures may still end up with a non-mint Recondo. This does not, though, mean that mint figures are expensive. Most collectors have had more than ample time to track down a Recondo and are no longer after another specimen. This means that modern collectors can still pick one up without spending a small fortune. Personally, I'm kind of done with Recondo. He is a neat figure, but his look is not enough to overcome the details about his mold that I consider shortcomings. Recondo is a perfect example of a figure who was eclipsed by those who came after him. Hopefully, the new sculpts will, at some point, offer us a real reinterpretation of the Recondo character. (The one they released really doesn't count!) Done right, I think Recondo could be updated in a way that would make collectors take notice. Hasbro has proven they have the ability. Now, do they have the desire...?

I don't need the figure, but I do need his gun. If you can help,email me. 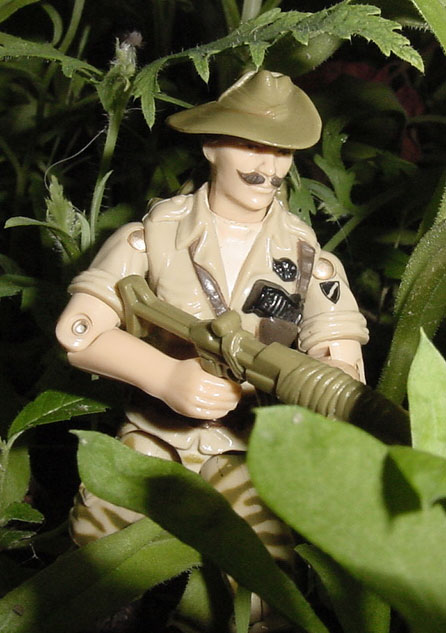 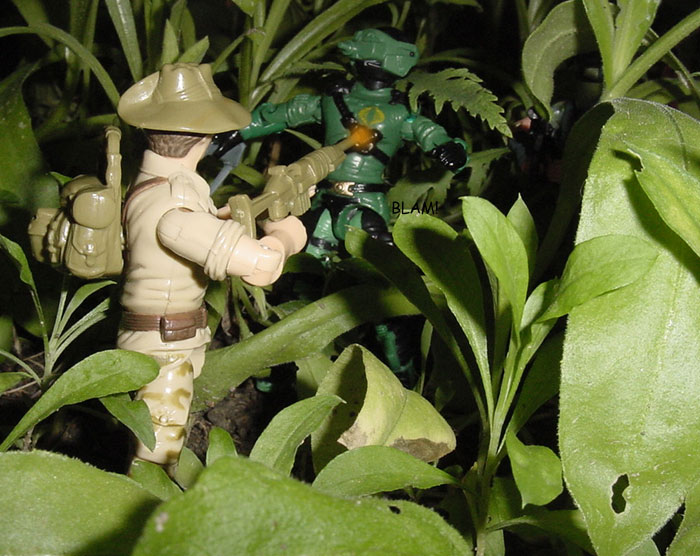 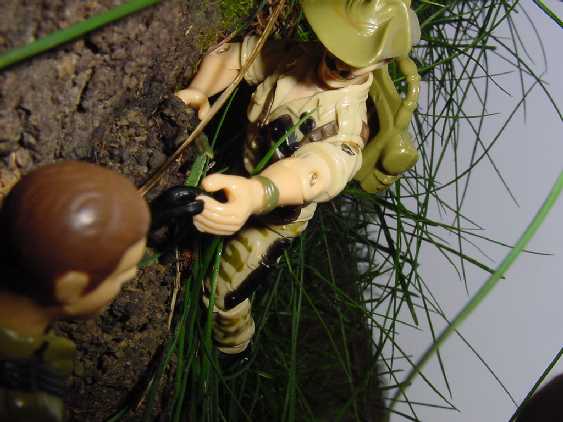 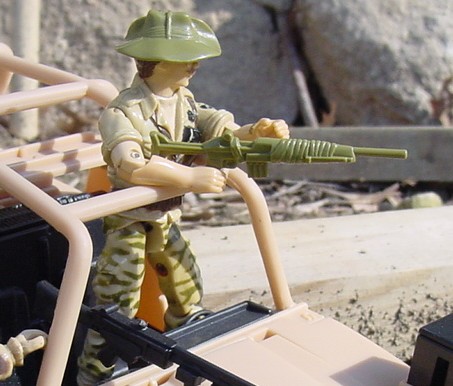