We all know about the 1990 figures. I think the thing that stands out about that year, though, was the quality of the releases in what should have been a slower year. While Joe's production seems to have dipped in 1990, the figures that were produced were among some of the best the line ever had to offer. They were very realistic, came with tons of great and unique accessories, and offered specialties that were fresh and new rather than just rehashing the same old tired personas that the line already had. While I've already explored many of the Joes that came out in this year, it is the Cobras were the sense equity was most felt. For the first time, Cobra got all specialty troops that finally gave them the ability to face Joe in terrains where the Joes had had a specialized person for several years. The support troops that Cobra had been lacking finally saw their way to plastic. Figures like the Range, SAW, and Laser Viper gave Cobra some new troops that expanded the ranks and allowed them to branch into new areas. It is the last of these figures, though, that I have recently found so fascinating: the Rock Viper.

We all know about the Rock Viper version 2. He is a currently shipping version of the aforementioned Range Viper. It is a very cool figure, but does not have the specialized equipment and mold that made the first figure so cool. He is a better army builder, but does not, at least for me, function as anything more than an infantry troop. For a Cobra mountaineer, I have to go back to the original figure. His combination of subtle colors, detailed mold, and great accessories make for a figure that should feature much more prominently in modern collector's exhibitions. Alas, the original Rock Viper is almost never seen and remains a very obscure Cobra figure that really sees no press.

About the only drawback to this figure, besides his oft broken crotch, is his guns. The pistol is kind of cool, but doesn't really fit with this guy. The large gun that fits into the pack (A big shout out to General Hawk and his awesome diostory Power Struggle for showcasing that little feature to me for the first time!) is a cool playability factor, but the gun itself has never done anything for me. Personally, I've found that Heavy Metal, Rampage, or Rumbler's gun works much better with these guys. The strap just seems like it would be an integral part of any mountain trooper's ensemble.

As you can see from the pic below, though, the figure does actually blend in rather nicely with mountain terrain. At first, the maroon and cream doesn't look like it is much. It was only after I saw the picture of this guy against the mountain backdrop that it really became apparent to me that his color scheme would actually work in most rocky terrain. I think it shows an attention to detail that was really never seen after the 1990 releases to create a figure with a feature like this that so few people would ever have the opportunity to see. I think this is the reason why the relatively small number of collectors who know about the 1990 releases enjoy them so much. Just about every figure offered that year offered something minute that really made it nice. Had the class of '90 been the class of '85 (heck, even the class of '89!) I think they would be one of the most popular years among collectors today. The fact that they weren't, though, still allows people like me to quietly build my collection of 1990 figures without attracting the overzealous newbies that seem to flock to anything released prior to 1986.

There are several frustrating factors that make the Rock Viper a rather tough figure to find. First of all, he was released in 1990. As was mentioned in profiles of figures like the Range Viper and Undertow, 1990 figures seem to be noticeably scarcer than those of other previous years. The lower quantities make it difficult to track these guys down in the quantities that army builders tend to desire. Secondly, this figure came with lots of accessories that were very brittle and easy to lose. The small pistol has a tip that is often missing and the pack, rope, and grappling hook are often missing from any figure you might find on the second hand market. Third, the Rock Viper's primary gun, the large rifle, was so large that it tended to break the figure's thumb. As such, there are lots of Rock Vipers out there with broken thumbs. Finally, the most maddening aspect of this figure is that his crotch is EXTREMELY fragile. It breaks just by moving the figure's legs. I've seen over a dozen otherwise perfect, mint Rock Vipers whose crotch was broken. Like Claymore, this figure is just prone to this awful affliction.

With all this in mind, you can expect the search for mint, complete Rock Vipers to be long and arduous. They just aren't out there. When you are lucky enough to find them, they fetch a premium. Most of the few of these guys I've found in the past year have sold for over $15 a figure. While that sum may not seem outrageous when compared to the Crimson Guard or the basic Viper, it is an insanely high price to pay for a specialty Cobra trooper that isn't all that popular and came out in the latter part of the line's run. With that in mind, you can see why my Rock Viper army is wanting. This is a guy that is cool, but his specialty keeps him only relegated to minor, specific roles when the terrain allows it. Now that my waterfall is gone, I don't see this guy getting much use. He is a figure, though, that is still a nice addition to have in your collection. It just doesn't seem that I can get him in the amounts I would most want.

I like the original Rock Viper. In fact, I also like the version 2 Rock Viper. However, since the version 2 is readily available at retail right now, I don't need any of him. I would, though, be interested if you have a mint, complete version 1 Rock Viper or two available. If you think we can work out a deal, email me. 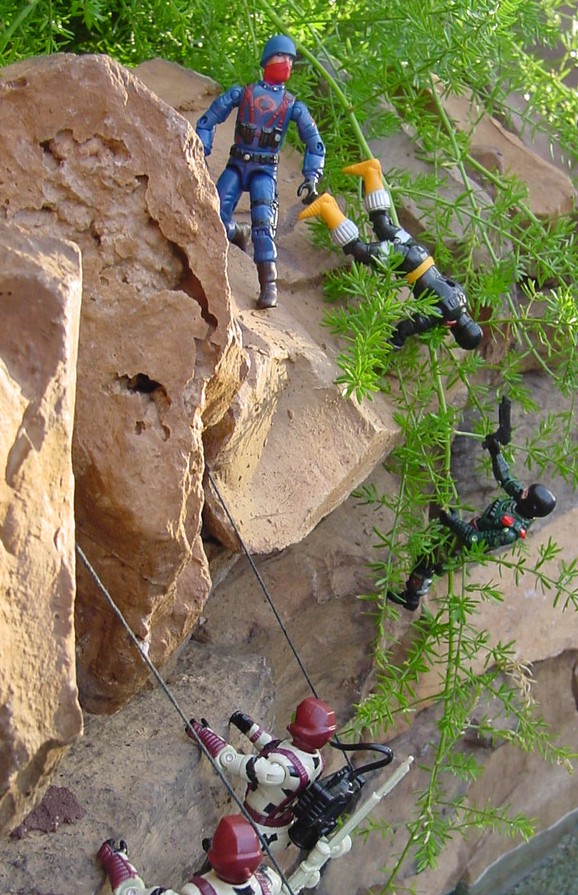 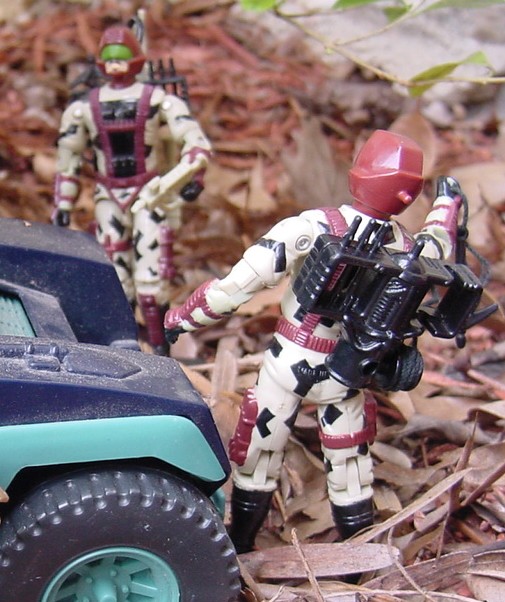 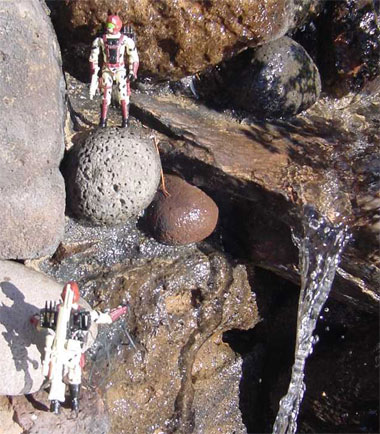 Posted by Robot_Sonic at 12:25 PM No comments:
Email ThisBlogThis!Share to TwitterShare to FacebookShare to Pinterest
Labels: 1990, Rock Viper

1988 wasn't a great year for Joe collectors. While most of the figures that were produced were pretty good, there really were no figures that stood out as fabulous. The Joe figures, though, were superior to the Cobras. Cobra had been treated bad in 1987 and got even more of the shaft in '88. Figures like the Astro and Toxo Viper were okay figures, but not the type of figures who could really be the cornerstone of the Cobra forces available at retail. (The enemy was saved, though, by the inclusion of the Iron Grenadiers.) The other Cobra figure available that year, though, was also rather bland: the Hydro Viper.

It really isn't fair to compare any figure to the original Cobra diver, the Eel. That figure is just too good for any other diver to ever be fairly compared to him. Unfortunately, the Hydro Viper doesn't compare well to any other Cobra Diver that was released. While the basic mold is nice enough and the pack, spear gun, and flippers are cool, it is the helmet that really costs this figure any shot at great popularity. Frankly, the helmet sucks. It just doesn't fit onto the figure in a manner that allows you play with him. With me, playability is the key. If a figure doesn't play well, he is doomed. Such is the case with the Hydro Viper. His helmet and hoses fall off way to easily for the figure to be any great fun. As such, my Hydro Vipers have found a life of display, but not use. Visually, the figure is very cool. The subtle purple uniform works very well and allows this figure some broad use in both fresh and salt water fighting. Of most important note, though, is the left hand of the figure. It is cast with all 5 digits extended and webbing in between them. It gives the impression that these guys have artificial claws embedded into their uniforms, as well as special webbing that makes them better swimmers. It is a level of detail that was never seen again in any released Joe figure. (Of course, that would have changed. Many of you have seen the pictures of the 1995 Dr. Mindbender prototype. He would have come with a deformed hand that would have created one of the best figures in the history of the entire line. It is a true shame that that figure never saw production.) Again, though, we come back to the helmet. With it on, the figure lacks something. It just doesn't fit well enough to have that tight look that enhances figures like Decimator, Aero Viper, Worms, Astro Viper, Airwave and Shockwave. While I know that collectors tend to disdain pre molded helmets, I think the Hydro Viper would have been better served by having the helmet molded onto his head and having accessories that just connected to it.

Over the years, I've picked up quite a few Hydro Vipers. While they look nice on display, I've never really used them. When I first got my pool, I took a couple of Hydro Vipers out into it. Almost immediately, the helmets and hoses detached and floated away. At that moment, I knew that these guys would never get lots of use. The Eel and even the Undertow figures hold themselves together quite nicely. With this guy's accessories going all over the place, I spent more time putting him together than I did actually using him. It is a sad state for a figure that is aesthetically pleasing and really should be able to be used. I think the designers took a chance with this guy. They knew what worked for the Eel as well as Wet Suit. Rather than keep churning out figures that were all the same, the decided to try something new. While I applaud experimentation, this is a case where it failed. When you look at figures like the Undertow, 1992 Wet Suit, and the 1994 Shipwreck, though, you realize that they learned from their mistake and did not repeat it. It may have created a figure that isn't all that great, but it did pave the way for some other future figures that were very nice.

There are a couple of very nice things about the Hydro Viper. First, he is rather easy and cheap to acquire. Like many of the '88 figures, he is readily available and is often mint and complete. The other nice thing is that Funskool produces a version of the Hydro Viper that is very similar to his American counterpart. YoJoe.com sometimes has the Indian Hydro Vipers in stock, but they are almost always available on Ebay for very low prices. Either of these alternatives allows you to easily build underwater armies without spending a whole lot. Of course, the low price is indicative of popularity. The Eel and Undertow are much cooler figures and receive much more collector attention. While I rarely use Hydro Vipers, they are still nice figures to have around. They help flesh out dioramas scenes and fill out the Cobra ranks. While I don't ever see these guys supplanting the more popular divers in people's collections, they are a figure that can have their uses. Even if it is only to build armies.

I really don't need any more Hydro Vipers. Who is your favorite enemy diver? Email me. 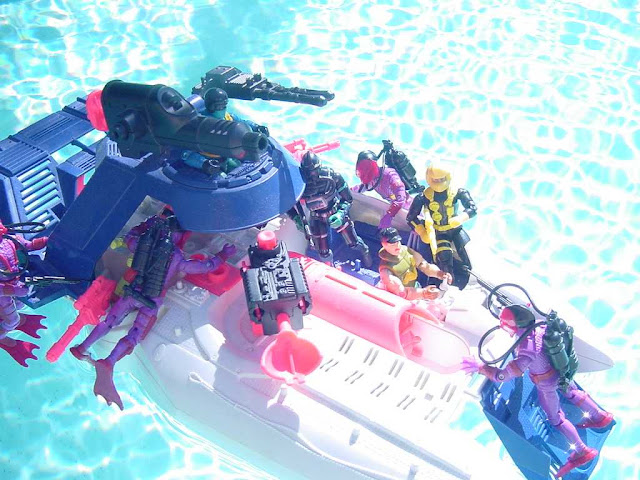 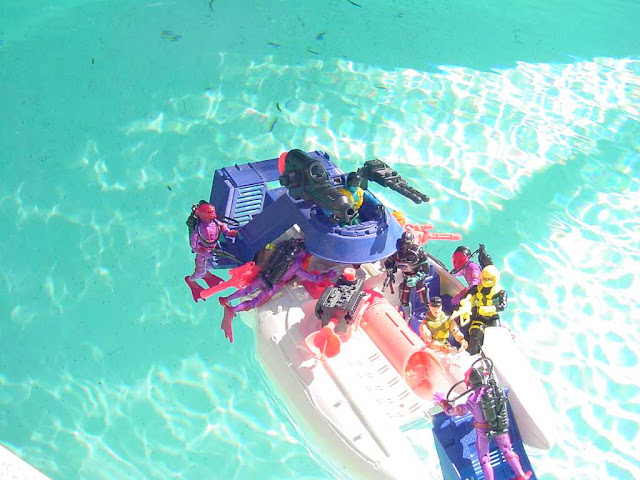 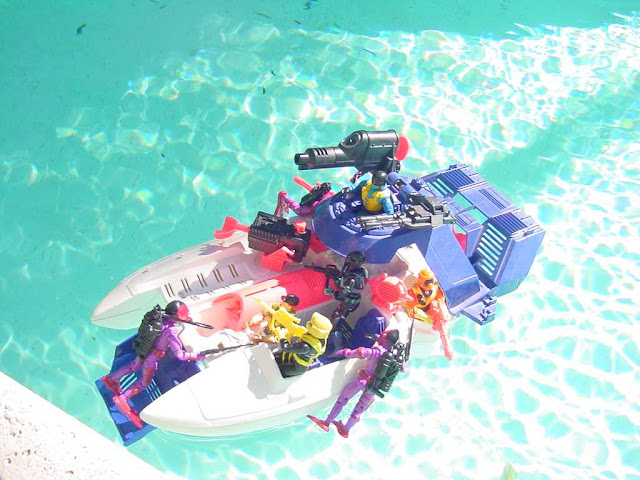 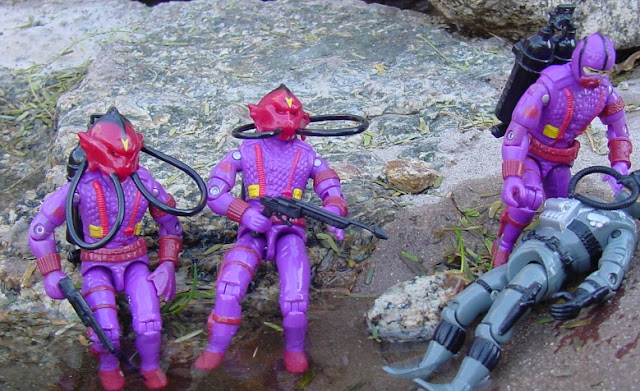