In the early 2000's, there was a warehouse find of a massive overstock allotment of Plastirama G.I. Joe toys from Argentina.  These toys were massively imported to the U.S. as toy dealers bought them for nothing and resold them for a substantial mark ups.  All those "rare" Satan and Ninja Ku figures exist in massive quantities and sat unsold for $30-$50 for a MOC figure for years.  Remember that when you're looking to drop $1,000 on one today.

Some vehicles came over, too.  They were less common than the figures, most likely because they were more expensive to import and collectors of the day didn't have nearly the interest in vehicles that they did in figures.  Among the vehicles released by Plastirama was the Bridge Layer.

The Bridge Layer has always been a fun toy just because it's practical.  It's not exciting or flashy.  But a toy that does a job and does it well is always worthwhile to have around.  You can see there are coloring differences between the Plastirama release and the Hasbro release.

Now, Plastirama vehicles have gotten hard to find and expensive.  This Bridge Layer shows that the foreign releases had some differences.  But, in general, were often pretty close to Hasbro toys in terms of colors. 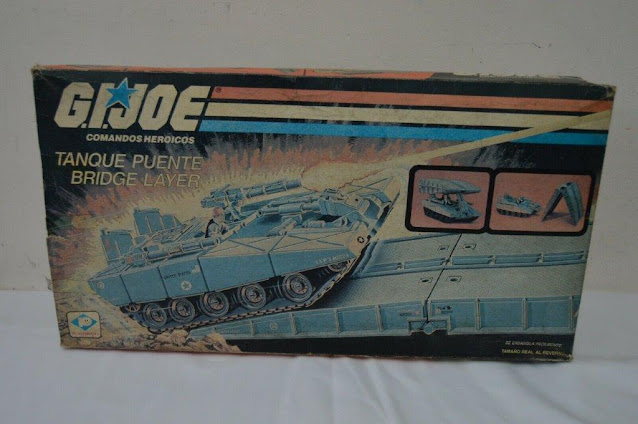 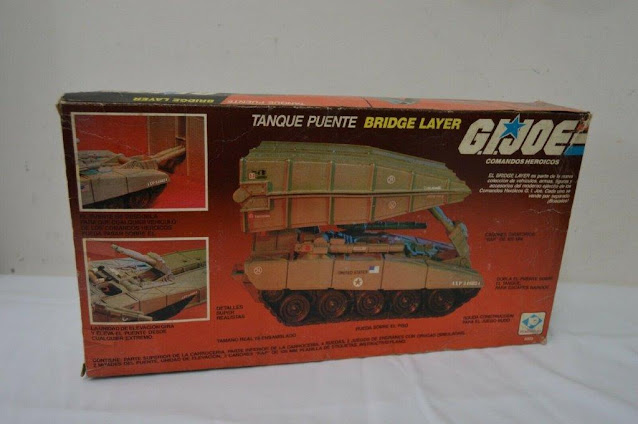 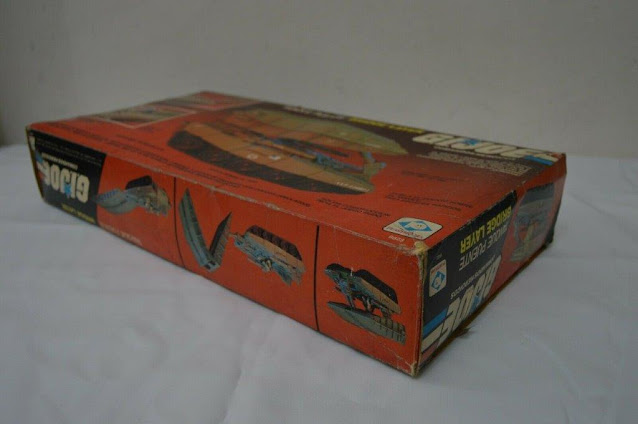 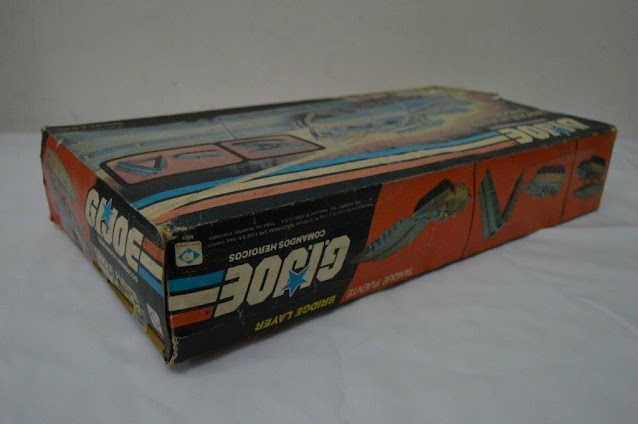 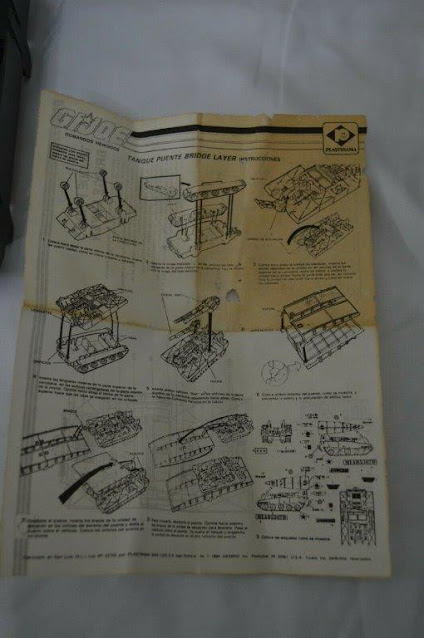 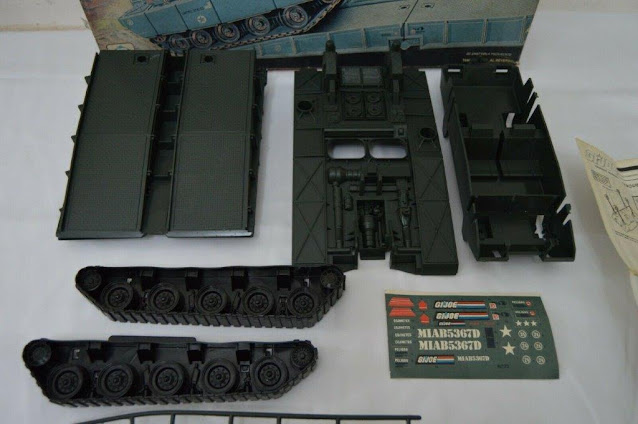 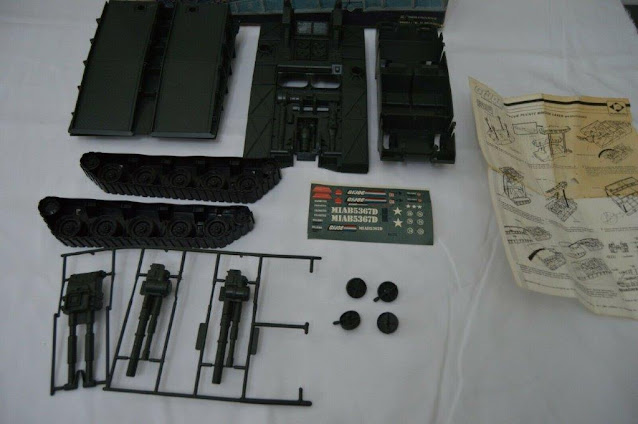 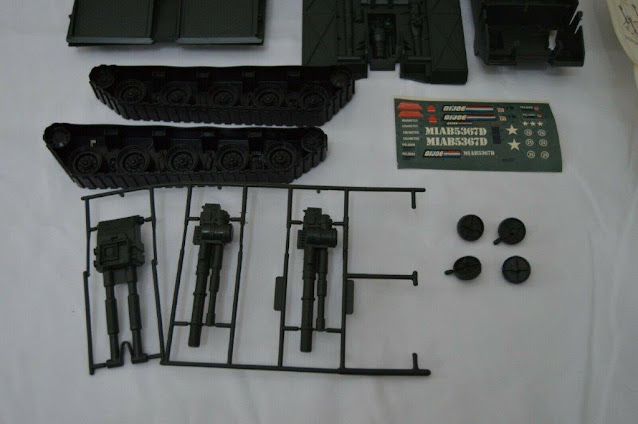 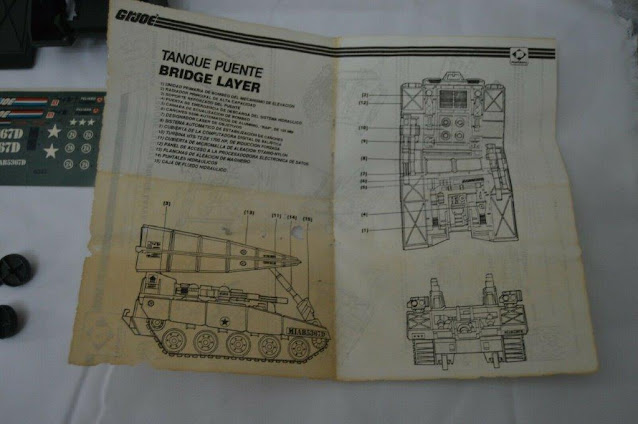 Posted by Robot_Sonic at 12:50 AM 1 comment:
Email ThisBlogThis!Share to TwitterShare to FacebookShare to Pinterest
Labels: 1985, Argentina, Bridge Layer, Rarities, Vehicles

One of the most popular posts from the 2020 Rarities month was on the later series Power Commandos figures.  In that profile, though, I did not have an example of Sound Speed and Sniper from the middle series of figures.  Now, though, you can see a sample of what the figures looked like.
Sniper is an interesting military themed figure.  Decked out in green camo, Sniper would fit into any Joe squad.  As Power Commando figures go, he's actually kind of boring.  The whole point of this series was outlandish figures.  And, Sniper doesn't fit with that.  But, as he's unique to the line, he does provide a nice juxtaposition from the more off beat characters.
Sound Speed is the more interesting of the two figures.  He's obviously based on the Cobra Eel mold.  But, instead of flippers, he appears to have skis and ski poles.  I'm not sure why.  But, his gear makes as much sense as rocket skates or a Mummy Man who also appear in this line.
There are both green and black versions of the Power Commando weapons.  This pack is different in that Sniper includes black weapons while Sound Speed has green accessories.  You see that the weapons are recycled molds from the earlier series and remain the kitbashed version of G.I. Joe weapons.
This middle series of Power Commandos figures is tough to find.  Unlike the common first series, overstock of these has not been found.  So, you'll pay a substantial premium for them over the first 6 figures.  But, all the Power Commandos are fun figures that are nice additions to a Joe collection. 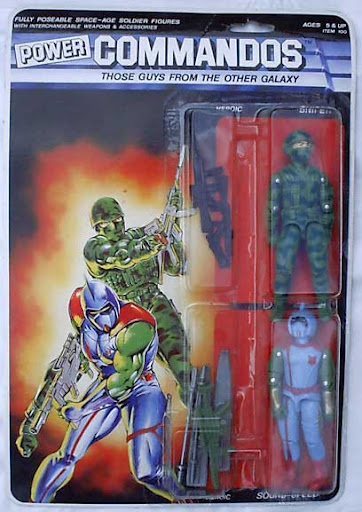 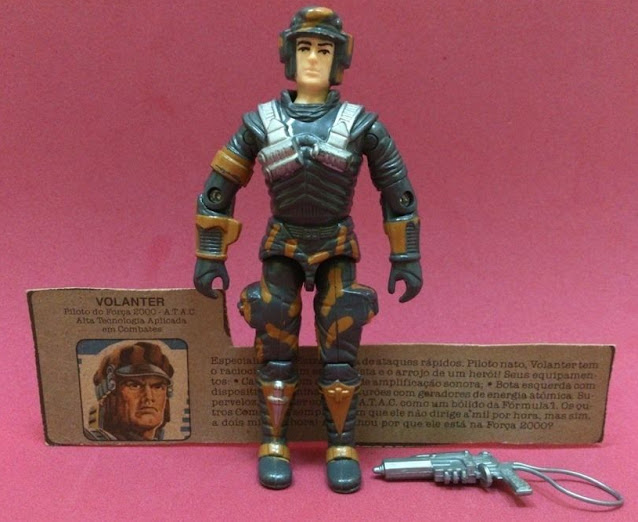 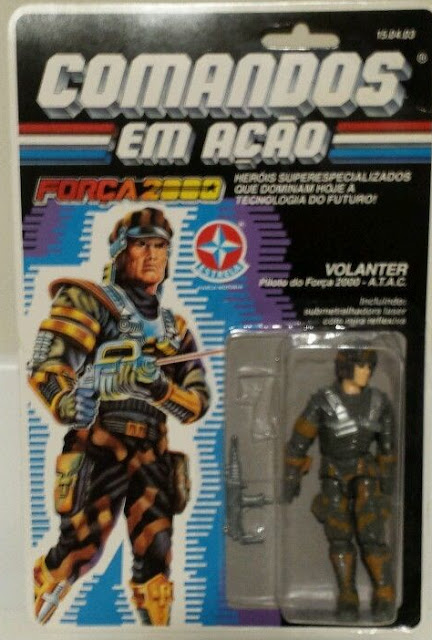 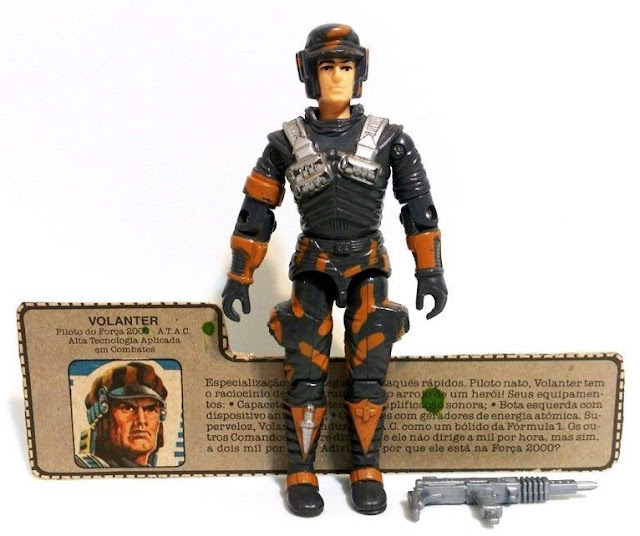 From watching this figure for years, both variants seem about equal.  But, when you base that off of, maybe, 15 samples, even one or two oversamples throws off the whole observation.  But, if you collect Comandos Em Acao, this is a variant to watch for as the silver Uzi is exclusive to this figure.
Posted by Robot_Sonic at 1:19 AM 2 comments:
Email ThisBlogThis!Share to TwitterShare to FacebookShare to Pinterest
Labels: Battle Force 2000, Blocker, Brazil, Foreign Figures, Iron Grenadier, Rarities, Variant, Volanter

In early 2003, two oddball figures popped up on Ebay.  One was a red Roadblock.  The other was this metallic green Firefly.  Both figures used the paint masks from the BJ's exclusive Gift Set, but had different base colors.  The figures sold for ridiculously high amounts.  Within a few months, though, more of the figures started showing up.  In 2004, all of the alternate Asian figures were staples of Ebay.  And, in 2005, entire sets were blown out for cheap prices on Asian websites.  It was a great time to be a collector.

As a figure, this Firefly works better than the red version that was actually released.  The red figure is crazy and bizarre.  So, it has some value for that reason alone.  But, the brown head better meshes with this green figure.  And, even the oddball blue and copper look good with the green as a base.  I'd have liked this figure had it been released.  Sure, we have a green Firefly already with the 2000 version.  But, this would have been another that worked.

Like all these once common figures, modern pricing on this Firefly is just dumb.  It will sell for hundreds of dollars.  So many collectors think this figure really rare as they weren't around when these figures were ubiquitous and common.  Sure, there's probably only hundreds of them.  But, that's a lot more than some of the other unproduced figures from the '90's where there's maybe a dozen of them that exist.  This Firefly, though, is a nice update and works for the Firefly character.  But, there were so many Fireflies released in this time that even one more repaint would have been retail overkill.  But, seeing this figure again really brings back memories of a far better time to be a Joe collector. 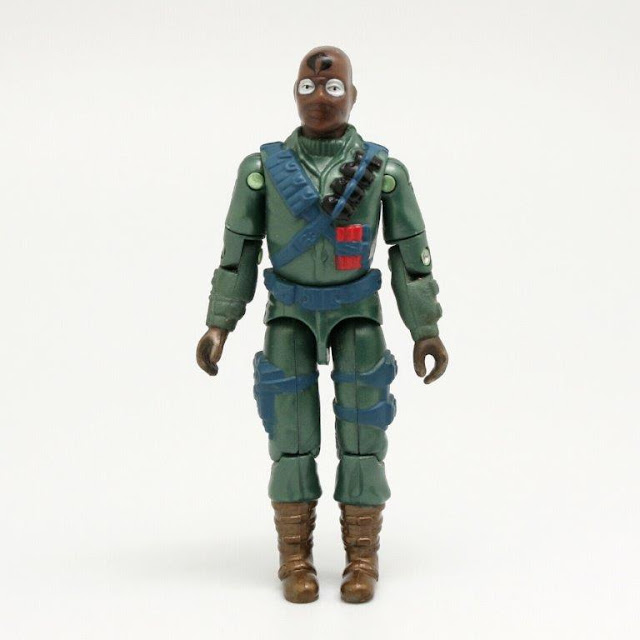 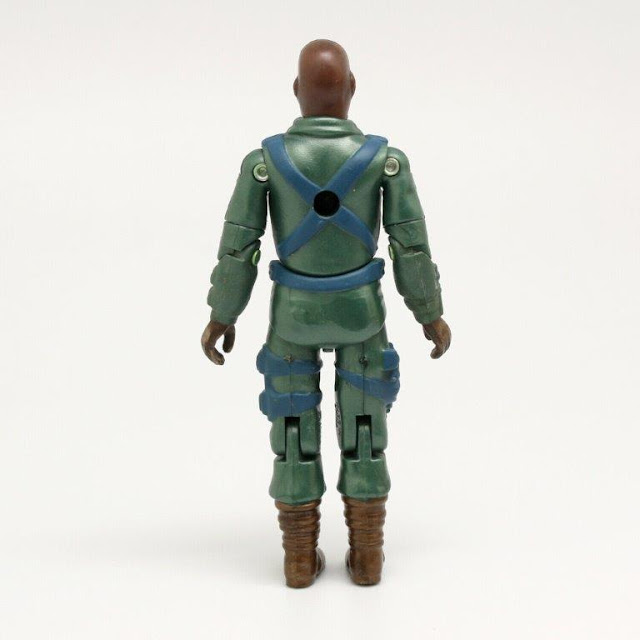 I've got an even dozen posts coming in June for Rarities Month.  There's some interesting and odd stuff.  This year, though, I'm going to be away from the Joe world for the month of June.  So, you'll see posts every Tuesday, Thursday and Saturday during the month.  But, I won't be online to promote them on my various channels.  I'm heading out of the heat and into the mountains for a month and am not taking my computer with me.  So, please stop by, comment and enjoy.  I'll respond back when I return in July.  But, enjoy this year's selections. 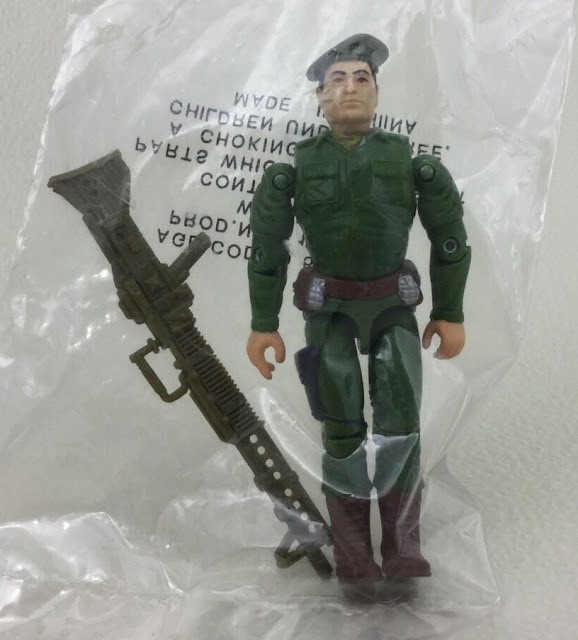 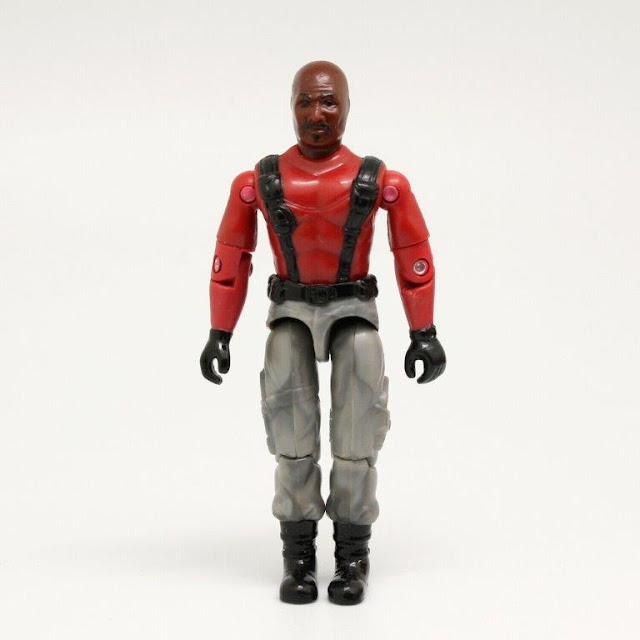 Posted by Robot_Sonic at 2:09 AM No comments:
Email ThisBlogThis!Share to TwitterShare to FacebookShare to Pinterest
Labels: 2021, Rarities
Older Posts Home
Subscribe to: Posts (Atom)