From the beginning the icon of G.I. Joe product was the card art for the original Grunt figure. As a child, many of my friends debated endlessly that the original Grunt was, indeed, just G.I. Joe. While nonsense like this was later settled, Grunt has remained one of the main images that was used to promote Joe product of all types. (I think he may have been intended to be the most popular member of the team, but fans decided otherwise.) However, the Grunt character was actually well developed and used in capacities beyond a simple infantryman. Unfortunately, though, I've long found all of the original Joe sculpts to be bland and boring. Sure, at the time they were great, but the strides made in the figure design over the years really showed how bad the original figures were. As such, it was always a welcome surprise to find one of these classic characters reincarnated in a brand new figure sculpt from a later production year. The 1991 version of Grunt, though, still left a bit to be desired.

Of the original 13 Joes, a little more than half had a new sculpt based on them released at a later date. (Grand Slam, Short Fuze, Breaker [I'm not counting the '97 monstrosity.], Flash, and Steeler were the unlucky members who were never re-offered.) For many of these figures, the later releases were simply awesome resculpts that brought a great character to life in toy form. In some cases, though, the resculpted later figure simply did not work. Sadly, that is really the case with this version of Grunt. While the figure isn't too bad, it simply is not Grunt. The 1991 remade of Zap was a great homage to the character and stands as a great example of how a remake should be done. For some reason, though, Grunt did not get the same treatment as Zap.

The most noticeable feature about this figure is the color scheme. Rather than painting Grunt up in a nice forest or jungle camo pattern, the designers went with a brown and yellow theme that really wouldn't work anywhere but, maybe, the desert. Even there, he is really a stretch. Besides the bizarre colors, though, the most noticeable feature of Grunt is his head sculpt. For reasons that can not be explained, Grunt's head is just huge (like it was not quite finished when it went to production) and looks totally out of place on his body. As if this weren't bad enough, they sculpted Grunt's face and mouth in a "shouting" motion that leaves him in a perpetual state of excitement. While the ability to sculpt a face down to this level of detail was quite an accomplishment, the sad results that are showcased on Grunt really ended the practice save for a few future figures.

Besides a few figures, the '91 assortment of Joes was pretty bland when it came to accessories. The first appearances of spring loaded launchers replaced many of the abundant and well done accessories from 1990. As such, many of the regular release Joes from that year came with little in the way of accessories beyond the spring loaded launcher. Grunt was among these casualties. He comes with a helmet that, had the head been done right, is actually pretty good. His gun, though, is an oversized monstrosity (I don't use it so it's not pictured with the figure below.) that would become the bane of collectors when it became a staple of the 1993 weapon tree. He also included a large, spring loaded weapon that was totally impractical and offered little to the figure. Grunt could have been so much better were he properly accessorized. Fortunately, the modern collector has the luxury of going back and replacing Grunt's accessories. However, had I seen the figure on the shelves in 1991, I would have passed him by just because his accessory complement was so poor.

The lack of accessories made the figure even less useful. Grunt's hallmark was his basic M-16. He was the everyman infantry soldier. His codename cemented the fact that this was guy who was on every mission. Taking those basic premises away from this figure removed much of the characterization that caused the popularity of Grunt. This 1991 incarnation was not even close to idea of Grunt, much less the character. Had this figure been given some decent accessories (the line is full of awesome infantry weapons!) I think he would be a bit more recognized today. Instead, this version of Grunt is relegated with the likes of the Super Sonic Fighters Rock and Roll, the 1997 Breaker, and the 1993 Hawk as terrible remakes of classic characters. Quite simply, the idea of the character was missed. Had the figure even been half way decent in color, sculpt or accessories, he would have been popular just because he was Grunt. Instead, he went so wrong that not even being a remake of a popular original character was enough to save him.

What do I do with this guy? Nothing. He sits in the 1991 Joe drawer and comes out on the rare occasion where I need some cannon fodder for Cobra's urban assault forces. Beyond that, he never sees any use. His color scheme can be a breath of fresh air when mixed with a group of more reasonably colored figures, but really hinders his use in any but the most carefully selected environments. I re-accessorize him on the occasions that he is used. Even that, though, isn't enough to warrant Grunt's widespread acceptance in my collection. However, there is a Grunt figure that is scheduled to appear late this year or early next year from Funskool. With Funskool's large selection of already produced '91 molds, I am thinking that this figure will be a reincarnation of this Grunt figure. As to what he will look like, who knows? The recent Funskool Wild Weasel was very nice while the Cross Country is pretty bad. Either way, I'll get one. But were he to be done nicely, I think it could give this mold some more exposure.

I've seen a lot of customizers out there who have well utilized parts from this Grunt mold to make a more perceptively accurate version of this character. However, I think a lot of the use of this figure's parts has more to do with keeping with the Grunt theme rather than finding parts that make a great figure. Still, with some recoloring, this mold does have its saving graces. There are some nice details. The main problem is that the head is just too large for the body. Replacing this really changes the look of the figure. The rest of the body mold is usable, but requires heavy repainting. I would suggest that you check some of the larger customs sites out there to see what some creative people have done with this mold.

Like all the 1991 figures save a few, Grunt is pretty tough to come by. There just aren't a lot of loose samples out there that are readily available. Don't get me wrong, he's by no means rare, but most of the '91 Joes are harder to find than the regular retail release figures from any other year. What that does not mean, though, is that the figure will be pricey. Most people don't consider this a definitive version of Grunt and the figure is kind of ugly. That means that when you do find them, they will be cheap. It would surprise me if you get this guy mint and complete for under $10 with no problem. In fact, if you like some oddities, you might check out this Chinese Grunt. He is the same construction as the American figure and has similar accessories. For the price, this is a great way to get this guy. Of course, once you've got him, what will you do with him? This guy sees very little use in my collection and is never talked about in general Joe forums. Most collectors would like to forget this version of Grunt and I can't say I blame them. For demonstrative purposes, he has filled a need. Beyond that, I see Grunt remaining forgotten.

This Grunt is interesting, but I'm pretty set for this version. What is your opinion on the resculpted versions of the original 13 Joe characters? Let me know. 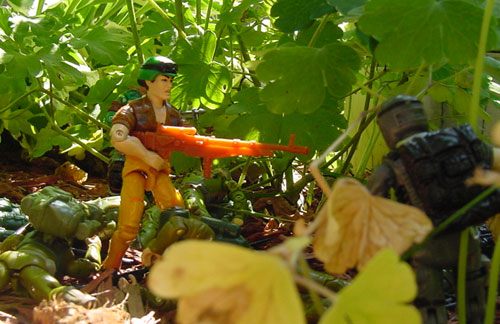 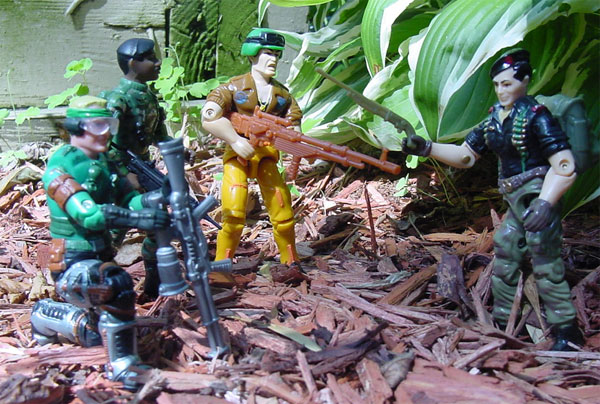 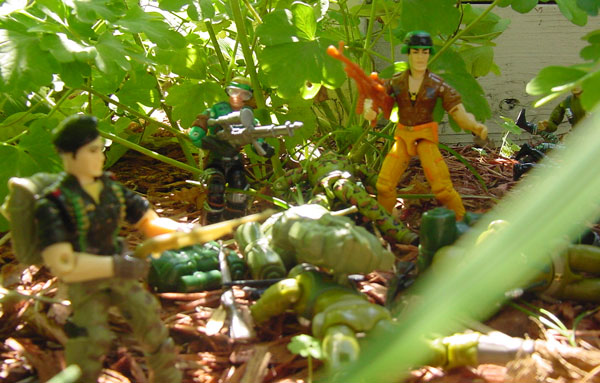 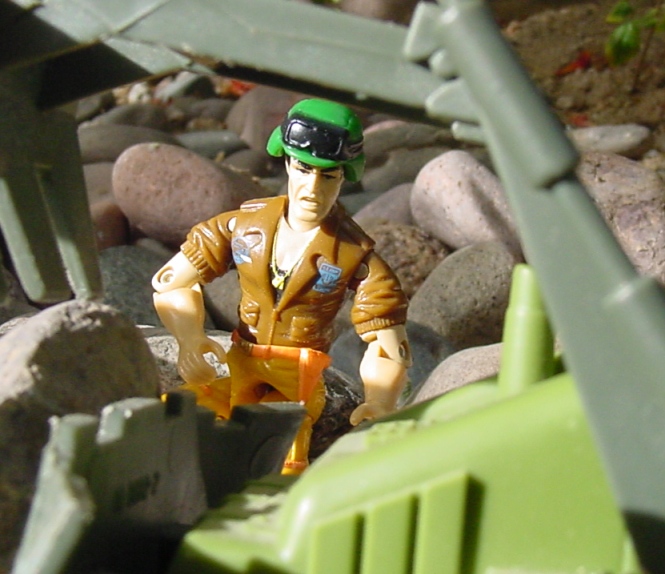 Posted by Robot_Sonic at 11:02 AM
Email ThisBlogThis!Share to TwitterShare to FacebookShare to Pinterest
Labels: 1991, Grunt