It is known that Hasbro has a wealth of ARAH molds at their disposal. Unfortunately, they have chosen to ignore a large part of their library and focus on the same molds over and over again. Every now and then, though, they dust off one of the lesser used molds and accidentally create a figure for the ages. It has been a rare occurrence since 1997 but has happened enough to keep collectors around. When they do produce a gem, though, there are usually circumstances in the collecting world that cause the figure to be overlooked or quickly forgotten. Such is the case with the subject of this profile: the 2004 Urban Strike Night Creeper.

Night Creepers are an odd duck in the Joe world. They, technically, are not Cobras. Instead, they are independent contractors retained by Cobra Commander. As such, many collectors have fewer uses for Night Creepers than they do other, officially Cobra ninjas. From their first appearance in the comic, though, I was enthralled by the Night Creepers. I didn't, necessarily, like their origins and characterization. But, I did enjoy how they were used: ninjas who were also soldiers. They were not the ritualistic ninjas to which I had become numb from their overuse in the comics. They were more like ninja Major Bludds. That aspect I did like. The fact that the figure was really nice just helped them become more important in my collection.

The original Night Creeper figure is well done but very purple. The Snow Creeper is perfect for the arctic but the white color isn't that useful in other climates. This urban version is the best paint job released for the Night Creeper. The black, blue and white combined with the urban cammo paint job make this figure useful in many more environments than the previous releases. The dark colors are reminiscent of the traditional Cobra appearance but different enough that the figures don't blend into the multitude of Cobra blue figures who have been released. The judicious use of brown really brings out the small straps and details that hold the figure's chest armour in place. (The leather-brown is really well used on the Urban Firefly, too. The detail on that figure is near convention quality.) The overall look of the figure is dark and menacing and is more in line with the characterization of the Night Creepers that we saw in the comics.

In my collection, these Night Creepers are Cobra's initial strike force. They are the commando units who are sent into an area first to undertake "softening" missions like destroying power plants or damaging infrastructure. They may also be used for on the spot intelligence. They are not full blown combat troops. In fact, if they are caught in an all out fire fight, they call for backup or retreat. Their edged weapons are a function of their purpose. These Night Creepers are not supposed to be seen. Any unfortunate soul who does come across them is quickly...and quietly eliminated. The Night Creepers will perform their work and coordinate their explosions with the arrival of the Cobra combat forces. Their targets never knew the Night Creepers were there until something explodes and a target goes dark. By that time, the full Cobra combat force is arriving and the Night Creepers are never noticed as they slip away. This makes them the type of figure that does not get used for long stretches of time. (Which is how they dropped from my collecting radar.) but then start to appear as major parts of intricate story lines. I find myself using my Night Creeper team as a pre-cursor to Cobra's targets in South America and Africa. In this setting, a successful mission means a more deadly strike is coming while an unsuccessful mission means that a target is spared...for now. It is a nice niche for the Night Creeper as it allows me to use the figure enough to keep it interesting but not so much that I never want to see another version again.

This Night Creeper's accessories are passable. Unfortunately, the two most distinctive Night Creeper weapons (the crossbow and the pronged stick) are missing from this version. The signature curved sword is also MIA. However, the 2 included swords with the figure do work and are acceptable. Not distinctive, but ok when taken in light of most of the other, contemporary accessory choices Hasbro dropped into the Toys R Us 6 figure sets. The nice thing is that you can take the uzi from the urban Storm Shadow and give it to the Night Creeper to make him more of a commando than a swordsman. The Night Creeper mold has only been used for Hasbro based releases. After the original figure appeared in 1990, the mold did not show up again until the rather interesting Snow Creeper in 1998. Hasbro didn't use them mold again for 6 years, though, and this Urban Night Creeper remains only the 3rd time this mold has seen production. The unexplained gaps in release dates for this figure are an oddity for Hasbro who seems to like to repaint molds ad naseum. But, in this case, it works well as it leaves the Night Creeper mold as one that is nice to see from time to time but not...at least not yet...overused.

One thing of note in regards to the Urban set: there is a complete variant color scheme for the figures. They were not, officially, released. But, Asian Joe sellers offered a set of urban Cobras who featured different paint masks and red highlights. You can see the alternate Night Creeper in the photos below. The origin and purpose of these figures is unknown. It is likely, as some figures featured unused paint masks, that the figures were the original plan for the Urban Strike set. For whatever reason, the colors were not approved and the entire set was redesigned with the white highlights. The alternate urban figures are relatively cheap on the second hand market and are one of the more unique ways to expand your urban Cobra armies.

The Urban Strike set probably had a production run of ~20,000 units. Even with a run that low, it hung around at retail for a while. In most markets, it was mostly sold through by the late 4th Quarter with the Christmas season finally taking them off the pegs. Collectors really didn't warm to the set even though it featured two army builders (this Night Creeper and the Flak Viper mold) in their best ever color schemes, a high quality Alley Viper repaint (though the Alley Viper is a bit overdone), the first Scrap Iron figure in 20 years and offered what is still the most detailed paint job for a V1 Firefly that we have seen. (Until the '05 Comic Pack Firefly, the Urban version was probably the best overall Firefly Hasbro had ever released.) The Storm Shadow figure is a bad mold in acceptable colors with decent accessories. As such, it really made little sense why this set got such a bad rap among collectors when it was so well done. I think it had a lot to do with the fact that collectors were still on the high from the '04 Infantry Team and saw anything with less than 6 classic army builders as a complete let down. It was really an unfair comparison but one that has left these Urban figure affordable even while other, lesser figures have appreciated.

Urban Night Creepers are cheap. Mint and complete, you can get one for about 7 bucks. You can buy an entire Urban Strike set for about $30 if you want one right now and can get them cheaper if you have a little patience. The reality of the Joe world is that collectors do not reward ingenuity by Hasbo in terms of figure releases. We fawn over repaint after repaint of the Viper yet let high quality repaints of great, later molds go unsung. Since the Night Creeper is not the Cobra Trooper/Officer, Crimson Guard, Viper or BAT mold, collectors largely don't care about it. This is nice as this urban version remains incredibly cheap and available and is easy to aquire in multiples. For a figure of this quality, that is a rare combination. As the collecting world matures, we might see more figures like this become appreciated. Until then, I'll take advantage of hidden gems like this Night Creeper and quietly build my collection. 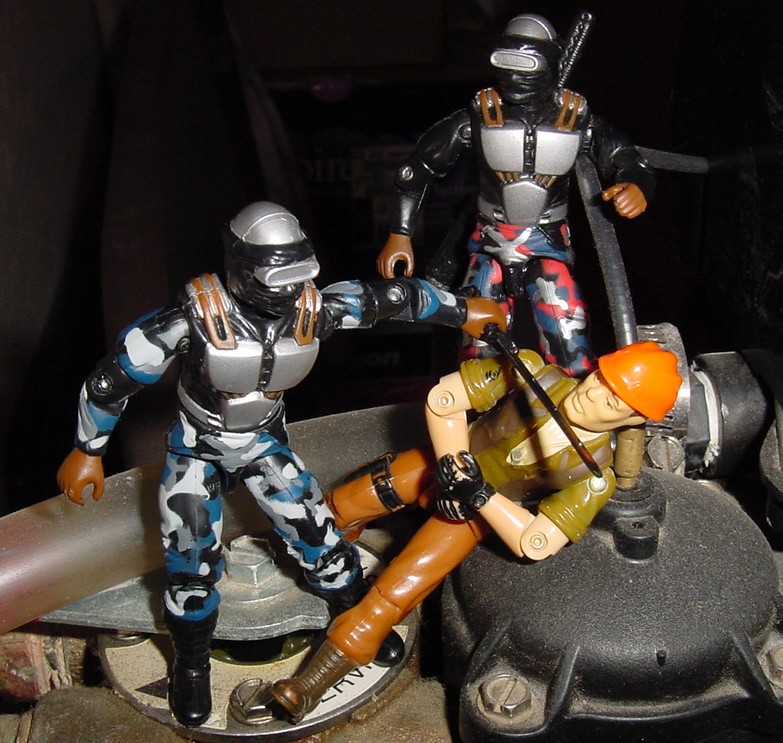 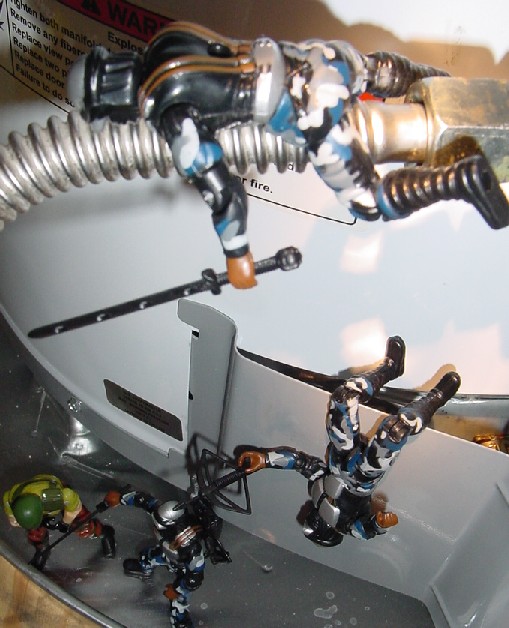 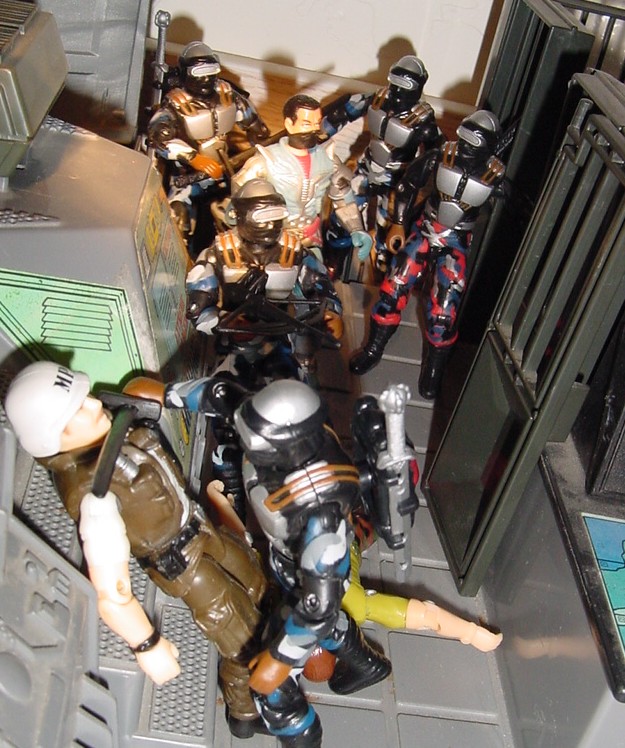