The original Dusty figure is a classic mold from the most popular year of the Joe line's original run. The Dusty character is fairly popular overall, too. During the vintage line, Hasbro was wont to keep their most recognizable names fresh. But, as the line progressed, many of the updated versions of classic characters produced figures that were less than memorable. In the case of Dusty, though, the updated version of the character is actually a high quality design that perfectly matches his specialty. Unlike the clunky original figure, this new version is rather sleek and looks more like a rough and tumble desert fighter. But, it's so obscure that most collectors simply gloss right over it.

There is no denying that the original Dusty is an iconic standard of the Joe line. The new sculpt renditions of Dusty were more true to the original design than any other and it is likely that if we do see a Dusty in the Anniversary style figure sculpting, he will hearken back to the classic '85 look as well. But, that doesn't mean that this newer version of Dusty isn't a solid figure in its own right. Many great figures from the line's later years were overshadowed by the original version of that character. But, this was often a testament to the incredible quality of the original design. Many of the figures created after 1982 were designed in the perfect storm of toy sculpting budget, increased awareness of the military and media exposure. The impossible to recreate standard takes many figures from ordinary toys and transcends them into iconic looks that are forever associated with particular characters. For figures like this later version of Dusty, it is an unfair standard of comparison. But, it has left this figure as a way for the modern collector to either re envision Dusty or to create an entirely new desert fighter.

As a figure, this Dusty isn't perfect. No desert survivor worth his skin would dare wear a sleeveless tunic leaving his arms exposed to vibrant desert sun. The folly of this uniform flaw is made more glaring by the fact that this version of Dusty features red hair. The fair skin that accompanies such a trait would be burned to a crisp in the desert sun if left uncovered. Really, this is a minor point, but one where the style of the figure was considered over the practicality of the design. The red hair is a rare feature in the Joe line and the subject of controversy. The original Dusty figure featured black hair and that is the look that most collectors associate with the character. The red hair, though, is a more distinguishing characteristic and gives the figure a bit more personality. (It also offers a way for the enterprising collector to use this figure as someone new and have him appear alongside the original Dusty in any adventures.) For me, it's something of note about the figure, but nothing that affects his characterization in any way. Beyond that, the figure mold is rather stark and simplistic. He features the standard straps and holsters with a molded chest grenade. The figure doesn't feature that many colors or paint applications. But, the look is still well enough designed for you to believe that he would blend into a desert environment. The final touch is the beret. It is a far cry from the cloth bearing battle helmet of the original. But, it makes this figure appear more sleek and modern. This isn't a soldier who will go into the desert for weeks to fight. He is a quick strike expert who is in and out rather quickly. It is a different look for Dusty and one that helps offer the diversity that many characters designed for such specific themes lack.

As I live in the desert, you'd think desert figures would have more use to me. Until recently, they were a larger part of my collection as my backyard featured desert landscaping. But, this has changed as I put down some grass to help with the heat. Now, most of my desert surroundings are in the front of the house. That has once again reduced the significance of desert figures in my collection. However, as you look at Hasbro's take on desert themed figures over the years, you realize how far the paint application technology has come. All of the desert figures in the vintage line, including those from the final years, had very basic cammo patterns applied to them. The figures were nice...but, they were not overly intricate. When you compare this Dusty to the desert cammo applied to figures from the Desert Patrol Set, you realize how much more Hasbro can do with paint applications these days. I'd very much like to see some of the vintage molds like the '93 Duke, this Dusty and even a few other, non desert figures, receive modern updates using this new cammo type. It is unlikely that will happen at this point. But it does show that there is still a great deal of untapped potential in many of the original figure molds.

In my collection, this figure has remained relatively forgotten. I acquired my first version back in the late '90's. He went into a baggie and was put away. I acquired another version shortly thereafter, but sold him off back in 2000. Since then, I have not had another of these figures come my way...even though I was notorious for buying large collections of 1990-1993 figures during my heavy Joe buying days. Since this figure remained relatively unavailable to me, I don't have much in the way of stories regarding the figure. My main memories surround the modern, non desert versions of this mold. I do have difficulty, though, seeing this figure as Dusty. I still prefer the original version and find it hard to replace many of the '85 characters with later renditions since that was probably the main year of my childhood Joe collection. As a new character (named Sandstorm rather than leaving that name for a coyote....) this figure works better for me. It allows me to use the high quality mold and accessories without precluding the appearance of the equally well done original Dusty figure. But, the truth is that this figure hadn't been out of his baggie since the turn of the century when I opened him up for this profile. So, while the figure is good, it isn't one that will likely ever occupy a prominent place in my collection. And, since you don't see this figure appear in too many pictures, dios or stories in the community, it seems I'm not alone in that.

This figure includes decent accessories. At the time, the gun with a movable stock was quite innovative and it is the only example of such technology in the vintage line. However, Hasbro has made Dusty's rifle, pistol and backpack the de facto standard for their modern renditions of Cobra Troopers and Officers. As such, these days, it's hard to see Dusty's accessories as anything other than somewhat common. (His weapons have also been reissued with a variety of other figures in various sculpt types. So, black versions of the gun, pistol, stock and pack are EXTREMELY common.) It's hard to realize that, at one time, these weapons were as distinctive to this version of Dusty as the FAMAS with bi-pod is to the original version. Dusty also included a coyote named Sandstorm. This cur has been repainted a few times as the modern take on Snake Eyes' trusty wolf companion Timber. So, all of this Dusty's accessories were reused in the modern line for a large variety of purposes, factions and figures. The original versions, though, remain the only uses of these molds in the desert brown. So, at least this figure retains that bit of originality.

This Dusty mold has seen decent use. After it was used to make this figure, the body was used around 1994 to make the Chinese Flint figure. After that, it was pulled into production in 1995 as part of the Street Fighter Movie line where it was used for the under appreciated Rock Fighter Guile. Hasbro dusted the mold off again in 2000 where it was part of the A Real American Hero Collection and again in 2002 when then head was used for the Night Rhino Dusty and the entire body was used by Master Collector for the highly underrated and very hard to find Paratrooper Dusty. At some point, this mold was also considered for release in 2001 as the driver of the Desert Striker. This mold in new "chocolate chip" cammo was seen at an early 2001 toy convention. The figure surfaced again as part of a diorama at the 2002 G.I. Joe convention. But, it was never actually released and there are no known versions of this figure outside of Hasbro. For fans of this mold, this is probably enough. While the mold is decent, it is now available in the solid desert scheme as well as colors that are more conducive to other environments. As such, if the mold remains retired, I think that collectors have enough versions of it available to feel the mold's potential was fulfilled.

Mint and complete, this figure is actually somewhat hard to find. All of the 1991 Joes save the few that included spring loaded weapons were only released during that one year. As such, they are not as common as most other figures. As this Dusty is a well done figure and includes two easily broken or lost accessories, dealers tend to charge around $12-$15 for a complete version. But, if you're patient, you can get the figure for about half that from online auction sites. Even for that price, I have yet to add another version of this figure to my collection. I have the one and it's good enough for me at this point. But, even if you have the original Dusty, this is a figure worth getting. The overall quality and design is just a perfect blend for this character and gives you a more sleek version of Dusty that can be used in conjunction with the original. This figure is a prime example of how obscure the 1991 lines remains in the modern collecting world. It is a year full of great figures with solid accessories and this Dusty just drives home that point. 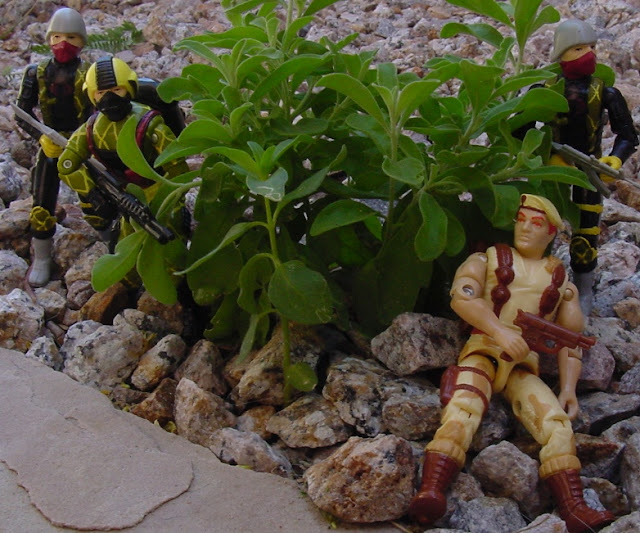 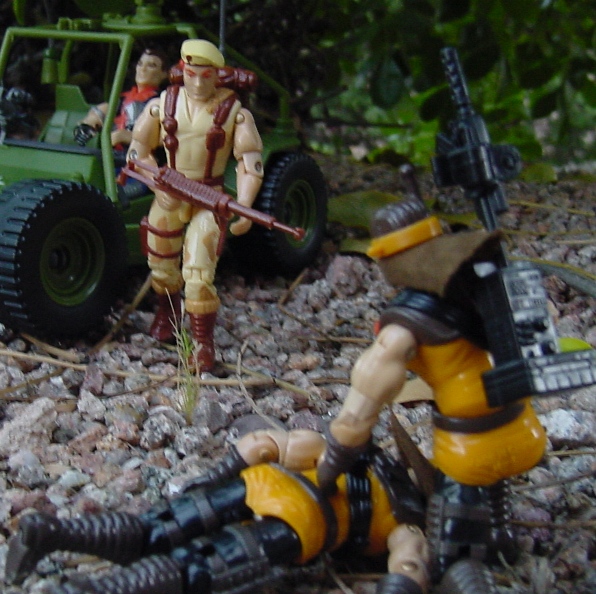 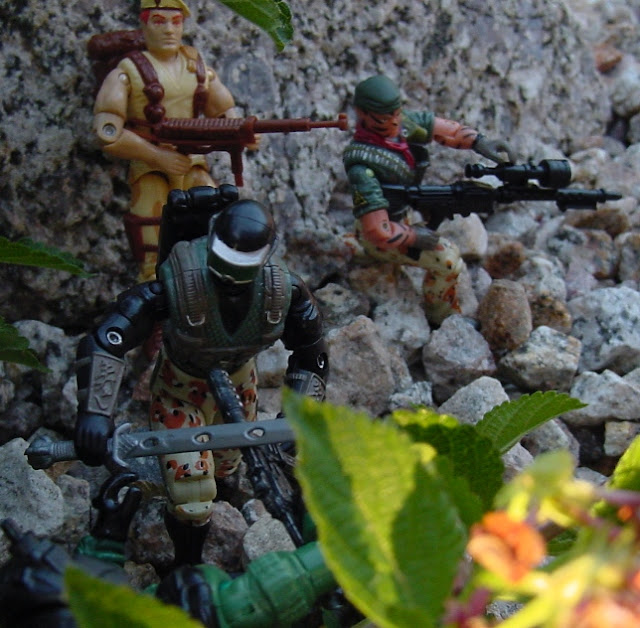 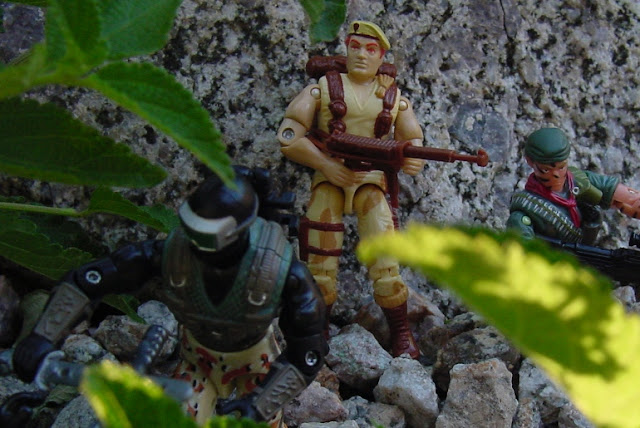 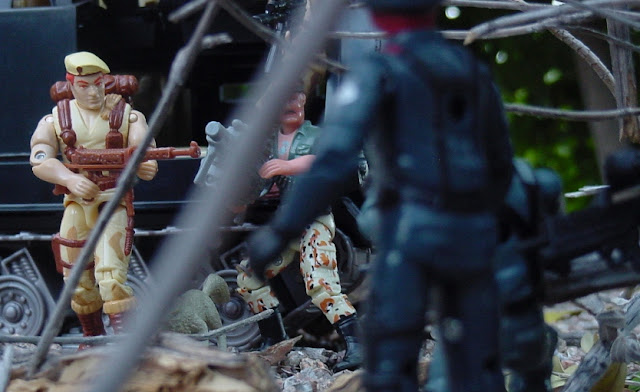 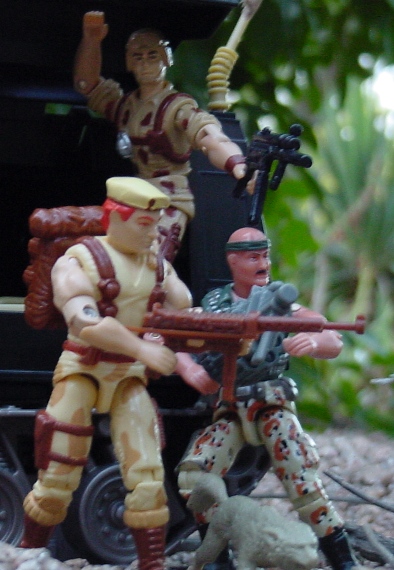 Posted by Robot_Sonic at 10:12 AM
Email ThisBlogThis!Share to TwitterShare to FacebookShare to Pinterest
Labels: 1991, Dusty