There are many G.I. Joe knock offs out there.  Most were cheap items designed to simply be a military themed alternative for budget minded gift givers.  Some, though, are spectacular in the lengths they went to mimic Hasbro's successful, flagship brand.  The Power Commandos by the Lucky Bell company are one such knock off line.  They not only stole ideas like filecards, package design and characterization, but they also deliberately sculpted their figures directly after existing Joes and even copied Joe accessories and mashed them together to form new weapons that are instantly recognizable to Joe fans.  The effort to do this was commendable and the power commandos remain one of the more ambitious Joe knock off brands.  The first series of figures were packed in 2-packs of one good guy and one bad guy from the "Terror" faction.  Today, we look at the menacingly named X-Ray Eye.

As a kid, I didn't like knock offs.  To me, they didn't work with Joes and looked far too different.  On the cheap knock off figures, the entire ensemble was a poor rip off of Hasbro sculpting.  But, on the better knock offs, it was usually the head and gear that were dead giveaways.  Usually, the heads are not properly sized or lack the details of a Joe head.  The gear may be intricate, but it lacked Hasbro quality.  So, I had very few of these items in my childhood toy room and those that were received as gifts usually ended up lost or destroyed rather quickly.  As a collector, though, I've grown to appreciate what many of these knock off lines attempted to do.  Most made at least a token effort to offer something different from the Joe line.  And, while much of the figure construction still leaves these items absent from my collection, there are exceptions where the figures most closely mimic G.I. Joes.

The quality of the X-Ray Eye figure itself is fairly high.  The paint masks are very crisp.  And, you have green, silver, flesh, black, gold, blue and red for a total of 7 colors on the figure.  Very few vintage Joes ever featured that many.  I suspect that the gold paint on the figure's hands is every bit as brittle as gold paint used in the vintage Joe line.  The sculpting is also very precise.  Usually, you'd find soft details on other knock offs.  But, the Power Commandos are so closely modeled after Joe parts that they retain the hallmark Hasbro quality.  It's likely that these molds were either based on or created from actual Joe molds.  You can see the Tele Viper's chest bright as day on X-Ray Eye.

I find the heads to be of two camps.  The covered head, like X-Ray Eye, aren't too bad.  While they are bigger than vintage Joe heads and still look a bit out of place with vintage Joes, you can forgive the flaws since the countenances are covered and the head coverings could hide any number of things.  The human heads, though, are less well done.  X-Ray Eye's packmate, Submarine, has a pretty terrible head sculpt that looks like the knock off he is.  It ruins a figure that is a close proximate for the 1986 Cobra Viper.  X-Ray Eye's head, works, though.  The single eye covering is no more bizarre than any number of Cobras.  And, his colors work in combo to make for a decent looking bad guy.  (Terror characters are supposed to be from outer space.  But, X-Ray Eye has a distinctly human fleshtone which helps ground the character in a more traditional Joe role.)

It is in this capacity that I find value in X-Ray Eye.  Getting a new, named Cobra is now impossible.  Even the foreign releases have been barren for over 15 years, now.  So, figures like X-Ray Eye work as new bad guys who can keep Cobra fresh.  I see his axe as the figure's defining feature.  X-Ray Eye is more or a cross between a Halloween movie villain and a Cobra baddie.  I've gone down the failed executioner road.  But, that limits the character quite a bit.  So, I'm focusing on the axe as an ornamental weapon that only appears in close quarters combat.  Though, I'm sure I'll one day have a photo of X-Ray Eye chopping off the head of some poor Steel Brigade figure.

The Power Commando accessories are extremely odd.  In the CORPS! line, we saw some exact matches for Joe accessories appear: only with subtle differences.  (Flint's pack was missing a grenade.  Blowtorch's pack had a slightly different pattern on the tubes, etc.)  The Power Commandos took that a step further.  Their weapons are almost exact copies of 1/2 of two different Joe accessories.  These two pieces are put together into something new.  Any Joe fan will instantly recognize the weapons as Joe related.  But, will also see how the designers made them different enough to avoid any legal issues.  X-Ray Eye's primary rifle is a combination of the 1984 Baroness' rifle butt combined with the classic 1984 Firefly rifle barrel.  The claw attachment is the BAT claw with a stick added as a wrist attachment.  And, the big axe features BBQ's blade stuck onto Alpine's pickaxe handle.  There are tons more strange hybrids in the line that make the gear worthwhile as an addition to any collection, even if the figure's aren't your cup of tea.

To make collecting Power Commandos more fun, there are some figure variants.  The first wave of figures are common.  But, there were later waves that featured re-releases of the Wave 1 figures.  But, most of the 6 figures featured some type of variant.  For X-Ray Eye, the differences are subtle.  The variant figure features orange boots and a slightly darker red torso.  It's not much of a variant.  But, it exists, nonetheless.  And, if you don't have anything to do, it gives you an unsatisfying variation that will consume way too much of your time trying to find.

I'm not sure of the origins of the Power Commandos.  The figures were manufactured in China by a company named Lucky Bell.  They feature a 1992 copyright date and it seems perfectly logical that they fit into this timeframe.  The cards are all in English.  (Though, the Mexican overstock features Spanish language stickers.)  I am not certain as to where all the figures were released.  Many origins can be traced to South America.  But, this seems to be more a case of a product being dumped into any market that would take it.  The all English packaging lends credence to them being designed for the American market.  But, their similarity to G.I. Joe may have caused them grief at customs when the not coincidental designs were seen and reported to Hasbro.  It's another of those stories that we'll likely never know.

In my early collecting years, all Power Commandos were hard to find and somewhat pricey for what they were.  In the 2010's, though, large amounts of overstock Power Commandos began to appear: mostly in Mexico.  This lead to both greater availability and softer pricing for the first 6 figures.  The series two figures remain both rare and pricey, especially since a couple of them are dead ringers for 1986 Cobra army builders.  You can get a carded X-Ray Eye/Submarine pack for around $20 with a little looking.  You might even be able to find a loose, mint and complete figure for 1/2 that amount.  But, you can also still get a complete set of 6 carded figures for far less.  It's likely those will disappear soon as they aren't as prevalent as they were a couple of years ago.  So, now is the time to acquire these guys as we've seen recent examples of Joe adjacent items rapidly climbing in price as soon as some found stock is absorbed. 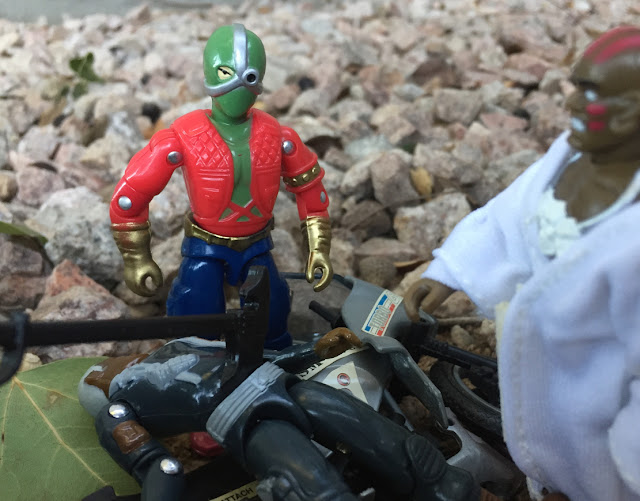 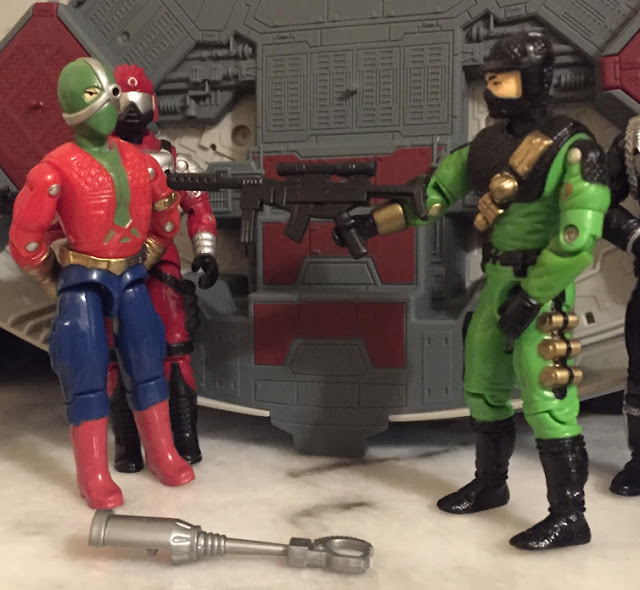 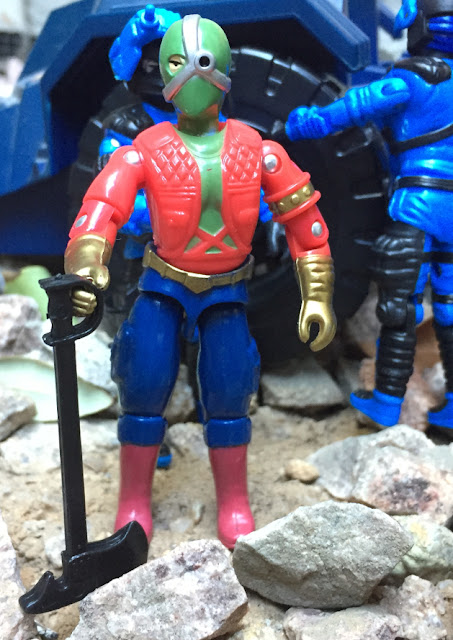 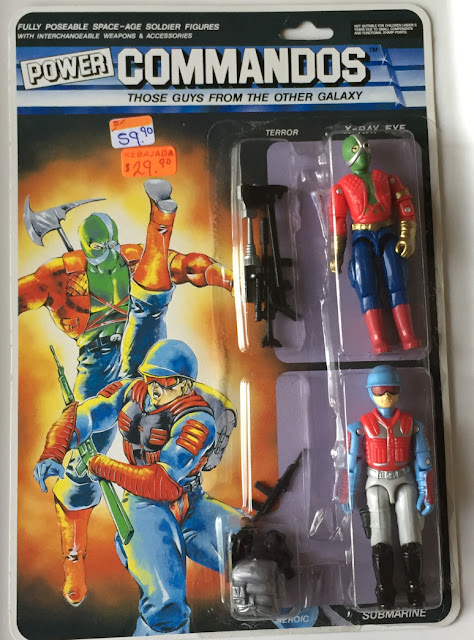