In 1992, I was long out of Joe toys.  I had bought a single Night Viper in 1990.  But, had not been to a toy aisle in quite a while.  My high school years were wrapping up and toys were mostly out of my mind.  Comics, though, were not.  While I had drastically curtailed the number of comic books I bought every month from my late 1980's heyday, I still picked up a few titles.  Of course, G.I. Joe was one of them.  In some ways, it was out of habit and loyalty that I kept with the comic.  But, it was also a way to keep informed on the toys of the day without resorting to actually going to a store or buying any actual items.  Plus, the stories and characters were something I could relate to since I had such a history with the property.

In these pages, I was introduced to a menagerie of new characters.  Some looked like they would spectacular toys.  Others, were somewhat lame.  But, they were new and exciting and, when I started buying Joe toys again, gave me both a familiarity with the characters and also pre-determined favorites that I wanted to track down.  In late 1991, Larry Hama introduced the comic readers to the Ninja Force.  This team of Ninjas to support Snake Eyes and Stormshadow was designed to sell new toys, but also raise the prominence of G.I. Joe's superstars.  The designs in the comic were promising and some of them looked like they could be great toys.  But, when it finally came time to track down these figures several years later, I found that the figures were long on "action" but not in line with my expectations of design.

When I think of Ninja Force, I think of Slice and Dice.  I think of them because I thought the comic book design of Slice was awesome and was almost enough to get me to go out and look for the figure.  The G.I. Joe members of Ninja Force are, to me, mostly  interchangeable parts that lack any real depth.  T'Jbang is a perfect example of that.  If you asked me to name a group of Ninja Force figures, there's a good chance I'd get them wrong.  T'Jbang and Dojo, to me, are so close in look that they simply cancel each other out.  Nunchuk is a bit better due to his different coloring.  But I knew nothing of the T'Jbang character prior to this profile and really only chose him as he's the last member of Ninja Force that still calls my collection home these days.  (How he survived when the others were sold remains a mystery.)  But, in my zeal to find obscure Joe figures, I figured I'd look into the T'Jbang character and see if I had missed a hidden gem.

One look at the figure in the photos below, though, is enough to tell you I did not.  The bright yellow and blue combination is not a flattering color scheme for any action figure.  But, even taking that away, the figure is simply not that good.  The 1992 sculpting had improved since the early days of the line.  But, good design on a poor concept still doesn't really work.  The figure has bare shoulders and arms (which seem to be a ninja thing, according to Hasbro) which look somewhat odd.  He has large, bulky boots which belie the stealthy implications of his profession.  The most off putting aspect of the figure is the luchador type head gear.  It does not hold up at all.  In short, you have a big, blocky figure who looks like he escaped from a Mexican wrestling rign rather than an expertly trained ninja.

The real failure of T'Jbang is the character.  You have a mystic swordsman who is, by choice, mute.  Yet, despite his devotion to his art and craft, he still found time to become a fully qualified Battle Copter pilot.  It screams of the trend to make all characters all things.  The result is an utterly forgettable character who really offers nothing you can't get from better figures.  If I wanted a mute swordsman, I'd get a Snake Eyes figure.  They were colored better, featured standard articulation and were available at the time of this figure's release.  If I want a pilot, I'd just use the ones included with the Battle Copters as they are pretty strong figures in their own right.  There's just no reason to have the figure in any of his intended specialties and what fun is a character who doesn't speak when that is the calling card of the most iconic character in the entire line?

So, that leaves me with no place for T'Jbang in my collection.  I've had a beat up figure for years.  He was so cheap that he wasn't worth selling off.  So, he just sort of hung around.  When I got the figure out, his chest was covered with some residue between the quilts of his shirt.  You can see it in the second photo below.  I decided to try something and got out a baby wipe.  I used it on the entire figure and it cleaned him up, nicely.  You can see the results in the first photo.  It's the same figure in both photos.  The baby wipe not only removed the residue, but also a lot of dust and dirt that was caked onto the rest of the figure.  So, that's something I'm going to do on more dirty figures going forward.  It really breathed new life into the figure and is a cheap and easy solution for cleaning toys.

The Ninja gimmick ran its course with Ninja Force.  The days of martial arts masters like Quick Kick or Budo were nice ways to augment the line without diluting Snake Eyes and Stormshadow.  Ninja Force removed that subtlety Ninjas were now their own team, apart from G.I. Joe.  It was overkill, but also a definite response to the early '90's popularity of certain reptilian, pizza eating, shell covered ninjas.  (The characters were introduced in the comic in 1991 and it's likely that the figures saw ample shipping in late 1991 as well.  Though, they are considered 1992 releases.)  Ninja Force was a continuation of the change in G.I. Joe's direction.  In 1991, the Joe line became a market follower when it introduced Eco Warriors.  It had spent the previous 9 years being the market innovator.  But, Joe's presence and influence on toys and children was diminishing.  And, the remainder of the line's life would be spent chasing the market rather than leading it.

T'Jbang figures are cheap.  Mint and complete figures sell in the $3-$4 range.  Carded figures, though, can be had for between $8 and $10 without much looking.  Collectors do not care for the Ninja Force figures at all.  The character returned in the 2015 G.I. Joe convention set.  Those figures sell in the $40 range.  But, that's more a function of the figure's rarity than any character resurgence.  For the price, it doesn't make sense to not have a T'Jbang figure, even if it's just for completion.  But, the figure is so poorly done and uninteresting that I find it hard to muster the desire to pick up a carded or higher quality version to cross off the list.  I've long avoided the Ninja Force figures and T'Jbang is a microcosm of why.  While I've been surprised by a few of the figures from the end of the line, this ninja is not among them. 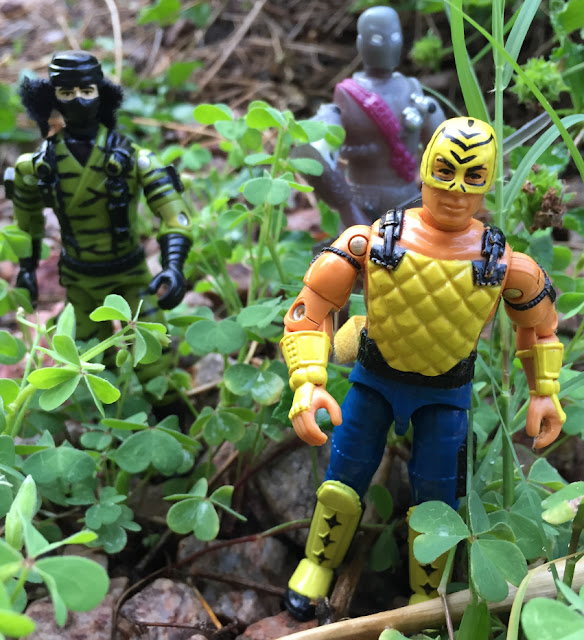 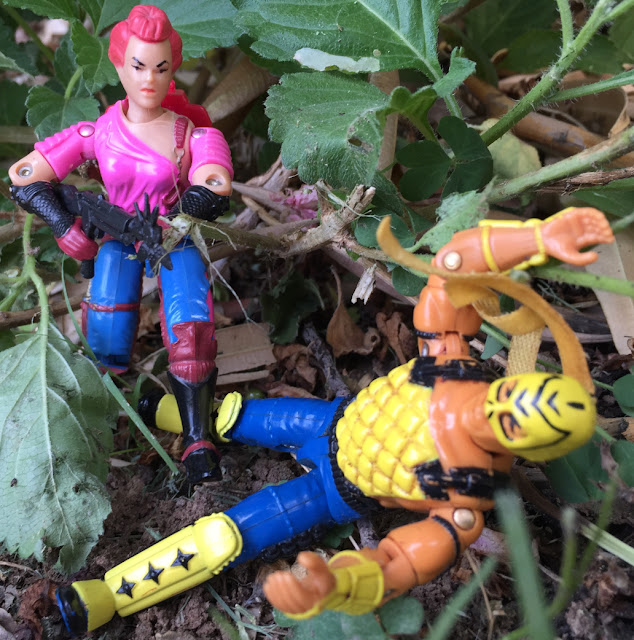 Posted by Robot_Sonic at 2:30 AM
Email ThisBlogThis!Share to TwitterShare to FacebookShare to Pinterest
Labels: 1992, Ninja Force, T'Jbang