Much has been made of the new Joe releases. While everyone has their opinions of the figures made between 1997 and now, most people agree that classic characters seem to retain the most popularity. It seemingly makes no sense that an immensely popular character like Roadblock would not make an appearance in these new releases. Sure, we got Double Blast, an original Roadblock mold. But we never got to see a new version of one of the most recognizable and popular characters to ever grace the Joe world. (Roadblock was another rare crossover character that has appeal to both comic and cartoon fans.) The speculative reasons for this are many. Hasbro may have lost the copyright to the character's name. As was proved with the '00 Tomahawk, though, simple problems like that can be creatively worked around. The real reasons for Roadblock's disappearance may never be known. It could be oversight. It could be that a high ranking executive has it in for this character. We may never know. For some, the slight is an injustice that taints the integrity of the line. For others it is just a footnote as the line matures and attracts a new generation of fans.

I've long liked the Roadblock character. From the earliest days of 1984 when he first graced my collection to my unending search for his 1994 Star Brigade version, Roadblock has been a staple of my collection for a long time. The character's complexity and unique attributes allowed him to transcend most other Joes in terms of characterization and popularity. As such, his various figures were always featured in my collection. (In 1988, I had all but quit Joe collecting. I only bought 2 figures that year: Hit and Run and the Tiger Force Roadblock.) Usually, though, it was the original mold of the figure that I used. In recent years, though, I've moved away from using any figures made prior to 1985. The smaller, less detailed molds just don't interest me the way figures from the line's later years do. I hate the '86 Roadblock and have never used that figure. The Star Brigade figures have always been army builders as rescue personnel, firefighters, or pilots. That really left me with only one choice if I wanted to use Roadblock, this '92 version.

Like many people, though, I didn't really have a use for this figure. I thought the mold was cool, (Most of the 92 molds are. 1992 is really a great year for Joes, but too many people just overlook it.) but hadn't really associated the figure with the Roadblock character. As has happened many times, though, it was another Joe fan whose showcasing of this figure brought him to my attention. In General Hawk's fabulous dio-story Power Struggle, he uses this mold of Roadblock. Seeing this figure used in that capacity opened up a new mold for me. I pulled out my '92 Roadblock and armed him with the accessories from the Tiger Force Roadblock. At that point, I had a new figure to represent Roadblock in my collection.

Since then, I've found this figure to be a nice addition to my collection. While the classic Roadblock mold is still a great version of the character, it is this later mold that allows for him to be better utilized with the later year figures that tend to see the most use in my collection. This, of course, raises another issue. For me, the newest Joe figures are the most interesting. Frankly, most of the pre '88 figure molds have been played out. I consider them boring and overused. When I see some of the lists of figures who are planned for release in 2002, I am excited that it appears that many later characters and molds may see production. The reasons for this are many. Personally, I'm sick of having the same figures repainted over and over. I want some variety. If you look at a snapshot of '92 figures, you will see some very realistic paint jobs, but they still offer stark color and contrast. The newly sculpted Joes bring that feeling back. The repaints we have been getting are just the same color scheme applied to very boring and mundane molds and frankensteins.

I won't lie to you and tell you that the recalled version of this figure isn't hard to find. It is. Some collectors put the total number of recalled Roadblocks at around 10,000. However, he came out at a time when lots of kids still opened, broke and lost their toys. As such, whatever the production numbers on the recalled version of this figure, you can be sure there are far fewer than that today. Carded, a recalled Roadblock can fetch $100 or more. Loose, well, the interest just isn't there and you see a significant drop off. Without the recalled accessories, though, this figure is pretty easy to find. He was shipped in ample quantities and can be found in many lots of later year figures. There are two important things of note about this figure, though. As far as the figure itself goes, there are absolutely no differences between the recalled version and the corrected version. The figures are identical, only the accessories are different. (There is also a repaint of this figure that was released in 93 that has some neon highlights. This is from a different year and not, in any way, related to the '92 version you see below.) While talking about the accessories, a couple of years ago, the machine gun itself was the most desired of the "rarer" accessories that came with this figure. The recalled version was the only figure ever released with this gun in the U.S. In the past year, though, Funskool figures have become quite common. The very cool machine gun that came with the recalled Roadblock is currently available with several different Funskool figures, including a repaint of this classic '92 mold, for very cheap prices from a number of online Joe dealers. With this advent, the desirability of the machine gun has gone down as Funskool offers a cheap way to acquire it. (Much the way I did. The gun you see in the figure's hand below is taken from a Funskool Red Dog.) With all that in mind, this guy is still my most used version of the Roadblock character. Given a chance, I think you will find him in a similar role in your collection as well. 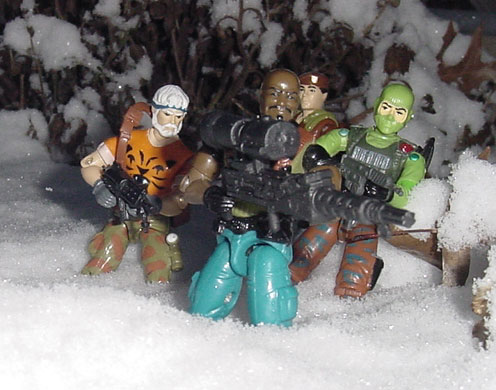 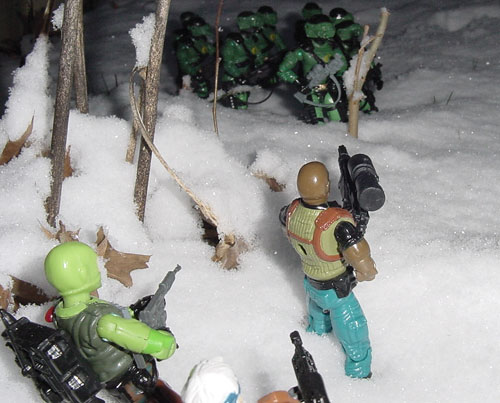 Posted by Robot_Sonic at 2:09 PM
Email ThisBlogThis!Share to TwitterShare to FacebookShare to Pinterest
Labels: 1992, Roadblock