One of the most oft asked questions about this site is, "Where do you get the time to write up all these long blurbs about action figures?" The simple answer is that I don't. I simply steal whatever time I can and write one up. I find this incredibly relaxing. It's rare to have enough time for me to do anything major. Instead, I take a few moments here and there, usually when I'm totally stressed, and do something like this to take my mind off of whatever is bothering me. It is also useful for times like right now where I am stumped by a work problem. After a few minutes of doing this, I can go back and attack it fresh again. (Just a note, starting a company is usually more trouble than it's worth. Still, the excitement makes coming in every fun. At first I never thought I would do it again, now, I can't see working for a company that doesn't have ambitious plans.)

I don't know where my first Salvo came from. He appeared in the early '90's. The figure was in good condition but only had his helmet. My brother doesn't remember ever getting him, and I never bought him. The only explanation I can come up with is that a neighbor kid was playing with him in our yard and someone found him and assumed he was ours. Either way, I had a cool figure with a great helmet. In fact, I think that Salvo's helmet is the best fitting helmet ever offered in the Joe line. It is so tight and actually looks like a real helmet. So many of the other helmeted figures had to have either small heads or or bulky helmets in order for them work. Salvo avoided all that. His helmet is enough to make the figure useful for many purposes. The green legs are cool, even though it would be painful to walk with all that ammo rubbing your legs. Still, the mold is good. The stupid slogan on the shirt is lame, but the brown does work well and keeps this figure basic enough to have many uses.

This guy is supposed to be a missile trooper of some sort. Instead, I use him as a basic infantry trooper. If you look at the scan below, the gun is from a Super Sonic Fighter Lamprey and the pack is from Tiger Force Flint. These accessories help make him my basic cannon fodder trooper. While Recoil is my special missions trooper, this guy is the basic grunt who spends most of his time getting wasted by superior Cobra units. I think of his "Might of Right" t-shirt as the ultimate double entendre. While the wearer thinks it a sign of personal strength, the brass thinks of them as a sheer numbers game where individuals die, but the collective group will succeed if only due to sheer numbers. Needless to say, I don't use these guys as rocket scientists. I usually take two of them into a battle and have both of them gruesomely butchered in the first few minutes. They work as a excellent foil to the more established characters and specialty troopers. Those guys live because these guys make the mistakes that flush out the enemy. It's not necessarily nice to use your allies as decoys to further your own personal success, but war is never pretty.

After his initial retail run was finished in 1991, Salvo also appeared again in Chinese packaging. Around 1995, Hasbro dusted the mold off and used it for the great Street Fighter Movie Edition Balrog figure. After that, the mold went MIA until early 2003 when Hasbro pulled it out for a new version of Big Brawler that was made available in the Tiger Force set. The mold was used again in 2004 for the VAMP Big Brawler and was also used as inspiration for the DTC new sculpt Salvo that was offered in 2006. The ARAH mold, though, has never been used in it's entirety since this original figure. Frankly, that's too bad as I think that many collectors would welcome a newly painted version of Salvo. His obscure mold, great accessories and under appreciated character would have made for a perfect repaint at some point in the line. At this point, that will probably not come to pass. But at least collectors can still track down this original mold to fill their Salvo needs.

Salvos aren't too tough to find. He comes with lots of little accessories, though, and can be problematic to find complete. Most of the 1990 Joes are readily available. While they don't exist in the sheer numbers of the '89's, they are still easily found at reasonable prices. I love this guy as an infantry army builder. Even now that I have a complete specimen, I never use his real gear. He always gets a big gun, field pack, and a transportable body bag. For that reason, this guy is in all my adventures. With a little imagination, he can become an integral part of anyone's collection.

I would like some Salvos, but there are many more figures I need first. If you like this guy, Email me. 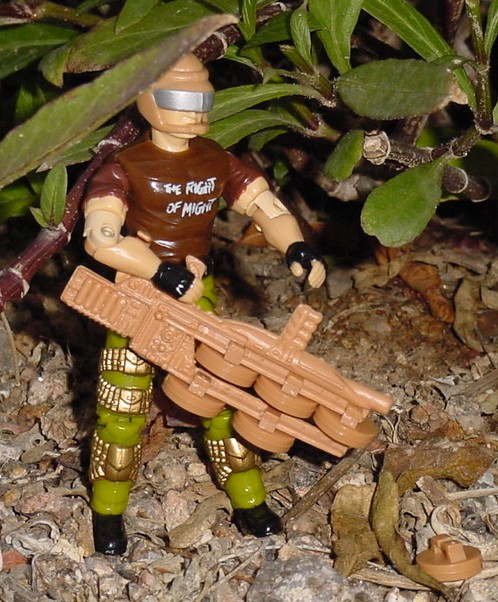 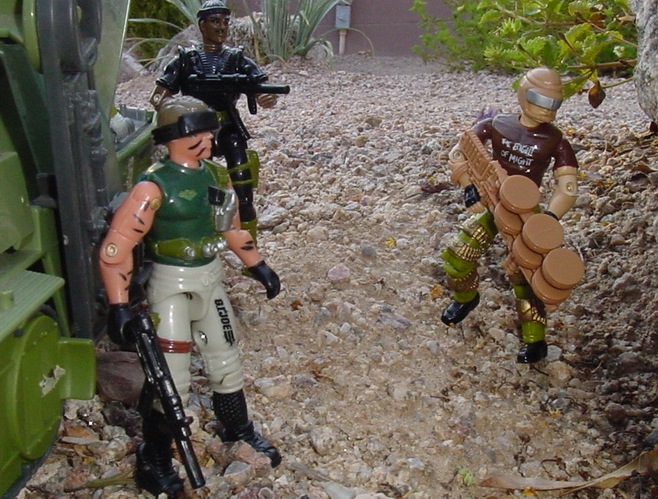 Posted by Robot_Sonic at 4:35 PM
Email ThisBlogThis!Share to TwitterShare to FacebookShare to Pinterest
Labels: 1990, Salvo