One of the hallmarks of 80's toy lines was the mail away premium.  Kenner was famous for it in the vintage Star Wars line.  And, Hasbro followed suit in the Joe line by offering Cobra Commander and Major Bludd as early bird mail away premiums.  In early 1984, Hasbro upped the ante.  Not only did they offer Duke as a mail away figure, they added in a little vehicle, too: the MANTA.  This windsurfer was exclusive to the mail away premium and never sold at retail.  At the time, I found the MANTA a terrible toy that had zero value to my collection.  But, three and a half decades later, the MANTA's engineering has impressed me.  And, the idea of a small, self contained toy is far more interesting to me since such things really no longer exist in the toy world.

The MANTA debuted in G.I. Joe #18 in the fall of 1983.  This is one of the sources of many false memories for me.   Prior to this profile, I would have sworn that the MANTA was a 1983 release.  It appeared in the comic.  All of the artwork on the mail away paperwork features Stalker and Zap.  And, even on the blueprints, you only see an original 13 styled figure.  The fact that it debuted with the Duke mail away, though, also plays into this.  I got my first Duke very early in 1984.  (I recall a day shortly after his arrival as we didn't have school and my friend wanted me to bring my new Skystriker and Duke over to his house.  But, our garage door was frozen shut and my mother had to boil water to get it open so she could drive me over to my friend's home.)  So, it's likely that the MANTA first entered my collection early enough in 1984 that I still associate with 1983.  But, regardless, the toy is considered a 1984 item.

The MANTA, itself, if pretty simple.  You have a two part mast, a boom, the sail, a machine gun, the front and back of the board, two outrigging supports, an outrigger and a missile.  That's it.  Well, not entirely.  There's also a big backpack that opens up so that you can take the MANTA apart and store it on a figure's back.  It's an ingenious little add on to the overall sailboard that makes the MANTA more portable since it can be affixed to any figure from that era.  The idea of a take apart toy that could be carried around was new to the Joe line.  The MANTA's opening backpack was a natural extension of Destro's backpack that had debuted the prior year and it showed that the backpack idea could be expanded into greater functionality.  The problem with the take apart idea, though, is that the toy then fell apart easily.  You couldn't actually take it on water as the board would split and the entire thing would sink.  Even playing on land, the board would separate as you moved it across the carpet.  So, the versatility of the design also limited the play value of the toy's intended purpose.

So, the MANTA sucks.  Well, not really.  But, for me, the entirety of the MANTA's affect on my Joe collection was forged in 1984 when we got at least one and maybe as many as three MANTA's.  Within days of arriving in our home, the sails were ripped to shreds...never to be used again.  The machine gun remote control never made it off the sprue.  And, the rifle itself had broken at least one thumb on a figure.  On top of that, if you tried to play with the toy, it crumbled to pieces with just the slightest use.  It was awful and a waste of the toy.  Now, that was my experience.  It's almost certain that other collectors had different experiences with the MANTA and may even consider it a classic piece of the Joe armory.  But, the extent of my childhood memories of the MANTA was trying to tape the sail together enough that I could use it to sail across the "lake" in our toy room.  (We had this ancient, circular carpet that had a while center.  This was effectively used as a water feature for a great many adventures.)  Every time I pulled it across, the board would separate, the sail would fall and the Joe who was manning it would drown in frustration at a toy that simply didn't work for me.

The only real use I had for the MANTA was for the rifle which was included with it.  To me, it seemed like a version of Stalker's rifle on steroids.  And, I often used it as such.  The larger muzzle meant that the weapon was more powerful than most other rifles.  It could be used to shoot down planes or tear up Hiss Tanks.  I imagined it fired flaming bullets that would burn through Cobra armor and lead to flaming deaths for Cobra operatives who were unfortunately enough to be caught in its path.  But, the rifle also had limitations.  The handle was large and broke more than one thumb of early figures who I deigned worthy of wielding it.  In time, the rifle became something that was carried along in the APC as a source of additional firepower.  But, I came up with stories of why it wasn't used.  As a Joe grabbed it, a Cobra sharpshooter would snipe it from his hand, rendering the weapon useless.  Other times, it would jam.  Or, I'd just use with a figure who already had a broken thumb and who was about to die in a blaze of final glory as the flaming bullets streaming from the weapon would betray his location and the Cobras would quickly dispatch him.  That was the entirety of the MANTA's value in my childhood....

My childhood disappointment with the toy even went so far as to me never acquiring one as an adult collector.  It simply wasn't on my radar and I never had anything more than a few spare parts show up in various lots I bought over the years.  Now, though, I'm finding a new appreciation for the MANTA and what it brought to the table.  It's a fun toy and a marvelous piece of engineering.  The MANTA is also an excellent example of how the Joe line covered all the bases for kids in the 1980's.  You had big aircraft, small aircraft, big boats, small boats, big land vehicles and small land vehicles.  The MANTA was a way to get a toy that could be played with on water and interact with just a single figure.  You didn't need a massive collection to enjoy it.  For budget conscious parents, the MANTA offered a way for them to get their child a relatively cheap gift that would show up in the mail.  It offered the price point diversity that made the Joe line far more universal that it otherwise would have been.

The MANTA was one of the very few items that never had a retail release.  That was part of what made Joe special.  You could get most of the stuff at retail.  But, a few items were reserved for the mail away program.  And, that helped to engage kids by encouraging them to save their packaging, paperwork, inserts and flag points so that they could get the exclusive items.  If you partook in mail away premiums, you would even get special mail away advertising encouraging you to buy more items through the mail order program.  In the '80's, Hasbro Direct was big enough to act as its own company.  And, in many ways, the manner in which is used data was a pre-cursor to how big online retailers work today.  Hasbro got a list of interested customers from the kids who bought mail away figures.  They then targeted them with additional advertising to get them to buy more.  The only difference between them and anyone who advertises on Google was that they used the mail to conduct business instead of the internet.  But, the core concepts of finding and retaining customers are largely the same.

The MANTA was only released as a mail away between 1984 and 1987.  After that, it disappeared.  Hasbro found a way to integrate the Parachute Pack into the general retail line in later years.  I find it odd that they didn't do the same with the MANTA.  A deluxe figure with the MANTA packed in would have been right up Hasbro's alley in the late '80's and early 90's.  I'll speculate that the vinyl sail was the high cost culprit that precluded the MANTA's return.  But, non traditional materials didn't seem to affect the Target Hit and Run or Sky Patrol.  It's doubtful that the MANTA was unpopular as they are extremely common today: indicating lots of kids had them.  There were some overstock MANTAs given away at an early G.I. Joe convention.  So, Hasbro did have at least some overstock.  But, we never had the chance to see the MANTA return.  While it's doubtful I'd have bought a MANTA in the '90's did it not also include a figure, I would have loved to see a repaint in orange and blue to match the 1986 Wet Suit figure.

Mint and complete MANTAs are not expensive.  Specimens sold with the blueprints run in the $10-$15 range.  If you don't mind a snapped rifle remote control, the price cuts in half.  The sail is notoriously easy to rip.  So, be mindful of sails that look good but have small tears.  For the price, the MANTA is really kind of a must buy.  It meshes will with early G.I. Joe figures and is a fun little item that can make for a good display piece.  Personally, I appreciate a second chance at the MANTA.  It works well with classic figures from my childhood and is something that otherwise doesn't exist in the line.  It's fun to look back at something that was disappointing to me as a kid and find that it does have some redeeming qualities today.  That allows me the wonder of discovering a new toy of my youth all over again. 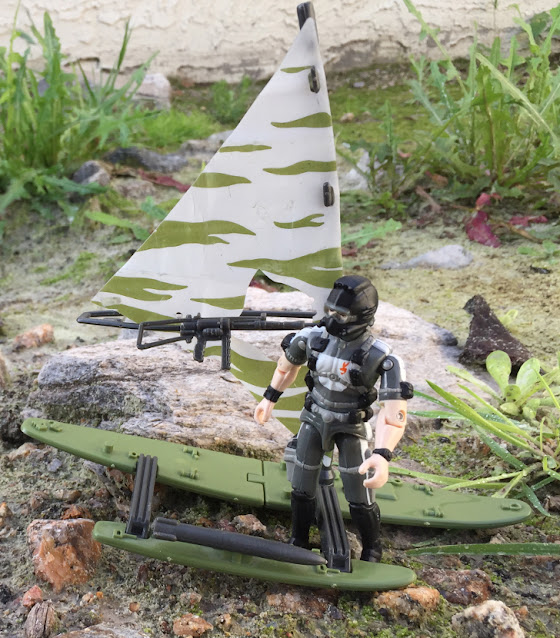 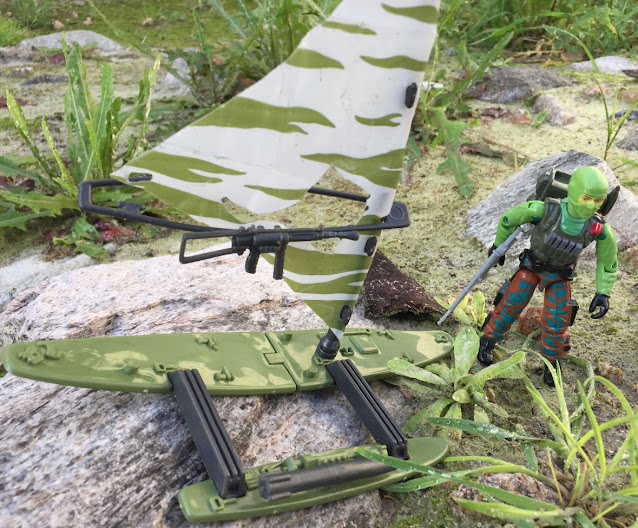 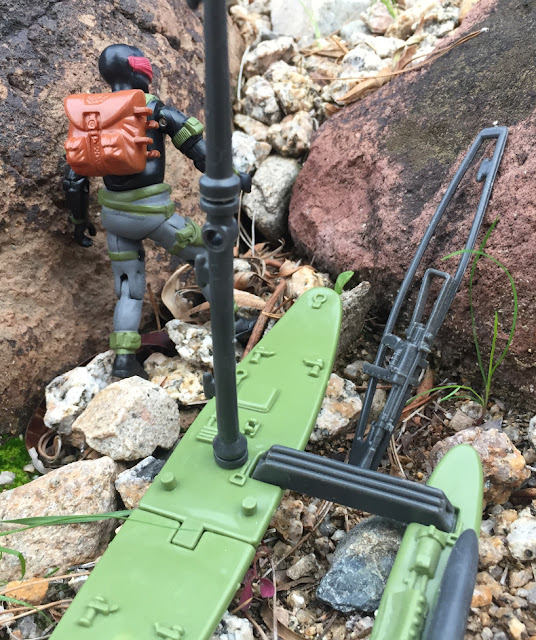 Posted by Robot_Sonic at 1:57 AM
Email ThisBlogThis!Share to TwitterShare to FacebookShare to Pinterest
Labels: 1984, Mail Away, MANTA, Vehicles