Sure, I've already profiled this mold and the Funskool version is, basically, identical to the American figure. However, Flint is one of my favorite characters and this mold of him is one of my all-time favorite figures. Plus, it's been quite some time since I've profiled any Flint figure. Finally, Flint won the most recent Feature Character Spotlight at YoJoe.com and I needed a version of him that I had readily available to showcase.

As I've said before, Flint is, to me, the epitome of Joe. He is the rugged soldier who is not only capable of leading troops to battle, but also of inspiring them to outperform even their most lofty expectations. This figure perfectly captures what is, to me, the essence of the character. His look is slightly military, but has enough uniqueness to it that you can see Flint's strong personality show through. His countenance is brash and shows great insight into his characterization while not being too over the top. His colors blend well together to allow for his use in forests, night ops, jungles, urban campaigns or just about any other environment. His accessories complement him perfectly and stick out from the traditional fare that most Joes seem to utilize. It is his uniqueness that makes the figure, to me, indispensable.

I consider Flint the hardcore combat leader of my Joes. If there is a mission that is considered too hairy, Flint is the first to volunteer. He is open to operation in any climate and works well as the leader of just about any Joe. To this day he remains a figure that is a staple in my dioramas. Having this Funskool version widely available has made it possible for Flint to retain that position of prominence for some time. I'm no longer worried about paint wear or lost accessories as I can easily replace them now for under $5. In fact, I would never have attempted a few of the pictures below were the Funskool Flint not so easy to acquire. The fear of damaging so important a figure in my collection would have been too great.

Back in February of 1985, I found my first cases of new Joe figures. While it was sensory overload at the time, I managed to convince myself that I wanted Footloose and Airtight. I was familiar with Flint from the cartoon that aired the fall before and actually wanted him most of all. However, the Flint's I saw all had their heads drooping in the package. As I did not know that the Joe head articulation had changed for 1985, I thought these figures were broken. So, I passed him by. That proved to be a mistake as I didn't find another Flint for many, many months. He became my Holy Grail of the day as I desperately wanted to add Flint to my collection. When I finally did acquire him, Flint became a mainstay in every mission I undertook. In fact, he was so used that I wore out my original figure and had to replace him in the same year. I ended up buying another Flint from a friend in early 1987 as I had lost both of my existing Flint guns. Even that third one ended up in bad condition. He was just a figure that I had to keep at the top of my collection.

In late 1987, my local comic shop got in a few issues of the UK "Action Force" comic. Naturally, I bought an issue to see what it was. I was fascinated by the UK exclusive stories and really liked their portrayal of Flint. That continuity used Flint as the leader of the Action Force and had him less American that his G.I. Joe portrayal. If you have occasion to pick up some of those old "Action Force" issues, I highly recommend it. Some of the stories are very well done, use some different characters, and are quite a bit different from the American fare.

When the Funskool Flint was re-released in 2002, an interesting thing happened. At that point in time, a mint, complete American Flint figure typically cost around $20 or so. Within a month or so of the Funskool re-release's arrival in the U.S., though, that price plummeted to nearly half the quoted rate. The reason was simple: many collectors who wanted a nice, complete Flint figure for their collections now had an acquisition alternative other than Ebay. This essentially took hundreds of collectors out the market for American Flint figures which then dropped the price. This is not a bad thing. However, it does provide a model that can be extrapolated to some of the new Hasbro released figures as well. Many collectors out there only collect one of every character or one of every figure mold. As Hasbro pulls out more and more and more ARAH-style molds and repaints them in exclusive figure sets many collectors will have a shot at some molds that might have previously eluded them. In turn, this will remove many collectors from the market for the repainted mold's original figure. In the case of many Joe figures, that will not really be of major significance, but it is something to remember as old molds are dusted off and put into production.

There are actually several variations of the Funskool Flint figure. After this mold's run in the U.S., it was scheduled to be released in Argentina. (Flint appears on some of the latest Argentine cardbacks.) He was not, to the extent of my knowledge, though, released there. He was, however, released in Brazil. From there, the mold was send on to India. At some point in the Flint mold's history, the arms were either lost or rendered unusable. As such, all Funskool Flints have variant arms from the American figure. (If you look at the prototype Night Force Flint from the 2003 Convention photos, you will see that he also has new arms.) The earliest figures used lower arms from the '92 Roadblock. At some point after that, Funskool switched the arms and some late '90's or so Flint figures actually have the lower arms from Zandar. (Both of these figures are also available with elbow joints that are black: matching the upper arm rather than the flesh colored forearm.) In 2002, Funskool reverted back to the '92 Roadblock arms. Not satisfied with these variants, though, in 2003, Funskool decided to change the upper arms of the new Flint figures to feature the mold originally used for Blaster. These figures also feature much brighter green on the paints, lighter brown on the gloves and visually distinctive backpack colors. Not to be outdone, though, Funskool produced a final batch of figures in early 2003. These figures were only available bagged but use the upper arms from Blocker. The forearms are still Roadblocks, but the upper arms differ. You will also notice slight color differences in Flint's based on their time of production. Usually, they are subtle and hard to recognize if you don't have the figures sitting next to each other. It should also be noted that Flint's accessories vary in color. They can range from a dark green like the American weapons all the way to a light brown. The variants on both the figure and accessories are minor and are hard to notice. However, it does give Funskool collectors something else to track down. (You can see the three modern variants and some of the accessory differences in the comparison photo below.)

Funskool Flints are not too hard to find. Funskool re-released him in 2002 and then again in 2003. As such, you can get either carded or bagged Flints from most online dealers. However, now that the mold appears to be back in Hasbro's hands, the supply of Funskool Flints will, eventually, dry up. As such, now is a good time to acquire any of these figures that you might desire. He is so close to the American mold that this figure is interchangeable with the original figure and provides a cheap alternative that meshes well with any collection. I've basically retired my American Flint figures and only use my Funskool version. The figure is of excellent quality and provides an easy way for new collectors to revisit a truely classic mold.

While I'm well set for Funskool Flints, I do need one with Zandar's arms. If you can help, let me know. 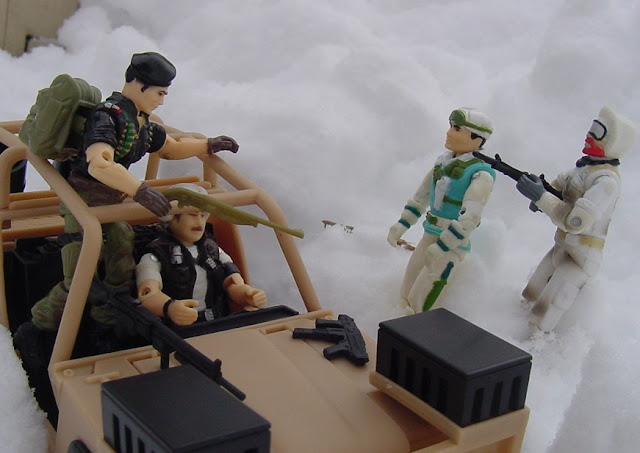 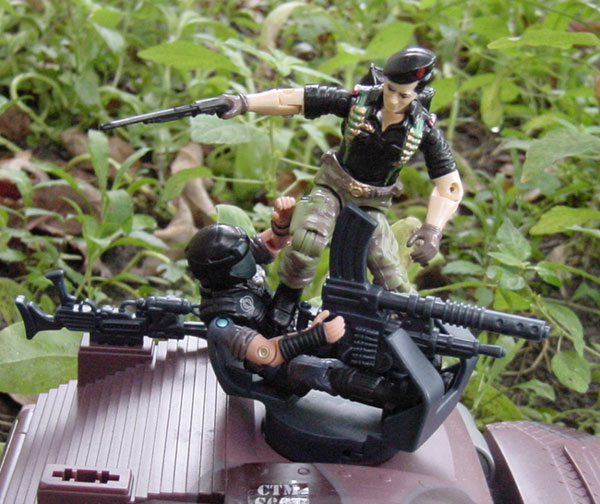 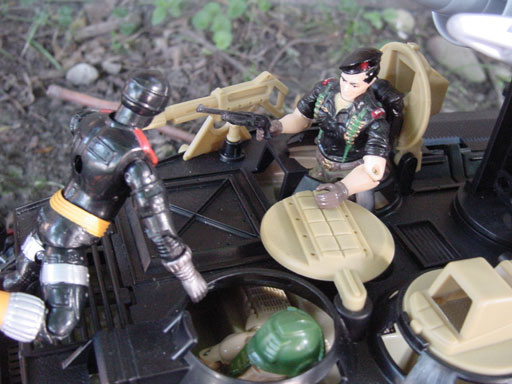 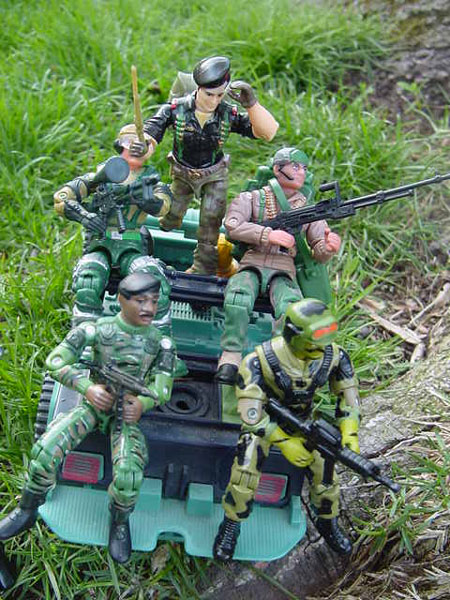 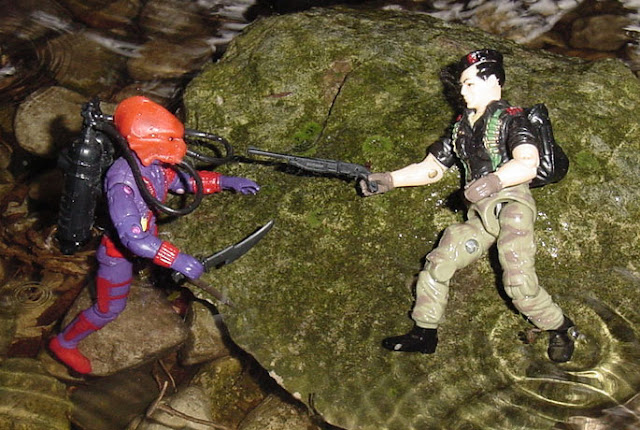 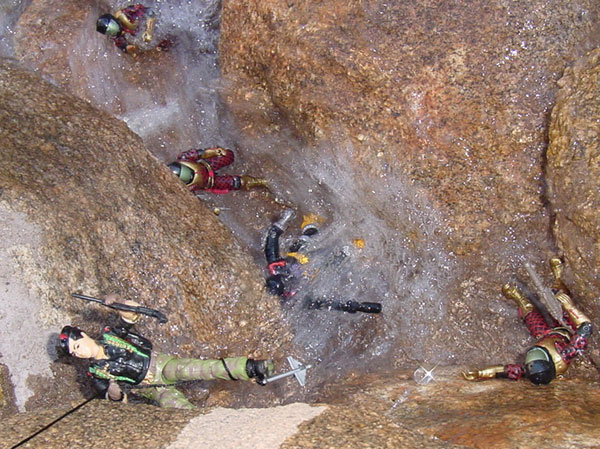 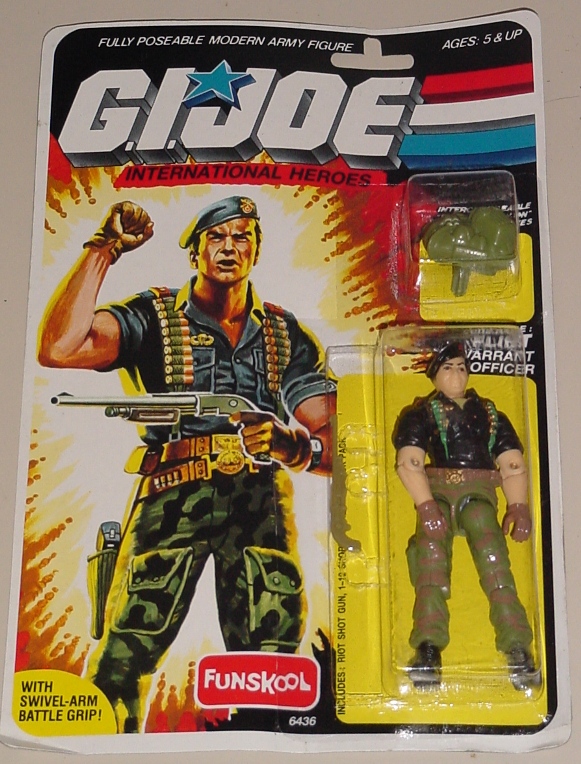 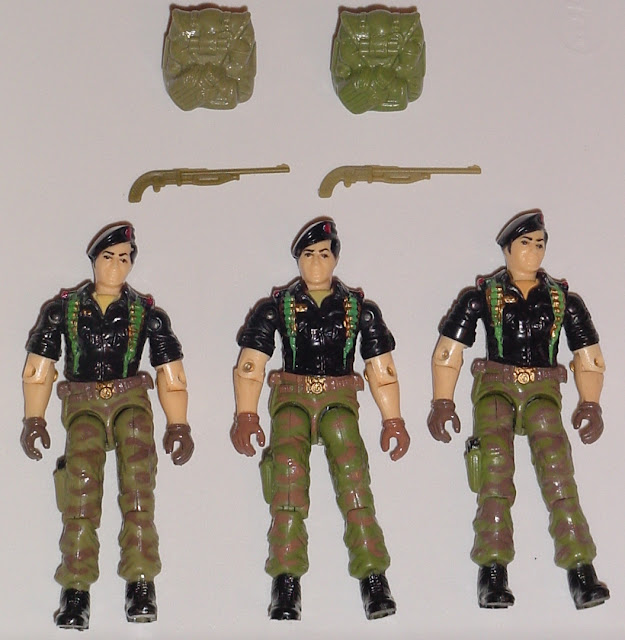