Along with Shipwreck, Law and Spirit, Tollbooth completes the G.I. Joe homage to the Village People. This bit of humour hasn't been lost on many current satirical shows that have taken hold of some of the more outlandish Joes. But, beneath the orange helmet, sallow face and skinny mold lies a figure that has an understated design that befits the character's specialty. Tollbooth is the perfect forgotten Joe who is a strong match for his vehicle and draws his value to a collection from his affiliation with a toy that plays an important role in any collection.

The Bridge Layer is a toy that appears to be somewhat boring when you first come across it. It's pretty basic. Though it's well detailed, it doesn't do a whole lot. Yet, it remains a toy that is incredibly useful and fun to have around. As a kid, I can't remember all the times that I needed a bridge to get my Joes across a swamp, over a ditch or just up the stairs. Enter the Bridge Layer. In my childhood room, the main chamber was at the end of a short hallway. The hallway had one small step that allowed the actual bedroom to be lower than the hall so it was tall enough to use. This was my primary place of indoor play as a child so I always needed some way to get the Joes up, over the step so they could engage the attacking Cobras from the hallway. The Bridge Layer served a dual purpose of both moving the Joe heavy equipment over the obstacle, but also as shelter. Stood on its sides, the bridge made for a strong shield behind which the Joes could avoid blasts from Hiss Tanks and Stuns.

I learned of Tollbooth before he was fully released. Some friends of mine had seen the Bridge Layer at Sears stores during Christmas of 1984. I had not seen the Bridge Layer, though I had found the Dreadnoks. As they told me of this new vehicle and its driver, I didn't believe them. When I finally found a 1985 catalog and saw the Bridge Layer, though, I had to have one. However, I could not find one for a good long time. I finally found one at a Sears store in Dayton, Ohio when visiting my grandparents near Easter. (I still remember the shelf configuration and seeing the Bridge Layer on an endcap.) As soon as I got the vehicle home, it quickly became my first vehicle of choice. With the bridge attached, the top of the vehicle was a perfect place for my new '85 Joes to ride. I set Flint, Snake Eyes, Footloose and Alpine as the main crew atop the tank with Bazooka as Tollbooth's co-pilot in the main vehicle. This meant that Tollbooth took on a greater role in my collection than a figure of his design normally would.

While I found some charm in Tollbooth's figure, my friends from down the street were more grounded. They ridiculed Tollbooth from the get go and often made fun of his drunk face, hyperbolic open shirt and cockeyed helmet. The figure makes the character look slow. Rather than that, though, I viewed Tollbooth as a typical heavy equipment operator who understood the power of the vehicle he was operating and who had full knowledge of the consequences were he to be off in a bridge placement by even only a few inches. I saw his face as hardened experience that allowed him to operate a vehicle under that kind of pressure while he was also under enemy fire. Plus, his sledgehammer made him an interesting combatant for any Cobra foe who happened to get too close to the Bridge Layer during the course of battle.

As the Bridge Layer remained a staple of my Joe convoys for many years, Tollbooth saw more action than a figure like him normally would have. As such, my original figure quickly found himself with a broken thumb and crotch. While this normally would have been the death knell for any figure in my collection, Tollbooth managed to stay relevant. As he was rarely used outside his vehicle, the figure was still usable in that capacity. It was only after the Bridge Layer was phased out of my collection that Tollbooth finally disappeared from my use bin. As an adult, I was slow to re-acquire a new Tollbooth figure. He simply wasn't important enough for me to add now that vehicles were boxed away. Finally, though, I crossed him off my list of needed figures and have enjoyed having him back in the fold that as he helps complete my vintage collection.

The Bridge Layer, though, is a different story. I had at least 2 of them at one point in my adult collecting life and am pretty sure the overall number was at 3 for a little while. I have no recollection, though, of selling any of them. As the vehicle was an important part of my childhood, I liked having one around: even though I had no place to display it. However, it now appears that all my Bridge Layers are gone. I can not find any of them. As such, Tollbooth's relevance is severely limited. Had I even one Bridge Layer left, Tollbooth would be at the controls with most of my other favorite '85 figures adorning other spots of prominence on the vehicle. One day, I'll probably replace my Bridge Layer and pick up another. They're not expensive. But, I have other collecting priorities these days and adding more vehicles that take up space in boxes that make good scorpion nests out in the garage is not one of them.

As a figure, Tollbooth fits in with the other releases from 1984. But, he is largely out of place in 1985. He does have some decent detail. But, the head design isn't perfect by any means. The open shirt also dates the figure as it exceeds the standards for acceptable sloppiness and is brazenly in the territory of a 1970's disco king. The vest and waist do mesh well together, though, and give the figure a credibility as a heavy equipment operator. The figure's colors are strong, but the bright orange helmet does take away from that a bit. The inclusion of a sledge hammer as Tollbooth's accessory also grounds the figure in his utilitarian roots. Tollbooth is definitely a worker for the Joes more than he is a fighter. But, the design is such that this is OK and it helps to keep the Joes more grounded in realism.

Tollbooth uses the legs and lower arms from Gung-Ho. Other than that, the rest of the figure is original. But, it was also never used again. However, Tollbooth was one of just 5 figures with the straight head joint newly released in 1985. As such, he was obsolete the day he hit the retail shelves. As the Bridge Layer was an exclusive that hit in late '84 (along with the Dreadnoks) it makes sense that he used the older body style. But, that poor timing also relegates the figure into obscurity since he was dated so soon after his initial release. The mold lacks any real potential and would be hard pressed to repaint in any manner that would justify a return. The character, though, could be salvaged. The Hardtop head would be a good update for Tollbooth and I think that someone could make a figure that is a worthwhile update of the character with existing parts.

I would welcome that because Joe can always use more vehicle drivers and armour operators.
If you want a Tollbooth, they are not hard to find. The figure is subject to paint wear, though, so mint versions aren't as common as many collectors think. The filecard is also usually missing. But, even fully complete and mint, the figure rarely will run you more than $6 or so. He just isn't a figure that collectors care about. But, if you like the Bridge Layer, it is essential to have a Tollbooth figure. He fits in with the vehicle and brings an air of realism to the Joe line. He will never be a figure of great importance in any collection. But is a figure who serves a role and serves it well. The strength of the Joe line is the supporting characters. Tollbooth is just another example of how well planned the vintage Joe line really was. 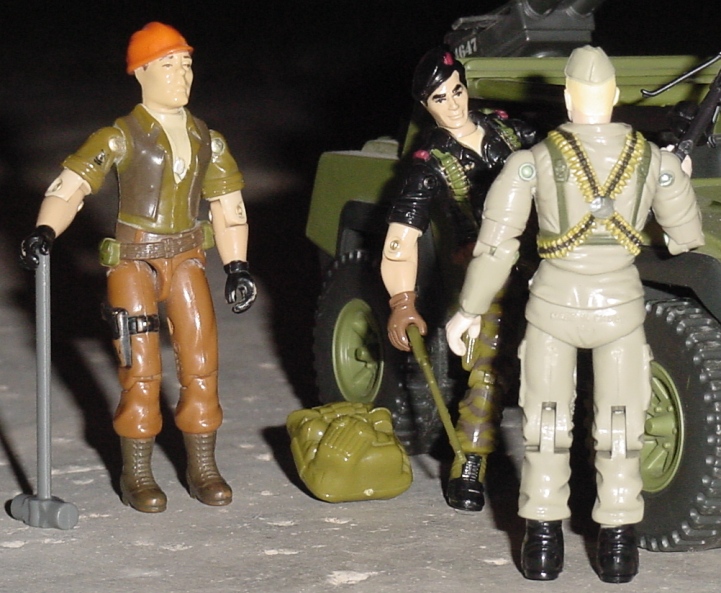 Posted by Robot_Sonic at 11:18 AM
Email ThisBlogThis!Share to TwitterShare to FacebookShare to Pinterest
Labels: 1985, Tollbooth, Vehicle Drivers