In the late '80's, Hasbro was offering many, many figures via mail order. The vast majority of these were simply reissues of figure molds that had been "retired" from retail. Others, like the Hooded Cobra Commander were never available via retail outlets. Joe was flying high in popularity, and corporate support. As part of the plan to keep the Joe empire ever expanding, Hasbro licensed a cereal based on G.I. Joe. To get kids to eat this tripe, they offered an exclusive mail in figure that was only available if you bought the cereal: Starduster.

I never had a Starduster. Apparently, I was not alone in this. The G.I. Joe cereal was short lived. The mail in promotion for Starduster was even shorter lived. However, he did come back several other times as a mail in available from Hasbro Direct. The thing was, as a kid, I wasn't interested in this guy. He was in powder blue. What kind of hard core soldier wears powder blue?!? (Of course, as a child, I never went to the fact that it was to blend into the sky. Perfect cover for a jet pack trooper who would be seen by looking against the blue sky background.) Because of this alone, Starduster was nothing more than an afterthought to me. Much like the Steel Brigade and Joseph Colton, the pictures of the figure were not enough to entice me to the offer, even if the figure was one that would never be available via any other avenue.

Now, though, Starduster has a kitsch about him that makes me like the figure. The soft, pastel blue is actually easy on the eyes and offers some welcome relief when he is displayed among most of his contemporary Joes. His helmet and dark visor are nice touches that proved the original Joes could be improved upon. (The black visor is also highly reminiscent of the prototype Joe photos that appeared in the very first insert catalog back in '82. All the visored Joes had dark black visors that are nearly identical to Starduster's. Were Starduster's visor not so problematic to find, I think it would be very cool to put together a set of these original Joes outfitted as they were back in '82. Now, if I could only find those concept Cobras they put in there as well!) The silver version of Gung-Ho's grenade launcher is also nice. It is not so out of whack that you could dismiss totally. Also, the very fact that he comes with just the jet pack from the JUMP is enough to make me now wish I had actually picked up a couple of these guys back in the '80's. That accessory is enough to make this guy someone that would have seen some use. Though it probably would have been as an officer as other, more suitable, figures would have actually donned the jet pack.

There is something very interesting about Starduster. Back in late 1985, a comic Marvel produced entitled Marvel Age had a special issue on G.I. Joe. This "comic" was kind of an insider magazine that gave the reader a preview of the comics Marvel released that month, but it also allowed them to spotlight whatever property it was they wanted to promote. In issue #34, it was Joe. Here, they profiled many of the new Joes who would join the team and have toys made of them in 1986. The original art that had some off colors is interesting in itself, as was the mis named character named Hot Spot who later became Sci Fi in the actual assortment. The most interesting profile they offered, though, was of a new character named Hedge-Hopper. Hedge-Hopper had no art affiliated with him, but he was supposed to a jet pack trooper. This made sense as only the recolored Silver Pads Grand Slam had already had a specialty anything close to this. For whatever reason, though, Hedge-Hopper was not to be. The figure was never released and the character never came to light in any Joe arena. However, in 1987, Starduster was released. While the two could be entirely separate entities, the coincidences are too great. Most likely, Hedge-Hopper was a placeholder name that was used to identify the jet pack trooper. Due to some unknown circumstance, the character never panned out. Perhaps they felt the notion wouldn't be enough to carry a figure at retail. It might also be that they had the G.I. Joe cereal promotion planned and wanted to use a throwaway character on it. Whatever the circumstances were, though, Hedge-Hopper is an interesting footnote to Joe history of which not too many people are aware and adds more obscurity to the Starduster character.

Like Super Trooper, Starduster only appeared in Joedom as a figure. However, his earliest versions came with some mini comics that were supposed to give kids some sort of background they could apply to him. Hasbro, though, always wanted the mainstream comic and cartoon to push what was for sale on the shelves. Upon reading his filecard you quickly realize that there wasn't a whole lot of thought put into this guy's characterization. Being an obscure mail in, there was no way he was ever going to have any credibility among the Joe creative team. For that reason, it reinforces my opinion that this guy was just a cast off concept that could never get out of the creative strategy meetings in Rhode Island. The fact that he did make it to a figure, though, makes you realize that there must have been some other concepts bandied about that were truly terrible. (Look no further than the supposed "Chef" concept art. {shudder}) It's too bad, though, because the notion of a jet pack trooper was something that I think kids would have gotten into. Of course, he would have needed to be a much cooler figure than Starduster, but I think that a singularly carded jet pack trooper would have experience retail success.

Many collectors have been lead to believe there are three distinct versions of Starduster. However, in recent years, many hard core collectors of substantial resources have been trying to prove the existence of the Version "B" Starduster figure. In the past 6 years in which I have kept track of such things, no one has found any conclusive proof that the Version "B" figure actually exists as a legit variant. There are loose ones out there, but they are almost certainly Frankensteins of broken Version "A"s and Version "C"s. Until a solid amount of bagged version "B" Stardusters are found, I think it is safe for collectors to consider their collection complete if they only have the Version "A" and Version "C".

Stardusters are a bear to find. The first version from the cereal that uses the Recondo chest is the toughest and is usually rated by serious collectors as one of the 5 most difficult figures to find in the entire line. Even the more "common" variations of Starduster, like the one below, are seldom seen. Because of this, mint and complete versions are very, very pricey. Bagged versions of the Recondo chest Starduster can easily get into the $80-$100 range. Even loose, mint, complete specimens of the most common versions will set you back $30! The thing that makes Starduster hard to find is that he was only available as a mail in and he was just a repaint of a swivel head mold in a time when the ball headed molds made the figures so much better. He is also prone to heavy discolorations and finding mint Stardusters can be very frustrating. I have found many Stardusters who have been subjected to cigarette smoke and are now permanently ruined. His lack of popularity in his own day has manifested itself by making this figure among the rarest American Joes today. Fortunately, the powder blue takes away from the figure and keeps this guy from being at a price point where he would rival such things as the Mickey Mouse Cobra Commander in value. Personally, I've found this figure to be only useful as he is required for the completion of my collection. Aside from that, he seldom, if ever, sees any use. His specialty is cool, but there were so many other figures released whose molds lend themselves to something like this so much better, like the 91 General Hawk, that I haven't found him to a vital part of my collection. Perhaps, someday, that will change. For now, though, Starduster is one of those frustrating figures that I can't acquire for a cheap enough price for me to justify additional variations.

The version of Starduster you see below is the only one I have. Of course, I have two separate figures for that version. If you have a different version, or his visor, email me. 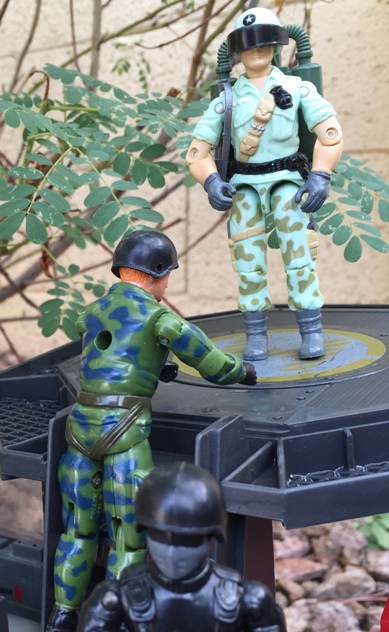 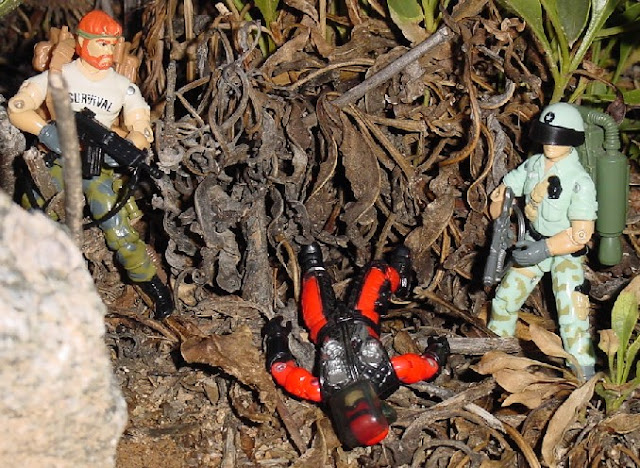 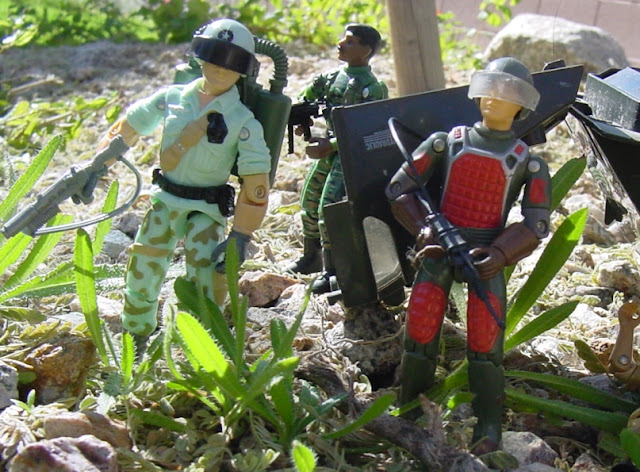 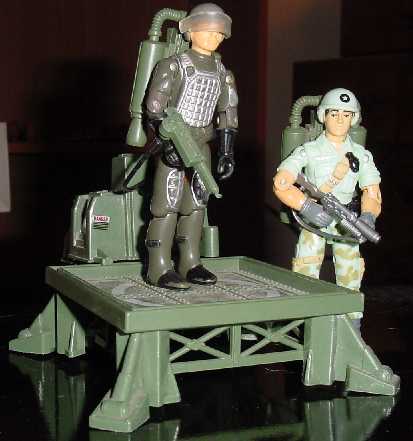 Posted by Robot_Sonic at 2:19 PM
Email ThisBlogThis!Share to TwitterShare to FacebookShare to Pinterest
Labels: 1987, Mail Away, Starduster