1993 was the year of the mail in. By 1993, Hasbro had lost its focus with the Joe line. They released nearly 100 figures to the market that year and none of them had any real direction. With the line's demise a possibility, Hasbro turned to mail in premiums to help move old stock that was clogging the retail shelves and diminishing retailer's confidence in the line's selling potential. 1994 was on the horizon and that was G.I. Joe's (as a concept, not just ARAH) 30th anniversary. Hasbro wanted the brand to be front and center for this milestone but was hampered on the 3 3/4 end by the surplus of product that stores just couldn't liquidate. To help facilitate retail sales, Hasbro offered nearly a dozen new mail in exclusive figures that required the flag points from the shelf warming product. However, day glow neon color schemes and poor character choices limited the mail in figures' appeal and the demand simply was not realized. (This was not the case, though, in 1994 when they offered Joseph Colton as a mail in exclusive.) As such, the retail product sat on the shelves well into 1995 and the mail in figures ended up being liquidated at insanely cheap prices so that huge quantities ended up in the hands of dealers. (Many of whom still have large stocks of these figures today.) Lost in the disaster that was 1993, though, are a handful of excellent figures. Among them are a few mail ins that I've already profiled. Of the mail in sets, perhaps the most ubiquitous and well know is the Arctic Commandos. While most pine away for some of the Snow Serpent figures from that set, it is one of the Joes who will be my subject today: Sub Zero.

Sub Zero was originally released in 1990. Like most 1990 Joes, he has a good sculpt and awesome accessories. However, he did suffer from one little flaw. To complement his basically white design, the designers chose to augment him with powder, baby blue. While it kind of works for an Arctic trooper, it does limit the figure's appeal. When you couple that with the fact that Sub Zero is an Arctic trooper and they, as a whole, tend to be much less popular than other figures, it is easy to see why this figure has been largely overlooked by the fan community. The 1993 Arctic Commandos set, though, finally offered us a Sub Zero with better color choices. While the new dark blue color would blend less with white snow, it does make for a more aesthetically pleasing figure. It also highlights the strong points of the figure mold. Showcasing lighter colors off of a darker base shows the level of detail that this figure still received. It also helps to make him more believable as a true Arctic soldier.

For me, that's what this figure is. He is just another Arctic soldier. He is not named and I utilize him as an army builder for the Joes. Snow battles are fun and this figure offers a range of specialties that make him vital for my Arctic operations. He can be outfitted with the original Sub Zero's accessories (he has a great machine gun and a large pack) and made into a more specialized Arctic gunner. I also give him smaller, lighter rifles and make him the basic Arctic foot soldier who forms the frontline against a Cobra Arctic attack. His darker colors also work well if you want to use him as vehicular support for your Arctic tanks. He has a wide range that you can take advantage of if you utilize his lack of characterization in Joe media to create your own persona.

Had Joe survived to 1995, there would probably have been another Sub Zero figure offered. As the Battle Rangers figures would have brought Joe back towards its more military roots, it appears that Hasbro was also going to offer other, smaller subsets that would follow the same theme. YoJoe.com has a picture of mocked up box art for a set of proposed Arctic Commandos that would have been released in 1995. From the box art, the set would have come with a repainted Mudbuster jeep (which is a fun toy to have!) and a repainted Locust helicopter. (The one from the '90's, not the '00's.) It would also have included two figures. One appears to be a repainted 1993 Beach Head. The other figure appears to be this very version of Sub Zero. The color scheme closely matches what was released on this figure and the Beach Head appears to be holding the version of Dodger's gun that was this figure's matched accessory. Whether that figure would have been a third repaint of the Sub Zero mold or just a retail release of the mail in exclusive figure will probably never be known. At any rate, it is just another footnote to what Joe would have become had it made it into 1995.

The 1993 mail in Arctic Commando set is not hard to find. If you are patient, you can usually get an entire MIB set of 4 figures for under $20. (Be sure any complete set includes the Dee Jay figure. He was bagged separately and is often missing from most of the Arctic Commando sets that tend to be offered.) As you get the super cool Snow Serpent as well as this figure, it is money well spent. Really, it is easier to find this mail away figure than it is an originally colored, complete, mint Sub Zero. As I like this color scheme better, though, that's not a problem. This guy is a great example of an obscure original figure that was redone as a more obscure mail in. As he is readily available, though, he makes a great way to add a lesser known, but high quality figure to your collection. A guy like this tends to be what I like most about Joe collecting. Sure, finding "rare" and expensive figures is fun, but the guys like this make the hobby. You can use them for their intended purpose with no fear of a high replacement cost. As Joe prices continue to rise as the new releases gain popularity, figures like Sub Zero are a breath of fresh air that remind you of why we got into Joe collecting in the first place.

I've got all the Sub Zeros that I need. I would, though, like another Artic Commando Dee Jay, or the International Action Team mail in set. If you have any of those for trade, email me. 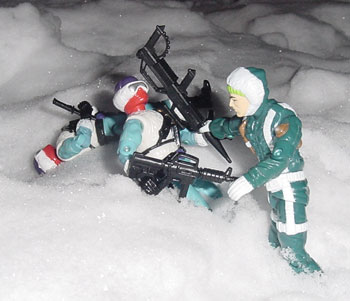 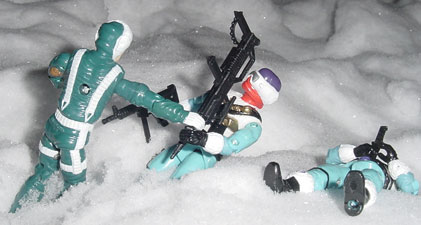 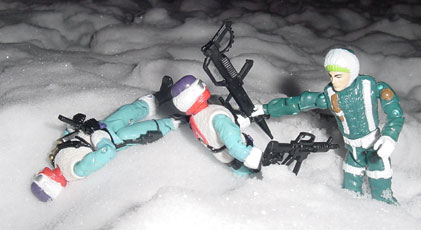 Posted by Robot_Sonic at 2:09 PM
Email ThisBlogThis!Share to TwitterShare to FacebookShare to Pinterest
Labels: 1993, Mail Away, Sub Zero