The Snow Serpent is the overlooked 1985 Cobra Army builder.  He's certainly not the worst figure from that year.  But, the arctic specialty dooms him to a lesser role than a figure of his excellent design would normally enjoy.  The Crimson Guard is one of the most iconic Cobra army building figures. The Eel is the de facto standard against which all other Cobra divers have been measured. And, the Tele-Viper is just a staple for pretty much every Cobra outpost, base and large vehicle due to his ubiquitous specialty. The Snow Serpent, though, is more niche. If you have an arctic mission, this is your first choice of figure. But, for most kids in the '80's, playing out in the snow with your Joes was a seasonal treat rather than a typical day of play.

In late 1984, the Dreadnoks were available at Sears stores.  My friends and I got them all for Christmas that year.  One of the great anticipations for Joe fans between 1983 and 1985 was not knowing the code names for the figures that would be released that year.  The cardbacks only referred to the figures by specialty.  So, we had great fun in trying to figure out the code names of all the characters on the cardbacks.  Between Flint, Lady Jaye and Shipwreck showing up in the cartoon early, the Crimson Guard appearing in the comic book and names that were listed in the copyright info on the comics early in the year, my friends and I were able to come up with the names for all the figures except one.  The Cobra Polar Assault trooper simply did not appear anywhere.  On top of this, no one could find the figure at retail.  We went several weeks not knowing this figure's name.  Finally, I found one at a Target store.  I went home and called my friend.  He was outside and his phone rang about 20 times before he heard it came in.  (Remember the days with no answering machines or voicemail?  Man, I'm starting to feel old.)  He was ecstatic when he heard the name Snow Serpent.  It was a vile and sinister name for a Cobra villain.

In the case of the Snow Serpent, the name lived up to the figure.  As a sculpt, the Snow Serpent is fabulous: well detailed with perfect coloring.  The accessories are about as perfect as you could get for the time.  The result is a complete package of a figure. The white combined with grey and blue stays true to the standard Cobra color palette while also keeping the figure in line with his environmental specialty. The detail on the mold is amazing and incorporates the airborne and arctic elements seamlessly. The figure's head is a bit odd. The solid black face mask loses some of the details. A simple eye paint mask would have broken this sea of darkness up nicely. But, the head is menacing and that's really the goal of the early Cobra figures.

One of the oddities about the Snow Serpent, though, is that he is actually two first time Cobras in one. He was the first Arctic themed Cobra Trooper. But, he was also the first airborne assault Cobra Trooper. The figure is designed with base parachute harnesses as part of his uniform. The inclusion of the parachute pack only reinforced the notion that Snow Serpents were designed to fill two specialties at once. This could be a function of Hasbro incorporating the airborne specialty as a way to keep the figure in kid's play patterns during warm weather months. Or, it could just be that they were trying to pack as much into a figure as they could. Regardless, the combination specialties help to make the figure stand out, even when taken against the later release Cobra cold weather troopers.

The Snow Serpent included an exceptional amount of accessories for the time. The figure started with the basics of a large backpack and an AK-47 assault rifle. The AK-47, though, was not the original sculpt from the Cobra Officer. Instead, it was a new sculpt that was thicker, bulkier and featured a new stock. In short, it was a substantial upgrade over the original Cobra weapon. The pack was large, but had a neat little engineering feature. The Snow Serpent also included an anti-tank missile launcher with stand. This launcher could neatly plug into the side of the figure's backpack. (The Snow Serpent I had as a kid, though, was irregular and his launcher never could fit on the peg.) This allowed the Snow Serpents to carry their full load of weapons without having to awkwardly pose the blocky missile launcher. If that weren't enough, though, the Snow Serpent also included a parachute pack that attached around the figure's waist. This wasn't a working accessory. But, it was a great detail that showed the Snow Serpent's versatility. The figure was topped off by a pair of snow shoes to assist with the snowbound marches. In short, the figure had everything you would expect of a arctic combat trooper.

In my collection, Snow Serpents were the best of the best of Cobra Troopers.  Somewhere, I got it in my head that Eels were taken from the ranks of Cobra's best.  So, the logical extension of that was for the Snow Serpents to be the elite fighters in Cobra's army.  Despite being themed for cold weather, I had Snow Serpents be the most devastating fighting unit against which the Joes could match up.  Often, Snow Serpents would hold their own against Joe forces of equal or even greater numbers.  They were that good.  There were very few of them.  So, when the Joe managed to kill one, it was an event worth noting for any hero.  Even as my vintage figure broke down, the notion of Snow Serpents being the best remained and the Joes were always on the lookout for any appearance of one.

In time, though, the Snow Serpents began to fade from my childhood play pattern.  Ostensibly, the reason was that the 1986 Cobra Viper was released and that figure gave me a newer, well equipped Cobra Soldier to fight the Joes.  But, at the same time, my lone Snow Serpent figure had taken a beating.  His rifle was lost, his missile launcher was broken, his parachute buckle was ripped and, after spending a few too many days outside, the figure and his backpack were caked with deep rooted dirt that just made the figure tired.  So, the Snow Serpent slipped into oblivion.  As an adult collector, though, the figure never made a comeback.  Living in the desert, I didn't have great need for arctic figures.  But, the reality was that my focus was on acquiring 1991, 1993 Mail Away and 1998 Snow Serpent figures.  Their sleek design, cheaper price and high quality mold made them more interesting to me than the traditional, plodding figure from 1985.  It was only through acquisitions of collections that I added a few original figures to my collection.  But, today, I am glad I have them.  The figure's classic design and vintage release year combine to make him a must have for me.

The Snow Serpent was one of the very few 1985 molds that never left the U.S. After his 1985 release, the mold went quiet until 1992. In that year, the head appeared as part of the nicely designed but poorly colored Heli-Viper. The mold then disappeared again until 2006. Then, in a surprise move, Master Collector found the mold and released it as part of the Operation Flaming Moth series of figures. This new figure did not have the classic Snow Serpent accessories and the high price point coupled with decreased Joe demand lead to a disappointing re-release of a classic. After that, the mold went silent. Really, though, there isn't much that could be done with this figure. The original is just about perfect. So, any attempts at repaints would likely suffer from those lofty expectations. So, it's probably best that the Snow Serpent is most know for his original release.

In the early 2000's, Snow Serpents were pricey.  But, when the army building bug was sated, their prices fell.  Today, mint and complete figures can be had for around $15-$18.  Be aware, though, that many of the figures in this price range actually have paint wear.  The figure's face is notoriously susceptible to paint damage and it's common to find a little paint missing from most figures in the market.  This isn't a terrible price at which to army the figure.  En masse, Snow Serpents are quite imposing.  Even as a single figure, the combination of quality sculpt, realistic colors and excellent gear make for a perfect display candidate. Overall, the best year for Cobra army builders is debatable. But, 1985 makes a strong case and the Snow Serpent is a shining example of why. 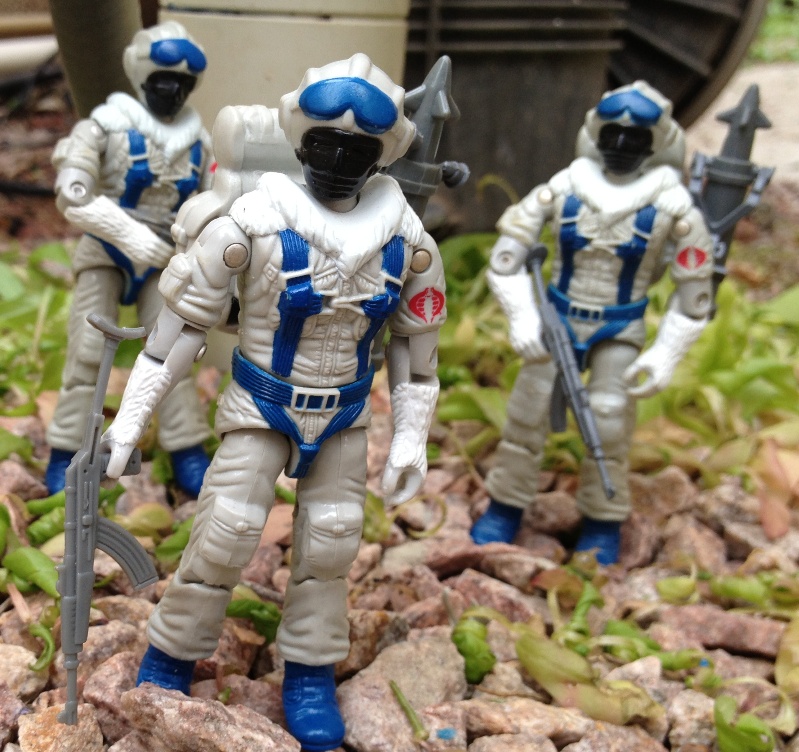 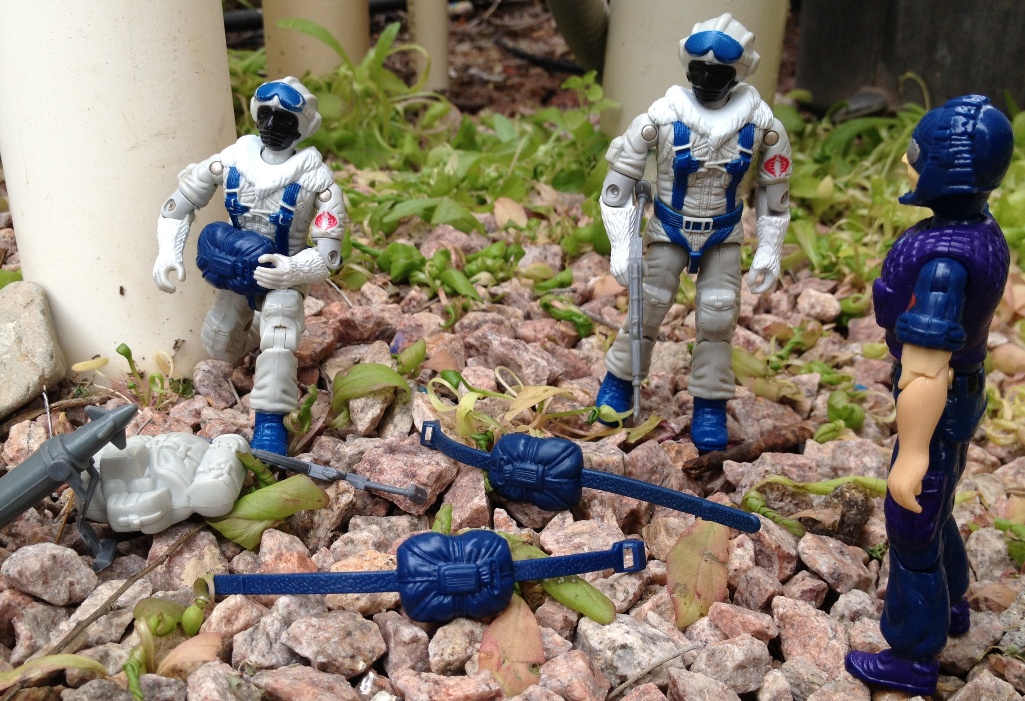 Posted by Robot_Sonic at 10:40 AM
Email ThisBlogThis!Share to TwitterShare to FacebookShare to Pinterest
Labels: 1985, Snow Serpent