Back in the late '90's, I was on a quest to find many of the neon figures from the final years of Joe's original run. For some reason, I was really drawn to wacky, offbeat colors that many of these figures offered. In my zeal to build my collection in this direction, I made 1993 the single most common year of figures in my collection. As such, there were very few 1993 figures that I do not have. However, one of the few I am missing is also one of the most unique and cool figures produced that year: Mirage. For whatever reason, he was the lone member of the Mega Marines subset that I was never able to pick up in any of the large figure lots I used to buy. However, earlier this year, news of a new wave of classically articulated Joe figures leaked out. While most focused on the return of 2 classic army builder molds (the Viper and Alley Viper) I focused on a new Joe repaint. It seemed that Hasbro was going to re-release Mirage, but in a radically changed color scheme. Once I saw the first pictures, I was hooked. Once I was actually able to acquire the figure, my opinion of him did not change. He is something that I've long wanted and a figure who immediately became a staple in my collection.

Frankly, this Mirage figure is what I've been wanting to see out of the repainted classic Joes since they were first released in 1997. As any fan of this site knows, I'm a big fan of many of the later release Joe figures. The reason is that many of the sculpts are nothing short of fantastic, but they suffer from unfortunate paint schemes. The repaints offered an excellent opportunity to reproduce many of these under appreciated molds in new color schemes that really showcased how cool the figure truly was. However, while we did see many later mold figures redone, they were, for the most part, completely uninspired and showed a lack of creativity and originality that left me feeling unfulfilled. However, this Mirage figure is finally a step in the right direction. Hasbro took an awesome mold and colored it in a way that makes for a great figure. The sharp green and black contrasted with subtle brown and silver makes for a striking visual while not sacrificing any realism or usability. This figure proves that not every new release has to be colored the same as the '01 Sidetrack. Back in that profile, I warned of this practice, yet that was what we got. It is nice that they finally deviated from that a little with the Wave 1.5 figures, but it is sad that it was only at the end that they realized the potential many of these figures held that can be unleashed with a little creativity.

When I first saw this figure, I knew what role he would play in my collection. I've long been a fan of Joe themed army builders. In fact, I probably have more Joes for the purposes of army building than I do Cobras. As such, I immediately saw Mirage as my new basic grunt trooper figure. I've been using the '00 Dusty as my primary Joe soldier for a while now. With the acquisition of Mirage, though, that figure will become a more elite trooper while this guy will be the rank and file infantryman. His look just says that he is a basic soldier. (I like my foot troops to be a little on the futuristic side.) He has the communications device molded to his head, a strip of grenades across his chest and the cool goggles. (Note, early production test figures came with green goggles. There are several loose, green goggled samples out there. However, all of the carded Mirages that were released to retail outlets came with clear goggles. While some may call this a variation, I consider the green goggles to be a prototype, pre-release item. As such, they are not something that I would seek out for completion's sake.) The fact that he comes with the same gun I've assigned to that Dusty figure just makes him a more perfect fit.   (On this note, there is some controversy surrounding the accessories that belong to Mirage, specifically. While the silver gun you see in the picture and the version of Big Ben's gun surely belong to him, the black backpack and knife are more ambiguous. Some say they belong to Mirage, others say they belong to the Viper. Some say that the pack is Mirage's while other say just the knife is. Without any way to tell for sure, judging a Mirage figure's completeness should be something that you define to the accessory level. Not every person will consider a Mirage complete with the same accessories. Personally, I give him the 2 guns and the knife. The pack is traditionally Cobra, so I've assigned it to the Viper.)

One thing of note about this figure is how visually striking he is. This figure features eight different colors on the mold. Even in the vintage run, you will be hard pressed to find very many figures that have that many different colors on the same mold. Most of the earlier repainted classic Joes suffered from the same color plights that plagued the '94's. They had decent schemes, but only three or four total colors on any given figure. Frankly, this does not allow for the full details of the mold to be explored and showcased. Giving a figure a more complex color scheme allows for the mold's details to really be accentuated. On Mirage, all of the figure's different layers have a different color scheme. His pants are black, with silver and brown highlights. However, before you reach the torso, he has a darker green belt that helps meld the two colors. The sharp green of his chest is kept in check by the muted brown trappings as well as the darker green bandolier that holds little canisters. If you follow up to his face, the figure is capped by locks of blonde hair.  The overall presentation creates a figure who is a remarkable remake of formerly under appreciated mold.

As time goes on, I see this figure remaining a large part of my collection. The early shots of the V3 Mirage repaint don't strike me the way this version did. As such, while the new version will have a place in my collection, it is this figure who will become the definitive Joe infantry army builder in my collection. As such, I don't mind having him packed with a Viper. Should I acquire multiple Vipers, the extra Mirages are well worth the extra cost to me. I like the Joe vs. Cobra concept and my stance on retail release army builder 2-packs is well documented. Frankly, I've seen these guys on the shelves several times and have not had any trouble acquiring them. (Of course, if you do, check out ToysRUs.com as they currently have them in stock.) Were the Mirage not part of the pack, I highly doubt that would be the case. Still, my only lament is that the ingenuity used to create this figure did not manifest itself earlier in the A Real American Hero Collection repaints from the past two years. Were more of those figures done in this style, I think many people would be calling that run a true Renaissance rather than just a re-release period.

This figure's availability is yet to be determined. The Wave 1.5 of which this figure is a part has only shipped to retail for about two months. Now that it appears that Wave 2 of the new sculpt Joes, that will include a repaint of Mirage, will not ship until September. While there are still 2 cases of repaint figures that have yet to really ship to retail, I think we will see Mirages through the summer. With that in mind, this figure will be very common. Of course, there is another factor to this. Mirage is packed with a repainted Cobra Viper. (My second favorite repaint of the mold. I'm not too partial to Vipers in general, but I really like the '02 version.) As such, there are MANY collectors out there who have acquired 20 or more of these figures. As they get Mirages with the Vipers, they are stuck with some surplus figures. While I have found a use for them, most other people won't see the value in dozens of Mirages and will liquidate them for very reasonable prices. As such, I don't ever see this figure being hard to find or very expensive. (Though I would imagine that the carded version with the Viper will probably rise in price on the secondary market. However, that will not be due to Mirage's presence in the pack.) If you would like a Mirage army, now, though, would be the time to act. Many collectors are looking to unload surplus Mirage and Big Ben figures. As both of these repaints are very well done and include some great accessories, you can get a couple of really nice figures for almost nothing. That's the type of thing that makes Joe fun. I'm now to the point where I really don't care for or need more than a few of every Cobra army builder. (Really, I rarely use more than 5 or 6 Cobras in any given scene. Besides the Cobra Count, you will be hard pressed to find more than a few examples throughout the site.) Being able to acquire superior repaints of obscure Joe figures from the later years of the line is something that I have found to bring a bit of the innocence back to Joe for me. While I can't say if this phenomena will repeat itself for you, I know that I've found this version of Mirage to be a most welcome addition to my collection. I think you will, too.

If you have some spare Mirage figures that you want to get rid of, let me know. I might be interested in acquiring them from you. However, I won't be offering very much for them as they are quite common. If you would like more information, email me. 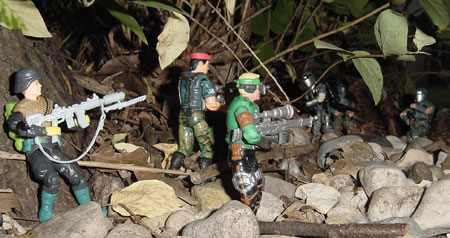 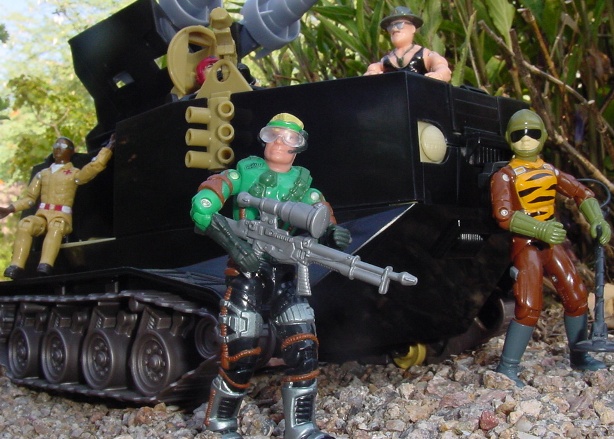 Posted by Robot_Sonic at 11:01 AM
Email ThisBlogThis!Share to TwitterShare to FacebookShare to Pinterest
Labels: 2002, Mega Marines, Mirage