I am sure that once the vast majority of people who visit this site saw that my most recent profile was of Clean-Sweep, a member of the hated Eco Warriors, they simply didn't click the link and decided to return in the next week or so when I return to sanity. However, for those of you who have ventured to this point, I'll just offer this warning: I like Eco Warriors. There. I said it. Now that that's out of the way, I also want it known that I'm not out to convince anyone else out there to like them. In fact, if you hate them even more when I'm done, that's fine, too. Basically, though, whether you hate the Eco Warriors or not, you have to admit that Clean-Sweep is the most obscure character relegated to it. As such, he is a perfect candidate for a Forgotten Figure profile.

When I first saw Clean-Sweep, one specialty raced into my mind: airport firefighter. His hooded suit just reminded me of the airport firefighters I used to see in my youth. As firefighters were an element that I often used as part of any airfield scene, I decided that Clean-Sweep would be a welcome addition to my collection. I went out in search of him and made it a top priority to track him down. In fact, if you look back in the Joe newsgroup you can find a post I made all the way back in 1998 when I first got this figure talking about how much I like him. (Notice the 60 figures with accessories for under $100 as well. Man, I miss the old days some times!) He was everything I had hoped his mold would be and Clean-Sweep became a firefighter/rescue trooper who was part of my airfield crash team.

Clean-Sweep does have one fatal flaw. (No, it's not the neon color!) He has the single worst head sculpt in the history of the Joe line. It is really too terrible for words. However, it is the hood that makes this figure. As that completely covers the head, you can forgive the poor design. Unfortunately, without the hood, the figure is just about useless. Given the opportunity to acquire a nice Clean-Sweep figure sans helmet for even $1, I know I would pass it by. The figure is just too lame without it. I've said it before and I'll say it again, sometimes an accessory does a figure make. Clean-Sweep's helmet is a prime example. With it, the figure is very cool, realistic and usable. Without it, he is probably one of the most useless figures in the history of the line.
One of the main reasons I stick up for the Eco Warriors is because so many people simply hate them. As a concept, they are pretty far removed from the classic definitions of what Joe is. I do, think, that the concept could have flown had it not been done in the way it was. Frankly, Airtight should have been the leader of this group and they should have focused less on environmental issues and more on things like Bio Terrorism, chemical warfare, or germ warfare. This was a hot topic in the early 90's and had the Eco Warriors been given issues like those to tackle, I think the subset would have much more respect from modern collectors.

Perhaps issues like these were too real at the time. However, having a group of heroes available to stop the horrors kids still heard about on the evening news might have been a good thing. Alas, we got what we got. The great thing about Joe, though, is that I'm not forced to make these guys' mission what the comics and filecards dictated it to be. In my world, the Eco Warriors are the guys who are stopping Cobra from spreading the SmallPox they stole from Russia in 1994. (There was a front page Wall Street Journal article on the lax security at the Russian lab where the SmallPox virus was held back in late 1993/early 1994. I used that as one of the early plots involving my newly established Cobra characters.) These are the guys who are preventing Cobra from launching an attack on the U.S. from the inside. In today's world, issues like this are even more poignant. I'm not saying I'd like to see the Eco Warriors return in the new Joe line, but a new Airtight figure with updated CBR gear might be something to consider as the line matures a bit.

Clean-Sweep's role in my collection has really remained unchanged since I first got him. He is still an airfield firefighter and rescue trooper. (I use him as a faceless minion rather than a full blown Joe.) As I've acquired larger aircraft for my Joes, Clean-Sweep has become an integral part of their support team. Should the day ever come where I own a U.S.S. Flagg, you can be sure that a small contingent of Clean Sweep figures will be on deck at all times to support damaged aircraft. Beyond that, though, I've found the figure limited. While I do use him as part of my bio-terrorism unit, he doesn't get as much use there as do some of my Star Brigade figures. This is definitely a niche figure and not one that has a great deal of versatility. For what he is, though, Clean-Sweep is a decent enough figure.

Clean-Sweeps are pretty tough to find if you want them loose, mint, and complete. However, they, like most of the Eco Warriors figures, can easily be found carded. Either way, the figure is going to be cheap. People hate the Eco Warriors and the figures are valued as such. I'd be surprised if you spent any amount of time looking for this figure and couldn't find an at least nearly complete one for under $5. That's bargain basement as far as Joe figures go. Personally, though, this is another figure who, for the price, is a great addition to your collection. He has a mold that lends him to only very specialized areas. As you probably don't want to spend a lot on a figure you will only use once or twice per year, Clean-Sweep is perfect. I've found this guy to be a valuable part of my collection and a figure that I actually keep out on display, from time to time. He is easily the class of the 1991 Eco Warrior Joes and is a figure that I think every collector should at least consider for their collection on some level.

While I'm covered on the Joe 1991 Eco Warriors, I could use a mint, complete with filecard 1992 Deep Six. I am also after a mint, complete Corrosao (Eco Warriors Dee Jay) from Brazil. If you have either one of those figures that you are willing to trade,email me. 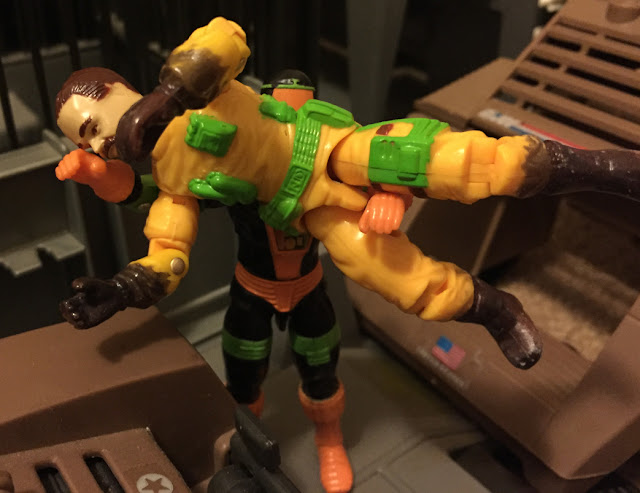 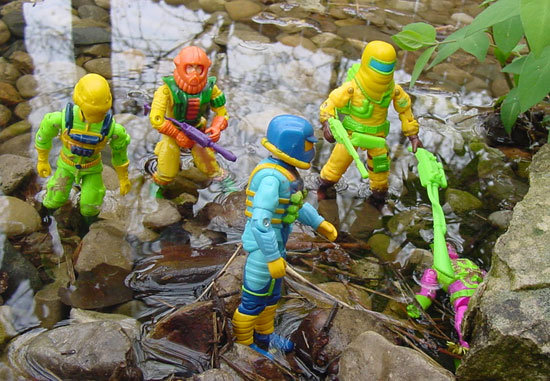 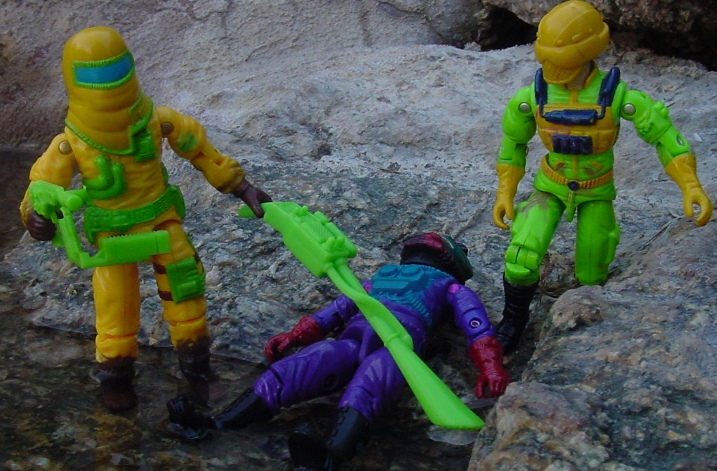 Posted by Robot_Sonic at 9:03 AM
Email ThisBlogThis!Share to TwitterShare to FacebookShare to Pinterest
Labels: 1991, Clean Sweep, Eco Warriors