This site has long specialized in the very obscure figures that dot the Joe collecting landscape. Over the years, though, the pool from which to draw Forgotten Figures has gotten smaller and smaller. Every now and then, though, I come across a figure that I had forgotten about and who you don't often see in any online Joe collecting forums. Usually, these figures come from the latter part of the original Joe line and are obscure primarily because of their late release date. In this case, though, Skystriker is a bit odd. He was released in 1988 as part of one of the most popular subsets ever concocted for the Joe line. However, for whatever reasons, this figure has fallen by the wayside and now remains the least publicized member of Tiger Force.

Skystiker is the only original character who was originally a member of Tiger Force. (This was almost not the case, though, as a character named Sabretooth was originally intended to be a member of the set. Sabretooth was a straight repaint of the '84 Firefly mold, but was never released. Now, though, a figure will be released in the same paint scheme as was intended for Sabretooth as an homage to that character in the upcoming TRU exclusive Tiger Force set.) He is an amalgamated figure utilizing the body from the original Wild Weasel and the head from Thunder. He even has a recolored version of Thunder's headgear to more specifically match him with his earlier counterparts. His body choice is odd, as he was the first (and one of the only) Joes to utilize a body mold that originally belonged to a Cobra. However, as he was the pilot to the Tiger Force Rattler repaint, the utilization of Wild Weasel's body insured greater compatibility with the plane and lessened the overall feel of this being a retail release amalgamation.

The use of Skystriker really kind of baffles me. There were many great pilot molds released as figures in the Joe line. In 1988, there were many other characters, most notably Ace, who would have been a better fit for as this pilot. The creation of an obscure character that was never explored in any Joe media was really an unnecessary step. It seems that this character was created just as filler to include with a cool vehicle beyond anything else. Of course, this has only enhanced his obscurity and has left Skystriker as a character that really does not fit into any type of Joe hierarchy.

I've always kind of liked the Tiger Force figures. Many of them are nice repaints of an original figure that allow for some diversity of character. Others are just visually striking and offer the type of aesthetic difference that lends a sense of uniqueness to a diorama. Many of you know that there is a new Tiger Force coming out later this year. Personally, I can't wait for it. I think the idea of a small subset of figures that are all done in one color scheme is kind of fun. The fact that many of the upcoming figures are based on the hard to find European exclusive figures and will provide an affordable way for many collectors to experience the look of the Euro figs in their collections. With the announcement that these theme sets could become a trend, I'm looking forward to seeing some additional repaints of classic molds come our way.

As far as Skystriker goes, he usually sits in my 1988 Joe drawer. Beyond his acquisition a couple of years ago, I've never really used the figure for anything else. In fact, it was only when I was cataloging my 1988's that I kind of rediscovered him. I took him out for the photos you see below and then tucked him back into his poly-bag and stuck him back in the drawer with the other 1988 figures of which I still need a part or two for completion. Beyond that, I don't have a use for him. Just about every other pilot figure that was ever release is superior to Skystriker. With that in mind, I don't foresee this guy ever being a major player in my collection. There are just too many other figures I'd rather have before this guy even appears on the radar screen. His obscurity causes me to forget he's available, but the poor color and mold choice causes me to pass him over when I'm choosing figures for a specific purpose. Perhaps, in time, I will use him as a test pilot or filler on the Flagg (should I ever get one!). Until then, he remains one of the least often seen figures.

As regular release American figures go, Skystriker is among the tougher ones to find if you want him mint and complete. While not as scarce as Hardtop or Payload, he can still be problematic for those seeking him. Skystriker suffers from original accessories that were never available with any other figure, paint that easily rubs off, and a lower production run as the pilot of the most expensive and least produced vehicle from a subset that was, in itself, under produced. Of course, just because he's hard to find does not make this guy overly expensive. Most people don't care about the figure and only want him to either complete their figure collections or complete their Tiger Force Rattler. Either way, this small group of people is not enough to put Skystriker in high demand. When you do find a decent one, he can be had under $12-$15 with no problem. For that price, I would pass on him. As a figure, he is interesting, but not so much so that I would consider him a necessity. There are tons of better pilot figures in the Joe line. Skystriker is just another, non-descript member of their group.

While I've got the Skystriker figure, I do need his filecard. If you can help,email me. 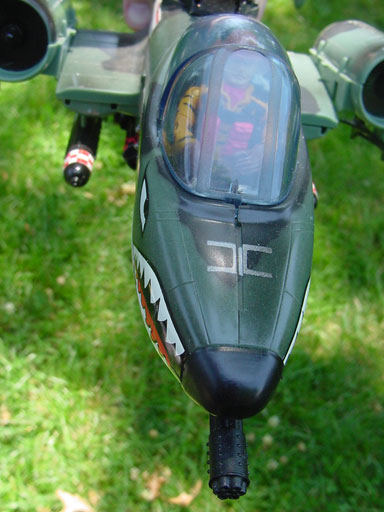 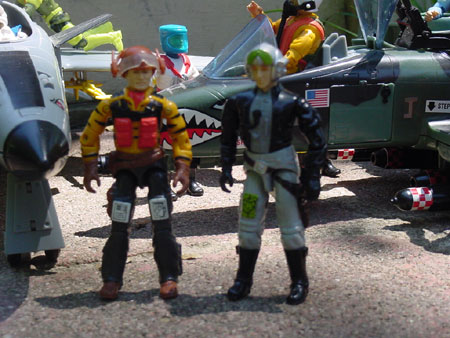 Posted by Robot_Sonic at 11:04 AM
Email ThisBlogThis!Share to TwitterShare to FacebookShare to Pinterest
Labels: 1988, Skystriker, Tiger Force, Vehicle Drivers