When G.I. Joe debuted, the retail landscape was vastly different from what we know today.  Regional retailers held large sway and local toy shops were still a large part of the sales model.  Pretty much any retail store that was not a specialist would sell toys near the holiday season.  And, giant catalog retailers like JC Penny's and Sears were juggernauts able to negotiate exclusive products from toy manufacturers.  In the Joe line, Sears was a preferred retail partner of Hasbro through 1986.  Penny's didn't wield Sears' buying prowess.  But, it was able to hold its own and obtained some exclusive items that were offered in its catalog.  The most famous of these is the Cobra Figure 3 Pack from 1982.

The Cobra Trooper and Cobra Officer were late additions to the Joe line.  They were not among the initial releases of figures and appeared in later months as the brand gained a foothold.  They were early enough to be released with straight arms: but, late enough that they featured the improved, thinner crotch piece that was less prone to breakage.  JC Penny's had the idea to package two Cobra Troopers and one Cobra Officer into a three figure pack that was then equivalent to the 3 different 3 packs of Joes they offered as well.

The real change to this figure three pack was the accessories.  The Cobra Officer included his standard AK-47 rifle.  But, he was also given a version of Short Fuse's mortar.  While the catalog pictured the earlier, full handled mortar, the actual figure came with the half handled mortar that was being used at the time.  The Cobra Troopers, though, did not include their original gear.  Instead of the Dragonuv sniper that define the character, the two figures included Zap's bazooka.  This wouldn't be great as '82 Zap bazookas are fragile and tend to break.  However, Hasbro did future collectors one better by making both the bazookas an exclusive color or an exclusive production stamp.  This now helps differentiate these figures from someone trying to boost the price of a Cobra with a leftover Zap bazooka.  But, it also makes finding a complete version of these figures nearly impossible.

The other change to the set was the filecards.  The Cobra Trooper now denotes that is an expert with a mortar and a bazooka in order to match up with the included accessories. 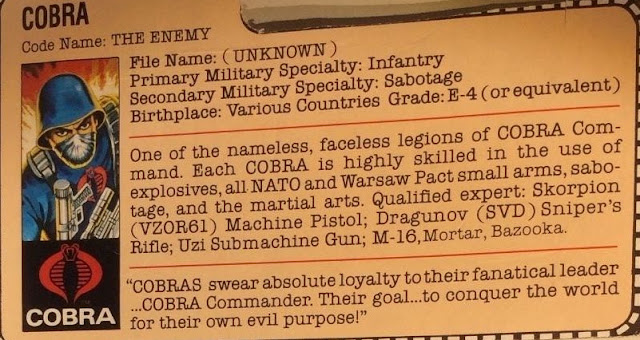 Identifying the bazookas is troublesome.  But, it can be done.  The 1997 Zap bazooka is a close color match for the Penny's darker green bazooka.  But, they are not the same and can be easily identified.  The Penny's bazooka has an A 1 on the handle.

The second Cobra Trooper includes a bazooka that is nearly identical to Zap's in terms of coloring.  However, there is still a difference.  Zap's light green bazooka has a B 2 on the handle.  The correct bazooka from the Penny's pack has a B 1 on the handle.  Finding this variant is just as frustrating as the dark green bazooka.  But, it's a small, important detail to ensure all the parts are correct to the set.  (It should be noted that the Zap figure that was available from JC Penney in the same catalog also could include either a B 2 or a B 1 bazooka.  So, the B 1 is an Penney's exclusive, but could have come from two separate figures.)

These figures are pricey.  A complete Cobra Trooper with the correct, variant bazooka will fetch upwards of $150.  Since the Officer lacks an exclusive weapon, it's rare to see a price increase on him unless he includes the filecard.  On their own, though, the filecards can be equally expensive.  Sets of three will sell around $50 - $60 each.  Again, though, as the Cobra Trooper's card features exclusive text, you will see it get a slight premium on the officer card.  But, the unique outline of the exclusive bubble that denotes it as Penny's Officer helps keep in the same ballpark.  Intact bubble samples are very rare and are among the most expensive exclusives out there.  Even 15 years ago, they were a $1,000 item.  Today, they remain a four digit purchase.

For me, the expense is extreme.  But, being released in my childhood wheelhouse for Joe also makes them somewhat desirable to me.  While I don't really want to pay $150 for, essentially, a slight color variant bazooka, I can see myself doing it at some point just because it's another piece of the early line that caused me to continue collecting these toys for 35+ years. 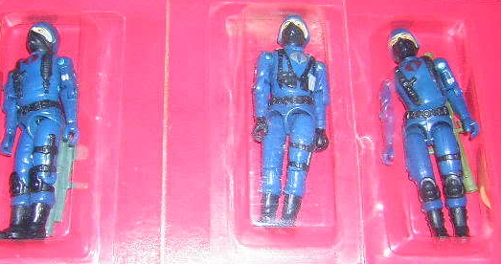 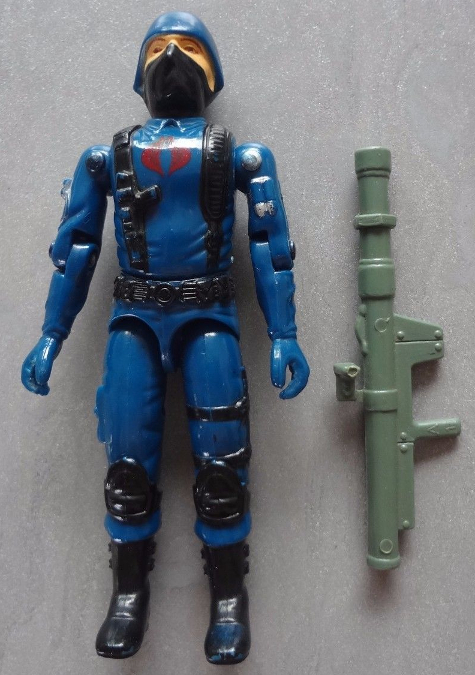