Back in 1988, I was pretty much out of Joes. I picked up three figures and figured my Joe collecting days were done. My younger brothers, though, continued to acquire new Joes, though not with the same fervor that I had employed. Over the course of the year, they managed to acquire about half of the available Joes. Some of the figures did very little for me. However, others, were excellently done. The Iron Grenadier, Repeater and Shockwave became some of my favorite figures that I didn't, technically, own. Some other figures, though, had their situational nature work against them during that summer. However, when winter rolled around, I discovered one of my youngest brother's figures that was about the best arctic trooper I had ever seen: Blizzard.

The main thing that made Blizzard so cool was (and still is) his accessories. He was topped with a mediocre helmet that didn't work all that great, but his pack was truly one of the most innovative concepts of it's time. Blizzard included both skis and snow shoes. It was possible to attach both of these accessories on his pack at the same time. With the skis in place, the pack could be used as a miniature snowmobile as it was equipped with handlebars complete with hand brakes. This little piece combined great styling and detail with an incredible amount of fun. It gave this figure a usability beyond even that of the original Snow Job figure. The figure was then filled out by two excellent weapons: a white uzi that featured molded cloth wrappings to keep it from freezing and a small white pistol. Both of these weapons were well done and perfectly fit the figure. The overall complement of accessories was among the best released that year ('88 saw a nice run of well accessorized figures) and remains the pinnacle or arctic mission gear.

The concept of arctic army builders entered in my Joe world early in my childhood. As 1983 was a big year for Joe toys in my house, both I and my brother ended up with Snow Job figures. Some time that winter, I remember seeing some terrible made for TV movie where some American soldiers, dressed nearly identical to Snow Job, were killed by some enemy force. Seeing this, though, forever turned Snow Job into a nameless army builder in my Joe world. From here, things progressed. In 1985, Frostbite became the leader of the arctic Joes. In 1986, he was joined by Iceberg and from the Snowcat, they commanded a legion of snow soldiers who supported the Joes. To this day, Snow Job remains an army builder. However, as the line progressed and arctic Cobras became more sophisticated, I needed a new level of arctic soldier who was more skilled and better equipped than the tired old Snow Job figures. In this role, Blizzard fit fantastically.

The Blizzard mold has had an interesting life. After his release in 1988, Blizzard made his way to both Europe and Brazil. Some time around 1990 or 1991, Blizzard was released in Europe in an exclusive Tiger Force color scheme. While I don't normally consider yellow and orange to be typical arctic colors, the figure is still very well done and very aesthetically pleasing. From there, this mold made its way to Brazil. Around 1992, Blizzard was released down there as a new character named Nevasca. However, like the '93 Beach Head mold, Nevasca was now a Cobra! I am not familiar with the figure itself, but I don't think it had any modifications made to it that would denote the figure's change in affiliation, but seeing Blizzard alongside the Hydro Viper, Raptor, the Crimson Guard Immortal and the '91 Cobra Commander is rather interesting. Unlike the other molds in this series of Brazilian Cobras, though, it does not appear that Blizzard was sent to India. In 1995, Blizzard's body was used for the Arctic Assault Guile from the line of Street Fighter, the Movie figures. This body is painted similarly to the original Blizzard but is something a little different that you may come across in your collecting travels. To top this off, Blizzard was to be included in the 1997 Arctic Mission Team with Snow Job and Iceberg. In fact, the cart art depicts Blizzard as one of the members. However, Hasbro could not locate the tooling for Blizzard and went with the '93 Frostbite mold instead. (Missing tooling was a common problem in 1997. Cobra Commander and Destro were originally intended to be their V1 molds while Snake Eyes was planned as the V2 mold. However, these could not be located so we got the figures many have come to loathe instead.) This was unfortunate as a new interpretation of Blizzard (along with his original accessories) would have been a great asset to the line.

In my collection, Blizzard remains an army builder. He is the step between the basic grunts portrayed by Snow Job and the hard-core, highly trained soldiers portrayed by the '93 Frostbite figure. He is more of a middle ground. His accessories allow him to be more self sustaining than Snow Job's, but not too the point where they would force him into an "elite" status. In this role, this figure has flourished. While he does not see use throughout the year, he is always among the first figures to come out of hibernation every winter. In the snow and cold, this figure works great. His accessories make him playable without sacrificing any detail. That's the way I like some figures to be. Joe is about diversity. Blizzard is one of the many figures who, while not a major character or oft-discussed mold, remains a vital part of the Joe world. He is the supporting character who fleshes out the line and keeps it so fresh even 20 years after the concept's original launch.

Blizzard figures are very easy to find. However, getting one that is not discolored and complete is a bit harder. As such, mint complete Blizzards can fetch upwards of $12 or so. For this price, the fig isn't too bad. However, even missing one accessory (like a handle on his pack) Blizzard's selling price drops off quickly. In fact, it is economical to army build Blizzard figures who have just the helmet and gun. For a short while, this was something I enjoyed. However, after about 6 of them, the novelty wore off and I kept my Blizzard army at that modest sum. However, he still remains one of my mainstays on arctic missions. While Snow Job and Frostbite get all the press, Blizzard is the definition of forgotten. I don't foresee him ever gaining any great amount of collector interest, but that allows those who have yet to acquire him to still do so reasonably. As more and more new collectors discover the Joe line, figures with these qualities will become fewer and further between. As long there remain a few, though, I think that Joe will stay an accessible collectible line well into the future.

I'm well set for Blizzard figures. However, I am in need of a European exclusive Tiger Force Blizzard. If you have one of those for trade, I might be inclined to part with a carded Cobra Infantry Team. If this intrigues you, please let me know. 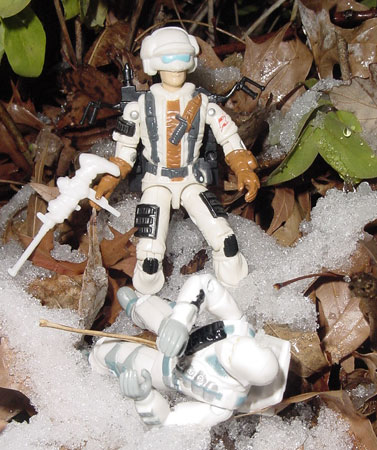 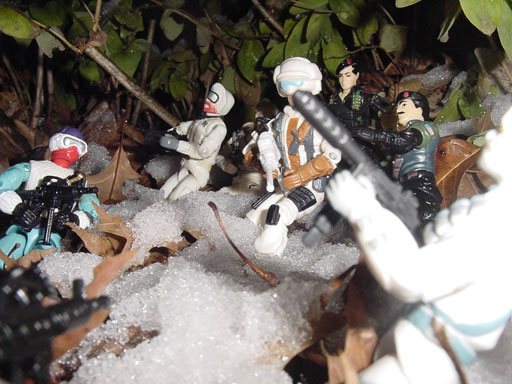 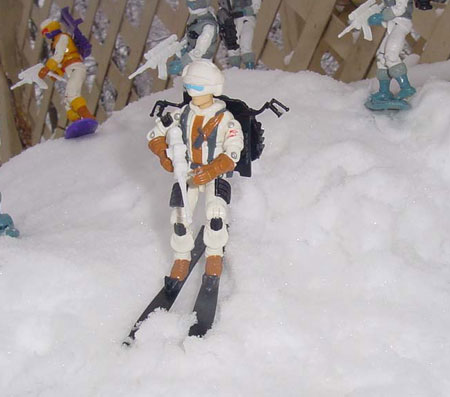 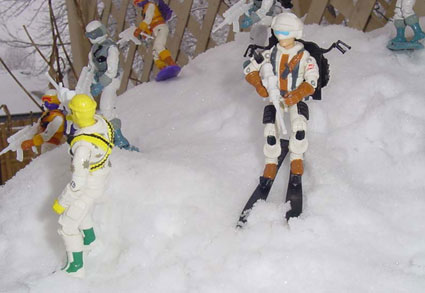 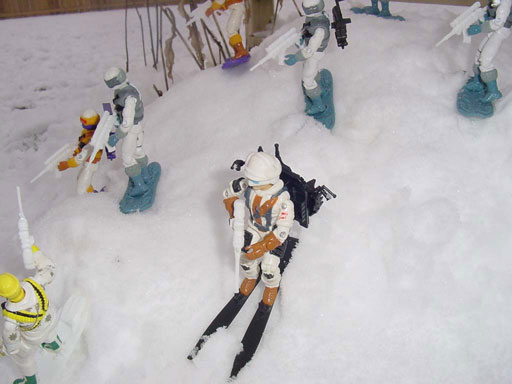 Posted by Robot_Sonic at 10:56 AM
Email ThisBlogThis!Share to TwitterShare to FacebookShare to Pinterest
Labels: 1988, Blizzard