Any of you who are familiar with this site know that my stance on BATs is quite contrary to most other collectors. As such, I would venture to say that many readers are gearing up for another of my negative articles regarding BATs, their very concept, or the toy execution of such. However, I found myself quite surprised earlier this year when I opened my Wave 4 BAT figure. While I had first thought the Shipwreck figure to be the highlight of this pack, I was quite disappointed in that figure. However, the BAT (that I had intended to simply go into the back of the drawer like all his other versions) figure actually grabbed my attention. For many reasons, the figure just worked better in this incarnation than it had in any of the vintage versions. While this is a great departure from my normal stance on these figures, I've found that even my new found like for this new figure has not warmed my opinion of his ancestors. Regardless, I hope you enjoy reading my thoughts on the figure.

As a sculpt, this figure works perfectly. Past BATs have failed (In my opinion) due to their sculpts making the too human like. (That's why I continue to use the '91 version as a human pilot.) This figure, though, is definitely a robot. First off, the figure is sculpted taller than the humans in the line. As such, in terms of proportionality, this BAT would be about 7 feet tall. From a realism perspective, I like this better. The exaggerated proportions allow for the character to be more believable and fit in with what robotics of this sort would actually look like. On top of that, the body does not retain human dimensions. The figure has long legs, an elongated torso and a sleek, small head. Again, this makes the figure look like a the robot it is supposed to be. The thin, electronics covered arms finish off the sculpt in a way that makes this figure more real to me.

My favorite part of this figure is his accessories. I know most people are long time fans of the removable BAT attachments. I, however, am not. I always preferred to use the hands on my BATs and give them real guns. The concept of a Laser or Flamethrower attachment never really did much for me. This BAT simply has two human-like hands. He comes with a small, newly sculpted rifle that meshes with him perfectly. I see the gun as more wieldy that a heavier weapon and more manageable for a robot with limited dexterity. Tucked behind his large elbow joints, the gun just seems balanced. For an automaton, these features would be indispensable. On top of that, the figure comes with a black version of Torch's backpack. One of the gripes I had with the old BATs was their power source. Batteries, while rechargeable, would be heavy and have limitations. A fuel powered robot, though, would have multiple uses. (I know this runs counter to the filecard, but I've never been one to be limited by established Joe continuity.) First off, the fuel tank would provide a more measurable operation time for BAT units. That would be imperative to Cobra battlefield commanders as they would be able to time when BATs would simply run out of gas. Next, the exposed gas cannisters make BATs perfect walking bombs. One feature of the BAT that I've utilized since 1986 is the fact that they burst into flame when hit from behind. As BATs have this tendency, Cobra would always be behind them. With the fuel tank on the BATs back, the trailing Cobra Troopers would be able to simply blow the BATs up by shooting the fuel tanks. This would make the BATs work as both infantry cannon fodder as well as poor man's sappers. The duality of purpose makes the BATs more valuable to Cobra field soldiers as well as more dangerous to any potential foes.

This BAT has another hidden little feature that you can see below. Rather than resurrect the oft lost chest holograms from BATs past, Hasbro instead gave collectors a little Easter Egg on this BAT. His chest plate is removable and hides the BAT's inner workings inside. It is a neat little feature (and a piece that will be oft lost on those BATs that now below to children) and shows that a great deal of thought was put into this figure. It is this level of detail that keeps the new sculpt figures very interesting. I liken the new sculpt figures to the POTFII line. The characters are similar, the designs are familiar, but the figures have a more modern feel to them that is more amenable to display. Wave 5 appears to continue this trend. As long as there are details that allow these new figures to separate themselves from other retail lines, I think that the line will create quite a legacy for itself.

BATs are still relatively available for retail prices. Beyond that, there are rumours that we will see another BAT in an upcoming figure wave. (My guess is that it will be a slight repaint of this version with new arms and, possibly, removable attachments.) If that still doesn't solve your BAT needs, there is the upcoming BAT Army Building Pack that will include 6 figures and sell for all of $15. All that should help sate some of the demand for BATs that seems to have been building for several years. In the meantime, I enjoy this figure for what it is. Atop my shelf, standing behind the new sculpt Dr. Mindbender, this figure looks regal. I think this is why I like the new sculpts. For display, they work great. For use, though, I'm still a classic mold enthusiast. Regardless of your figure construction preference, though, this BAT is nicely done. In that regard, I'm glad I was decided to acquire one when I did. Surprisingly, it is a not a choice I regret. If you've been putting off the acquisition of this figure, I don't think you will regret his purchase, either.

I'm well set for BATs. However, I could use one of the variant accessories. If you have one you would be willing to part with, let me know. 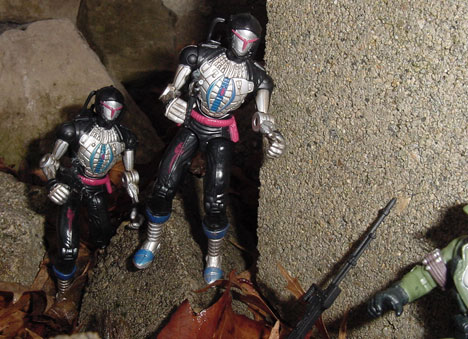 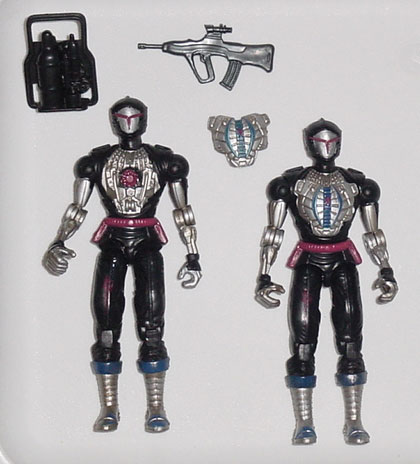 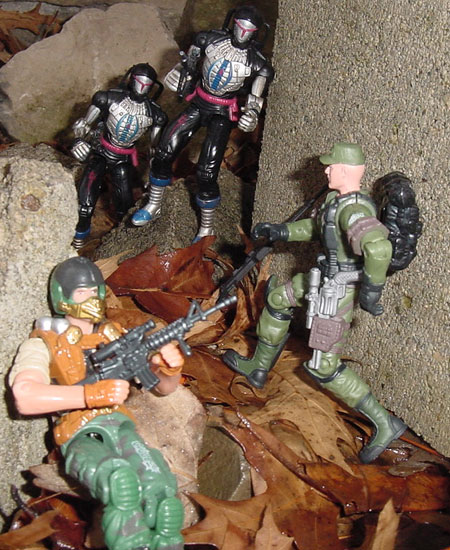