The 1997 G.I. Joe line is probably the most flawed year of toys Hasbro ever produced. From the get-go, there were problems with finding molds, determining a character lineup and making quality products. As such, collectors mostly met the '97's with a universal groan that has still not dissipated to this day. While some of the hatred over the toys produced this year has subsided, most people still have a sour taste in their mouths over the whole fiasco. However, if you can get past the many problems that afflict many of the '97 toys, there are a few gems hidden in there. Figures like Stalker, Snake Eyes and the Viper are all very well done. For the most part, the '97 vehicles were as well. Sure, the quality wasn't always top notch, but the deco was. While I've already profiled the driver of what I consider to be the best '97 vehicle, I felt that now was the time to actually showcase what has become my second favorite Cobra ground vehicle: the 1997 Cobra Rage.

At first glance, the Rage seems like kind of a silly vehicle. It is short, fat and full of accouterments that seem like overkill. However, once you fully examine the Rage, you realize that it is actually a very well detailed and fun vehicle to own. First off, it's armed to the teeth. Aside from the double-barreled main turret gun, the Rage features an anti-infantry Gatling cannon on the vehicle's nose, 2 swivel Gatling cannons that are located underneath the main turret, 4 rockets, a side mounted flak cannon or some sort and landmines that are dropped from a compartment on the vehicle's rear. All of this leaves you with a combat weapon that is armed in every direction. Even if you discount all of the vehicle's weaponry, it is also useful for carrying troops around. 2 figures fit into the protected cockpit. One sits in the exposed gun turret. (I don't know why, but just about every Cobra vehicle has an exposed gunner. Maybe it's just to show how tough Cobras are. Or it could be that it just makes the vehicle more playable. But, the exposed gunner is a hallmark of Cobra mechanized weaponry.) You can then put at least 5 more figures on the side and rear foot rails. This makes the Rage more useful as it can be utilized for both combat and logistics.

To me, the HISS Tank remains the consummate Cobra vehicle. While Stingers and STUNs have their place, I've always found the HISS to be the most useful and fun to use toy. While the Rage is not going to displace the HISS Tank, it has helped flesh out my ranks of Cobra armour. The heavy weaponry and great mobility have left the Rage as my second most used Cobra vehicle. This version has the right colors to mix well and look like a part of the Cobra army. As such, whenever more than 1 HISS Tank is pulled out, the Rage also follows. It is the ideal companion to the heavier armour but lacks some of the whimsical features that are seen on other Cobra vehicles. It adds some depth to any Cobra armour display and, as you don't see this version of the Rage so often, allows for something a little out of the ordinary in dioramas.

This version of the Rage is now kind of hard to find. The '97 Joes saw a lower production run than much of the current stuff and have become relatively scarce on the second hand collector's market. What's amazing, though, is that back in '97 and '98, Rages were really pegwarmers. Due to the fact that army building was not as vogue as it is now, just having "Cobra" on the box was not enough to make something a good seller. The prevailing sentiment of the time was that the Rage was too obscure a vehicle for collectors to really get excited over. Plus, it was pricey. The retail price on the Rage was $19.99. For comparison, you could get the Rattler with 2 figures for $24.99. Plus, at that time, you could still pick up mint, complete HISS Tanks and other, better known Cobra vehicles on the second hand market for well under $10 each. All of this resulted in Rages sitting around. In fact, many people resorted to outright theft where they simply tore the Alley Viper out of the box so they could have the figure without having to pay for the entire vehicle. As such, the 1998 assortment of Joes featured better priced vehicles so that the errors of the Rage were not repeated.

This, though, has left the modern collector in kind of a lurch as finding '97 Rages is time consuming and expensive. MIB, '97 Rages can go as high as $90. (Though you can get them cheaper.) It's the finding that is the real problem, though. I'm glad I managed to get mine right as '97's were starting to dry up. Were it not for that, I wouldn't have one today. As I've started to exhaust my interest in HISS tanks, this Rage has been a nice addition to my Cobra army. Now, I wouldn't want to be without this vehicle. Should the chance arise for you to add this Rage to your collection, I certainly wouldn't pass it up.


I'm well set for Rages. What was your favorite vehicle of the '97-'01 repaint line? Let me know. 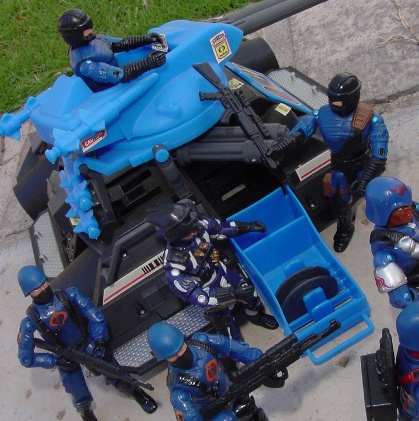 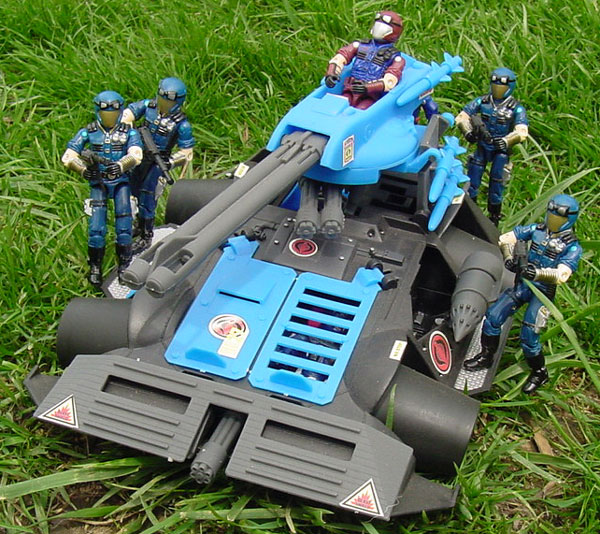 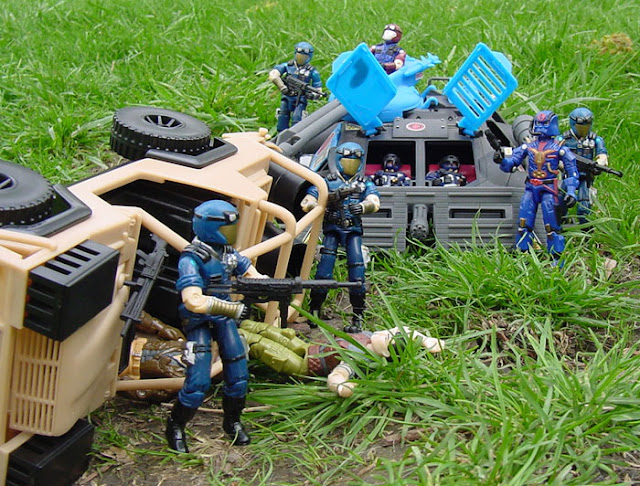 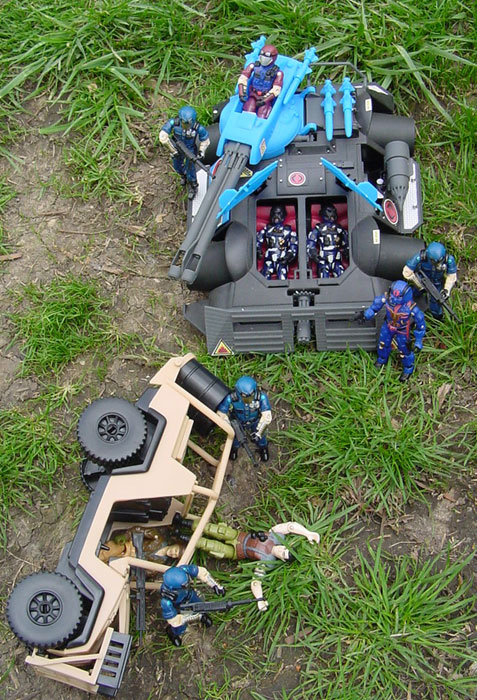 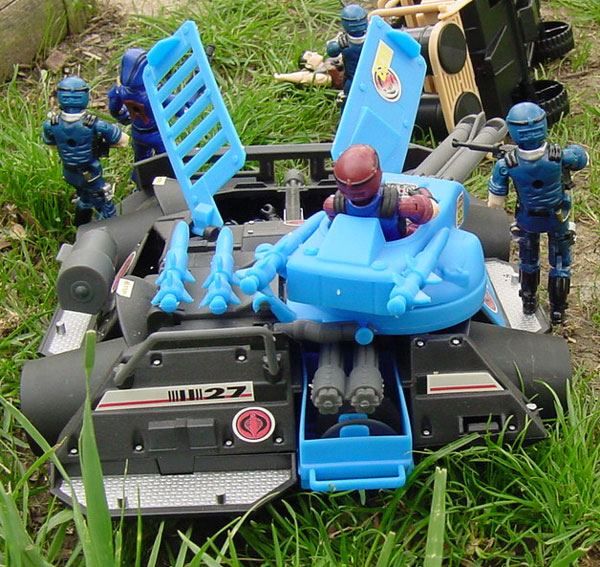 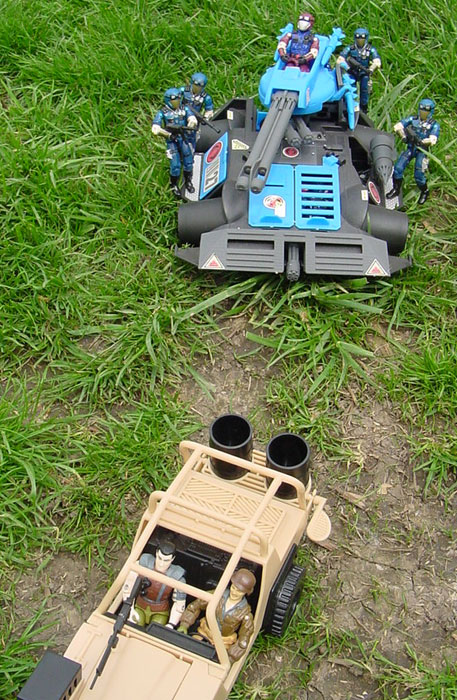 Posted by Robot_Sonic at 8:46 AM
Email ThisBlogThis!Share to TwitterShare to FacebookShare to Pinterest
Labels: 1997, Rage, Retailer Exclusive, Vehicles