In early 1986, one of my younger brother's classmates brought a bag of new G.I. Joe figures to school. He had found them at the local Target. For most of my friends and I, 1985 had been a long Joe year. While the figures were top notch, we had known about most of them since the fall of 1984 when many appeared in the cartoon. Those that we didn't know about that early were discovered in early December of 1984 when the Dreadnoks were released with card art that depicted all of the upcoming '85 figures on the back. As such, by the time '86 rolled around, I was starving for some new Joe figures. The 1986 offerings did not disappoint. I was immediately enthralled by the new colors on many of the figures. They weren't neon or anything like that, but they were refreshing in the sense that they offered some colors that had not been seen in the two prior years. The one figure in that bag of goodies that most intrigued me that cold February day was Dial Tone.

Dial Tone became one of my favorite figure molds from the instant I first saw him. There was something about his look that just captured my attention. His mold was full of the type of detail that you would expect from a communications trooper. He was covered in silver highlights that just made him seem more technical. His colors were somewhat bright, but not the point of making the figure useless. But, it was his accessories that really stood out. His gun was just a compact cross between a rifle and a pistol, but it remains one of my favorite weapons ever released. His pack had nice detail that made it look like a powerful field radio. It was the mouthpiece, though, that was the truly unique element to the figure, thought. While it was not the compact microphone we had seen in 1985 on Heavy Metal, it allowed Dial Tone to be the communications expert he was intended without forcing the accessory onto the mold. As such, the figure retailed value even when the pack was missing.

It remains my opinion that this is the best version of Dial Tone ever released. This figure retains the color that personified the original figure, but does it in a more realistic way. This figure looks like the combat field communications trooper that Dial Tone was always meant to be. He has the dark colors that collectors like, but wasn't bogged down in the too realistic colors that trapped many of his contemporary in blandness. This version isn't perfect, of course, as many of the details on Dial Tone's lower body were left unpainted. This is almost made up for by the fact that many of the details on his upper body, though, are actually painted on this version where they had been left all black on the original. The fact that this mold appears so late in the line, though, is the amazing part. This version is lacking in accessories that are apropos to the character, but his weapon complement is the best of the figures with which he was included. The silver Leatherneck rifle and large pack can fit with the figure. The web gear works on this version, but hides too much of the mold's color for my tastes. As such, I remove the web gear and give it to the more bland '00 Dial Tone figures to give them more life.

In my collection, Dial Tone has almost always been an army builder. I have used his figures as various nameless officers and security personnel for years. When I was a kid, I had 2 Dial Tones. They quickly became a security patrol who was in charge of prisoners: Cobra and Joe. That role has followed the figure into the current day. Now, my dozens of Dial Tone figures are various forms of security captains who are responsible for the large Cobra prisons that the Joes oversee. Every now and then, though, I do use the figure in his intended capacity. I give Dial Tone his original accessories and use him as a field communications officer as he was intended. These times are rare, though, as I don't get the use out of the figure in that capacity that I do when he is used as the security troopers. Since I like the mold so much, I use it in the way that affords me the most usage.

Dial Tone has always been a Hasbro produced figure. He was not sent off to India or Brazil. The mold was originally used in 1986-1987 on both the original and the Mission to Brazil figure and was then repainted in 1990 as part of the Sonic Fighters line. In 1994 or so, Dial Tone was released in Chinese packaging. It is unknown if these were a new production of the original colors or just overstock. After that, Dial Tone's life gets a little interesting. In 1998, Dial Tone was supposed to be included with the cancelled TRU exclusive G.I. Joe Headquarters. This never came to be, but a few Dial Tone's in desert "chocolate chip" cammo were produced and have made their way into the collecting market. These figures are actually probably rarer than the fabled Pimp Daddy Destro from 1997. But, since the lack of catch name, are pretty much under the collecting radar. The figure is interesting, but rather busy and something that I wouldn't really want to see released at retail. After that, the figure was repainted in 2000 and this version appeared in 2002 and then again in 2003. In 2001, the body was used for the Night Rhino Dusty figure and Dial Tone also appeared in the 2003 Tiger Force set. At this point, I think collectors are sick of Dial Tone and don't ever want to see him again. I can't really argue that point as I've gotten my fill of the mold. I do think, though, that at some point in 2006 (if the Joe line is able to survive that long) Dial Tone could make another appearance as long as he was part of a set that offered him in colors we have yet to see. That could work for me, as long as he was something different from the 4 released and one unreleased version.

The BJ's gift set has never really enamored collectors. Initial reports lead many to believe that it would be quite scarce, maybe even rare. However, within a few short months, the set was clearanced for less than 1/2 it's original retail price. In fact, you can still find many dealers today who would gladly part with their overstock sets for barely over cost, just to get rid of them. The set was bulky in the box and was difficult to ship. Unfortunately, for many collectors, this was an unavoidable problem. The set was simply not available to retail outlets in many parts of the country. This started the set off on the wrong foot with many collectors. The bad figures didn't help it from there. Of the 8 figures, Roadblock and Firefly are just terrible. Snake Eyes is OK, but nothing interestingly different enough from his other releases to make him worth getting. Undertow and the Fast Blast Viper are good army builders, but their red color makes them less useful in multiples. Stormshadow is a good figure and was the best red ninja available until 2004. Now, though, he is the third best choice for an army building ninja since better alternatives have been available at retail.

The two remaining figures: Wet Suit and Dial Tone are actually very good figures. However, they, and the rest of the figures in the set, suffer from the absolute worst complement of accessories ever offered in a Joe set. The accessories don't match the figures at all and were the original cheap alternative for Hasbro. The divers don't even have flippers! This is enough to sink the set and has kept all 8 of the figures very affordable. Dial Tone, though, is among the cheapest. Mint and complete, he will rarely run you over $4. This figure was also re-released in 2003 as the AWE Striker driver. This retail dud was heavily clearanced in 2004 and only further cemented this figure's reputation as a loser.

It is a perception that is not deserved, though. This version of Dial Tone is one of the best Joe figures released since 1997. He has realistic, yet not overused, colors, decent accessories (even if they are not perfect) and is true to the roots of the character. He suffers from his plight mainly due to the fact that collectors are simply not interested in Joe repaints. Plus, this version came out too quickly on the heels of the 2000 version. Finally, he was part of a set that many collectors army built anyways just because there was no other ARAH style product on the shelves. This lead to an oversupply of the figure and has doomed him to a life of obscurity, even though he is of very high quality. The good part of this, though, is that you can now get him rather easily for pretty much nothing. It's hard to find a figure about whom that is true, especially when he is of Dial Tone's quality. I doubt this will ever be a figure that is popular among collectors, but Dial Tone is one that is worth a second look. 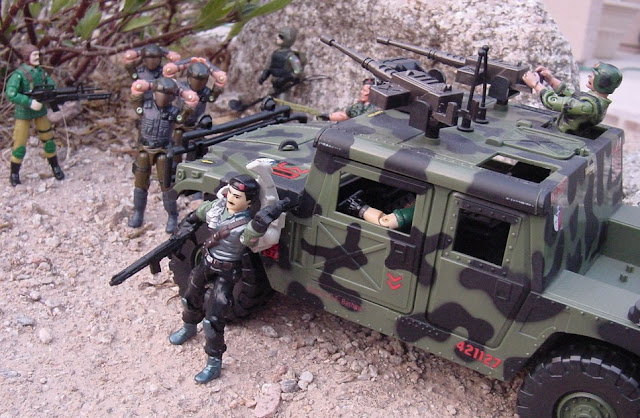 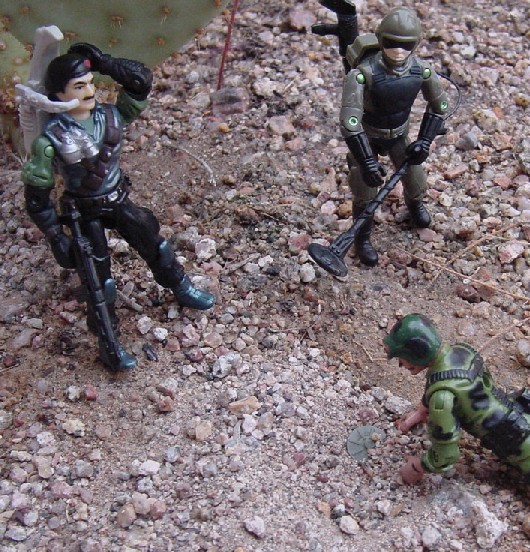 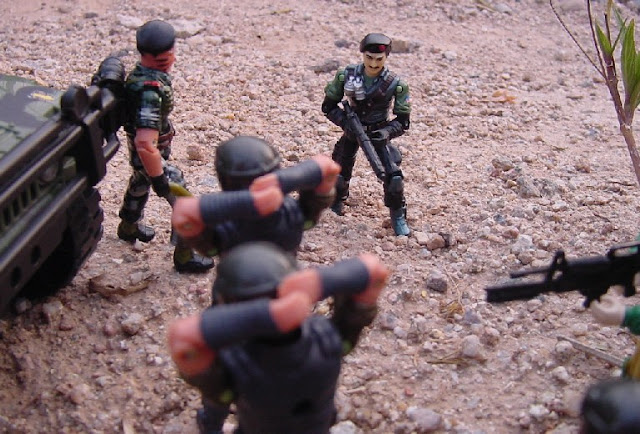 Posted by Robot_Sonic at 9:08 AM
Email ThisBlogThis!Share to TwitterShare to FacebookShare to Pinterest
Labels: 2002, BJ's Exclusive, Dial Tone, Dialtone