As a kid, I made sure that every December I was a frequent visitor to the local toy stores. It started in 1984 when the Dreadnoks were early released before Christmas. I don't recall finding anything in 1985. In 1986, though, I found the new armored Cobra Commander and Falcon in late December. As such, in December of 1987, I was very happy to find some new figures hanging on the pegs of my local Toys R Us store. These new figures were all more sci-fi type toys who were members of a new subset named Battleforce 2000. They used more hi-tech weaponry and featured molds that were covered with technological trappings. But, they also featured solid, muted colors that kept them in line with many of their contemporary Joe releases. Upon finding those 6 new figures, I purchased a Blaster and Knockdown (Don't ask me why. To this day I have no explanation as to why Knockdown was my 2nd choice.). My younger brother purchased a Dodger and my youngest brother brought the subject of this profile into our household: the 1987 Maverick.

Maverick was Battleforce 2000's pilot. On that level, he is quite successful. The figure mold looks like a pilot, albeit a futuristic or experimental one. His colors make sense for a flight suit and his removable helmet easily fits the pilot motif. Honestly, this figure could very easily have just been a newer version of Ace and no one would have thought differently of the figure. The mold is well done, just detailed enough and featured sensical colors that mesh well with each other.

Battleforce 2000 was one of Hasbro's early attempts at using a gimmick to sell figures. Each of the 6 original members of the team were intended as vehicle drivers for a series of futuristic vehicles. The selling point was that if you owned all 6 vehicles, you could transform them into a mobile fortress. My guess is that the idea was born in the popularity of Transformers and this was the best way to cross pollinate the lines without being too blatant about it. The execution was fairly poor, though, as I've always found the vehicles to be pretty much crap. They look clunky and fall apart easily. The figures, though, were a different story. While intended to be futuristic, they all featured solid color schemes that made the figures useful in venues outside of their intended focus. As such, the line has some use in the modern collection, even if it is only for the figures.

In this day and age of copyright infringement and lost names, it's pretty much unfathomable how Hasbro was able to produce a pilot figure named Maverick so soon on the heels of the Top Gun movie. But, they did it. The only way this guy would have been a more blatant rip off would have been if they included him in a re-release of the Skystriker at the same time. But, the name does work for a pilot, even though Maverick's filecard seems to paint him as more of a square rather than a bold, daring individual whose personality would fit his moniker. It does, though, help reinforce my personal notion that all of BattleForce 2000 was kind of a throw away gimmick. While the toys were cool upon their initial release, the who schtick got stale rather quickly and Larry Hama's summary elimination of almost all of BattleForce 2000 in the comic really reinforced my opinion that the entire subgroup really had little purpose beyond selling a few extra toys one holiday season.

In my collection, I don't have much use for the Maverick character. Instead, I have long used this figure as an army builder. He would be a nameless pilot or a firefighter. Where the figure truly found it's niche, though, was as a jet pack trooper. I never felt that Starduster's design really fit a jet pack soldier. He simply didn't have enough protective gear. The jet pack would produce burning hot exhaust that would require a flame suit. It would also generate gases that would be hazardous to breathe. Plus, anyone flying face first at a high speed would find it difficult to breathe. Thus, I found that Maverick's mold lent itself perfectly to the vision I had of a jet pack trooper. His thick uniform was fully insulated against errant jet plumes and his strategically placed body armor offered him some protection from debris in the air. His helmet locked in fresh air and also gave him a quiet environment from which he could communicate with his fellow jet pack troopers or the ground control. In sum, it was the perfect outfit for what I wanted my jet pack troopers to be.

Now, I use Maverick as the nameless jet pack troopers who soften up Cobra installations. They are a foolhardy, but brave crew who have a survival rate in the low 20% range. They are danger merchants who really don't understand that they are flying at low altitudes using a pack that is difficult to maneuver over a group of highly armed, ruthless villains who find humour in turning a jet pack trooper into a streaking ball of fire. They don't really fathom that one shot turns their liquid fuel jet packs into flying bombs. Nor do they really realize that their helmets will not protect them should they crash into the ground, a tree, a mountain, each other or just about anything else headfirst. What they do understand, though, is that they have a feeling of immense freedom as they come as close as is humanly possible to individualized flight. They relish in this and feel a great surge of superiority as they swoop over their enemies and rain automatic weapon fire upon them. This more than makes up for their remorse when less than half of their crew returns from any mission alive.

Maverick's mold saw release in the U.S. However, in Brazil, the mold took on new life as it was used multiple times in several Brazilian exclusive ways. The entire Battleforce 2000 squad was released in Brazil in colors very similar to their American counterparts. Blaster, Blocker and Dodger all then reappeared in India. Avalanche showed up in the US in 2005 when he was used in the Winter Operations set. Knockdown never appeared in his original form again even though his body was used on the Biologico figure. Maverick's mold was used for several Brazilian figures. His entire mold was repainted in the Forca Eco series as Biomassa (which you can see in the photos below). Maverick's chest and arms later appeared in the Patrulha Do Ar series as part of the Aguia Comando figure while his head and helmet were used on Albatroz. After that, the mold pretty much vanished. It is not known if this mold is available to Hasbro or has simply been written off. But, Maverick fans do have a nice variety of figures they can use to represent the character.

Surprisingly, Battleforce 2000 figures aren't all that common. While they are no where near as scarce as contemporary subsets like the Night Force or Mission to Brazil, they are also not as ubiquitous as their regular retail brethren. They likely had a truncated production run since the carded figures did not appear until late 1987 and the 1988 releases were lesser produced 2 packs. Of course, none of this translates to expensive figures. Back in 2001 and 2002, you might have paid $12 for a complete Blaster or for the variant Blocker. Now, though, all of the Battleforce 2000 figures can be had for half of that. At that price, I think Maverick is a good pick up. The figure is a solid pilot mold and looks good in most of the higher quality Joe aircraft. His colors make sense and his accessories are fun and useful. There's not much more you can ask out of a Joe themed figure. 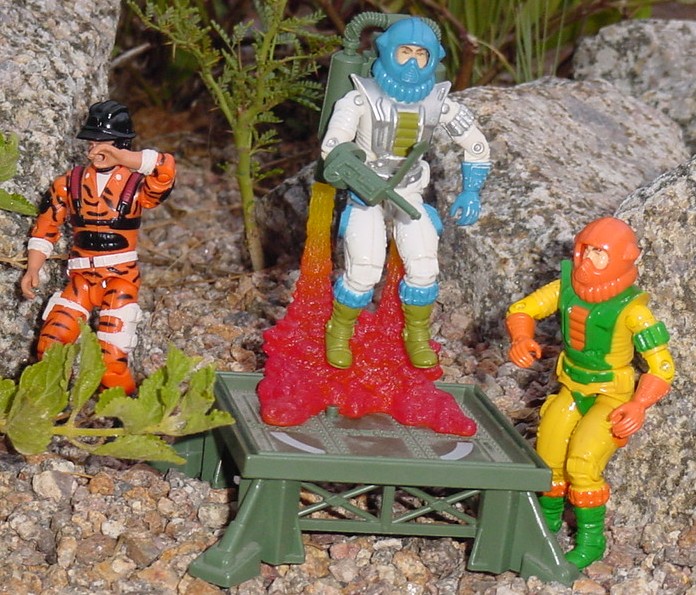 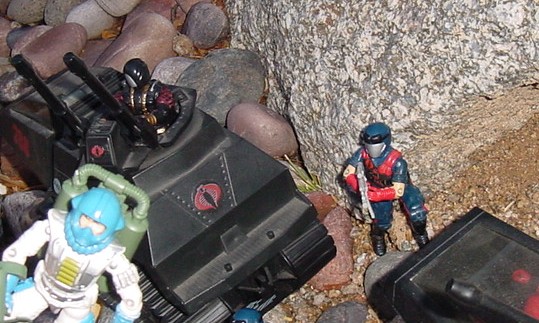 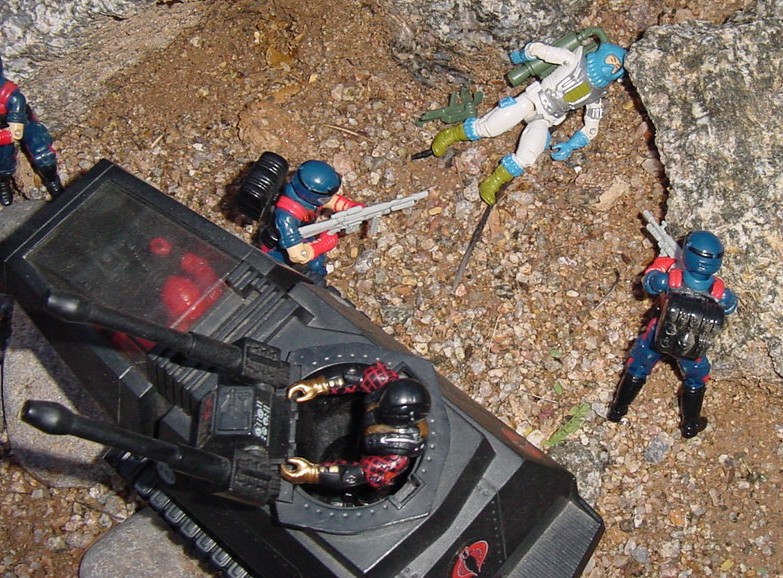 Posted by Robot_Sonic at 4:10 PM
Email ThisBlogThis!Share to TwitterShare to FacebookShare to Pinterest
Labels: 1987, Battleforce 2000, Maverick