I have not purchased any newly released Joe toys in over a year. In that time, I have found Hasbro's offerings to be rather uninspired. They simply offered nothing new to my collection. Those that showed some thought in design were often relegated down the desirability scale by the fact that the actual figure construction wasn't all that interesting. There just hasn't been anything released that's been the type of thing that I had to add to my collection. Finally, a few weeks ago, I broke down and purchased the Lady Jaye comic pack. I really did this for the Gas Mask Troopers as they are similar to the Comic Pack Cobra Officer figure which I really liked and they include Red Star rifles. Once I opened the set, though, I found I was pleasantly surprised by the Lady Jaye figure and have thusly decided to make her the 300th figure I've profiled.

While I'm not a Lady Jaye fan, I found myself pleasantly surprised by this figure. The colors are a nice departure from other incarnations of Lady Jaye, the smaller body sculpt and new head make her appear more feminine and she actually fits in with figures from earlier in the line. As such, I think this is a good figure. But, that's all. The reality is that had this pack with Lady Jaye and 2 Gas Mask Troopers been released prior to 2001, it would be one of the highlights of the entire repaint ARAH style line. Instead, at this late release, it mostly more of the same and the entire pack just seems...tired. There is nothing really fresh, new or exciting about it since we've seen so many classic characters redone and redone in so many styles. While Lady Jaye doesn't have the overkill of a character like Duke or Cobra Commander, she has seen 4 unique releases in the past decade (plus her body was used for Daina) and none of them really offered a package that was so totally different from the previous releases that it stands on its own. This figure is no exception. It's nice to have a Lady Jaye without her hat. But, it isn't the type of earth shattering, risk taking figure that makes collectors take notice.

In retrospect, that really can be said about much of the line we've seen since 2000. This Lady Jaye figure represents the first Joes I've bought at retail in over a year. A full year. I haven't gone that long without buying Joes at retail since 1989-1992. That includes time like '95 to late '97 when Hasbro wasn't producing Joes. I was still finding old stock at retail. Same in '99 and early '00 when there weren't any new figures coming out. I always had toys to buy. This past year has been different, though. Even though there were a few new comic packs for me to seek out, I didn't. None of the offerings held any cachet for me. I looked at them and just felt a strong disinterest in the hobby. Really, Hasbro's treatment of Joe in the past year has left me burned out. I found little in the hobby to enjoy. The constant nonsense of the "deth of the line!!!" really got tiresome and killed off a lot of my interest. Judging by the activity you see in the Joe community, I was not alone. I would wager that Hasbro ran off a lot of casual fans in the past year with their handling of the Joe line. Truthfully, I'm not sure we'll ever see a resurgence in popularity for the 3 3/4 figures like we had from 2001-2003. But, when I look back at the figures we got in that time, I'm not so sure that's a bad thing.

Lady Jaye has never had much of a role in my collection. Even as a kid, I ignored the figure. (Which was nice in the early days of collecting as Lady Jaye figures tended to run upwards of $20 and I had a perfect one from childhood.) I just never really had much use for the character. Now, little has changed. Lady Jaye just isn't a player in my Joe world and I don't see that changing. As this figure is nicely done, though, I can see it appearing in the background of various scenes. The unique helmet was a nice touch from Hasbro and makes this figure useful on the Silver Mirage. But, that's about as far as she'll ever be used. When the time comes to actually display my figures, I could see this version hiding among my other '85's instead of the original.   This Lady Jaye's accessories are decent for what they are. The new helmet is cool, but doesn't really fit on the figure's head and looks a bit awkward. It is definitely an accessory that you need to have the figure holding rather than wearing. The small pistol that is included with the figure is comic accurate, but so overused that it's pretty inconsequential. The upside is that Lady Jaye accessories have become much easier to get these days so it's not outside the realm of possibility that you could easily buy some vintage or '98 Volga accessories for cheap and outfit the figure with those. One note of caution, though. As this Lady Jaye has the new, smaller body mold, original versions of Lady Jaye's backpack will not fit into her back. So, you'll have to find a smaller pack should you want to fully accessorize your Lady Jaye figure.

Let's face facts: the Joe line is dead. There is no product planned for release aside from the promise of a 25th Anniversary line that is more than a year away from planned release. (And, that line will likely be a completely new, 3rd type of construction that will not be compatible with either of the existing incarnations of 3 3/4" Joes.) There is nothing else on the horizon. These final comic packs, Wave 4 of the single packed figures and the final 2 six packs are the end of the retail run that we have enjoyed since 2000. Sadly, these final offerings should have been the first. Had they appeared earlier in Joe's rebirth, I think they would be held in high esteem by collectors. Now, though, they seem tired and unimaginative and I suspect that these final pieces of the retail run will be largely forgotten by collectordom as we move further and further from their release. They simply lack the power to sustain their popularity over time.

Had this three pack been released in 1997 or 1998, it would be held as one of the greatest packs Hasbro ever produced. At that time, the notion of a hatless Lady Jaye and 2 new troop builders who were based on classic designs would have been a great seller and a pack that would have seen great secondary market activity. By 2006, though, that is not the case. At this point, we've seen the Lady Jaye mold used twice for Lady Jaye and again for Daina. This is the fourth use in under 2 1/2 years for the Cobra Officer mold. That overuse leads to apathy and collectors aren't fawning over these releases like they would have only a few short years ago. That doesn't detract from the what the figures, by themselves, actually are. They are useful parts of a collection. But they are not the integral parts that we should have seen from Hasbro at this stage in the evolution of the repaint line.

This mold is very interesting. It is not the Lady Jaye mold that was used in 1985, in India, in 1997 or even in 2003. Instead, it is a newly sculpted mold. It first appeared on Daina in 2005 and now appears here. As you can see from the 1st photo below, this mold is smaller and more feminine. It also lacks a few of the details from the original mold such as the buttons on the figure's chest pockets. I find this rather odd. Let's face it, this figure isn't going to be appreciably more popular or sellable due to this smaller mold. In fact, I doubt many collectors noticed. The original mold was available as recent as 2003 and had no issues. So, why would Hasbro go through the trouble of resculpting this mold when there are so many others (like the V2 Snake Eyes, V1 Cobra Commander, Headhunter, HH Stormtrooper, V1 Destro) that collectors would kill to see redone? It's an odd occurrence that is more common in the comic packs than it might first appear. We may, someday, get the info from Hasbro as to why this is. But, for now, it remains one of the little mysteries of the modern line.

Lady Jaye's availability is still uncertain. It is most likely that being in the last wave of retail comic packs, she was produced in smaller quantities than even the Oktober Guard comic pack wave. However, she was not nearly as anticipated as the Oktober Guard, she was available in collector oriented outlets and the collecting world is MUCH smaller now than it was even in early 2005. Plus, there were many collectors who bought this pack in multiples just to acquire the Gas Mask Troopers. So, I don't foresee this Lady Jaye figure ever being highly expensive on the second hand market in the current collecting atmosphere. Sadly, due to the current state of the collecting community, I find it likely that this Lady Jaye figure will end up rather forgotten as time goes on. She is neat, but not so great that collectors are going to go out of their way to seek her out. 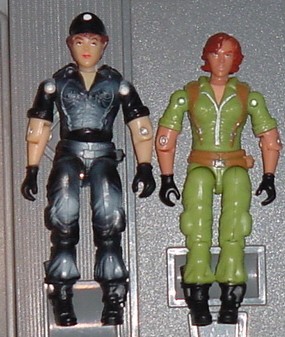 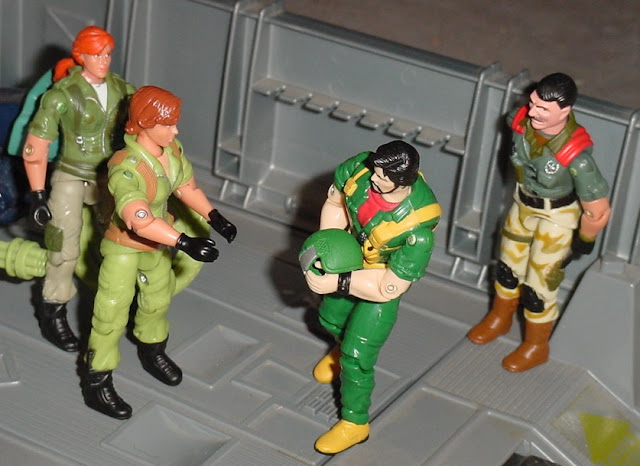 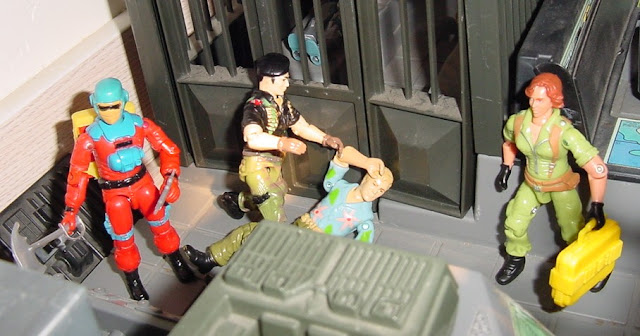 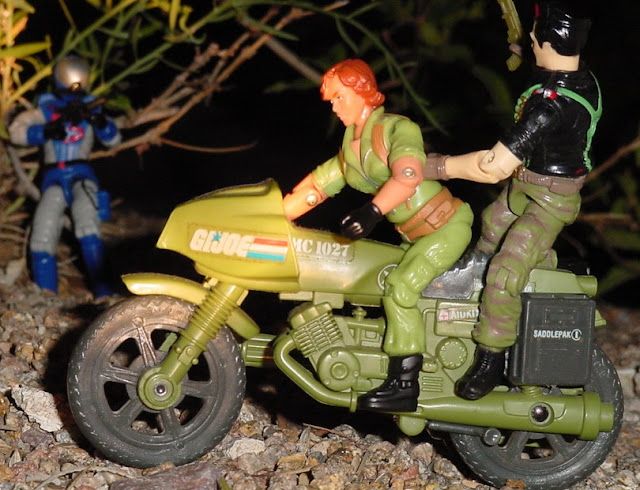