In the pantheon of Cobra characters, Dr. Mindbender is certainly near the top. One of the most recognizable and oft-used Cobra lackeys in Joe media, Mindbender is the perfect villain: vainly and oddly dressed, egomaniacal and overly ambitious. Why, then, have I only visited the character one time in 7 years of profiling figures? I think the answer lies in the fact that there really isn't a released ARAH version of Dr. Mindbender that lives up to his characterization. His second version is bright neon, even if a solid mold. The original figure, and subject of this profile, is better, but still has some of the goofiness that keeps it from being great.

Dr. Mindbender went through quite an evolution in the design process. He was, at times, a circus performer, a former professional wrestler and went by the Dr. Brainwave. The final character that was settled on for this design, though, was an orthodontist who experimented with the brain as a means of pain control. He then went mad after experimenting on himself. This works on many levels as it establishes the character's intelligence but also gives him a comic-book type origin that reconciles with his outlandish attire. The figure itself his a mash of flesh and purple. When adorned with his signature cape, the figure is set against a nice black backdrop. The mold is tightly designed and features the details that were the hallmark of earlier Joe molds. His has pushbroom mustache and a monocle that define his countenance. They are the characterizing marks (like Major Bludd's eyepatch) that enable Mindbender to remain a villain even though his full face is exposed. His ensemble is completed with oversized boots and metallic looking suspenders that were, no doubt, used to accentuate the good Dr.'s abs. The colors do work well together, even though they were a departure from earlier Cobra villains.

In my collection Dr. Mindbender is less Cobra strategist and more mad scientist. I have had the Dr. recover from his horrid scarring that was evident on the unreleased 1995 figure, but have left the mental scars of being such a monster behind. These days, my Mindbender roams a dark, underground laboratory on Cobra Island where he creates genetic mutations and works to perfect surgical and chemical methods of enhancing human strength, intelligence and endurance. In these depths, Mindbender is more of a spectre to most of Cobra. He has a dedicated group of "Acid-Vipers" (the purple 2002 Viper figure) who do his bidding. When they are seen above the surface, it means either that the Dr. has achieved a breakthrough in his research or one of his monstrosities has escaped and is once again terrorizing Cobra Island.

With this characterization, Mindbender is no longer a trusted member of my Cobra hierarchy. He remains a powerful ally to those in power as Mindbender holds the keys to the most horrid dungeons and torture chambers in the world. That alone makes him worth having around. This leads to those in power tolerating Mindbender and placating his needs. He has an ample research budget, a wealth of human test subjects (with no pesky moral guardians to keep him from destroying them in any manner he sees fit) and free reign to conduct his experiments. When something goes wrong, the full might of the Cobra army is at his disposal to eliminate and problems that escape his lab.

I view Mindbender as a man of incredible intelligence whose moral compass was lost in his accident. As he has experienced disfigurements beyond the recognition of most people, Mindbender has fallen even deeper into the depths of his black mind. He doesn't flinch at the most gruesome tortures or experiments. His mental illness is simply so far gone that he lost all human compassion. His minions of Acid-Vipers share this mentality. When he ventures from his lab, though, Mindbender can still show glimpses of his former self. He is still rational and listens to those above ground. Once in his lab, though, all bets are off and he is capable of acts that defy description.

One of the reasons why Mindbender has become such an ghost of his former self is because none of his figures really give me the look I can imagine for someone of Mindbender's established, canonical character. While this mold is excellently designed, he still looks like a circus strongman. It's hard to take him seriously in a militaristic organization like Cobra when he's dressed like a sideshow attraction. Thus, I had to find other uses for the character. My development of Mindbender keeps him in the minds of the other, more figure-friendly Cobras, but also keeps Mindbender's figure out of the limelight.   Don't get me wrong, though. I like this version of Dr. Mindbender. As a design, it is quite good and fits with his super-villain personality quite well. The mold is well adorned with small detail, solid paint applications and great accessories. His cloth cape was one of the best ever offered in the vintage line and remains a staple of the character to this day. Like other characters such as Raptor and Big Boa, though, the actual design of the figure simply no longer fits with the look of my Cobra hierarchy. Until Hasbro releases a new ARAH style Dr. Mindbender, the character is doomed to his more obscure role in my collection. This is too bad as I do like Dr. Mindbender as a character. His influence over Cobra shaped much of how my current Cobra world is structured. His role in Serpentor's creation generated political fallout that is still felt almost 2 decades after that scientific achievement.

After its use in the US and Europe, the V1 Dr. Mindbender mold was sent down to Brazil. He was released there as part of the Iron Grenadiers subset. After that, the mold never surfaced again and is presumed lost in South America. (Mindbender's Brazilian contemporaries included the Astro Viper and V2 Destro, both of whom have resurfaced but also Overlord and the Iron Grenadier, both of whom are lost.) This was the fate of both retail releases of Mindbender as his '93 figure was also released in Brazil and never appeared again. As such, Dr. Mindbender has not been revisited in ARAH-style since the rebirth of the line in 1997. He is one of the biggest characters who has yet to appear. But, since any appearance would require retooling of at least the character's head, it is unlikely that we will see a Dr. Mindbender figure in the near future. If you collect new sculpt figures, one of the highlights is the 2003 Dr. Mindbender in a lab coat. This is a more scholarly Dr. Mindbender and an idea that would be welcome in ARAH style.

Time was, Dr. Mindbender figures would set you back a bit. I distinctly remember selling a complete version for ~$15 back in late 2000. They climbed a bit above that in 2001 but have since fallen quite a bit and can now routinely be had for ~$11 for a mint and complete version. As the figure's mustache is very susceptible to paint wear and it is unlikely we'll ever see this mold again, that is probably a fair price for a pristine specimen. I keep two of this figure in my collection (one for display and one for use) as the character is so important. Mindbender is a staple of pretty much every Joe collection and still stands as one of the best developed Cobra characters. It's just too bad there aren't more figures choices to represent him. 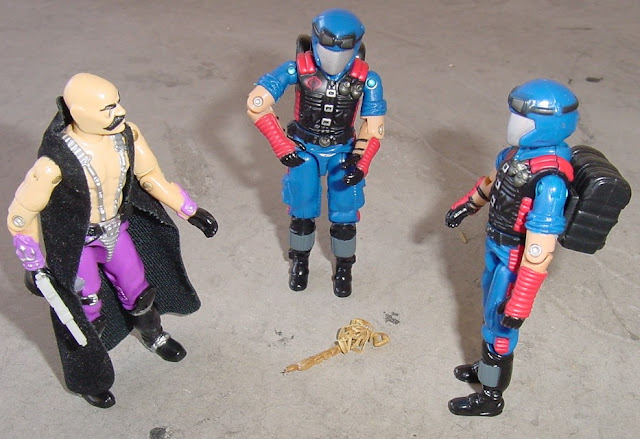 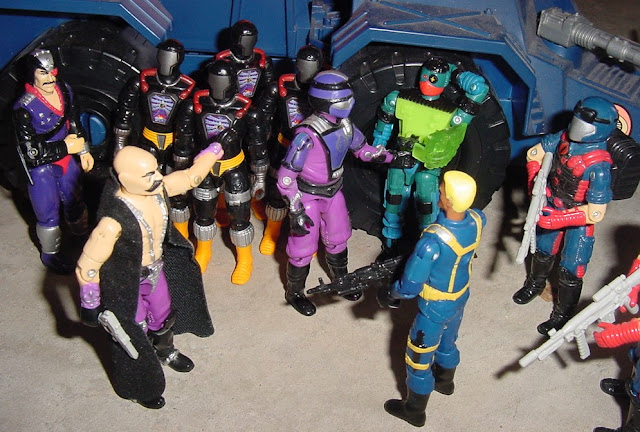 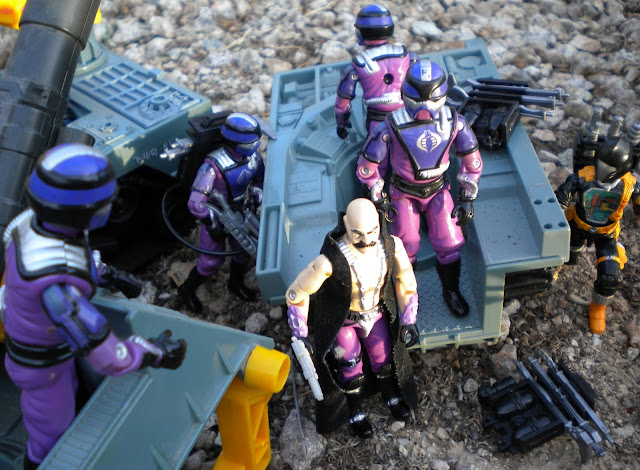 Posted by Robot_Sonic at 9:33 AM
Email ThisBlogThis!Share to TwitterShare to FacebookShare to Pinterest
Labels: 1986, Dr. Mindbender