Quick, without looking, what does the Wild Boar figure look like? For most collectors, this isn't a question that's easily answered. As forgotten figures go, the Wild Boar is among the most unheralded figure releases ever offered by Hasbro. The reasons why are many, but they show how even a decent figure, released at the wrong time in less than stellar colors, can be overlooked by the collecting community at large. What do you do with a figure who is blandly colored, features incredibly fragile paint and is incredibly obscure? In many cases, the answer in my collection is something rather unique and different. However, in the case of the Wild Boar, I have yet to find a great niche for the figure. While the mold has its upside, it also is fairly boring. Plus, the gold paint is so fragile that even the slightest use can drop a mint figure down two or three condition grades. That type of fragility can be excused on a figure with a great design. But, for a figure that uses only 4 colors and is rather basic it is a death knell.

The Wild Boar was introduced in 1989 as the driver of the Razorback. He was part of Destro's Iron Grenadier army. The Razorback itself was a kooky design that had its charms. But, the gold coloring made it more than a little bizarre to look at. In that regard, the Wild Boar fits right in. The figure is uniquely designed and his coloring does not fit with the rest of the Iron Grenadier color scheme. The figure seems gangly to me. His design is such that it appears he is all limbs. It is likely that this is due to the way the figure was colored. The figure's torso is dark black and is set against bright red arms and legs. As such, the limbs stand out and appear longer than they really are. The figure's torso is left completely unpainted except for a fragile Destro logo on the right shoulder. This is unfortunate as the mold actually features some decent details that are lost in the darkness. Even one additional paint application on the torso would likely have given this figure much more life.   The Wild Boar included 2 accessories: a helmet and a hose. The hose plugged from the helmet to the figure's arm. The idea was that the targeting was directly linked the driver's sight. Neat idea. However, the result is that the hose is very bulky and the look of the figure when fully accessorized leaves something to be desired. The helmet is interesting. As a design, it looks good. But, why would the Wild Boar need a helmet with goggles when the driver himself is already wearing goggles? Much like the Viper, this redundancy doesn't make much sense. It is further exacerbated by the fact that the helmet doesn't fit quite right and the figure looks awkward when the helmet is properly affixed. Of course, by covering the golden goggles of the figure with the helmet, you risk rubbing away the golden paint that marks the figure's eyewear. You will find many a Wild Boar that no longer bears any hint of gold paint on the goggles, even when the rest of the figure lacks any noticeable wear. It is a flawed design at best.

After reading all this, I asked myself why, again, I profiled this figure. The answer was that the fragile gold paint made for a now hard to find mint figure and I wanted to showcase an example of how bad design can basically destroy a figure. This has also become more relevant in recent months as Hasbro seems to be repeating a few of these mistakes with their 25th Anniversary line. Already, silver paint on figures has proven fragile. Many of the army builders feature tight fitting helmets that are affixed over painted heads. Even for the hardened adult collector who is anal about the condition of his figures, design flaws like this can lead to many inadvertent damages to figures. The act of placing a figure's accessories onto the figure should not automatically deteriorate the figure with each use. It's one thing for standard play to rub paint away. That's normal and acceptable. But, placing a helmet into place the first time should not scrape away the brand new paint on any toy.

At its core, the Wild Boar could easily be mistaken for an updated Hiss Driver. The figure is mostly red, comes with an armored vehicle and has a very basic design: just like the vintage Hiss Driver. The difference, though, is that the Wild Boar is a testament to unfulfilled potential. The figure features a nice depth of detailing and design. But, most of this is unpainted and lost in the sea of dark red that comprises most of the figure's coloring. Still, in my collection, this is the figure's role. But, even that is limited. I prefer to have Track Vipers man my Hiss Tanks. Beyond that, there aren't many vehicles that I have in my collection that mesh well with the bright red of the Wild Boar. As most of my remaining Cobra vehicles are blue, black or crimson, the Wild Boar clashes with the Cobra vehicles that see the most use in my collection. The figure is a bit too bright for the Crimson ranks. Plus, Hasbro has made enough Crimson figures available in recent years that I am able to find adequate drivers for my Crimson Hiss Tanks.

Years ago, I was in the market for a Razorback. At the time, they weren't terribly expensive and they were relatively available. However, I discovered a site that sold Funskool vehicles. (This was before any American dealer was importing Funskool product.) They had a Funskool Razorback in stock so I ordered it. That took me out of the market for the vehicle. After a few weeks, I checked my credit card statement and found that I had not been charged for the vehicle. I then went back to the site to discover that they did not ship outside of India. By this time, my interest in the Razorback had waned and I did not pursue it again. To this day, the vehicle is one that I've never owned. But, as I'm not a big vehicle collector anymore, the Razorback isn't something that I think I will be adding to my collection at any point in the near future. Even though it would give a home to my cadre of Wild Boar figures.   The Wild Boar mold was used just this one time in any Joe line. Unfortunately, it was used again, though, by Olmec toys in their Bronze Bombers line. Here, you can find a few Bronze Bomber figures who utilize the Wild Boar mold in various colors. None of the figures reuses the Wild Boar head, though. As the Wild Boar appeared in the Bronze Bombers, the mold is likely gone forever. But, unlike the Secto Viper, Strato Viper or Motor Viper molds that also appeared in the set, I don't think collectors missed out on too much by this mold's absence. While I think the Wild Boar mold could be put to good use, the reality is that if Hasbro is going to spend money recreating a vintage style mold, the Wild Boar would probably be in my bottom 10% of figures I would like to see redone. As the figure is so obscure, I'd say it's unlikely that we'll ever see the Wild Boar appear again in any mold that is similar to this one.

If you want a Wild Boar figure, they aren't too terribly tough to find. However, if you want one that's in mint condition, that gets a lot harder. The gold paint on the figure's goggles and the Destro logo on the right shoulder is as fragile as any paint in the line. Pretty much, if the figure's helmet was ever put on the head, it is likely that the goggles will have some paint wear. The Destro logo rubs off with the slightest pressure and many people do not even realize that it should be there since it is possible to have an otherwise pristine figure that is missing all traces of the Destro logo. On top of that, the figure has a fragile nose and the flesh colored paint often rubs away, leaving a large black pox on the figure's face. All this adds up to a figure that is really difficult to find in mint condition. As such, you will see collectors pay a premium for a nicely conditioned specimen. In recent months, mint Wild Boars have sold for as much as $40. But, that is hardly the going rate. You see, no one really cares about the Wild Boar. So, unless two sticklers for condition are searching for a Wild Boar at the same time, the price for a mint, complete version tends to be closer to $18 or so. Price guides, though, haven't caught on to the figure's rarity. So, if you can find one in a second hand toy shop, they are often sold for under $10. (You just have to find them!) All this still adds up to a price that is a bit much for what the figure offers. Such a basic design with bright colors that has limited use really isn't worth that kind of money or trouble. For me, it's a figure that checks a box in my list of needed Joes. Beyond that, the figure sees little use. As this isn't a figure you see very much of in any Joe medium, it seems I'm not alone in that assessment. 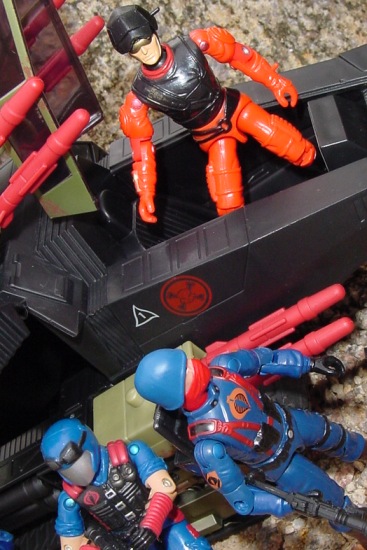 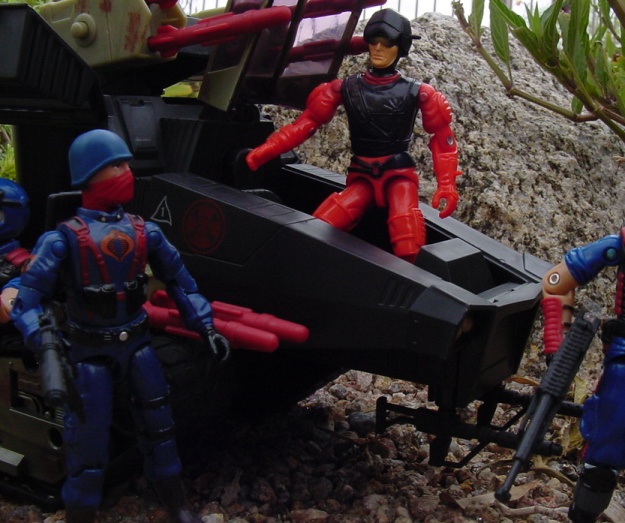 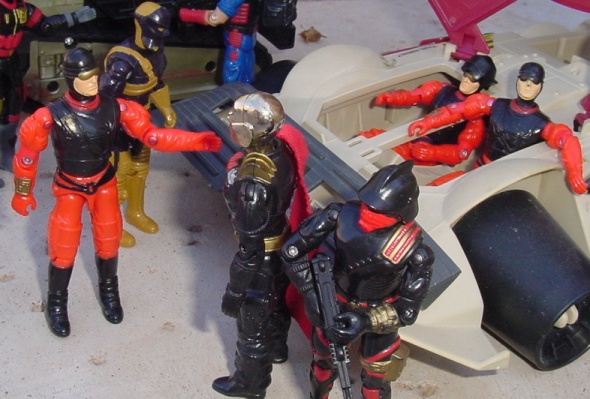 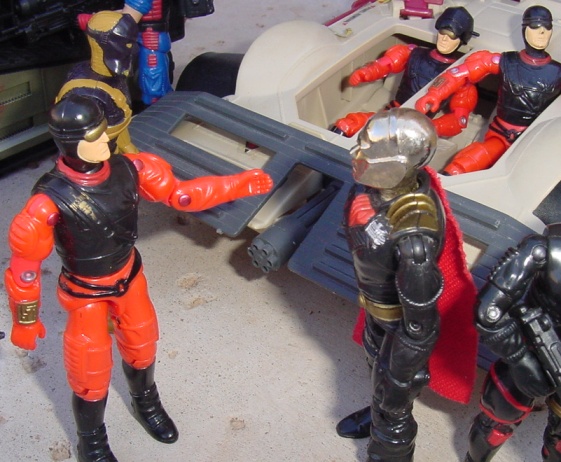 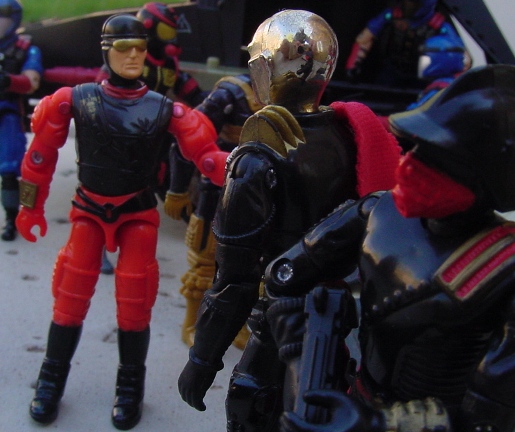 Posted by Robot_Sonic at 11:15 AM
Email ThisBlogThis!Share to TwitterShare to FacebookShare to Pinterest
Labels: 1989, Vehicle Drivers, Wild Boar