In 2001 and 2002, the main focus of the collecting world was army building.  It dominated most of the discussion of the time and collectors were desperate to acquire as many army builders as they could.  By 2005, though, the army building appetite had been largely sated.  That isn't to say that collectors didn't still buy up troopers at much faster rates than characters.  But, collectors were much more focused and no longer army built every single figure that was released.  This was largely due to the fact that Hasbro had given collectors repaints of classic molds such as the Cobra Trooper, Viper and Crimson Guard.  But, they had also given collectors tons of army building figures in the new sculpt line.  By 2006, collectors had a bit of army building fatigue.  However, there were still a select few figures for whom collectors could get excited.  They were high quality molds of which collectors desperately wanted repaints.  Two of the highest figures on the list were the Headhunter and Headhunter Stormtrooper.  But, most collectors had resigned themselves to the fate that the molds were lost in Brazil in the mid '90's.  In 2008, however, Master Collector pulled a surprise and both the Headhunter and Headhunter Stormtrooper molds appeared in a convention set.

At first, enthusiasm among collectors was extremely high.  They had great expectations of what Master Collector could do with these molds.  But, then the painted samples came out.  Master Collector tried a color called "arsenic" as the basis for their Headhunter figures.  While the idea sounded good, the result was met with general malaise among the collecting world.  The arsenic looked more aqua blue and didn't really mesh with the black details on the Headhunter Stormtrooper or Gristle figures.  The result was that the set was largely viewed as potential unfulfilled.  Since then, though, the collecting world has taken both tacks with this set.  The Headhunter Stormtrooper figure is criminally cheap and readily available.  This Headhunter Guard, though, has become very hard to find and has actually started to get expensive.

The highlight of this figure is the new logo designed for the Headhunters.  It incorporates a small Cobra sigil.  But, the main focus is a large skull with arrows pointing out of it.  Obviously, it is a play on the whole "headhunter" motif.  But the logo is large and prominent on this figure.  As the figure is somewhat hard to find, having such a specialized logo does help distinguish the Headhunter Guard as something special in the Cobra ranks.

The arsenic color is supposed to be a blend of green, blue and grey.  When offset by darker colors, the blue really comes out and the figures with both look more like the '93 neon figures than something offered in a convention set.  This soured many on the color overall.  But, when used as the primary base for a figure (like this Headhunter Guard) it is much easier to appreciate the coloring.  This figure showcases what arsenic was meant to be.  The black and gold accents enhance the color rather than overpowering it like the black on the other figures does.  The result is a figure that is quite good.  While not in traditional Cobra colors, the figure is something different.  As the Headhunters are more outsiders to Cobra than full operatives, this distinction works.

The accessories for this figure are both well done and really crappy.  The figure features his vintage backpack with the awesome shotgun holder.  But, in lieu of giving this figure his vintage weapon, Master Collector gave him 2 JvC era sculpt weapons.  One is a shotgun and the other is an odd, throwback pistol.  These sculpts are neither good nor bad.  But, they are painted to have wood accents.  So, that's a plus.  But, neither weapon fits into the backpack.  So, if you holster the shotgun, it falls through and into the grass/sand/water/carpet below, perhaps never to be seen again.  In addition to these smaller weapons, the figure also includes a JvC era AK-47.  This isn't a terrible accessory choice.  But, it is one of the earlier new sculpt weapons and the scale is off with ARAH style figures.  Again, this weapon has wooden painted accents.  But, Master Collector painted the handle.  So, the one area of the weapon that would be most susceptible to wear was the area they painted.  Regardless,the overall complement doesn't work all that well with this figure.  The large assault rifle makes little sense for compact, urban warfare.  And, since the shotgun doesn't fit into the holster, it loses its impact.  Master Collector at least tried on the accessories.  But, their weapon choices are often baffling.  And, those included with this Headhunter Guard show that they still don't quite get how to properly accessorize a figure.

For me, this figure is interesting, but not essential.  The original 1992 figures are better army builders for their urban combat specialty.  The Headhunter Driver's black color dominance makes him a better blend with the vintage figures as well.  But, when I'm looking for something slightly different in the Headhunter realm, this figure does work well.  The convention set included a fairly well done Gristle figure.  These Guards do fit perfectly with him.  But, Gristle is an obscure character and isn't someone whom I'm inclined to center a full display around.  I do have to admit, though, that the arsenic has grown on me.  And, when I liquidated large portions of my collection, both Gristle and the Headhunter Guards survived the cut and remained in my possession.  So, that does mean I like on a deeper level than I ever thought I would upon first seeing them.  They are not essential figures and I would not seek them out did I not already have them.  But, they are cool enough in mold and color to keep around.

The Headhunter mold was used by Hasbro in 1992 and 1993.  After that, it was sent to Brazil where the figure was released in colors similar to the 1993 version.  The mold then went missing for 15 years despite strong collector outcry for a re-release.  In 2008, Master Collector found the mold and repainted it as this Headhunter Guard and also as the much harder to find Headhunter Driver figure for that year's convention.  Since then, the opportunities to release ARAH style Joes has been extremely limited and the Headhunter mold has not appeared since.  Since the re-release, vintage Headhunters have gotten a bit cheaper than they were a few years ago.  But, the convention figures have climbed in price and remained very popular.

When this figure was first released, the reaction from the collecting community was lukewarm and the aftermarket prices reflected that.  However, in recent years, the supply of these Headhunter Guards has dried up.  Today, these figures can sell for as much as $40.  (Contrast this to the Headhunter Stormtroopers from the same set who rarely go higher than $12.)  Only being packed 2 per set and the fact that not everyone was enamored with the color scheme has lead these figures to becoming somewhat scarce.  For the price tag, I would just stick with vintage Headhunter figures.  They have better accessories, more solid construction and can be had for less than 1/3 the price of this figure.  But, this figure is a decent addition to a collection.  It is something that gives the Headhunters more depth.  I would have much rather had a Cobra blue Headhunter figure.  But, honestly, this Headhunter Guard is better than no Headhunter repaints at all. 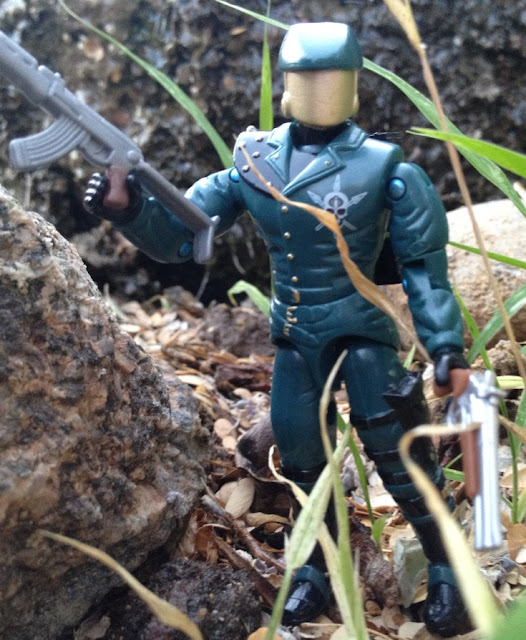 Posted by Robot_Sonic at 9:26 AM
Email ThisBlogThis!Share to TwitterShare to FacebookShare to Pinterest
Labels: 2008, Convention Exclusive, Headhunter, Headhunter Guard