Since the earliest days of online Joe collecting there have been a few staple customs that just about every collector has attempted. They were almost always cartoon or comic book inspired figures. The earliest custom sites were heavily populated with various takes on Dr. Venom, Kwinn, the Oktober Guard and renditions of Snake Eyes' Vietnam era LRRP. When Hasbro announced the comic book inspired figure packs, collectors were quickly overwhelmed by ideas of these long awaited figures finally coming to life. And, most of them did. In some cases, though, the culmination of years of anticipation was a figure that was a fairly lazy and boring repaint. In other cases, though, the product was highly inspired and easily up to snuff of the expectations many collectors had set. The long awaited Vietnam comic pack was a mixed bag. The Stormshadow figure didn't do anything for me. The Snake Eyes was cool, but the mold is still too ingrained in my mind as Gung Ho. Stalker, though, is actually one of the highlights of the entire comic pack run for me: even though, on the surface, the figure isn't that different from many that we'd already seen.

In 2004, Hasbro retooled a new Stalker head for use in the first wave of comic packs. To be honest, I didn't really like it in conjunction with the original Stalker body mold. The head was highly detailed and slightly larger. While it wasn't really out of proportion for the original body, the reality was that the original Stalker was so iconic that anything other than the original head looked out of place on that body mold. With this figure, that problem is solved. This version of Stalker uses the V1 Duke chest mold. The result is a completely new look for Stalker that allows his new head to escape the shadow of the original figure. What didn't work for me on the first attempt at an updated Stalker figure ended up being a welcome respite once it was paired with another body mold.

It is that body mold that was an interesting choice. If you had told me back in 2005 that one of my favorite comic pack figures was going to be a Stalker that used a Duke chest mold, I wouldn't have believed it. But, the body mold really does work. Typically, I'm not a fan of the original Duke. But, colored green, the chest does give off a Vietnam era military vibe. We have never seen these parts colored in this way, so this use of the parts, even though they were close on the heels of several Duke figures that also used them, didn't seem as stale as many of the other comic pack figures who also reused common parts did. Stalker was also given the standard V2 Roadblock waist and Sonic Hawk legs. While these parts are also overused, they do help give this Stalker figure a little girth. As such, he doesn't appear as small as many figures that use solely '82-'84 parts tend to be. It allows the figure to stand among its brethren from any year of the line and look less out of place than, say, the V1 Stalker mold normally would.

The green used for most of the comic pack Joe figures is very green. It is deep, vibrant and not the type of thing that you'd likely see real military operatives wearing. But, for an action figure, it does work...in moderation. As such, when taken on his own, this Stalker is a great addition to any scene as the green color is still believable, but it is striking enough that it accentuates other colors on other figures. Unfortunately, since Hasbro cast pretty much all the comic pack Joes in this color, it tends to get somewhat stale if you have all the comic pack figures on display together. Fortunately, for me, I don't find many of the comic pack figures to be better than the originals. As such, you only see fleeting figures from the comic packs around my collection. Most are packed away since they didn't really offer anything that was a substantial enough upgrade over other, existing versions of the character.

In my collection, this figure has become my default Stalker. As a kid, I went on a hunt for a Stalker figure in 1985 so he could paired with my new Snake Eyes figure. Once I found one hidden in a Kroger store in Dayton, Ohio, I quickly gave him the brown version or Airborne's backpack from the Accessory Gear pack and a V1 Frostbite gun. With this, I had a figure that I used as Stalker from the Vietnam era. While my Joe team had progressed beyond that rendition of the figure, I liked the look so much that it became the way I viewed Stalker as a character. That permeates my collection today. Even though I'm fond of the '94 Stalker mold, I don't use that as Stalker. It is a new character. I used the '97 Stalker for a time, but this Vietnam era figure has replaced it as my default version. Given a V1 Frostbite gun, or left with the M-16, this figure fits the vision I've always had of the Stalker character. I see him as a younger soldier, full of promise: but not yet jaded by the politics of war.

In this role, Stalker remains more of a combatant in my collection. To remain true to the character who fought in Vietnam, Stalker would be pushing his 50's at the youngest. But, I can't put the character in that role. Instead, I see him as a younger soldier, though still hardened and still one of the toughest members of the Joe team. This figure allows me to retain that vision for the character and keep him relevant to my collection. Since I only have one version of him, though, I don't foresee him getting the use that some other versions might get. But, I do see this figure earning a place of prominence in a display case even while the Storm Shadow and Snake Eyes figures that were shipped with him remain tucked away in a box in the closet.

A funny thing happened on the way to this comic pack joining most of the rest of the comic packs as peg warmers. For some reason, this assortment of comic packs didn't saturate the market. Don't get me wrong, they were easy to find for a longer time than the Oktober Guard comic packs were. But, the market quickly absorbed both this Vietnam pack as well as the Devil's Due comic pack. This was the first wave of comic packs that was produced after the DTC experiment had failed and Toys R Us had stepped in to sell Joes at their retail stores. With the mountain of unsold comic packs from Wave 1 clogging the Hasbro warehouses, it is likely that this wave of comic packs saw a much lower production run. As such, this pack: still MOC, will run you about $30 or so today. The individual figures can be had for less, but it takes some time and patience to find them. It's likely that these Vietnam figures are as rare as the Oktober Guard figures. But, individually, they aren't quite as desirable as some of the OG. While I like this figure, I'd be hard pressed to drop $10 for one. There are too many other Stalker figures that are good enough for half that price. 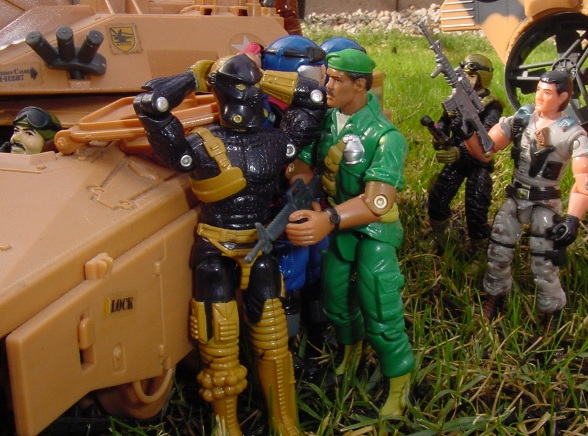 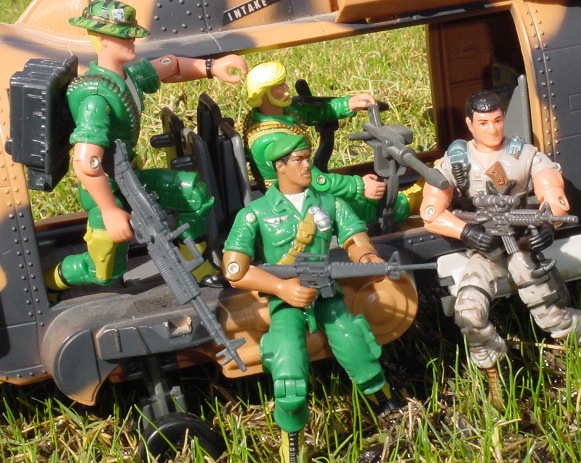 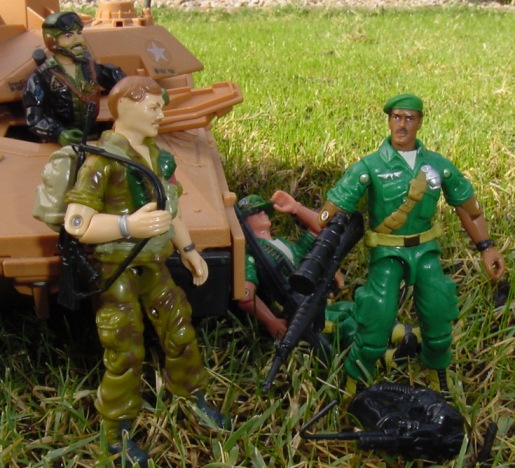 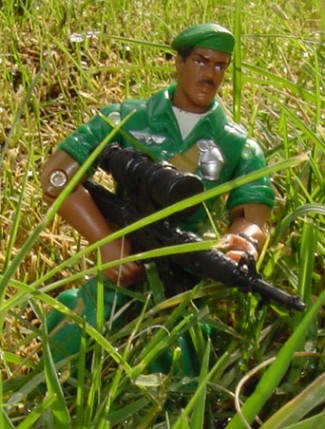 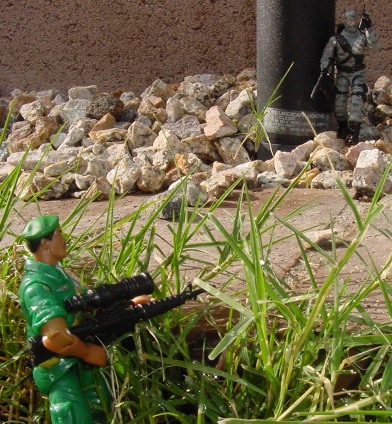 Posted by Robot_Sonic at 11:44 AM
Email ThisBlogThis!Share to TwitterShare to FacebookShare to Pinterest
Labels: 2006, Comic Pack, Stalker