Hasbro wasn't shy about trying out celebrity marketers for the Joe line. Sgt. Slaughter started it off in 1986. He was supposed to be followed by Rocky Balboa the next year. But, that never happened and, instead, the Fridge became the spokesman. The Sarge, though, seemed to take on a new life as the Joe marketer and he was rewarded with 4 figures in a short time span of the vintage run. His swan song came in 1989 when Hasbro produced an entire sub-team focused around Sgt. Slaughter: Slaughters Marauders. This group didn't seem to have much purpose besides wearing similar colors and selling more action figures for Hasbro. But, the gimmick worked as many of the Slaughters Marauders figures are well done. They are certainly different than their vintage counterparts and they offer some unique schemes into the modern collection. Of the characters included in this team, it was the Mutt mold that underwent the most drastic change and is the subject of this profile.

All of the Slaughters Marauders figures were actually manufactured and packaged in Brazil. The figures were made by Estrela under license from Hasbro for sale in the US. It is likely that Hasbro did this either as a cost cutting move, or simply because the molds for the figures they wanted to use were all located in Brazil and it was cheaper to have them produced there than it was to ship the molds to China. Since these figures are Estrela made, they are a great way for the modern collector to understand the differences between Brazilian made and Asian made Joe figures. All of the Slaughters Marauders are much more susceptible to crotch and thumb breakage since the plastic used in Brazil is harder and weaker than that used for the American and European Joes. You can see the effects of time on Slaughters Marauders figures as many of the samples you find today will feature broken parts...even when the rest of the figure is good condition.

As for the figure itself, Mutt is decently done. The deep blues and greens coupled with the black undertones makes for a visually impressive figure. While not in traditional colors, Mutt still works within the context of his specialty and within the line as a whole. I wouldn't go so far as to say that this figure is better or even as good as the original. But, it offers a different look for the Mutt character that still allows him to be used in realistic settings. In that regard, the Slaughter's Marauders subset of figures succeeds in a way that Tiger Force and Python Patrol did not. Those figures, while different and visually striking, were harder to use in more standard settings. While the Slaughter's Marauders figures are still very colorful, they can be more easily meshed with other, more traditional figures from the vintage line.

There is also an accessory change to this Mutt figure. Instead of the classic helmet from the original version, the Slaughters Marauders Mutt features a black version of the standard 1982/1983 helmet. It doesn't fit the figure's head as well and loses something over the more distinctive helmet of the original. The inclusion of this helmet is a mystery since the helmet mold subsequently appeared with the European exclusive Mutt figure. All of the rest of Mutt's accessories are the same classics as were included with the original figure: a leash, Junkyard, a silenced MAC-11 and a nightstick. The Slaughters Marauders versions of these accessories are visually different from those of the V1 Mutt. The most notable difference is that Junkyard is solid black and no longer has the brown belly of the original. The rest of the weapons feature more subtle differences, but you can see them when you compare the weapons side by side.

Mutt is a character of whom I'm somewhat fond. He had an interesting personality and his look was visually distinctive enough that he stood out in my mind for many years. As a child, my Mutt figure did not hold up well. As such, I never had the opportunity to use the figure as much as I would have liked. This carried into my modern collecting as now use various versions of Mutt more often than many of my childhood favorites. For the figure, though, he pretty much is what he is. The awesome accessories made Mutt for me. And, to this day, I feel that the complement of gear that accompanied the 1984 series of figures was as major a step towards Joe's success of '85 through '87 as was the leap from the '82 to '83 series of figures. These accessories showed what could be done with a toyline and allowed Joe to surpass its contemporary competitors and become the iconic toyline it remains today.

The Slaughter's Marauders subset did not seem to have much of a purpose. And, as a result, today, collectors don't pay it much attention. The figures are mostly side pieces of a collection and are almost never used as default or primary versions of their characters. The vehicles, though, are a different story. They were well done re-molds of popular vehicle bases and have become rather difficult to find these days for cheap prices. It is these pieces that often define Slaughter's Marauders to the modern collector. But, as a niche subset, these figures blend together better than their Tiger Force counterparts. Though, they are not nearly as numerous. Hasbro has yet to revisit the coloring of the Slaughter's Marauders figures. (Though, the unproduced Wal Mart Low Light from 2003 does feature the paint masks of the Slaughter's Marauders Low Light.) In the grand scheme of sub-sets, this one ranks lower on the collector radar. Perhaps it's the smaller nature of the set. Or, the relative infrequency that Slaughters Marauders figures appear. But, this is a solid subset of high quality figure molds that is fun to collect. (And, for you buffs out there, international exclusive Slaughter's Marauders figures were released in India and Europe. So, you don't need to stop with just the American figures if you want to chase the design.)

The Mutt mold was a world traveler. After it was used in the US, the mold was sent down to South America. There, Estela modified the mold by removing the patch on Mutt's chest. They then released the figure in colors similar to the V1 American Mutt to the Brazilian Market. The same figure with the modified chest also showed up in Mexico. When Estrela produced this figure on Hasbro's behalf in 1989, the signature patch was also missing. Sometime around 1990 or 1991, Estrela returned this mold to Hasbro where it was then used to create the European exclusive Mutt figure. After that, Hasbro claimed the mold was missing for many years. In 2004, Hasbro resculpted Mutt's head and chest for release in the Anti-Venom set. This time, though, Hasbro brought back the patch on Mutt's chest. Today, no version of Mutt has surpassed the original. And, while I wouldn't, necessarily, mind the return of this mold, I don't think it is a necessity since all of Mutt's original accessories were lost and any new figure would be missing his most trademark items.

When I took my Mutt out of storage to be photographed, I made a horrible discovery. When I touched Junkyard, the figure was slick. I have written previously about Brazilian soft plastics and their slow degradation over time. However, this is the first time I have experienced its occurrence after a figure was in my possession. I acquired this figure back in 2004. Since then, he has been stored in an acid-free plastic bag, inside a plastic tub, inside my house, in a dark closet. The figure has not been exposed to prolonged heat or light. When I first acquired the figure, the Junkyard was normal plastic and had no signs of decomposition. But, four years later, the dog is slick and Mutt's mask and Junkyard's leash are starting to soften quite a bit. It is an unfortunate side affect of the cheaper Brazilian plastic and something that is starting to occur on even figures that have been properly stored.

Mint and complete Slaughters Marauders figures are actually somewhat tough to find. The brittle plastic, short release period and general unpopularity of the figures during their own time has made them much harder to find than their counterparts from Tiger Force or Python Patrol. And, you will pay a premium for them. While Mutt is one of the cheaper and easier to find figures in mint condition, they still tend to hit in excess of $12 for mint and complete figures. If you throw in the tough to find filecard, the price heads up towards $15. Mutt is about middle of the road for Slaughters Marauders pricing as the Sarge and Spirit tend to be more expensive. BBQ is about the same price or a little cheaper. And Footloose can usually be had for a little less. All told the figures in the Slaughters Marauders set mesh well together and are a unique subset to collect. As individual figures, they are certainly not the originals, but are done in acceptable colors that allow them to be used outside their limited intended purpose. Even at a higher price point, they are figures that are well worth acquiring and certainly add an element of distinction to any Joe collection. 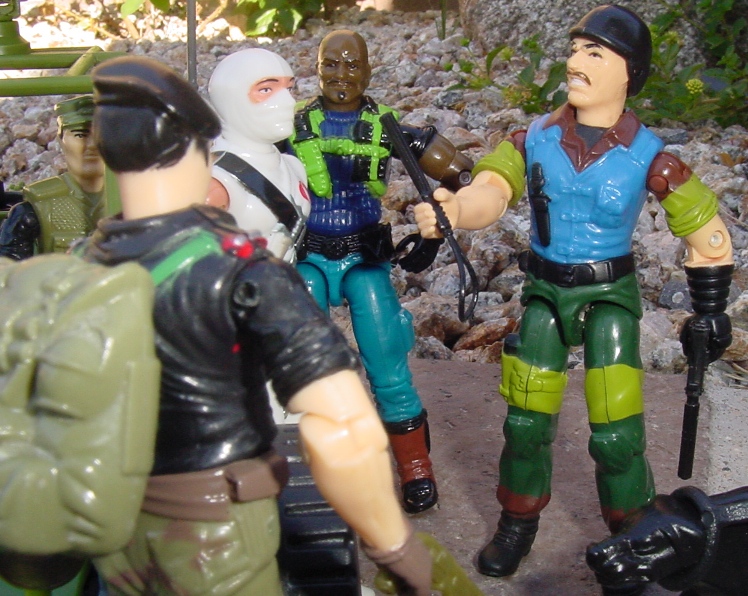 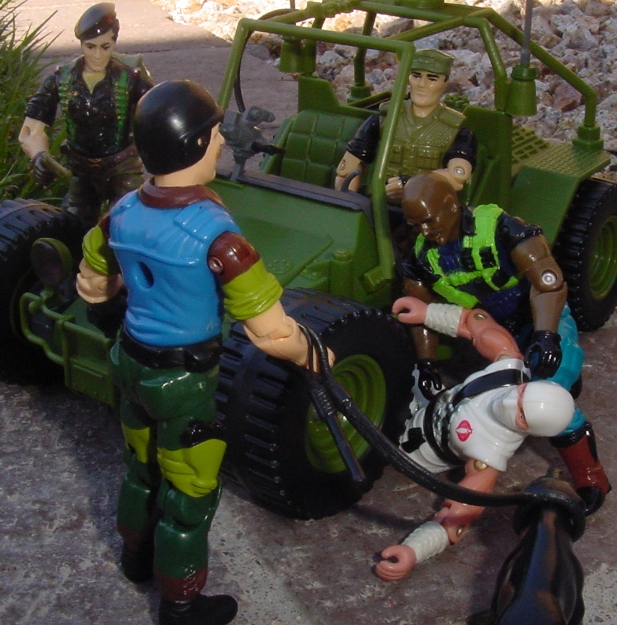 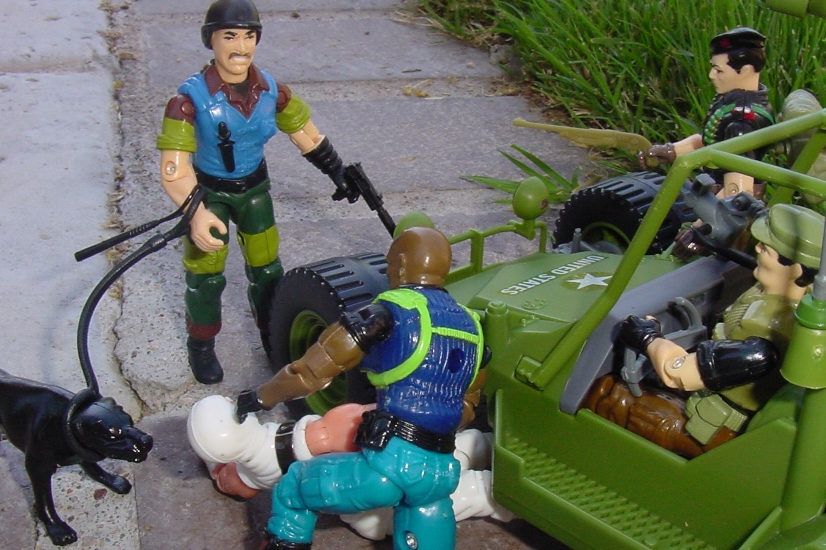 Posted by Robot_Sonic at 10:13 AM
Email ThisBlogThis!Share to TwitterShare to FacebookShare to Pinterest
Labels: 1989, Mutt, Slaughter's Marauders