Some time around 1984, the Palitoy toy company extended it's line of Action Force toys to incorporate a new style of action figure that was taking the US by storm. Gone were the 5 points of articulation figures that were compatible with vintage Star Wars toys and in came some recently used molds from the G.I. Joe line. These first figures were recolored to match the Action Force color pallette and given distinctive Action Force names. However, the G.I. Joe juggernaut was too strong and slowly but surely the Action Force line simply became the European brand of G.I. Joe. Among those early Joe figure mold repaints, though, are a slew of highly desirable unique figures. Most collectors would love to have Quarrel, Red Laser, Hunter or Blades as part of their collections. Also part of the Action Force line, though, was a figure that has caused great confusion among the collecting world in the years since its release. The figure is the Action Force Stalker who is actually a repaint of Snake Eyes. Confused? You're not alone. But, the result is an interesting figure who was once the best Snake Eyes mold available and is also the subject of this profile.

Basically, Stalker is nothing more than a V1 Snake Eyes figure with some dark grey highlights. Today, this is hardly anything worth writing about as we have plenty of V1 inspired Snake Eyes figures who are nicely detailed with many different paint colors. However, in the '90's, the only way to get a Snake Eyes figure that was anything other than solid black was this European exclusive. Even as Hasbro started putting out variations of the V1 Snake Eyes figure in 1997, this Action Force Stalker retained its allure. Collectors were not yet burned out on Snake Eyes and were always quick to welcome another version of the character's mold into their collections.

What to do with Stalker? This is a difficult question for the American collector since Snake Eyes is so ingrained in any USA-centric Joe mythos. It's hard to view this figure as a new character since Snake Eyes' design is so unique to him. It doesn't make any sense to have this figure be another version of the American Stalker character since that Stalker also has such an iconic look. Most collectors simply used this as yet another Snake Eyes figure. But, with so many better versions of Snake Eyes out there these days, even that leaves this figure as the odd man out. However, looking at this figure's Action Force roots show some potential. In the Action Force mythos, Stalker was an Icelandic madman who seems like an amped up amalgamation of Clutch. In the Action Force comics, Stalker was drawn without the mask at times and that look gives credence to an entirely new character. Unfortunately, the use of the Snake Eyes mold does not live up to it. But, it does open the door for this figure someday becoming something more in the modern Joe world.

Personally, I think that much could be done with the Action Force characters. A convention set featuring many molds painted up in Action Force green, SAS black and Red Shadows red would be among the most popular sets Master Collector could attempt. The Action Force villain line is full of great characters that would expand upon the existing Cobra hierarchy. They have their own army builders in Red Shadows that would easily be made from existing molds and new heads. On the Action Force side, a character like Stalker could be brought to life with a new interpretation and could be made relevant to all collectors with a new mold. The rest of the Action Force characters could undergo the same process. On top of that, some standard Joes who were big players in the Action Force comic (Flint comes to mind...) could be redone in Action Force green: which would actually be a welcome repaint for even the most overused molds. At this point, there isn't much left for Master Collector to do in terms of a high profile convention set. However, Action Force would probably be the one theme that would energize collectordom en masse.

Stalker was included with the Action Force Panther jeep. It was a black and yellow repaint of the American VAMP. The figure included the same accessories as the V1 Snake Eyes figure. Savvy collectors also know, though, that Stalker was available as a bagged premium figure at one of the early G.I. Joe conventions in the '90's. It seems that Hasbro got ahold of a large quantity of Palitoy overstock. So, they bagged up spare Quarrels, Blades and Stalkers, gave them accessories that were in production at the time, and bagged them as exclusives for convention attendees. These are the same figures as the vintage Action Force models but have become slightly more collectible in recent years since they do feature the convention exclusive moniker.

This brings up an interesting point about most of the Action Force exclusive toys. When Hasbro acquired Palitoy, they also acquired all of the old overstock that Palitoy had on hand. This included tons of Action Force figures still sealed on their original bubbles. Some of these were used for things like the convention premium figures. But, a lot of the overstock was slowly sold off to European (usually UK based) toy dealers in the late '90's. These days, you see collectors paying through the nose for figures like Gaucho and Jammer. Yet, just a few short years ago, these figures were available in multitudes from UK toy dealers. Yes, that stock has dried up. But, many collectors mistakenly think that the Action Force exclusives were only available with their vehicles. That isn't the case as many American collectors were able to acquire carded Action Force figures at the turn of the century from these overstock dealers. As such, many of these Action Force figures are more common than newer collectors are sometimes lead to believe.

Simply put, the V1 Snake Eyes mold was one of the most popular in the entire world. Aside from being used in the US, the mold was repainted in unique color schemes in Argentina, Brazil, Europe, Mexico and India. Snake Eyes parts were used to create Cobras in both Argentina and Brazil. And, Snake Eyes was the original figure included with the Funskool exclusive Street Hawk toy. After the mold was returned to Hasbro in 1997, it has been used a number of times to create newly updated and detailed versions of Snake Eyes. At this point,the mold is exhausted and there are really only a few things that could be done to it to make it relevant to collectors once again. If we never see this figure mold again, it will probably be too soon.

This figure was once one of the more desirable European Action Force exclusives. However, as Hasbro began to release more and more figures based on the V1 Snake Eyes mold, the need for this figure was diminshed. At one time, this was the only way to get a V1 Snake Eyes that wasn't all black. These days, collectors have almost a dozen different versions of Snake Eyes that are based on the V1 mold and most of them feature more intricate paint masks than Stalker displays. As such, Stalker is no longer the featured collectible he was once. While some Action Force figures have gotten ridiculously expensive in recent years, Stalker has remained affordable and can often be purchased for about the same price you'd pay for a Snake Eyes figure. That's pretty cheap considering that Stalker is probably rarer than the American figure. Personally, I like having figures like this in my collection. But, for many collectors, the enjoyment they would get out of this mold will vary. It is no longer a figure that is required in order to have a slightly better Snake Eyes and that really makes him a figure that cash strapped collectors can probably skip. 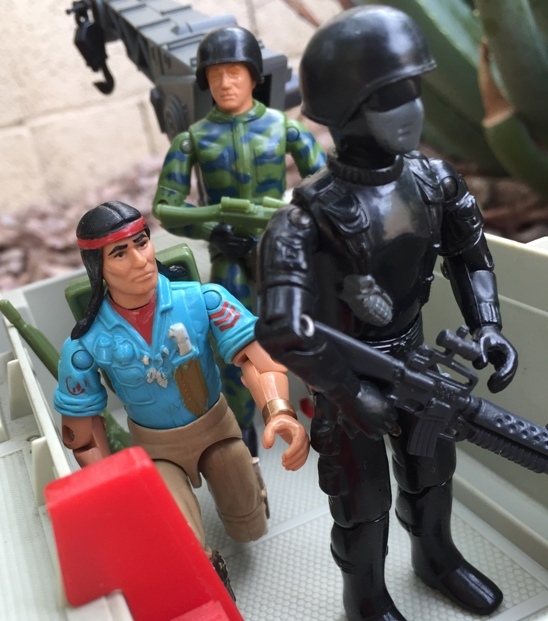 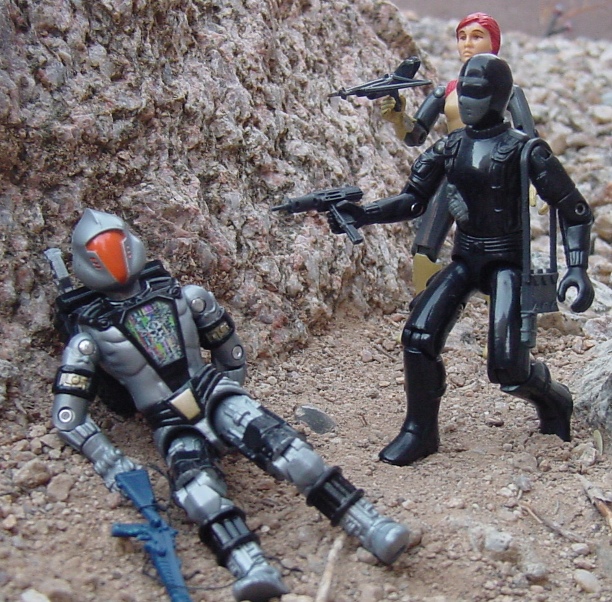 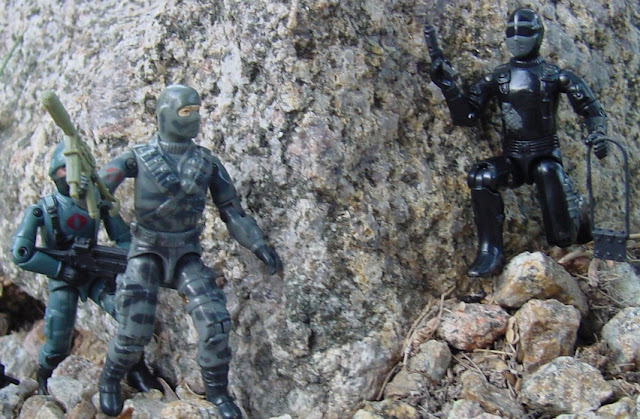 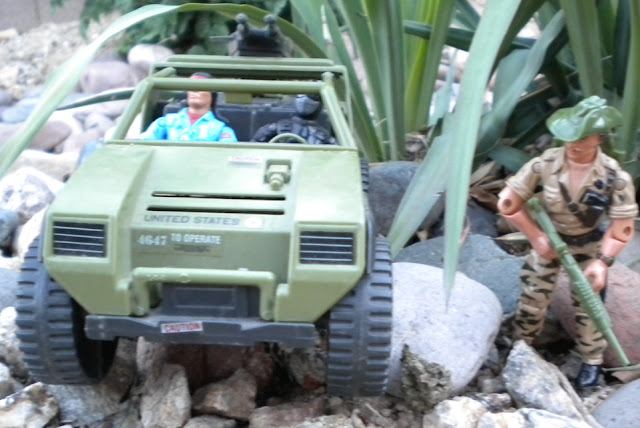 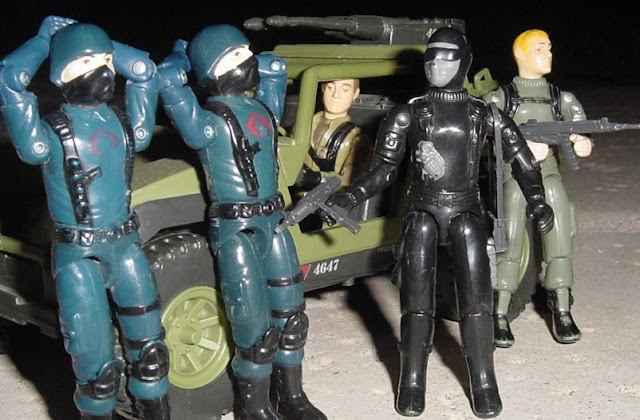 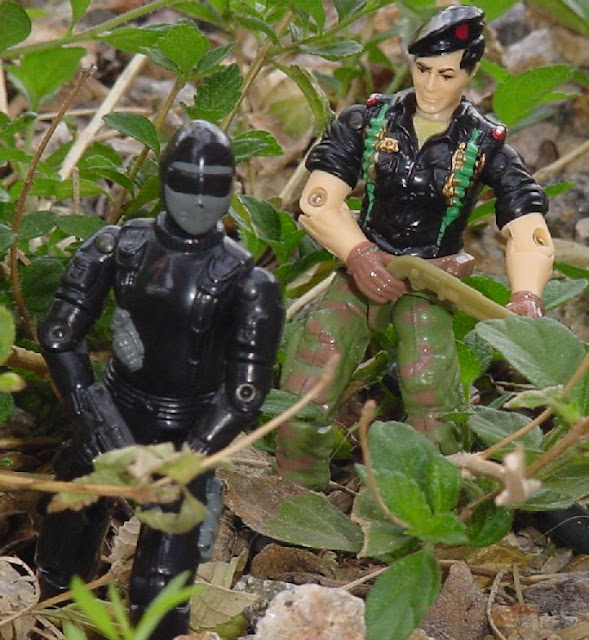