In the first half of the vintage line, repaints were relatively rare.  For the most part, Hasbro released new figures every year.  There were a few sparse examples here and there.  But, the line remained relatively unique for a long time.  As the '80's wound down, though, Hasbro discovered that repainting some older molds was a good way to expand the line without creating new molds.  It also was a way to keep some higher profile characters in the rotation at retail.  Rather than simply repaint a figure and insert it into the line, though, Hasbro came up with the notion of sub teams and themes as a means to pump repaints into the marketplace.  The results were surprisingly strong.  Night Force, Tiger Force, Mission to Brazil and the subject of this profile, Python Patrol are all figure subsets that are highly regarded by collectors today.  The Python Patrol Officer is no exception...even if he was the victim a misunderstanding.

First off, while this figure is named the Python Patrol Officer, the mold is the classic Cobra Trooper.  The Cobra Officer mold was also released in Python Patrol as the Python Trooper.  It is a classic mix-up that causes confusion to this day.  As a kid, I always felt the Cobra Trooper would be the more elite of the Cobras since he had the more detailed uniform and the more specialized weapon.  But, since I like the Trooper mold much more than I do the Officer, this is something I got over as I wanted to have many more Troopers in my collection than I did the Officers.

The Cobra Trooper mold is one of my favorites in the entire line.  If my entire collection was reduced to 5 figures, a vintage Cobra Trooper would be one of those select keepers.  The figure follows the design of the original Joes with the web gear on the chest.  But, in lieu of a molded knife, the figure has a machine pistol.  The mold is covered in minor details, down to the piano wire on the arm.  Unfortunately, the Python Officer does not take full advantage of these details as many are unpainted.  These repaints were meant to be cheap to produce and the cammo likely ate up much of the budget.  But, since the figure's base is black, you can somewhat forgive the missing paint applications.

Python Patrol has retained some popularity among the collecting world.  The reality is that of the original figures, the Crimson Guard and Tele-Viper are not good.  The Officer, Trooper and Viper, though, are extremely well done.  The green, grey and black combination actually looks like something that Cobra could use.  They could be night fighters, forest patrols or jungle recon units.  Mixing them with the Python vehicles is a bit more difficult.  But, Python Troopers and Officers are a perfect match for the SEARS exclusive Dreadnok Stinger and RAM.  The green meshes well with the figures' coloring and is a nice companion piece to any Python Patrol display.

I never really liked the story behind Python Patrol.  But, it did give us some nice figures.  I have found these Python Officers to be a great addition to a Cobra army since they are something a little different, but hearken back to the original blues.  In that regard, I have found a use for them.  Having the Brazilian exclusive Gatilho and Relampago figures helps, though.  These figures mesh well with the Python Officers and give the foreign characters a similarly clad army at their disposal.  They are a more specialized unit, but I see them as more of a forest/jungle patrol on Cobra Island than any other, specific, combat duty.  It is a somewhat limited role, but does work with the figures since they stand out when displayed with non Python Patrol Cobras.

The Cobra Trooper mold was used all over the world.  The straight arm figure was released in the US, Brazil and Argentina.  Hasbro produced the swivel arm version for the US, Europe and Japan.  The swivel arm figure then showed up in Brazil where it was released by Estrela as Vibora in colors very similar to the Python Officer.  In 2004, Hasbro resculpted the Troopers chest and legs for release in the Cobra Infantry set.  But, later that year, they found the original mold and used the chest and head for the comic pack Trooper and again in 2005 as the body for the Night Watch Troopers.  Unfortunately, Hasbro did not properly capitalize on the mold's popularity and left several obvious repaints unproduced.  Enterprising bootleggers have filled this gap and produced Troopers in all colors of the rainbow.  It would have been great for Hasbro to better utilize these molds.  But, they didn't.  At least we can enjoy the figures that were released.

In the mid to late '90's, subsets like Python Patrol and Tiger Force were considered scarcer than the figures from whom the members were repainted.  In those days, you were likely to pay more for a Tiger Force or Python Patrol figure than you were for the original.  As the collecting world moved online, though, inequities like these were ironed out.  Slowly, the original figures became more desirable and expensive while the repaints fell in price.  But, as the '00's wound down, those early perceptions were proved at least somewhat correct.  Python Patrol and Tiger Force were only released in one production year in lieu of the standard two.  So, they are scarcer than the original figures.  Today, it is much harder to find a mint, complete Python Officer than it is a mint, complete Cobra Trooper.  But, the reality is that the popularity of the originals still trumps the repaints.  So, despite being harder to find, Python Officers can be purchased for $11-$14.  Getting an army of them may take some time, but they aren't as expensive as they once were.  For what this figure offers, it's a pretty good price. 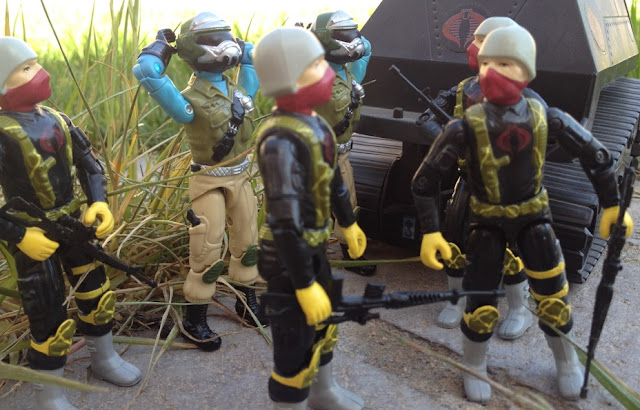 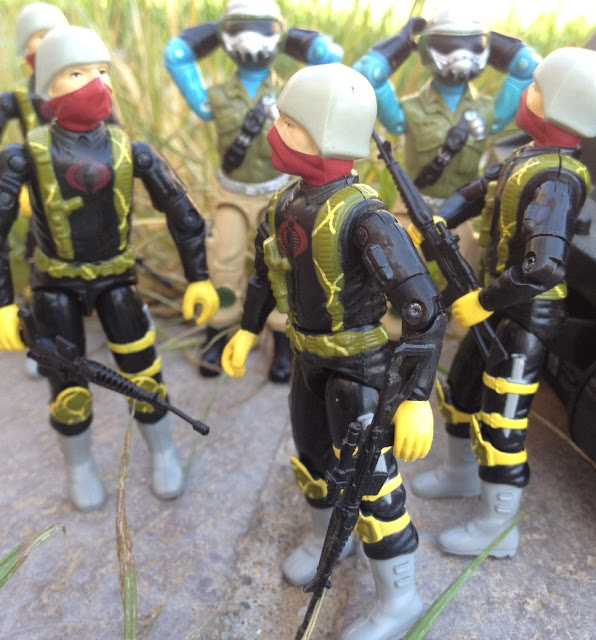