One of the great things about the vintage G.I. Joe line was that Hasbro offered small, supplemental play items that were designed to be used with the standard figures and vehicles.  Some of these, like the small battlefield playsets, were retail offerings.  Others, like the 1985 Parachute Pack were exclusively offered via mail away through Hasbro Direct.  As a retail item, the Parachute Pack is rather dull.  But, as a cheap mail away item, the parachute is a remarkably fun toy that adds a whole new layer of play to Joe figures.

The Parachute Pack is stuck in a great collecting dichotomy.  As a toy, it is fun and exciting.  The pack fits into the hole on the backs of figure and includes a belt shoulder strap that provides an extra layer of protection to keep the figure from separating from the pack when thrown into the air.  It was a great way to add a sense of realism to the toyline.  But, as a visual item, the pack is less awesome.  It is large, bulky and unwieldy.  It looks out of place on a figure and will not fit into any vehicles.  So, you either had to have the figures wearing the packs stand on the skids of the Dragonfly.  Or, have them in the aircraft, take them out, affix the pack and then have the simulated parachute drop.  The engineering that made the pack possible is quite impressive.  But, it is somewhat difficult to play with outside of specific scenarios.  So, that may explain the lack of popularity since kids likely grew bored with it rather quickly.

The Parachute Pack was not overly complex in terms of the parts.  The pack itself is a hard shell of green plastic.  There is a thin edge in between the two sides that allows the sides to close together.  At the top is a pliable plastic peg that holds the pack together.  The parachute itself is the same plastic sheet material that was first seen in the Skystriker.  This version, though, is camouflaged.  The back includes a belt strap that provides an additional attachment point to the figure as it goes over the figure's shoulders and attaches into two slots on top of the pack.  The best part of the belt strap, though, is there is a small hole on the side into which a replica of the 1984 Ripcord's air mask will plug.  The pack also includes a version of Ripcord's helmet.  (There is a definite feeling that this pack was mostly intended to be an additional play item for Ripcord.)

As a kid, I loved the notion of parachutes.  My younger brother received a Fisher Price Adventure People parachute pack for his birthday in 1982.  This also happened to be the birthday where he got tons and tons of G.I. Joe toys.  Even though the Fisher Price parachute was rainbow colored, it was quickly integrated into the Joe play patterns.  The Adventure People chute was actually cloth material with heavy plastic straps affixed to it.  It gave the overall package more weight and allowed it to be thrown higher into the air.  The cloth parachute worked remarkably well and the figures were securely strapped into the harness.  In short, it was a great toy.  When Ripcord entered my collection in 1984, I would often have him bail out of the Skystriker and have the Fisher Price parachute become part of his survival gear on the ground.  He would use it as shelter, a blanket or a diversion.

I wanted a real, G.I. Joe parachute.  The closest thing was the seat back chutes in the Skystriker.  These were plastic and didn't work nearly as well as the Fisher Price item.  As such, I never pursued the mail away Parachute Packs.  I had another parachute that worked just fine.  When my youngest brother got the Target Hit and Run figure that included the Parachute, my apprehensions were confirmed.  While the idea of a working parachute was cool.  The execution was less so.  The bulky pack was awkward.  It took away from the figure due to the sheer size.  But, the play value remained.  My parents' home was a two story with a banister overlooking the stairs.  It was a perfect drop for parachutes onto the stairs below.  So, more than once, that Hit and Run was dropped over them.  But, that was about the extent that the G.I. Joe parachutes saw any use.

The parachute pack was first available in 1985 and continued to be available from Hasbro Direct through at least 1989.  In 1988, Hasbro packaged it with the Target exclusive Hit and Run figure, though they did not include the air mask or helmet.  The same pack, but in a very slightly different shade of green, was available in 1994 with both the individually boxed and 30th Anniversary Set Action Pilot.  Various other figures included different versions of the pack, including the Paratrooper Guile figure and the members of the Sky Patrol set.  There is a variant on the Parachute Pack.  One has a Made in China stamp and the other has a Made in Hong Kong stamp.  The packs have slightly different coloring based on the production stamp.  I don't know if one is rarer than the other or if one is exclusive to Hit and Run.  The later Parachute Packs had the production stamps removed altogether.  So, it's something to be on the lookout for.

Mint and complete with blueprints parachute packs can be purchased for between $7 and $10.  If you don't want the blueprints, you can get complete packs for around $5 with relative ease.  The widespread availability of the pack and general disinterest from collectors have left the parachute as an obscure mail away exclusive.  It's amazing to see the disparity between items like this parachute pack and the MANTA versus the mail away exclusive figures like Starduster or the Steel Brigade.  While those figures are extremely popular and rather expensive, their vehicular counterparts are cheap and plentiful.  It's possible that the pricing difference is a function of greater production of the vehicles.  But, I doubt that's the entire reason.  There's just more interest in figures and many collectors simply disregard these mail away add ons entirely.  That's not a bad thing, though, since it allows the modern collector to acquire as many of these Parachute Packs as they want without too much hassle or expense.  They are a fun addition to a collection and very worthy part of Joe lore. 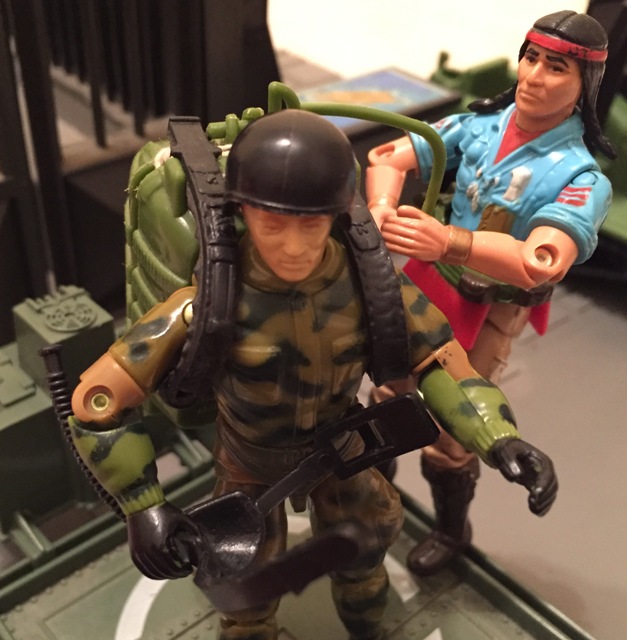 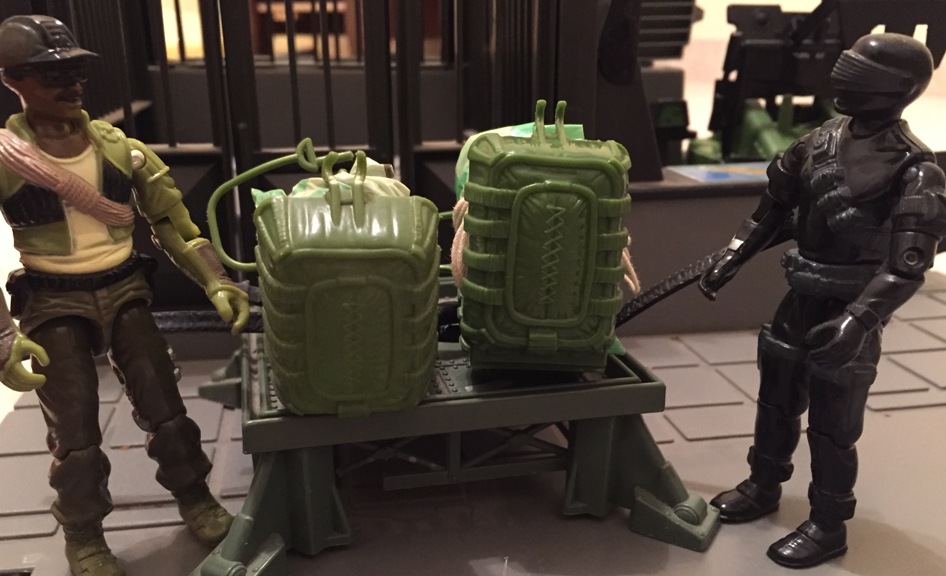 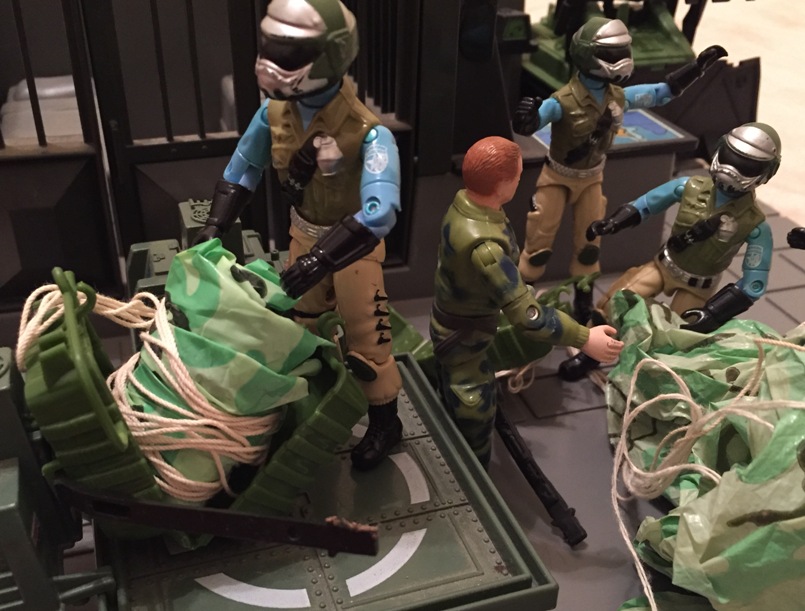 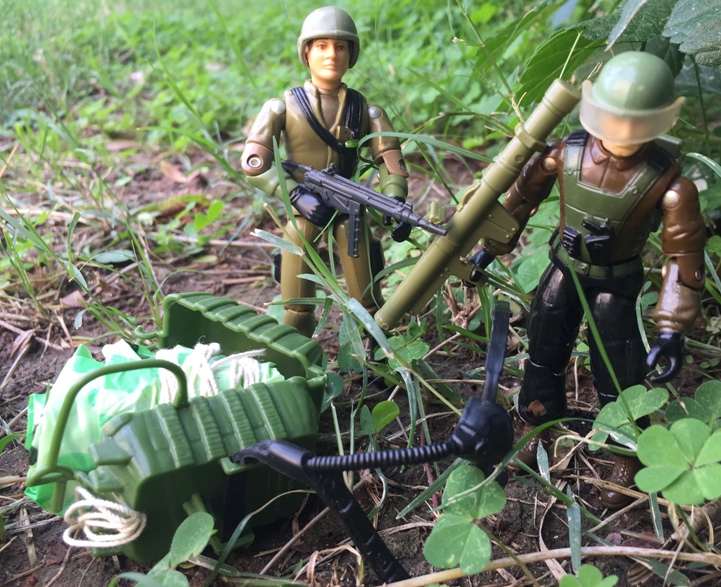 Posted by Robot_Sonic at 5:30 AM
Email ThisBlogThis!Share to TwitterShare to FacebookShare to Pinterest
Labels: 1985, Mail Away, Parachute Pack, Vehicles