Many of the stories I've written in the past few months have heavily focused on the later years of the Joe line.  The reasons for that are heavily based on the nostalgic factor from that time period.  While not the innocence of childhood, that time in my life was full of the anticipation of the road ahead while also enjoying the moment to the fullest.  Recalling those tales from that period of my existence is fun and has been a good way of further documenting some of the events of 20 plus years ago before they become murky from time.  The 1993 Bazooka, though, does not hearken back to those days.  Truthfully, I have no recollection of ever seeing the figure on the shelves.  While the green weapons would have been a reason to skip him, the relatively solid mold and familiar character would have made him an acquisition target had he been available.  But, this figure did not enter my collection until either 1999 or 2000, when I was firmly buying older collections rather than scrounging retail for the last scraps of the line.

As a mold, the '93 Bazooka is pretty solid.  While the waist and legs are repainted from the 1990 Bullhorn figure, the head, chest and arms are original.  The Bullhorn legs are a decent mold and not overused.  They are in scale with the new parts and create a figure that fits together well.  The arms are fairly non-descript, save for the string of grenades around his left wrist.  Practically, these are inane.  These would be so heavy that Bazooka would be hard pressed to even move his arm: much less use it effectively.  But, as a look, they are different and interesting.  The torso is also well done.  The vest features a pistol and holster and....some fishing gear.  Yes, fishing gear.  It seems that this Bazooka will take a few hours to fish while waiting for Cobras to stroll on by.  Again, it's somewhat ridiculous.  But, the sculpted details are not overly obnoxious and could be construed as standard, military gear.

The figure's color scheme, though, doesn't live up to the sculpt.  A red shirt, tan vest and blue/green pants are an odd combo.  As a standard Joe, this isn't a uniform you would want to see.  But, if you expand the definition of Joe to incorporate more of the Adventure Team motif, this figure starts to work.  The colors are more acceptable when taken in the context of a civilian adventurer who, while out fishing, could also scare up a cache of deadly terrorists.  Sure, it's different.  But, it gives figures like this more solid footing in the Joe mythos and helps to validate some of the odd color choices that dominated the early 1990's.

To say the filecards from 1993 and 1994 were bad is an understatement.  Rather than have them be the defining character profiles that hallmarked the early years of the line, the later filecards dropped to promoting the sculpted features of the figure and cross-selling other Joe toys.  Bazooka is highlighted for wearing a vest, splats, boots and pants.  Really, his filecard points these features out as selling points for the character.  Sure, the grenade ring, spring loaded launcher and machine gun are included.  But, 4 of the most interesting things about this figure are the clothes he wears.  On top of that, Bazooka's specialty is listed as Blockbuster Driver.  While the heavy armor operator fits with the established skillset of Bazooka (as a kid, the 1985 Bazooka was second fiddle in my Mauler for years due to his filecard listing tank operator as a specialty), this figure is hardly a match for the arctic themed Blockbuster.  Especially when 1993 saw release of both and Iceberg and a Snow Storm figure that would have, at least, matched the environmentally specific design of the Blockbuster.

For me, the figure's use is mostly filler.  I wave never a big Bazooka fan.  He is the 1985 character I most often overlook.  The true value of this figure lies in the customizing potential.  His head was a staple for early customizers who sought to create renditions of the unreleased 1995 Battle Corps Rangers Footloose figure.  The rest of his parts are quite useful as well.  I've mostly found this figure filling the position of equipment operator in various vehicles through the lifespan of this site.  He can take that role so that a better figure isn't relegated to being mostly obscured by the vehicle's cockpit.  I don't really see that changing.  But, Bazooka at least has some value in the regard since he's a recognizable character.

Like most figures sculpted in 1993 and 1994, Bazooka would greatly benefit from a modern repaint.  The mold is solid and could be used to create an excellent figure.  But, that never happened.  The mold was not even repainted or re-released in 1994.  So, there is but this one version.  The 1993 figures who were never repainted mostly showed up in Brazil.  As such, it's possible that this mold was given to Estrela.  But, they could not find a way to release it.  If that were the case, though, it's also likely that Hasbro got the mold back.  The later Brazilian figures who were found indicate the likelihood of Hasbro having all the molds back.  But, who was going to spend time searching for this figure?  While it would have made a great repaint, the reality is that Bazooka was not a hugely requested character.  Nor was this mold overly popular.  Hasbro repainted a few '93 and '94 molds in the 2000's.  But, collectors mostly met those with a yawn.  So, there was no incentive for anyone to spend time looking for figures like this Bazooka.  And, we as a collecting community are worse off for it.

Like most of the 1993 Battle Corps figures, Bazooka is super cheap.  Even carded, he can be had for under $10.  The late release year, odd color scheme and widespread clearance of the line lead to a surplus of carded 1993 Battle Corps figures.  So, they are easy to find and priced in line with their availability.  So, there is no reason for any collector to not have one.  As Bazooka, the figure works.  But, the colors are odd and don't really mesh with much from the line.  So, it's hard to see him as a main player in any collection.  The original Bazooka figure isn't great.  But, it's 1985 release year tends to cause collectors to give it a pass.  This 1993 version is a worthy successor and can be a fun part of a collection.  You just have to give it a chance and use a little creativity. 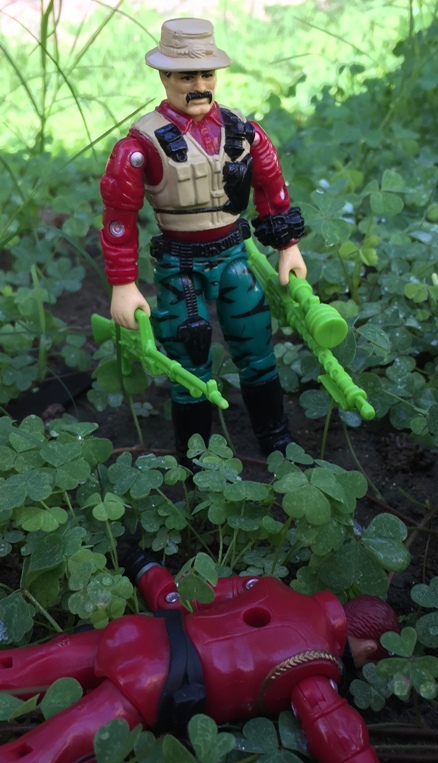 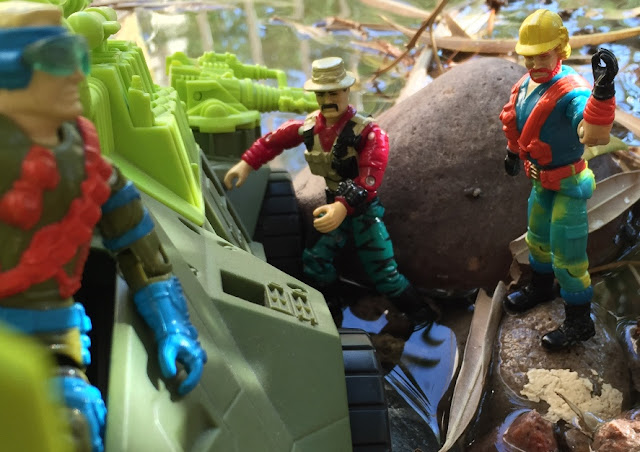 Posted by Robot_Sonic at 5:30 AM
Email ThisBlogThis!Share to TwitterShare to FacebookShare to Pinterest
Labels: 1993, Battle Corps, Bazooka