1994 was a Joe year. 1995 was split evenly between Star Wars and Joe. 1996-1998 were Star Wars years. 1999 was a Joe year. I had anticipated 2000 being a Joe year as well, but a few things happened. First, Joe prices started rising. You may have noticed some of the rants I've posted about how figures are overpriced. It appears that Joes are hot right now. Unfortunately, for a toy line to remain hot, it must be something that is completable and must have a holy grail or two. The Joe line has neither. With well over 500 unique figures in the line, completing the set is a daunting task, especially for the casual collector who gravitates towards what it popular right now. There also is no particular year or figure that stands out as the hardest to get. Sure, a few variations of the Steel Brigade or Starduster figures are pretty tough, but they are not popular enough characters to carry the burden of an entire Joe renaissance.

The second thing that happened this year has been the awesome clearance sales on tons of Star Wars merchandise. Much of the product that never made it to retail in 1998 and early 1999 has finally surfaced, and it is dirt cheap. I've doubled my already substantial Stormtrooper army in only a few weeks. Awesome Star Wars figures are available everywhere, and they are on sale. As Joes have risen to the point where it is simply not economical to build armies, I've turned my focus to a line where that is feasible right now. Many Star Wars collectors hark back to 1985 when stores were clearing their Star Wars racks at 2 for $1.00 prices. They tore them down to put up Joes. I think these clearance sales are the beginning of the end. Star Wars has had a nice 5 year run, but Hasbro has basically killed most fan interest. As to what will replace Star Wars, I have no idea. A rebirth of 3 3/4" Joes would be what we all hope for, but I am not holding my breath. Perhaps another company will pick up the slack and cash in on the post Star Wars doldrums like Hasbro did back in the '80's.

The reason I selected this figure to profile is that he is my favorite figure in the new Star Wars line. It is a figure that had about 7 seconds of screen time, but is a nice mold of a major character. This is the outfit I always wanted Luke to have. It is the only outfit in the entire Trilogy that makes him look like the dashing young hero he has turned into. Many hard core fans will recognize this uniform as the one Luke wears in his appearance in the infamous Star Wars Holiday Special that aired one time back in the '70's. Luke appeared in a cartoon that introduced us to Boba Fett. It is, as far as I can tell, the only appearance of Luke where he is more a pilot and kid and less a budding Jedi. The other reason I like this figure is because it allows you to use Luke outside of the traditional movie settings. All the other versions of this figure have him in basic outfits he wore throughout the movies. It's hard to use your imagination with a figure that is so limiting. This figure has a basic pose that allows for great play value. Had Hasbro made more figures like this and fewer like the pre-posed Cantina Han figure from late 1999, the line would have found tremendous following among children, as well as adult collectors.


When they first came out, these guys were tough to find. The Freeze Frame version was even tougher. That is, until the last couple of months when all the backstock turned up at Toys R. Us's around the country. Now, this guy is all over the place. Of course, I've picked up a carded version of him. I like the figure enough to have a couple. (It is also important to note that every Star Wars figure produced in the '90's probably has more carded versions of him stashed away in some hoarder's attic that there are opened verions. As such, none of this stuff will ever have any monetary value. If you want an investment, buy stocks. The only returns these figures will bring you is personal joy. If you like having them around, then buy them. If you think they will pay off the mortgage, then I've got this bridge in Arizona to sell you....)This guy also makes great custom fodder for Rebel Fleet Troopers and Cantina aliens. Joe customizers do a good job, but Star Wars customizers take the cake. Many of the top Star Wars customizers create pieces that rival what Hasbro could produce. (Check out Rebelscum.com and find the customizers link. Once there, you will find an Imperial Gunner Station made out of old G.I. Joe vehicles that is absolutely amazing.) Enought about this figure, though. I've used this as a catharsis to cure my Star Wars wanderlust and will now refocus on Joes. 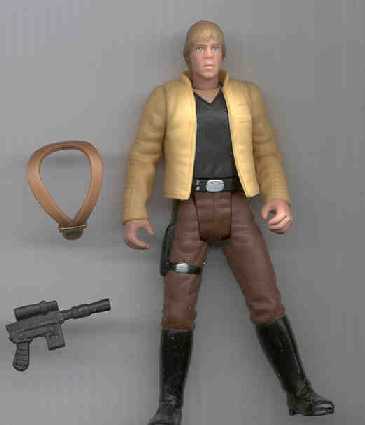