This guy should be a laugher. I mean, he is cast in pastels and looks like he's drunk. Oddly, though, it was my hate for this guy that has made him one of the most oft used figures in my collection. In the late '80's, I thought the whole Hawaiian shirt and Jams craze was ridiculous. I hated Chuckles and refused to use him. I made my youngest brother get him, though, as I wanted to have his holster and pistol. As it turned out, he ended up with two of them. I never used the figure, and relegated him to the bottom of my toybox. One day, though, I was looking for a figure that could act as a civilian. The Joes were walking out of a building and I wanted someone who could sneak up on them and open fire in broad daylight. Chuckles immediately came to mind. The Joes came down the steps, Chuckles pulled an uzi, opened figure, jumped into the sliding door of the A-Team van, and immediately became an integral part of my collection.

Chuckles rose to one of my favorite figures. I could use him as either a good or bad guy. He was the perfect figure to act as a tourist and mess with either Joe or Cobra's plans. I used him as the leader of an alternate terrorist group, or as a lone gunman who the Joes had to track down. The figure I hated, became one of the figures that went everywhere with me. He was so versatile that he was usuable in just about any scenario I could come up with. His initial appearance in G.I. Joe #60 was also very cool. When I saw some of this guy's other potential, the figure just became more interesting to me. Naturally, I was very glad to have 2 of the figures and used both of them to near destruction.

As time progressed, though, my Joe adventures returned to their military roots. Cobra became more of a military threat than terrorist. Chuckles, therefore, fell out of favor. I put the figures away and didn't see them for several years. In the mid nineties, though, I returned to Joe collecting in a big way. Since I had been gone, I explained that Cobra had been gone as well. Many of the Cobra higher ups were languishing in prisons. The proper way for Cobra to return, then, was to have them free their shackled brethren. While I had the prison breakers, I needed a figure that would work for a prisoner. These guys had been in jail for several years. They wouldn't still be wearing their Cobra togs. I needed a figure that was bland, but had an outfit that looked like the blue prison garb you see in all the movies. Once again, I turned to Chuckles.

Chuckles is the perfect prisoner figure. The pastel shirt is pretty close to prison blue and his legs are pretty barren. (Except for that knife, but I pretend it's not there.) The drunk look on his face could also be taken as sadness for a life lost to a long prison term. I had a new use for both my Chuckles figures. As Cobra began to succeed in a few of these missions, I had the Joes come out of retirement and start guarding larger contingents of Cobras who were all being moved to a central facility to keep them from recruiting. I needed more Chuckles figures. Now, I have 9 of them. Of course, they look really cool all chained together at the legs. (Just a note, twist ties, the plastic coated kind, make for good handcuffs and leg shackles. They don't look real, but they do hold the figure in realistic ways. They are all I use.) I usually put them all in my APC and have a contingent of guards, made up of 1987 Laws and 1993 Maces keeping them in line. I have a couple jeeps circling the main transport as well as a couple of bad guy jeeps and attack vehicles ready to pounce. Fun just ensues.

The Chuckles mold was used by Hasbro for this figure. From there, it went on India where Funskool released it for many years. However, Funskool stopped production on Chuckles around the time when they first returned molds to Hasbro in 1997. As such, it is highly possible that the Chuckles mold is available to Hasbro. But, in 2007, Master Collector wanted to release a Chuckles figure. They could not find the mold so they had a new Chuckles head cast. It is likely, though, that the search for the Chuckles mold wasn't as thorough as it could have been. But, it is also likely that Hasbro misplaced many of the molds that they used in '97 since they have confirmed the loss of the '86 Hawk mold that was just used a few years ago.

Regardless, I could stand for a new Chuckles figure since Master Collector basically remade the very common and easy to find original figure in terms of colors and look. They took no chances on the figure and gave collectors a boring copy of something that was already abundantly available. At least that figure is languishing in warehouses as collectors didn't respond to this lack of originality on Master Collector's part.
Chuckles figures are not hard to find. They are also pretty cheap. Most people don't like the figure, and certainly don't collect him in multiples like I do. His accessories, though, can be troublesome. His pistol is one of the smallest ever issued and was easily lost. The holster was such a cool accessory that it was often heavily used and is now found with some rips on the buckle or actual holster. Still, finding him mint and complete won't take you too long, nor break your budget. Chuckles were produced in abundance at the height of Joes' popularity. He is a fun figure, though, and is one that I wouldn't consider my collection complete without.

I like Chuckles, but have 9 or them. What is his use in your collection? Let me know. 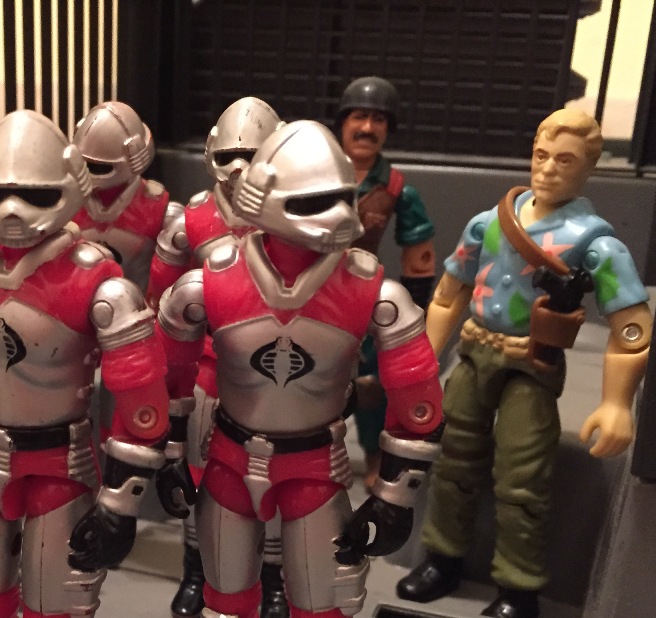 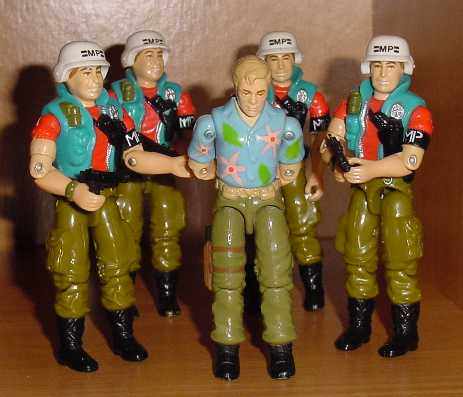 Posted by Robot_Sonic at 2:00 AM
Email ThisBlogThis!Share to TwitterShare to FacebookShare to Pinterest
Labels: 1987, Chuckles