Back in my profile of Carcass I told of how this site's humble beginnings were heavily based on the promotion of Star Brigade figures. I've said many, many times how I really like astronaut figures. All of the regular Joes who were released as astronauts, though, were kept modern in design. They were more science fiction in appearance, though they all had their basis in some form or reality. For a unit like Joe, this was perfect. They were an ultra modern fighting force that would have utilized the latest technology. However, 1994 Hasbro decided to pay an homage back to G.I. Joe's 12 inch tall roots. They released four commemorative boxed individual figure sets of a Soldier, Marine, Sailor, and Pilot. All of these 3 3/4 inch figures were based on classic era military designs. As a special bonus, Hasbro also released a 5 figure boxed set. This contained the same 4 figures, though the sailor and pilot were recolored, as well as an exclusive figure that was not available by himself. The Action Astronaut was that extra figure and is a guy that I think deserves some notoriety.

As a figure and compared to the other 1994 Star Brigade figures, the Action Astronaut is very bland. He has no expression on his face, and the mold lacks any great detail. Of the 5 30th Anniversary figures, I would say that he is most mundane. However, he is supposed to be that way. The early astronauts did not have the modern trappings of his contemporary figures. Also, he is not a combat astronaut, he is a scientist, explorer, and adventurer. When viewed in his historical context, this figure is very well done. The simple helmet with face shield and the small control box on his chest are all the extra molding and accessories he has. They make the figure seem like an astronaut from the space program's early days. In this capacity, he succeeds marvelously.

This figure has some other small significance to the Joe line. It seems, back in '94, Hasbro was going to release this figure along with a full sized Mercury rocket. The rocket would have been very tall, and very detailed. It was going to be a supplemental to the 30th Anniversary set. However, high costs of production kept the rocket from ever becoming reality. Instead, this figure was released, along with his space capsule, in a boxed set with other figures. No 30th Anniversary playsets ever made it to production. The story is a sad reminder of Joe's final days when Hasbro felt that large toys were retail death. It also shows that despite many modern collectors' gripes about the '94 line, there was still great inspiration behind it. It was corporate stupidity that never allowed many of the possibly great toys from being released. Again, though, it is another look at what might have been.

It seems this profile has run out of steam. It's happened to me before, though not for quite some time. At any rate, while this figure seems very cool upon initial appearances, I really don't have many uses for him. While he might work in the Defiant Space Shuttle or even the Crusader, there are so many other, better astronaut figures in the Joe line that I don't have any real need for this guy. He looks great and has an air of authenticity that fleshes out dioramas and displays. As a toy, though, the figure can't live up to his better molded contemporaries. There's no shame in that. This figure wasn't designed as a toy. He is one of the few figures released in the Joe line with that distinction.

In 2005, Hasbro brought this mold back in the comic packs as Flash. The figure features a new head, though it is similar to the original Action Astronaut's. But, the figure's body is pretty much the same as this original version. As such, if you're looking for a cheap and easy to find alternative, well, the Flash really isn't it as he was part of the series of comic packs that were short produced at retail. So, while neither of the figures that use this mold are expensive, they can take longer to find than most collectors are willing to spend for a mold of this type.

Back in '94, these guys were sold as "collectibles". They were marketed as a keepsake rather than a toy. Now, 7 years later, you can still easily purchase boxed sets of the 30th Anniversary team for right at, if not under, their original retail price. I'm sure many speculators and dealers got severely burned on this set, but that just shows how volatile the toy market is. Now, these sets are easily acquired. Of course, finding a loose one is fairly tough. It took me nearly 2 years to do that. It cost me considerably less than a boxed set, though even those can be had for under $30. With that in mind, people don't really want these guys. While the figures are good, they are not really in line with other Joe figures. As such, collector interest really isn't there. Some years from now, I still don't see these guys being highly sought after. While this guy and the repaints of the Sailor and Pilot are certainly among the least produced figures in the entire line, the figures are rather bland and uninspiring. What made Joe was the characters. Without these personalities, these figures are doomed to a lifetime of obscurity. Of course, that means that for people like me who find these guys eerily cool, they can, and will be able to, be had for cheap prices in desired quantities for some time to come. That's the way Joe figures should be.

I've now got all 7 versions of the 30th Anniversary figures. Surprisingly enough, I don't want any more. However, if you have a 1987 Payload that you want to trade, email me. 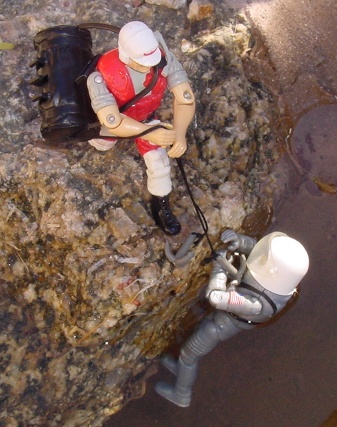 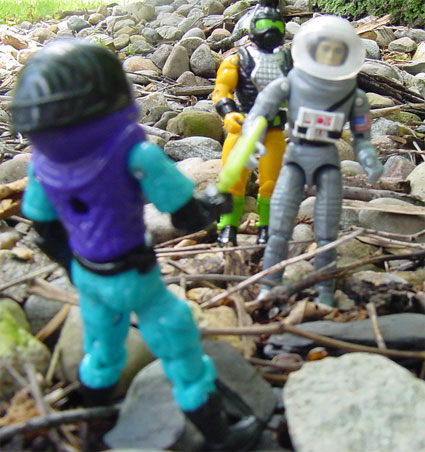