Many times, I referred to the days when I first returned to Joe collecting. It was in '92 and '93 and I didn't buy too many new figures. Mostly, I stuck to character that I knew or figures that looked really cool and had good accessories. One of the figures I picked in late '94 or early '95 was the 1992 Wild Bill. He had a decent look, cool enough accessories, and a nice hat that I thought was really cool. I sided this guy with my 1994 Flint and my '87 Mercer. They were a mercenary team that helped Joe, but wasn't really on their side. Naturally, this lead to a great deal of use for this figure and made him one of my favorites for a short time.

Like most of the figures I acquired back in the mid 90's, Wild Bill is still a sentimental favorite of mine. I only purchased a few figures at retail back then and my collection was very small. I wanted to find most of the figures that were showcased on the package art, but by then, most Joe figures were gone from retail. The few you could find, I snatched up even if it meant paying for the figure in dimes and nickles. That scenario, though, afforded me a greater appreciation for the figures I could find. I was able to let my imagination run wild with my small contingent. I only had a few Cobras at retail so I had to use some other figures in more creative ways to really expand my horizons. Wild Bill was an integral part in this and saw use in a wide variety of areas. He started as a villain. He then became a secret agent that was on the Joe's side. After that, he became a maverick that really only looked out for himself. Keeping the character represented by the original figure allowed me to use this guy any way I wanted.

When I first saw the picture of the 2000 repaint of the '92 Wild Bill mold, I was excited. It was very cool and something that I thought I would want. As per my M.O., though, I passed on the Locust for a long time after it came out. I finally got one for Christmas and was really amazed at how well done it was. There was a lot of collector sentiment against the Locust. The colors were bizarre and not everyone was as sold on the use of this Wild Bill mold as I was. This gave me rather low expectations for the Locust, but I was happily surprised. The chopper is actually very nice and fun to use. The fact that Wild Bill was a better colored version of my favorite mold of his was just an added bonus. I've been very happy with the inclusion of many later year Joe molds in the new line. Many were well done, just poorly colored. Now that they have a chance to do them over the right way, we are really seeing the potential many of these previously forgotten molds held.

Back in 1994 or 1995, I created another faction for Joes to fight. In other profiles I've alluded to how Cobra has moved to South America and started their operations down there. During the initial phases of this plan, Joe was out of the picture. Cobra's movements were so secret that the Joes had no clue what was going on. During this, I introduced a new contingent of mercenaries who were operating is former Cobra controlled areas. Cobra was quiet and didn't want to bring attention to themselves, so they called in the government for help ridding them of these mercenaries. Wild Bill and the 1994 Flint were two of the best, most important, and most mysterious mercenaries in this bunch. While the Joes pursued these guys, so did the remains of the Cobra forces. The three faction story where everyone is enemies made for some interesting times. However, there was a slight twist. The character portrayed by Wild Bill was secretly in cahoots with a high ranking military officer represented by General Flagg. By using Wild Bill, Flagg was able return under the command of his old acquaintance General Hawk. Basically, Flagg represented a splinter group I had created in my childhood. By using Wild Bill, I was able to tie together a number of old elements of my Joe world before I really launched into the whole South American invasion that has been my primary focus for the past 7 years.

The 2000 Wild Bill was only available with the Locust helicopter. Now, almost a year later, you can still occasionally find one of these buried on a store shelf. Target stores, though, clearanced them out at $3.24. With that kind of a deal, you can't afford to not add this guy to your collection. As time goes on, I think some of the original wave 2000 series Joes will really start to become tough to track down for affordable prices on the second hand market. I don't see Wild Bill in that category. The cheap Locusts were a boon for customizers everywhere. I've seen dozens of people who took a Locust and converted it to something much more exciting. You can be sure that all those extra Wild Bills will one day find their way into the hands of people who never bothered with the vehicles. Like all things available retail, though, I still think that if you're waiting to buy this guy, you should act now. You can never predict what product that is available at retail today will become the hard to find on the second market tomorrow. In fact, history has shown that the figures and vehicles that have been pegwarmers and clearance fodder of the past few years have become tough to find after they disappear from retail. Tough to find doesn't always equate to expensive, but that's not a chance I would want to take. At any rate, I've got my figure and really enjoy him. I think you will as well.

P.S. If you are a fan of the original Wild Bill mold, keep your eyes out for a planned Funskool release from India. There is an original mold Wild Bill figure planned for later this year. I don't know what it will look like, but when Funskool is involved, there's always great potential.

This is a nice figure, but not one of whom I build armies. Did you get all the Wave I army builders you wanted? Let me know. 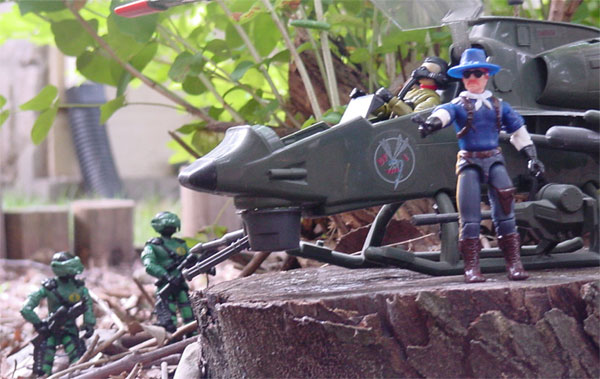 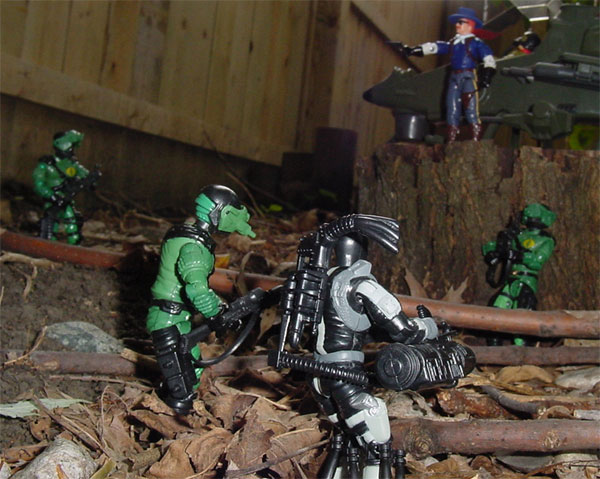 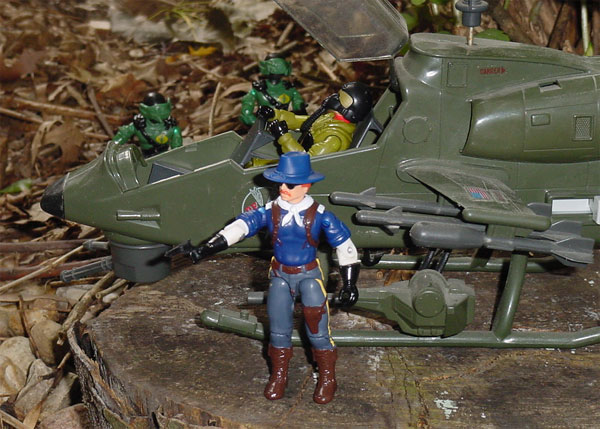