1989 was a year the first real year where many older characters finally got an upgrade. While figures like Snake Eyes had already gotten an update, 1989 saw several classic characters reinterpreted in new ways. I think this was partially a way to keep original fans interested as they moved out of childhood and into their teenage years and part to keep trademarks active without having to put tons of old characters into subsets like Tiger Force. In most of the cases, though, the newly molded figure was highly superior to the original 1982 mold. Stalker is not quite an exception.

This figure suffers from one glaring problem: the head. The figure's head just doesn't look right. It appears as though Stalker's face was mashed in with an iron. It is too long and very, very flat. It lacks the depth of character that was exhibited on other Stalker figures during the line's original run. Aside from that, though, the figure is really well done. The mold is well detailed and colored appropriately given this figure's specialty. The combination of green and white creates a mix that blends with sub arctic terrain. However, for other uses, it becomes problematic. The figure is light and that makes it hard for the mold to stand out. On top of that, the mold lacks many of the small intricacies that we have grown accustomed to. As such, the figure is just that much more non-descript. While in many cases the "less-is-more" theory holds, in this case it detracts from the figure as a little extra detail may have made the mold more memorable.

For me, it is nice that I have a Stalker mold that I can use in other climates. Stalker is one of my favorite characters and I like being able to use him in multiple environments. This outfit works when I want an arctic Stalker. The thing is, I don't often have a need for a figure like that. There are other arctic specialists who are better suited for snow missions. I had to come up with a special reason why Stalker would be included on an environmentally specific mission. I think that's the primary reason this figure isn't so popular. While a solid mold with great accessories, Stalker is not an arctic character. The mold doesn't make enough sense for most people to use it as their primary Stalker figure. I know it doesn't for me.

When I first returned to Joe collecting, this was one of the figures that I really wanted. I remembered him from my youth and thought he was pretty cool. I also liked Stalker and wanted to add every version of him to my collection. At that time, most collectors were focused on major characters rather than simple army builders. As such, it took me a while to finally get a nicely conditioned version of this figure. However, once I got one, several others followed rapidly. The thing was, none of them were complete. I managed to put together a complete figure from the several specimens I acquired in the lots I bought but I never did pick up a fully complete Stalker in any of them. (Despite the fact that these lots were, for the most part, otherwise full of complete figures.) Once I managed to get him, though, I felt that one of my early collecting goals was accomplished. It was a good feeling and freed me to move ahead with different aspects of my collection.

This Stalker mold has seen release not only in the U.S. but also in China and Brazil. The mold could still he under Hasbro's control or it could be sitting in a Funskool warehouse. Either way, I don't think we'll see this mold again any time soon. As far as Stalker goes, there just really aren't that many collectors who associate that character with this figure. Even the '94 version is more closely tied to the character than this one. The tundra specialty is just too binding for most people. I know I don't want to use an arctic figure in a forest setting. I'm not alone in this sentiment. Were there to be any more classic style Stalker figures released, I would much rather see the original or '94 mold used. (The '91 Talking Stalker that was re-used for the new Tiger Force set leaves a lot to be desired.) Those are truer to the character I know as Stalker.

1989 Stalkers are prone to discoloration. (As all white figures are.) He also came with a lot of small, easily lost accessories. As such, it can be a challenge to find a mint, complete version. As this version of the character is less popular, though, he still won't cost you. That gives you a nice opportunity to acquire the Stalker character without having to spend a lot for the original or '97 molds and not search out a '94. If you only want the figure with maybe the gun and mask, he can be easily found via a number of outlets. In my early days, I considered this figure a positive when I was weighing whether or not to buy a lot of figures. I like the mold and consider this figure a neat addition to a collection. Arctic figures have far fewer uses than normally colored figures. In the case of the '89 Stalker, though, I think an exception can be made and he can find a nice home in any collection.

Stalker is a nice figure. In fact, I can't think of a bad version of Stalker that was ever made. Can you? 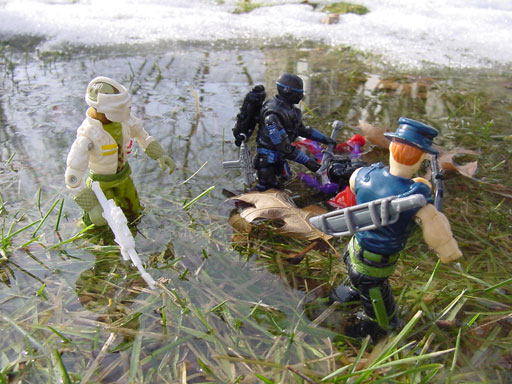 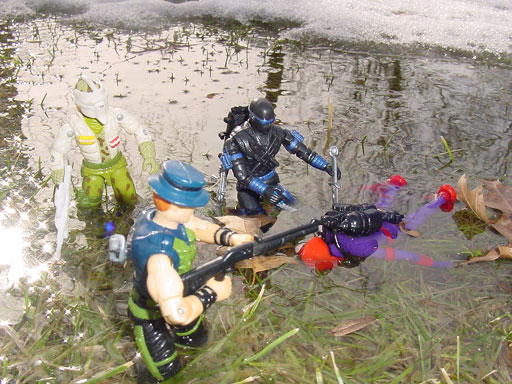 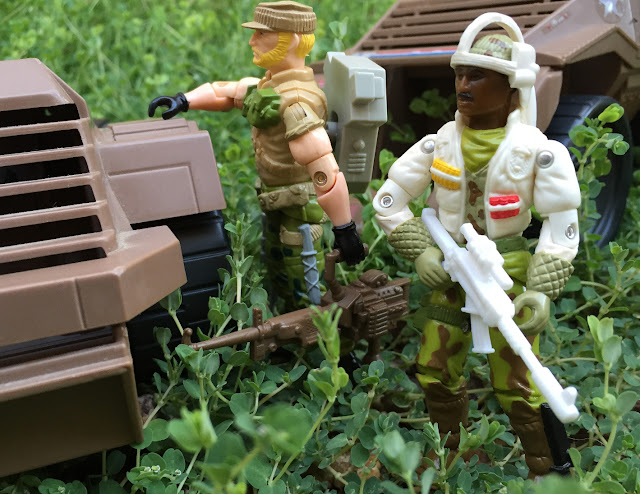 Posted by Robot_Sonic at 1:52 PM
Email ThisBlogThis!Share to TwitterShare to FacebookShare to Pinterest
Labels: 1989, Stalker