Back in the summer of 2000, the online Joe collecting community got their first look at the wider scale relaunch that would be coming their way in the fall. Early images of the upcoming figures were shown at a toy show. Reaction was a bit mixed as these initial prototypes still exhibited some raw flaws that needed to be ironed out. One of the problems that was pushed to the forefront by the '00 releases that was not resolved, though, was the loss of copyrights on many codenames. While this had happened before in the TRU exclusive releases, the broader scope of the '00 figures made the problem more prominent. Among those most affected was the long time leader of the Joes, General Hawk. In a bold move, Hasbro decided to keep the character intact but simply supply him a new name. Thus was born General Tomahawk.

The best part about General Tomahawk was that he utilized the nicely done but rarely seen 1991 Sonic Fighters mold for General Hawk. This mold was a stark contrast from other interpretations of the General and was a figure that, done right, made for a sensible re-release. Despite the name change, this figure was well received. In an attempt to maintain their momentum, Hasbro returned to this mold in 2002 for the quickly conceived Wave 1.5 figures that were, for the most part, repaints of classic figures. This new mold of General Tomahawk maintained the quality of his first release but was done in a less busy color scheme that really produced a quality figure.

I like the color schemes on the Wave 1.5 classic mold figures. My harshest criticism of the '00-'02 ARAHC figures is that they all look the same. The colors are muted and dark. In a quest for gritty realism most of the personality was stripped from these releases. As such, aside from a few figures who stand out, the ARAHC figures are not high on most collectors' lists. The Wave 1.5 figures tried to change that. Gone were the hushed shades of olive and brown and in were brighter, yet believable, color schemes that were more reminiscent of the line's glory days. This figure uses tan, off-white and a teal green blend to create something very different from what we had gotten used to seeing. Tomahawk's only drawback, in terms of color, is that he is very similar to the Wave 1.5 Big Ben. When posed together, these figures mesh too well. Apart, though, the originality in the color scheme comes through and allows you to appreciate this mold.

This mold has had a sordid history. The 1991 figure was okay, but suffered from golden weapons and a huge sonic backpack that played sounds upon the push of a button. Once the pack was removed, the figure had some great qualities. The head sculpt looked like a hard-ass general who would lead a group like the Joes. (It had also become a favorite of customizers who used to create Schrage customs as well as other, high ranking, American military, fan created characters who were the faceless enemies of the Joes.) However, the head was done in a horrible color that made the figure look either extremely sunburned or simply sick. This alone was enough to push that figure into obscurity. The 2000 figure fixed a few of these problems but used marbelized plastic on the chest, arms and legs. On many figures, this was okay. However, the nature of the mixture means that no two General Tomahawk figures are alike. Of the four I have, 2 are colored with far too much white and look bizarre. It was not until 2002 that they finally released the mold in a nearly flawless color scheme. However, the mold still has one drawback. Despite being finely detailed and well worthy of a character of Tomahawk's stature, an original feature from the Sonic Fighter figure was left as a legacy. In order for the sonic packs to work, the 1991 figures had to have their backs molded flat. While the 1993 Cobra Commander featured a back that was fixed and looked more normal, the two versions of Tomahawk were not. As such, if you turn this figure around, the back looks very out of place. It is a small nuisance, but something that has kept more than a few people from fully enjoying this figure.

In my collection, this figure is General Hawk. While I no longer use General Hawk as the combat leader of the Joes, this figure remains important in an advisory capacity. I simply give him the large pistol included with him (the great part about this figure is that his extra accessories are a perfect match for the '02 Green Vipers. Since the '98 Cobra Troopers, I've used Tomahawk's spare rifle and pack as standard Cobra arms. This gives me the ability to update the crummy accessories that came with the '02 Viper flavors.) and have him restricted to a base or non-threatening setting. He is still important, but now simply advises the actual combat leader of the Joes. You see, my General Hawk character is heading towards retirement. It's not that I don't like the character. In fact, to me, Hawk has always been the leader of the Joes. It's just that Hawk said he had thirty years of military experience back in 1983. That makes him a bit long in the tooth. While I don't perceive him to be nearly 70 years old, I do think that Hawk would be at the point of his career where he would be giving press briefings and consulting his field commanders rather than leading alongside them. For me, this works. It allows Hawk to keep his well deserved dignity but also step aside so he does nothing, in his old age, to tarnish his reputation.

Rumour has it that Hasbro did not intend for this version of Tomahawk to be the same as the '00 figure. They wanted to use the '86 Hawk mold, that they had just pulled out of storage in 1997, for this figure as a way to add some variety to the line and appease fans who like that mold. In addition to this, they also planned for the Sure Fire figure to be the 1988 Shockwave mold. This is why the two figures that were released were packaged with less desirable Cobras. It was thought that these Joe molds would sell themselves. However, neither the '86 Hawk nor '88 Shockwave toolings could be found. As such, we are left with the figure molds that were released. While decent in their own right, they are not up to the standards the intended molds would have presented. It is another case of what might have been outweighing what we actually got. It's not bad, but it leaves a sour taste on these figures as collectors lament what might have been.

If you want this version of General Tomahawk, you can probably still find them at retail in many parts of the country. Many online Joe retailers still have them in stock. Even if they are gone, this is not a figure that will ever be hugely popular. The original Tomahawk is kind of hard to find, but most of the interest in him is only on the carded level. This figure is nice to have and makes a nice addition to a collection but was part of a wave that was probably overproduced and will end up as major pegwarmers in most of the country. This should mean that future collectors will be able to acquire him for next to nothing. That's nice as this is the type of figure that helps fill out a collection and add depth to many scenes. As the leader of my Joes, though, I still prefer the '86 Hawk as he more closely resembles the type of character that would lead an elite unit like the Joes. Most other collectors feel this way as well. It means that a nice figure like this will probably not get the recognition it deserves. Perhaps this little diatribe will change some of that.

I've got all the Tomahawks I need. Would you like to see this character return in a new sculpt figure? Let me know. 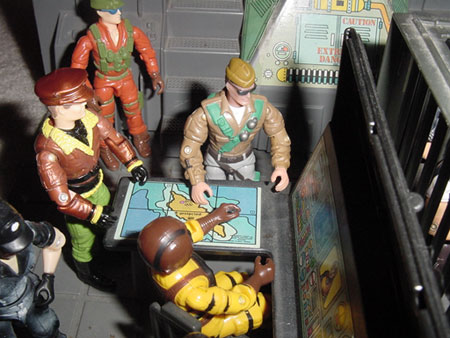 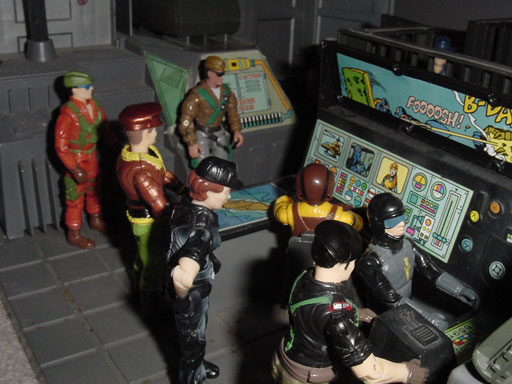 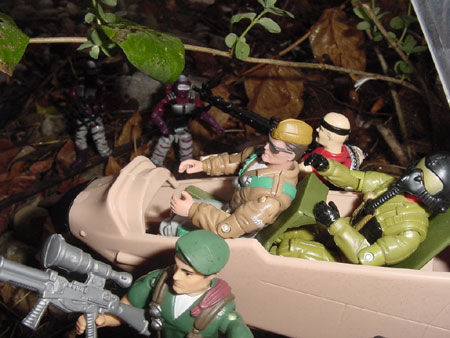 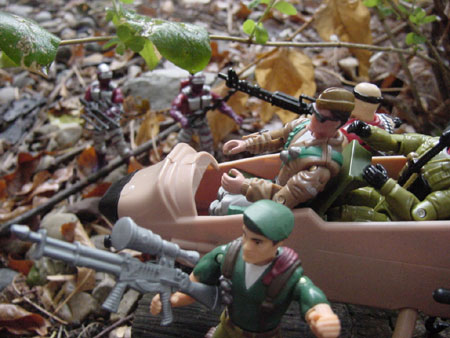 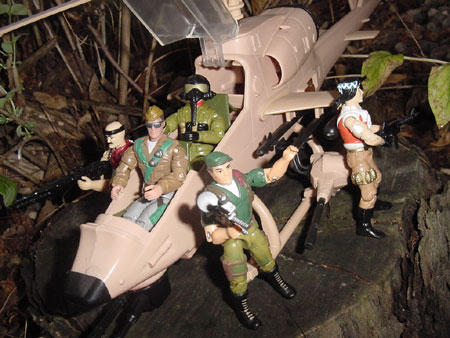 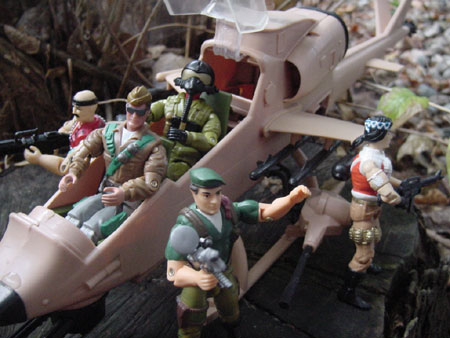 Posted by Robot_Sonic at 1:46 PM
Email ThisBlogThis!Share to TwitterShare to FacebookShare to Pinterest
Labels: 2002, General Hawk