One of the very first figures I ever profiled in this site was the 1984 Copperhead. To this day, I view that figure as a unique character. However, in 1989, Hasbro released the same figure as a member of Python Patrol. While the other Python Patrol members were all army builders, Copperhead retained his vague individuality. However, I, and most other collectors, simply can't use the PP Copperhead as an individual. Despite their large-scale operations in the swamp, Cobra never had a real swamp trooper. With a little creative license, the Python Patrol Copperhead fills that void, nicely.

In my collection, this figure is an army-built swamp trooper. They are a specialized unit of Cobras who patrol the shallow canals, ditches and marshes of Cobra Island. They are trained not only in infantry techniques, but also in security, swamp warfare, tracking and survival. They are given the responsibility of sniffing out any intruders who manage to get past the Island's coastal defenses and attempt to infiltrate the Island itself. As my vision of Cobra Island has it now housing several high end casinos, the PP Copperheads are also responsible for ensuring that no drunken tourist wanders too far off the casino lots and ends up as alligator food. As such, this specialized unit reports directly to Croc Master.

In my opinion, the PP Copperhead works better in his colors than most of the other Python Patrol figures since the combination of green, black, yellow and red actually work for a swamp trooper. He also comes with nice accessories (black versions of the pack and M-203 that originally came with the V1 Leatherneck) that work with him even though they were originally meant for a Joe. This isn't to say the figure isn't bright. However, he is the type of bright that actually works. You can see from the photos below that the figure works in a lush setting. That is one area where the Joe line failed as it progressed. After a while, figures were bright for the sake of brightness. There are instances where brightness is warranted. Fortunately, the new Joe releases seem to be more in line with may of the older Joe figures in that regard. However, we are starting to see some odd colors creep into the line. At this point, they are still forgivable. How they proceed will determine if that remains to be true.

The Copperhead mold hasn't lead the interesting life of some others, but it is well-traveled enough. The figure was first released in the US in 1984. That figure was then also available via mail order in 1989. (It stands to reason that Hasbro either used the mold to create some overstock figures for the mail away or already had them left over from 1984/1985 to create this mail away figure. Bagged Copperheads were actually available as late as 1999 from Hasbro Canada. So, Hasbro probably just produced a large quantity of them and left them in a warehouse for years as overstock.) Then, this figure was released in 1989. Around 1990, the Copperhead mold appeared in Brazil. There, he was released in colors similar to this Python Patrol figure as Pantano. (Just a note, there were actually 2 figures named Pantano released in Brazil. One is the PP Copperhead and the other is made from the 1993 Iceberg mold. They are not the same character, though they share the same name. As if this all isn't confusing enough!) That was the last time this mold was in production. That begs the question: where is the mold now? While it's impossible to determine, a quick look at Pantano's contemporary releases might give us some clues. The Brazilian Python Patrol featured Pantano, Tocaia (PP Crimson Guard), Gatilho (PP Airborne) and Relampago (PP Ripcord). None of these molds have appeared anywhere since their release in Brazil. Among Pantano's other contemporaries, though, are a number of figures who have also subsequently appeared in India. The Pantano cardback features 21 figures. Of these, 10 have since been released by Funskool. None of them, with the exception of the V1 Low-Light have appeared in the US without also appearing in India. So, it really is impossible to determine the whereabouts of this mold. Most likely, it is still locked away in some warehouse down in Brazil. Regardless of it's location, though, I don't think many collectors would be excited about a repainted Copperhead. New sculpt, maybe, but this old mold doesn't offer much that hasn't already been exploited by the various color schemes.

One other interesting note about this figure. The Brazilian exclusive figure Gatilho uses his exact color scheme. In the second photo, you can see how the two figures match up near perfectly. My guess is that this was by design. Estrela was looking for a unique way to color a mold they had available and found that the PP Copperhead scheme looked good on Airborne.

In the late '90's, Python Patrol Copperhead figures were kind of tough to track down. At the time, the entire Python Patrol set wasn't all that common. You could get them haphazardly, but even a focused effort rarely would yield large quantities of Python Patrol figures in a short time. Now, things have changed a bit. While figures like the Viper still tend to be less common than many collectors would like, guys like Copperhead are now fairly available for decent prices. Mint and complete, you can easily acquire a Copperhead for under $12 or so. That's really not too bad a price for a nifty repaint of an obscure character. As this figure can be used as an army builder as well, the price just gets more attractive. I know that I'm happy with a few PP Copperheads roaming the swamps and waterways of my collection. 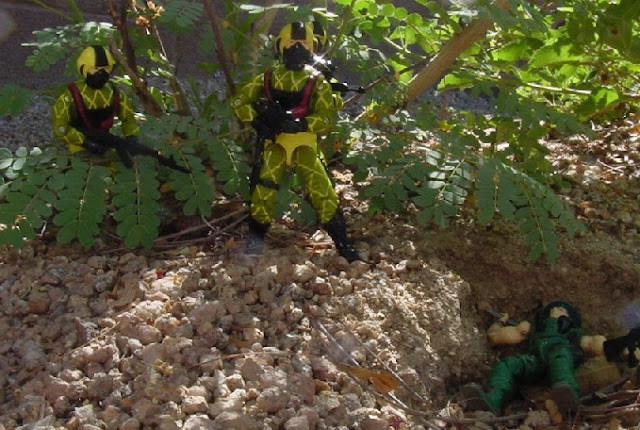 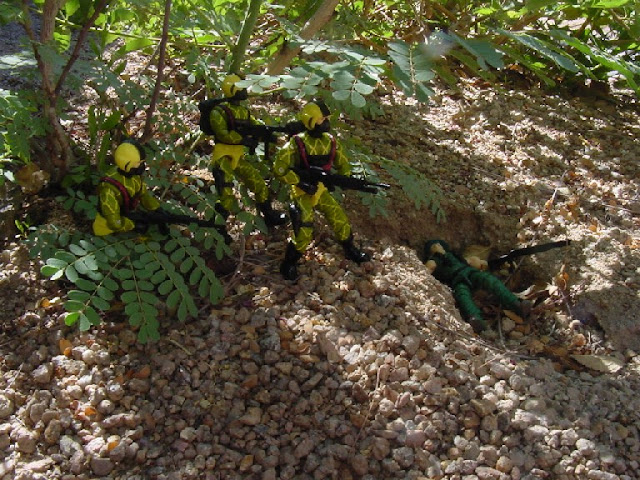 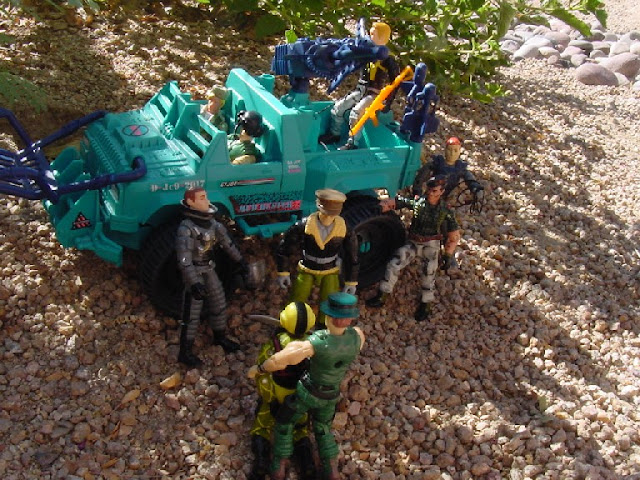 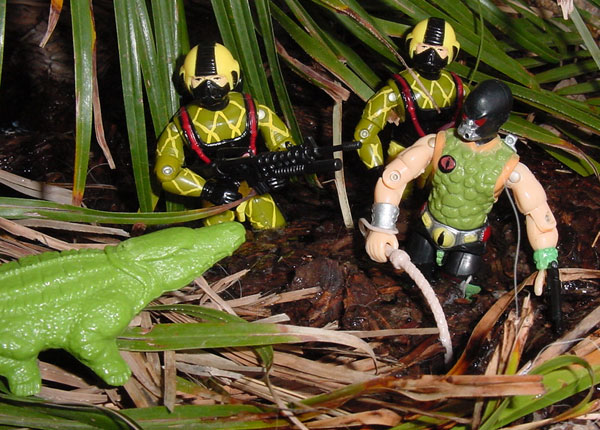 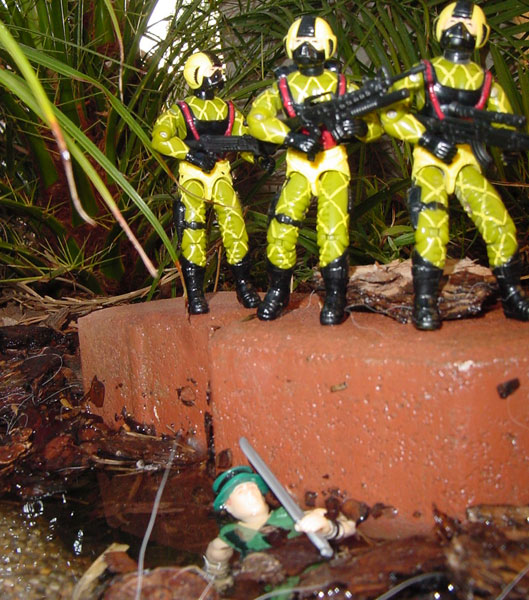 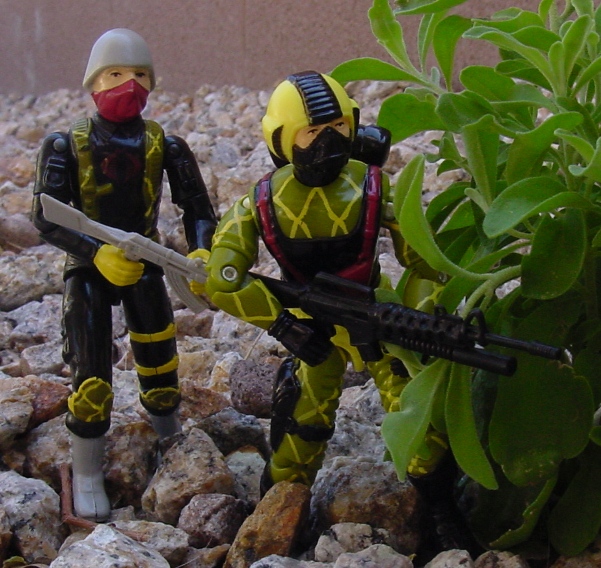