In the history of the Joe line, there are a few items that just stand out above all the rest. They are not always the best toys, the most fun to play with, or even the hardest to find. Instead, they are items that, for a multitude of reasons, have captured collectors' attentions and have been able to hold them to modern times. Many of the vehicles are the classics from the line's earliest years, though there are a few from later times. Mostly, though, they are the type of thing that is either completely original, amazing in scope, or versatile enough that they were able to function in a variety of environments. Such was the case with the original VAMP mold.

I have always viewed the Desert Striker as more of a utility vehicle than a combat jeep. The ammo boxes loaded on the front and the large drums on the back give this jeep a look of a support vehicle rather than a fast attack jeep. In a large collection, something like this can be a nice little addition as you may have need for a jeep that isn't as combative. However, for most collectors, this made the piece boring and of little use. Having a utility vehicles is not something that most collectors hold high on their lists. The original VAMP, though, remains the definitive combat jeep that was released in the Joe line. It's sleek design, cool gun and brash driver have kept it a classic to this day. That legacy only made this rendition of the jeep that much more disappointing. The original VAMP was daring and original. This Desert Striker seems clunky and dated. I think that mostly stems from the modifications to the mold. The roll bar is different, the back gun is gone and the front hood, while a cool little feature, takes away from the detail of the original. One thing I do like about this Desert Striker, though, is the mounted passenger gun. I always wanted mounted guns on my Joe vehicles. Early on, few vehicles had them. So, I often either glued or otherwise attached mounted weapons to my favorite vehicles. It gave them a play feature that I wanted. Having that little aspect has made the Desert Striker worth keeping around in my collection.

Mostly, I use the Striker as the utility type vehicle that I outlined above. Much of my Joeverse revolves around renegade criminals rather than a militarily strong Cobra. As such, many scenarios I play out involve those types of people attacking small units of Joes. In cases where Cobra is involved, they usually target smaller, less defended Joe units as a way to ensure success. In both of these cases, the Desert Striker works well. I also use it as part of my police forces. The Striker includes several little spiked balls. I use these as tire-poppers to stop fleeing criminals. The Striker can then also act as a fast pursuit vehicle that is capable of catching high speed motorcycles. It has the versatility that I usually look for in a vehicle, even if those purposes are somewhat mundane rather than specialized.

The Desert Striker really failed, though, in its choice of driver. Originally, the Desert Striker was shown with a '92 Dusty figure repainted in desert colors. At the time, this mold was still sitting on retail pegs, so releasing it again seemed like overkill. However, I think just about every collector would have taken that figure over the one we actually received. The Striker included Flint. However, instead of utilizing his classic '85 mold or even his underrated '94 mold or trying to amalgamate a new version of the figure, Hasbro chose to repaint the awful Eco Warriors mold in desert colors. To make matters worse, they failed to include any accessories with the figure. Thus, collectors are left with one of the worst conceived figures in the history of the line. The poor choice of driver helped squash much of the little interest that was left in this item and helped ensure its place in obscurity.

Desert Strikers aren't too hard to find. They weren't bit sellers and they sat on many retail shelves for long periods of time. Collectors simply didn't take to the combination of the modified VAMP mold and the poor figure selection. As such, they remain cheap acquisitions for those collectors who either passed them by or weren't around when they were first offered. For the price, they are decent. But, Hasbro is about to release a repaint of this jeep, along with a Whirlwind and 3 figures as a Toys R Us exclusive. So, anyone who missed out on it will have another chance at it in a paint scheme that is more versatile than the Desert theme. After that, if they are going to resurrect the VAMP, I would hope that it would be either as a Cobra vehicle or the original mold. I think those would be well received despite the fact that this new VAMP will likely end up as a pegwarmer in most of the nation. 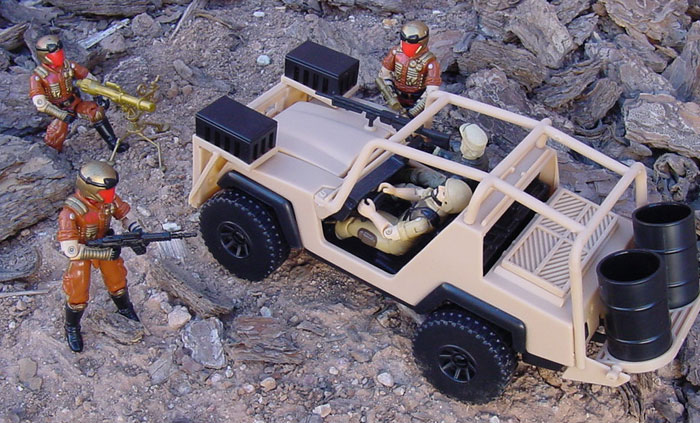 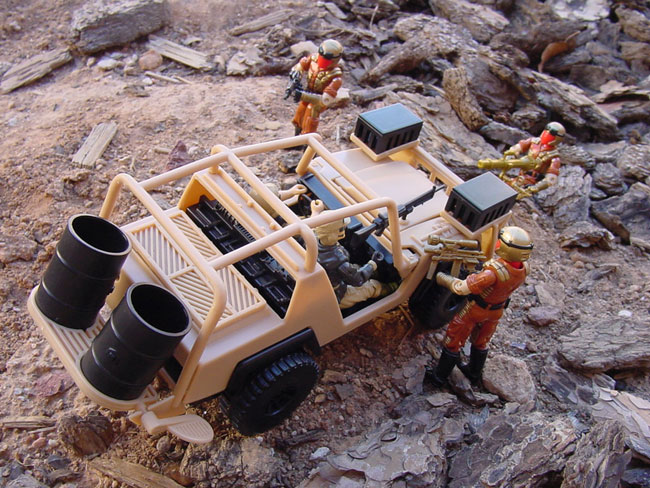 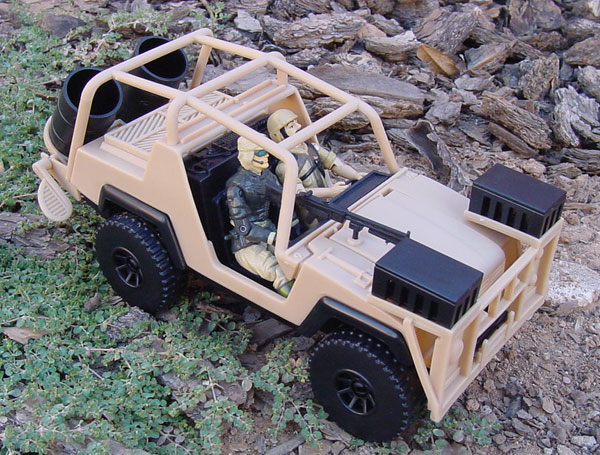 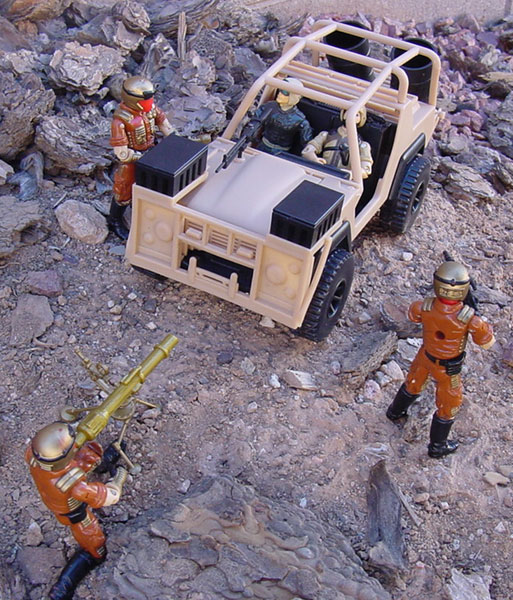 Posted by Robot_Sonic at 11:14 AM
Email ThisBlogThis!Share to TwitterShare to FacebookShare to Pinterest
Labels: 2001, Desert Striker, Vehicles