The history of this site is riddled with foreign exclusive Joe figures. Foreign Joes are one of the areas where collectors can continue to grow their collections even after the American line has run its course for them. While many countries have produced exclusive versions of G.I. Joe figures, those from Brazil tend to be the most unique. Indian figures are, for the most part, just recolors of American characters. The same is true of those figures from Europe. (Except for the Action Force repaints.) Argentina produced a few exclusive characters, but the line there was very small. In Brazil, though, the Estrela toy company produced unique repaints of American figures but also churned out many characters who were exclusive to that country. Among them is a hidden gem of my collection: Corrosao.

Who is Corrosao? If you read my profile of Letal, you would know that Corrosao is the same character in my Joeverse. I just can't have two South American bio-terrorists in my collection. As such, it makes more sense for Letal and Corrosao to be one person. The Letal suit is for when he is either in the field or working directly with dangerous chemicals while this suit is more suited for his lab work or after hours business dealings with the Cobra hierarchy. This gives the character more versatility in my collection and gives me uses for both the Corrosao and Letal figures. Corrosao is not a major player in my collection, but he fills the role of a lesser character who helps to flesh out my Joeverse. One of the strengths of the Joe line is the diversity in character. You can find a figure to fit just about any niche, no matter how obscure or specialized. The minor characters give the story depth and prevent the major players from becoming overexposed. While marketing data suggests that kids enjoy major characters, I don think that Hasbro should continue to explore other, lesser players in the Joe world. That will allow for a more diverse line that will maintain the attention of toy buyers for a much longer time. (The same holds true of army builders. All army builders and no characters makes for a dull line!)

Like the other Brazilian exclusive figure the Cobra Black Vulture, Corrosao uses a Caucasian version of the Dee-Jay head. Dee-Jay was released in the U.S. as black but was twice used as a Caucasian villain's head in Brazil. Unlike the Vulture figure, though, Corrosao utilizes the rest of the Dee-Jay and is not amalgamated from other figure parts. Were Dee-Jay a more popular figure, I think this would pose a problem. However, Dee-Jay may be the single least sought after in the entire American Joe line. His obscurity allows me to use his mold on Corrosao without having to worry about both Corrosao and Dee-Jay appearing in the same scene. (Such is not the case with other Brazilian exclusives like Urzor.)

The Dee-Jay mold was released in the U.S. in 1989. Shortly thereafter, it was sent down to Brazil. Here, it was used as part of exclusive amalgamations. However, in 1993, Hasbro re-released Dee-Jay as the 4th member of the Arctic Commandos mail away set. This new Dee-Jay was produced in bright, neon colors that would have made him easy to find in the ice and snow. However, the Dee-Jay figure was bagged separately from the other three members of that set. The reason was that the Dee-Jay figure was actually produced in Brazil for use by Hasbro. Rather than re-acquire the mold, Hasbro contracted Estrela to manufacture the new Dee-Jay figures. They were then bagged and sent to Hasbro who packaged them with the other figures to make the set. As such, you may notice a few similarities between Corrosao and the arctic Dee-Jay. The reason is that they were produced by the same people. (Whether Estrela got to choose the color scheme for the arctic Dee Jay, though, remains a mystery.)

While this figure is interesting enough, I don't feel the need for Hasbro to ever release the Dee-Jay mold again. I think it is one of those that is best left on history's scrap-pile. However, I do think that Hasbro could look to some of the foreign figure concepts as a way to expand the ARAH-style Joe mythos. While I don't want Hasbro to re-release their renditions of foreign figures, I do think they could look at how some of the other Joe producing cultures have interpreted the line. I think that, done right, a Cobra Eco-Terrorism figure set could be very well done. Toxo-Vipers are cool figures that have long suffered from a color scheme that collectors tend to dislike. BATs are perfect for toxic waste duty. (And Cobra can then avoid unpleasantries like the Toxo-Zombies!) And, it would be fairly easy for Hasbro to create a new Cobra villain who would lead such a brigade. In my opinion, a set like this could draw upon the international legacy of the Joe line while still capturing the essence of the American story-line. It could also tie the new toys into some of the more glaring realities (like bio-terrorism) of the modern world. I think that this would be an interesting avenue for Hasbro to attempt with their ARAH-style Joe re-releases. Done right, I think collectors would respond favorably.

If you look at Corrosao's card art, you might think it seems familiar. While the artwork itself is unique, the pose on the card is not. It is a near match for the art on the American Toxo-Zombie figure. If you look at the other Brazilian Eco-Warrior's cards, you will notice the same phenomenon. In fact, Funskool continues to mimic Hasbro art poses to this day on their exclusive card art. Chances are, the Hasbro art templates that were used to create these eye-catching sketches were (and still are!) used by foreign toy companies as the poses could easily be adapted without the artist having to re-evaluate the space available to him on the canvas of the cardback. The poses worked in their intended space so foreign companies could use them to save design time. (You will note that Brazilian Eco-Warrior cardbacks are oversized, just like American Eco-Warriors figures.) This also kept a unified look of Joe releases the world over. Even if an American were not familiar with the "Commandos Em Acao" moniker, the design of the cards were such that they would remain familiar despite the language barriers.

Corrosaos can be difficult to find. A few years ago, a large toy dealer got ahold of a large amount of carded Brazilian Eco Warriors. The dealer sold these off for reasonable prices. The stock lasted for quite some time and many collectors had ample opportunity to acquire all 5 exclusive Force Eco figures. However, as is typical in the Joe community, the unique Cobra figure, Corrosao sold out first. As such, he became the hardest to track down of the 5 figures and remains the most highly sought after member of this subgroup today. That isn't to say, though, that Corrosaos are all that expensive. He can still be had MOC for under $35 and loose, complete figures (if you can find them!) can be had for under $20. While that may seem a bit pricey, it is cheaper than many other Brazilian exclusive Cobra figures. Even were I not an aficionado of odd, brightly colored figures, I would think this a good deal for a figure this unique. Like other foreign oddities, Corrosao works since he was released in Brazil. This exotic pedigree allows for some leeway in color choices and keeps this figure as one of the favorites in my collection. 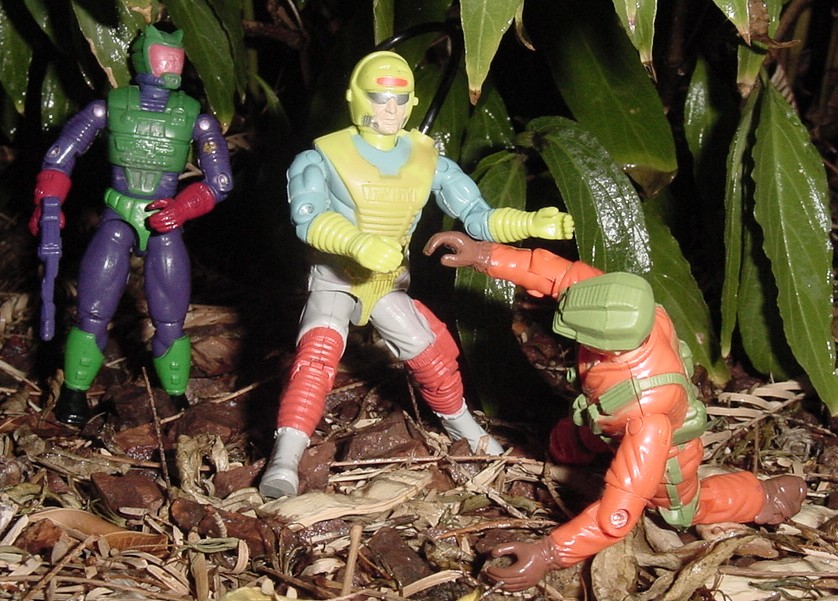 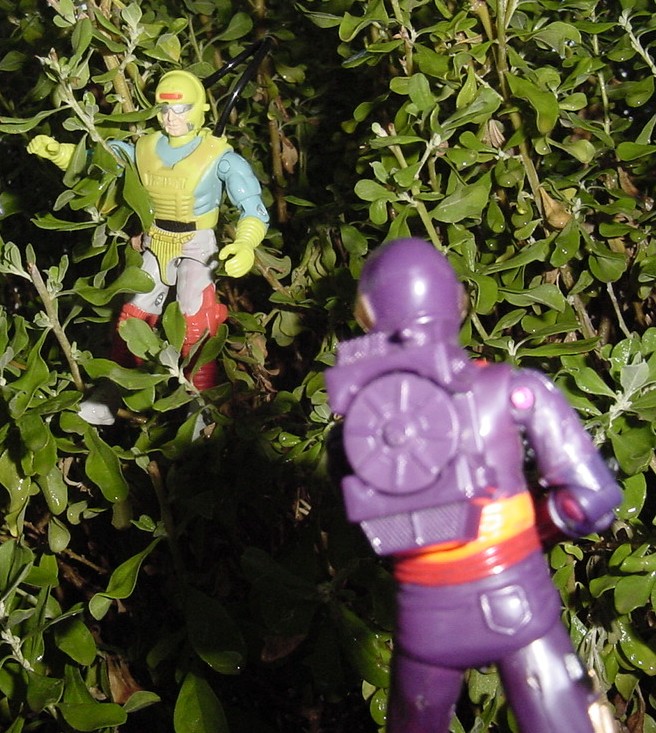 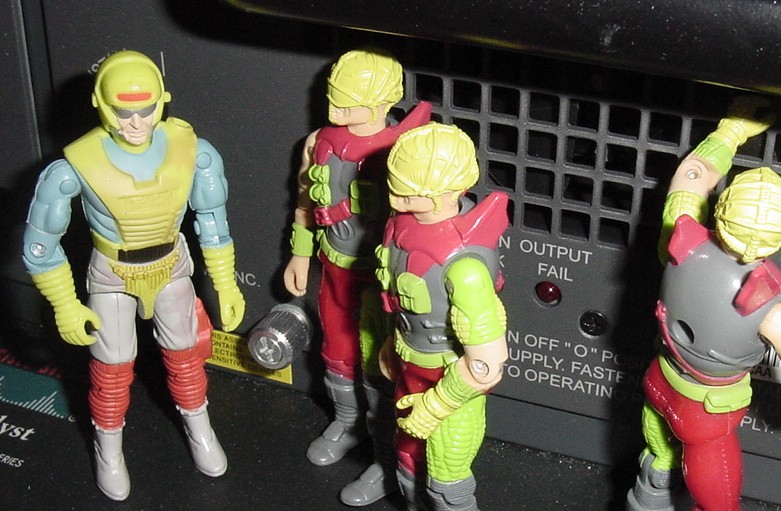