1987 was not the greatest year for Cobra in terms of figure releases. It offered collectors some of the worst Cobra characters ever created. The few high quality sculpts that were available were the almost exclusive domain of the vehicles. One of just two bright spots in the regular carded series figures was the Techno Viper. He brought a much needed specialty to Cobra though his mold suffered from some poor design choices. The figure faded into the Cobra hierarchy and was pretty much forgotten until 1994 when Hasbro dusted the mold off and threw it into one of the last G.I. Joe retail toy offerings of the original run. The result is one of the rarest figures in the entire line. It's just that no one really knows it.

The Techno Viper mold has never quite done it for me. While it is decent, the head has never been able to hold my attention. As such, I never really went out of my way to pick up spare Techno Vipers. I acquired them here and there as I built my collection of '87 figures, but never considered them to be an essential part of any figure lot that I was considering. The mold just seemed too...plain. It lacked the trappings I would expect to find on a field engineer and mechanic. While I like for some figures to have fewer details, I also think those figures should have specialties that dictate the design of their molds. The same holds true on the opposite side as I think that specialties like the Techno Viper should have more on their molds that suggests their role in the Cobra organization.

Now, the Techno Viper is simply a bit player in my collection. On rare occasion, I may pull one out and have in part of a convoy, but they rarely are the primary focus of any endeavor. I find them useful to have, but then never use them. It is an interesting paradox as I would not consider my collection complete without the Techno Viper but I still never find any great use for the figures. They just fit too far into the background of Cobra. Now, my Cobra is heavily geared towards fast, mobile strike forces. The Techno Vipers don't play a major role in the actual combat. It is when the equipment returns to the base that the Techno Vipers get involved. As this isn't exactly an exciting part of a story, it is something that rarely gets played out.

This version of the Techno Viper was only released with the Cobra Power Fighter at the very end of the Star Brigade line in 1994. It made a very brief appearance at retail and disappeared from there. Rumours put the total production numbers of the Power Fighters at around 10,000 units. However, as there are only supposed to be 10,000 of the Lunartix aliens and those are MUCH more common than this Techno Viper or the Gears figure who piloted the Joe Power Fighter, I would say that the production run for the Techno Viper is probably overstated. You just don't see Power Fighters or Techno Viper figures in numbers similar to other late run items who were underproduced.

The Techno Viper was only ever released by Hasbro. It never appeared in any of the other countries who produced their own Joes. As Hasbro was able to resurrect the Barricade mold that was used for Gears in 1994, it is possible that the Techno Viper mold is still available for production. It is a figure that would benefit from a re-release as it is relatively popular and a different color could energize collectors to purchase them in multiples. The downside, though, is that even mint and complete, V1 Techno Vipers are very easy to find and cheap to acquire. So, many army builders already have large armies of Techno Vipers and might be hesitant to double or triple their already burgeoning numbers with the same figure in only a slightly different paint scheme.

The nice thing about the 1994 version of the Techno Viper is that his unique coloring allows him to stand apart from the rank and file Techno Vipers yet still fit in with them. His purple perfectly matches the darker purple parts of the '87 figure but the copper tunic makes him appear as a Techno Viper commander or some other advanced version of the basic trooper. That's good since his scarcity means that most collectors will have a much more difficult time tracking down multiple '94 Techno Vipers than they will '87's.

Some collectors don't like the purple colorings of the Techno Vipers in general. For me, I've always seen purple as key Cobra color. While basic blue usually denoted combat troops, purple denotes specialty and technical troopers. Entities like the Toxo Viper and Techno Viper use purple to show they are more specialized and not the type of troops who are involved in front line combat. So, I don't mind the coloring as much.

My first encounter with the Techno Viper mold was in 1987. On a late spring Saturday, my parents took me to Toys R Us. As it was lawn mowing season, I had a bit of money to spend on new Joe toys. I found an Outback, Fast Draw, Law & Order and the Road Toad. My younger brother chose the Techno Viper. When we got home, I took all our new toys out into the yard and spend the afternoon and early evening having Cobra attack my new Joe convoy. After dinner, I moved the play inside. I sat in the family room of my parents house with the windows wide open: enjoying the sounds of spring insects and the smells of fresh plants as I played and played. The evening ended when Saturday Night's Main Event came on around midnight. For some reason, the pure innocence of that night has come to embody the essence of my childhood and has left an impression that I will never forget. Whenever someone asks me why I still collect Joes, this is the real reason. But, finding a way to properly convey that to any inquisitor is usually a lost cause.

To be frank, this version of the Techno Viper is nearly impossible to find. Every now and then you can find some boxed Power Fighters that some dealer stashed away in the mid '90's. But, even those are tough to track down. However, this has not made the Techno Viper as expensive a figure as his rarity would suggest. You can still acquire the figure for around $20 or so if you are patient. Since this figure is pretty much under the collector radar you can still find them for fair prices. At this point, those collectors who know about this figure have acquired one. Most of the others, though, don't really care. It is the laissez-faire attitude towards this figure that has kept him from reaching the $40-$60 price point that would easily be justified were this figure a little more eye-catching. As always with figures like this, though, the time to act if you want one is now. Truly rare figures are tough to come by in the American Joe line. Eventually, the marketplace finds them and prices them accordingly. That hasn't happened to this version of the Techno Viper...yet. At some point, though, one will go for a king's ransom on Ebay and this figure will enjoy a few months as the toast of the Joe collecting world as collectors scramble to add him to their collections. I've found it's always better to be ahead of that curve. It's just anticipating which figures will be the next to go crazy that is the hard part. 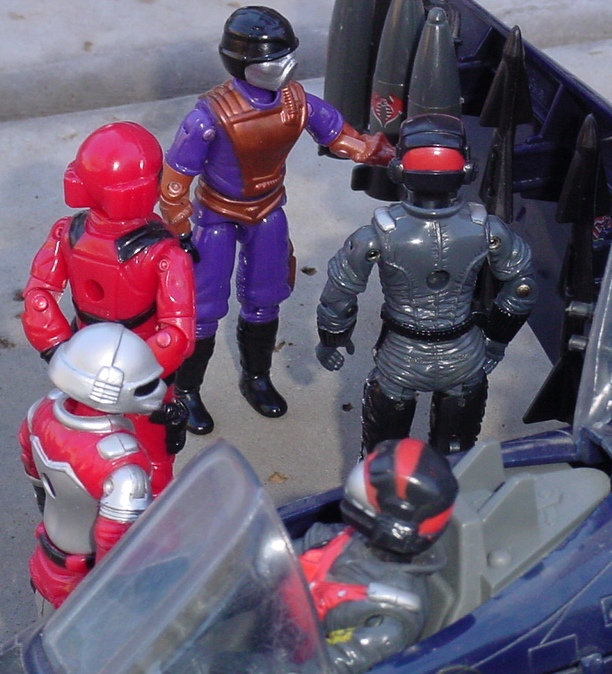 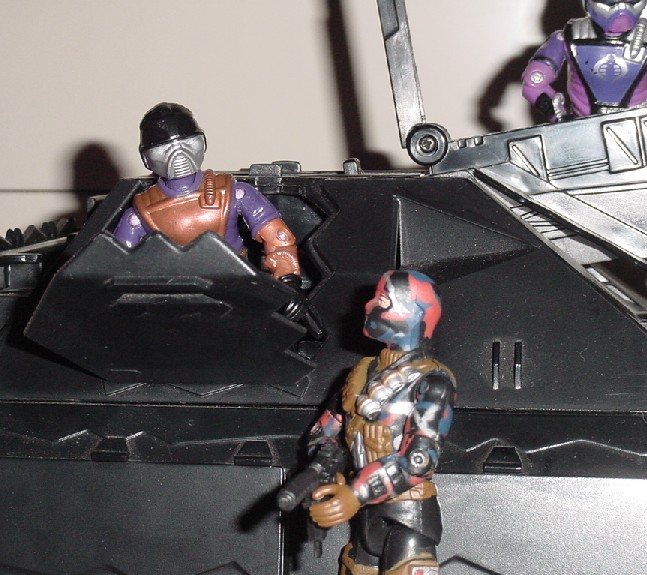 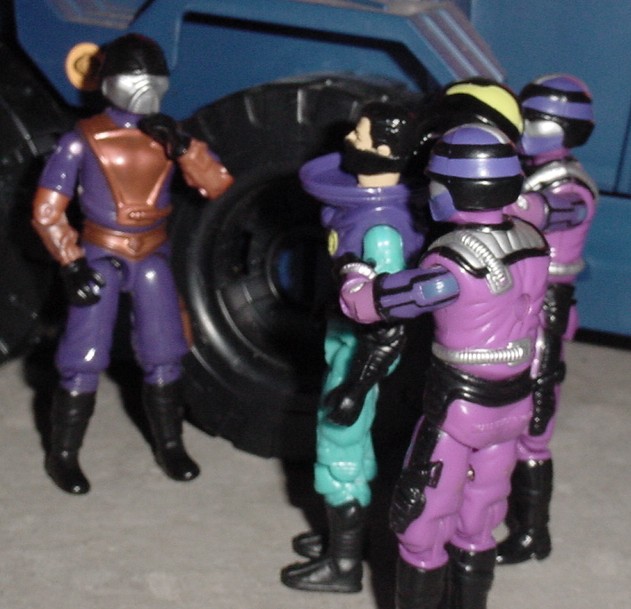 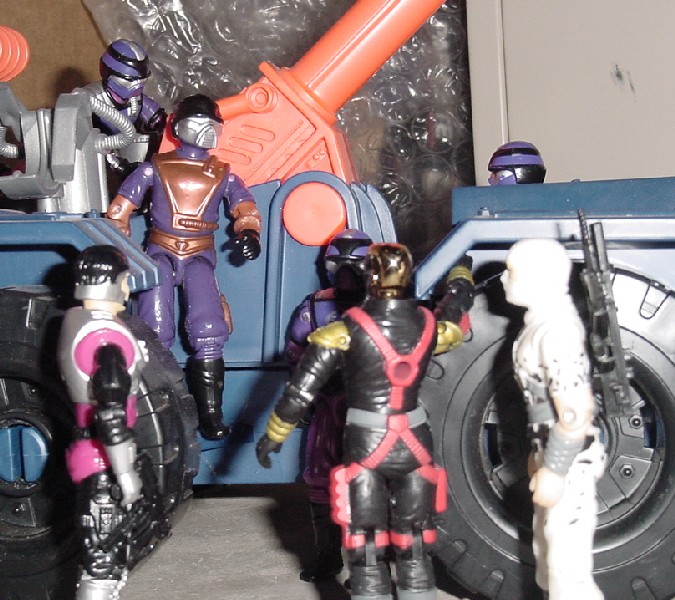