In my years of collecting Joes, I have found that many collectors have small niches inside their main collection. Usually, these are some small little part of an overall collection which can vary from incredibly rare items to common, run of the mill figures that no one else seems to like. My niche is race changing figures. Worldwide, there are a few distinct samples of race changing figures. Some, like the Funskool Iceberg or Stalker figures, are simply an alternate race for an established character. Others, like the Brazilian Flying Scorpion, are completely different characters who used a race change to distinguish the mold. In the US, the 1997 Rock and Roll had a race change that has yet to be adequately explained. In recent years, though, a few pre-production figures have appeared in Asia that have featured racial changes. The two most notable are the comic pack Stalker who appeared with a Caucasian head and the comic pack Hawk who had a black head. Another version of Stalker also appeared with a Caucasian skin tone. This time, both the head and arms were an alternate race. This alternate Desert Stalker is the subject of my latest profile.

The first question most people have when they see this figure is, "what is that?". The reality is that it's not really clear. Since 2002, pre-production Joe figures have been coming out of Asia. At first, they were unpainted samples that might feature minor mold changes or odd color choices versus the actually released versions. In time, though, some other figures began to appear. These were fully painted samples that were done in color schemes that were never released at retail. The first of these to appear were the Wal Mart exclusive paratrooper figures that were planned for a 2003 release. These figures were cancelled, but a substantial production run of them was completed. They began to appear from Asian sellers and the frenzy began. In the coming months, many more oddly colored figures appeared, including a completely alternate paint scheme for the Cobra Urban Assault set and 2 unique paint schemes for the Anti-Venom set.

There is a catchy terms out in the collecting community that I despise. (No, it isn't Argen Seven, though that term is also inappropriately misleading....) It is the term "Midnight Chinese". Usually, collectors use this to refer to all the alternate color figures that appeared in Asia. But, this is a misnomer. Midnight Chinese actually refers to test shots of figures that probably were run with whatever plastic was in the machine at the time. These aren't production figures by any means. These figures that are closer to production are items of a different nature. As such, they should be referred to by a name that doesn't mislead about the figure's origins. I call them Alternate Asian figures. It doesn't have the cachet of Midnight Chinese, but is more accurate for what these figures truly are.

Naturally, this began widespread speculation as to the origins of these figures. While it was certain that the Wal Mart figures were actual unproduced items, others lacked any official evidence as their creations. Quickly, stories circulated of Asian factory workers producing these figures after hours. In some cases, these stories may have been true. But, they were most likely in reference to the unpainted pre-production pieces that had been circulating for a while. The painted figures often featured paint masks that were completely different from any produced figure. The sheer complexity and expense of creating a paint mask is a strong indicator that many of these figures were actually intended for production but were then changed at the last minute to the versions that actually appeared at retail.

Currently, these figures are the source of much debate in the Joe community. There is a small faction of people who swallow every word Hasbro says as pure gospel and cry that these figures are "stolen" or "illegal". There is another contingent of the community who spends time and effort to track these figures down as they find them the most interesting part of the hobby. Then, there is the majority of collectors who really don't care one way or the other. If you want to start buying these figures, I'll just suggest that you do your research. If you follow the trail of evidence it points to a conclusion that is very clear and will ease any objections you may have had to buying some of the figures. I would still advise against spending lavishly for any one piece, though. History has shown that most of these "one-of-a-kind" figures are actually produced in decent numbers and prices usually stabilize rather quickly after a new figure appears.

As for the figure itself, it is nicely done. Most of these alternate Asian figures are not quite "finished". They can have loose limbs and the paint jobs feel like they are not fully "sealed". So, the figures are not quite full production quality (though some are) and should be expected to live up to the same quality of a retail purchased figure. The paint is easily worn with only minimal effort and the plastic feels more brittle than on the production pieces. This Stalker is no exception. He is not quite the same quality as the retail Desert Stalker, but he is close enough that he still can be used along with my full complement of regularly released figures.

Aside from the skin color, this figure also has some other variances from the full production version of Stalker. Most notable is the differently colored belt, straps and chest holster. These are a grey color on the production figure while they are a leathery brown on the pre-production piece. This is significant because the other 5 figures from this set also have pre-production variants that feature this leather color on their details in lieu of the grey. It is likely that the leather color was the original choice but it was changed as it left too much brown on the figures. The grey, while not hugely different, was at least a break from the browns and tans that dominate these figures overall. The other major difference is that the Caucasian Stalker does not have the tattoo or patch on his right arm. It could be simply that this was not applied until later and this pre-production figure didn't go through that paint application. Or, the patch might have been a later addition to the figure. Either way, its absence makes the figure stronger. You can see a side by side comparison of the production and pre-production figure in the photos below.

The Desert Set was actually really bad. While a few of the mold choices were good, the rest were either repetitive or were simply so poorly contrived that there was no real way to justify them. While the desert camo portions of the figures were well done, they were not evenly applied. Stalker is the only figure in the set to feature a full body camo application. The other figures all feature half camo with the other part cast in an agave desert blue. While this color might appear in the desert, it does not do so in enough quantity to justify a person wearing it over 50% of their body. This approach left many of the figures in the set as less useful than they would otherwise be. (At the Convention, the desert Ambush figure was also shown in full body camo. Yet, all the production pieces were the two-tone versions.) As such, Stalker is the highlight of the set, even if both the retail piece and this pre-production version lack paint on his mustache.

Since there was really only one decent figure in the set, many collectors passed it by for Ninja or Operation Crimson Sabotage sets in hopes they would be able to pick up a discounted Desert set after the holidays. This was not to be, though, as most stores around the country sold out of these sets in the days after Christmas. This left many collectors shut out of the sets and you now see them actually selling for over retail on the second hand market. My opinion is that the only figures worth anything in the set were Stalker and Snake Eyes. And, now that the HAS set features the same Snake Eyes but in a non-desert version of the cammo, even Snake Eyes is less useful. So, it's not really worth dropping $30 on the set unless you're a completist. The Stalker is an amalgamation of the 1992 Duke with the 1989 Stalker's head. While the Duke body has been used multiple times since 2000, this is the first time it has been done in a nice desert scheme. This is also the first time this Stalker head has been brought back. While the head lacks the iconic Stalker beret, the stocking cap is a look that appeared on an equal number of vintage Stalker molds and is true to the character. The result is a nice update to a figure who works well in his specified environment. I don't mind repaints of major characters if they are done to fit within a theme. Having a Night, Arctic, Desert and Jungle/Forest version of a character allows me some range in their use. It's when they issue the same version in similar colors time and time again that the repetitiveness really starts to wear on me and my interest in a figure or mold wanes.

Of course, what is one to do with a Caucasian Stalker figure? In most cases, it's nothing more than a novelty. However, as this mold is just Duke's body with Stalker's head, there a few more possibilities. A quick headswap gives me a desert Duke. But, as this Stalker head is not as iconic as some of his other incarnations, I think this figure will ultimately end up as a new character. The blond hair is a nice touch as it opens this figure up to many more possibilities. I could even see me using this figure as Dusty at some point as the Dusty who was released in the desert set was so poor. Regardless, this figure works as both a novelty and as a practical addition to a collection. I'm just not fully sure of what that practical use for the figure will be yet....   If you know where to look, this figure can be available. While he isn't as ubiquitous as many of the other odd repaints we see from Asia, he is out there.

While it is an almost certainty that some of these unproduced figures saw production runs in the 1,000s (the Wal Mart parachute figures) and most probably saw runs in the high 100s, it seems this figure might be a bit more scarce than that. There are probably less than 100 of these currently out there. That isn't to say that more won't show up, though. But, at this time, this figure is probably one of the more expensive alternate Asian figures you can buy. My strategy with figures like this is to acquire them for a price that I find fair. I don't really worry about rarity as these are figures I'm adding to my collection: not my portfolio. So, I don't spend money on these figures like they are potentially valuable collectibles. It is a viewpoint that neophytes to the unproduced figure game should follow as there are many people out there who will take advantage of you and get you to overpay for what is, essentially, a common figure. In time, experience will lead you to better decisions, but the nature of these items is such that spending big bucks for figures like this is never a great idea. I spend an amount I'm comfortable with. If the figure turns out to be rare, cool. If not, I still have a neat addition to my collection that allows me to distinguish my Joe world from many other collectors'. 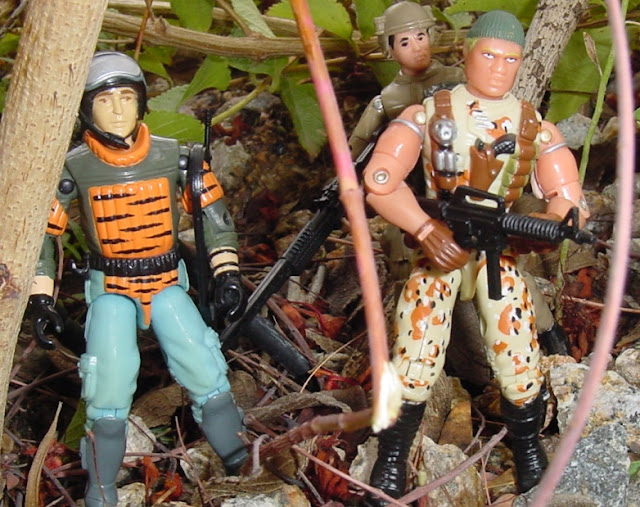 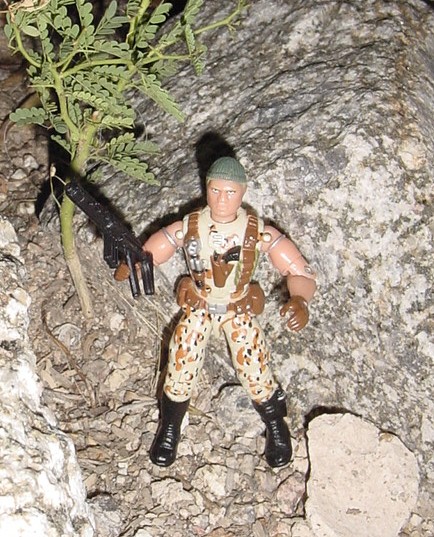 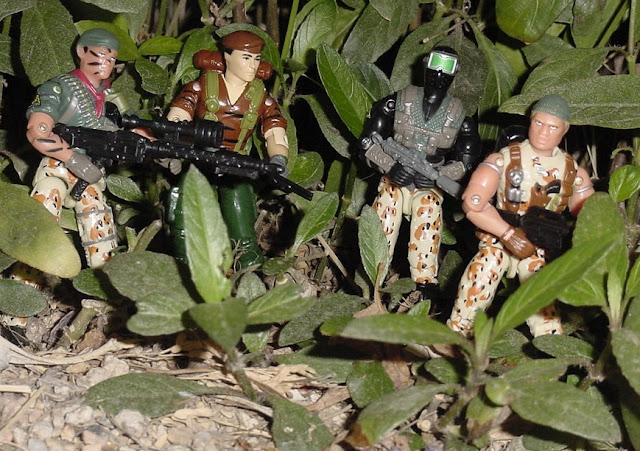 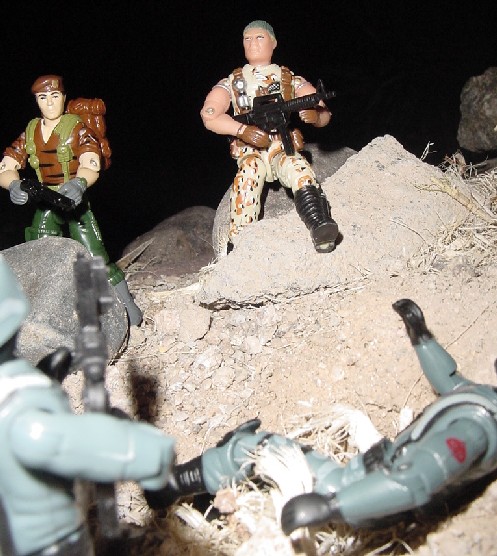 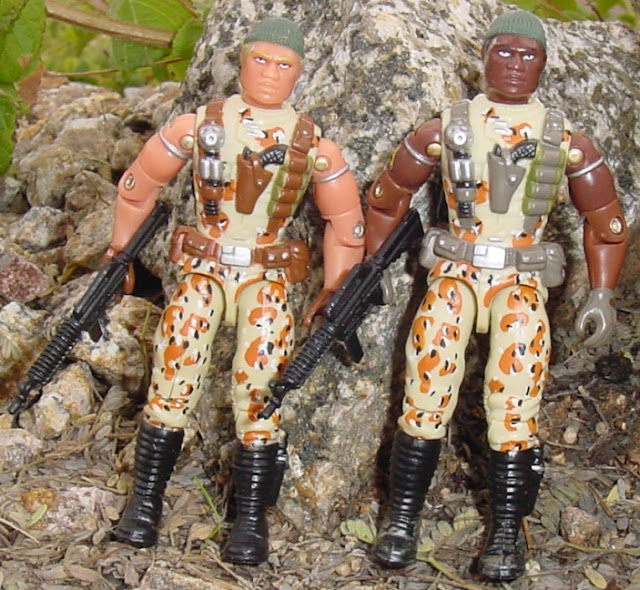